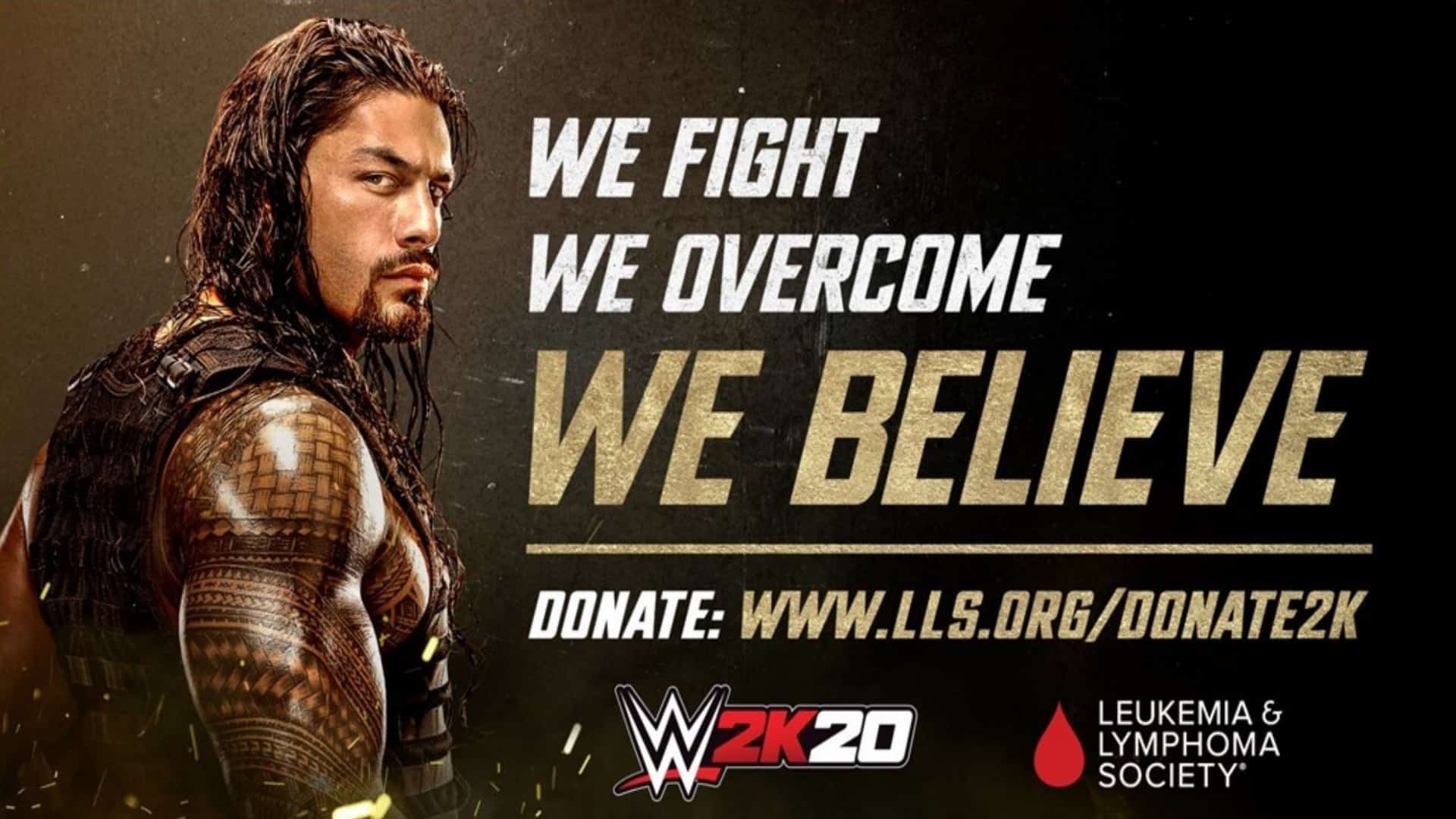 2K has announced today that the Company will partner with The Leukaemia & Lymphoma Society® (LLS) as part of its WWE® 2K20 global marketing campaign, to support breakthrough blood cancer research to advance lifesaving treatments and critical support for patients and their families. The partnership aligns with 2K’s selection of WWE 2K20 cover Superstar and leukaemia survivor Roman Reigns™, while delivering a ground-breaking new platform for awareness, education and support. WWE 2K20 is currently scheduled for worldwide release on October 22, 2019.

Utilizing its extensive social media presence, 2K will issue a call-to-action via the WWE Games Twitter account, urging consumers to retweet and spread the LLS message and donation link. For each retweet, 2K will donate $2.00 to LLS, up to $500,000.00.* Consumers will not be required to make a purchase or donation but will simply be doing their part to encourage others to get involved and consider donating, volunteering time or becoming a social ambassador. In addition to its financial commitment to LLS, 2K will also provide copies of Company-published video games to blood cancer patients, coordinate visits with 2K personnel and WWE Superstars to hospital partners of LLS, host LLS personnel, patients and their families at upcoming WWE 2K20 promotional events, and more.

WWE 2K20 will shine a spotlight on Reigns as part of its emerging 2K Towers mode. Now in its sophomore year for the franchise, 2K Towers invites players to take a WWE Superstar or created MyPLAYER into one of several different towers, each with a unique gauntlet of matches that boast different challenges, match stipulations and player modifications. In 2K Tower: Roman’s Reign, they will follow “The Big Dog” through his early days with WWE, including his time as a member of The Shield to his rivalries with Brock Lesnar®, John Cena®, Undertaker® and more. Overall, players will compete in 16 matches and live out key chapters in Reigns’ impressive WWE career.

“Partnering with The Leukaemia & Lymphoma Society, the global non-profit leader in the fight against blood cancers, is a natural extension of our WWE 2K20 relationship with WWE and Roman Reigns and an opportunity for us to give back to the community, raise awareness and join the fight to find a cure,” said Chris Snyder, Vice President of Marketing for 2K. “Roman’s strength and perseverance to win his battle with leukaemia is truly inspiring to all of us, and we are proud to feature him on both the cover of WWE 2K20 and through a dedicated 2K Tower celebrating his incredible career journey.”

“As an organization founded 70 years ago by a family who lost their 16-year-old son to leukaemia, we are committed to finding cures and helping families affected by cancer, through our investment in research, free patient support services and financial support, and by advocating for laws that provide access to quality, affordable care,” explains Louis J. DeGennaro, PhD, LLS president and CEO. “We are pleased to reach a new generation of families through this exciting partnership with 2K and we are grateful for their support of our quest to end blood cancers.”

Developed by Visual Concepts, a 2K studio, WWE 2K20 is rated T for Teen by the ESRB. WWE 2K20 is currently scheduled for worldwide release on October 22, 2019 for the PlayStation®4 computer entertainment system, Xbox One family of devices, including the Xbox One X, as well as Windows PC. For more information on WWE 2K20 and 2K, visit wwe.2k.com.