Tech rivalries are commonplace these days and if nothing else, are fantastic if you’re a consumer. These rivalries mean that companies try to one-up each other at nearly every turn while we, the consumers, reap the rewards of competitive pricing and innovative technology.

The rivalry between Nvidia and AMD in the GPU field has been raging for some time. One thing about AMD though is that they are well versed in tech warfare as they have been duking it out with intel in the CPU chip market even longer than they have been taking on Nvidia.

To me, AMD seem more like the company willing to push boundaries and think outside of the box in the pursuit of better performing, better priced products. My introduction to AMD was many moons ago when I upgraded from my intel 486-DX2-66 to an AMD 586-P90. From there I went on to use AMD over intel for many, many years. This choice was made on the bang-for-your-buck way of thinking.

Jumping forward to 2020, I still use AMD over intel when it comes to CPU’s. At work, I run 4 x 32 Core Generation 3 Threadrippers & 1 Gen 2 (2990WX). At home, A Ryzen 9 3900X. The grunt these chips offer at the price point they sit at, just is not matched by intel at this current moment.  This is all only one person’s opinion of course. AMD is simply going from strength to strength in the CPU market.

In the GPU field however, I think they may have some work to do.

First impressions were pretty good I must admit.

Here is my test bench for this review:

Here is the benchmarking run

I did play a bunch of other games just because I curious like that, but to go into the details on each one would have you reading this for the next week!

Ease of use:
Both control panels can be installed in the video driver bundle. Both use hot keys for easy access during a game. Both update the driver as new versions are released, and both allow easy in-game recording and streaming on the fly.

When you open up the Nvidia panel, you are presented with a number of different options and preferences allowing you to set custom hotkey’s, set recording quality and save location, streaming quality and service, driver download preferences and optimise your gaming library on the fly or automatically.

Opening the AMD panel presents you with all the above and a truckload more. From within the panel you can overclock or undervolt your GPU, view recorded gameclips, check your playtime and average FPS on each game you have played, view any hardware recommendations for your favorite games, and even enable screen resolutions well over and above your native res that are actually usable.

From there, you move to the settings section of Adrenaline and here you are presented with a truck-load more settings. 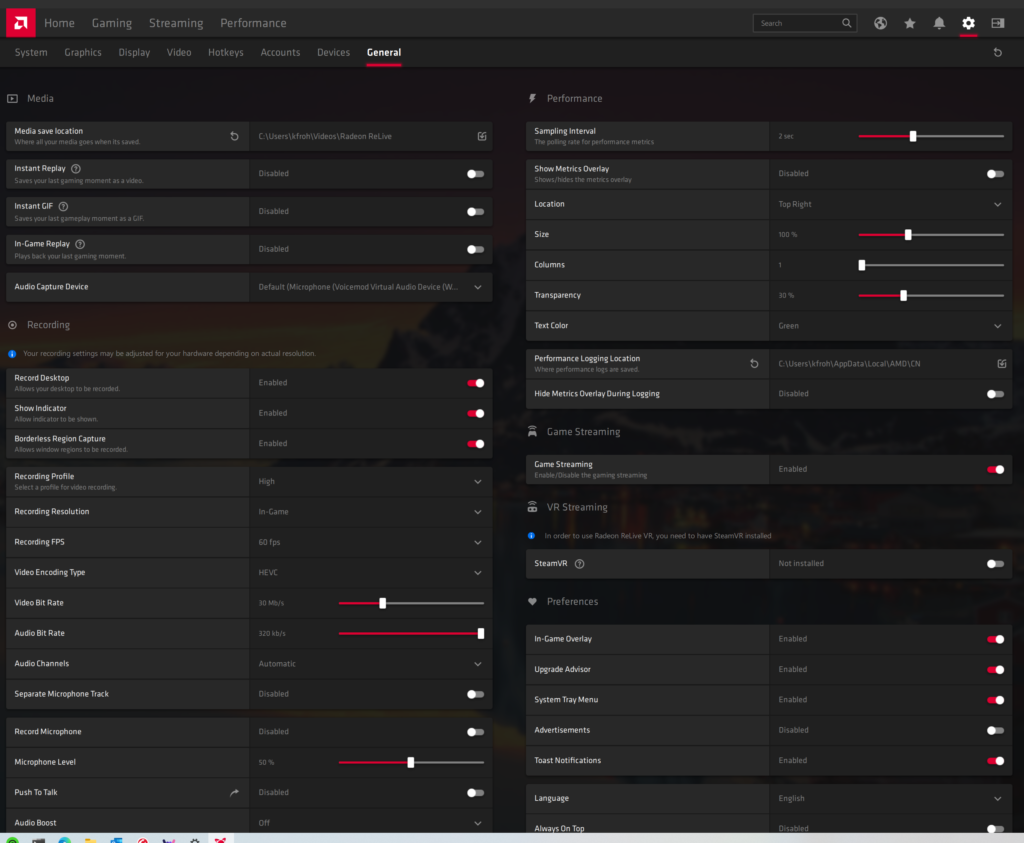 Comparatively, The Nvidia GeForce Experience feels almost naked with available options and settings. Your settings here consist of recording and streaming locations and output settings, keyboard hotkeys and your saved video and image gallery. That’s pretty much it.

Admittedly I felt almost like AMD offered way too many options when I first opened up the control panel. I was so use to Nvidia as my usual GPU at the moment is a RTX2060 and before that was a 1660Ti, before that, a 1080, before that, dual 970’s…. you get the picture. I have always been in Nvidia’s camp and I will elaborate on that at the end of this review.

After spending the best part of a month with the AMD GPU in my PC, I have gotten use to the sheer amount of options and adjustments available that I find Nvidia’s offering very lacking… on the software side. 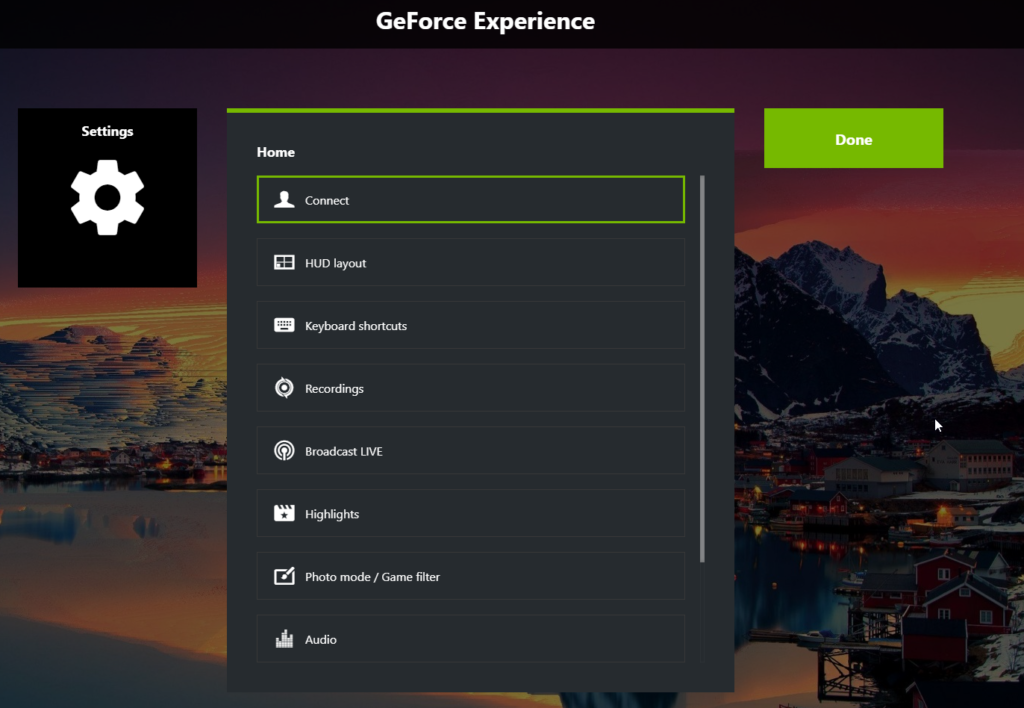 As my RTX2060 is not the “S”uper version, some might say that I am not comparing apples with apples. Maybe I’m not as the 5600 is the XT version, slightly overclocked from the base chipset. No matter what one thinks, it is still fun to play some of my favorite games on both cards.

Straight up I will tell you that the frame rates between the 2 cards did not differ greatly or more to the point, they both ran high enough frames in most recent games that most of us wouldn’t notice without a counter on-screen. There are always exceptions to the rule though, but this is mostly related to ray-tracing on the RTX and no ray-tracing on the RX.

Playing Mechwarrior 5 which is ray-tracing compatible, the 2060 bogs down at an average 38fps. Turn that option off, and up to 78fps we go. Remembering this is all done in 1440p at the highest possible graphic settings the game will allow.

“But the 2060 has ray-tracing” you say… Even the 2060S can struggle to hit 60frames, even in 1080p, for most games that are compatible. Ray-tracing puts an enormous amount of stress on the GPU and unless you are using a 2070S or higher, I am not using ray-tracing as a selling point for Nvidia at this level.

Assassin’s Creed Odyssey, Control & Detroit: Become Human all made the 5600XT earn its living the hard way when pushing the graphics settings all the way up to a thousand!

All 3 games had a rough time of holding on to 60fps. Detroit is capped at 60fps by default unless a game file is modified. I set this to unlimited and only on some occasions did I see anything much above 60fps but when it did, it would hike up to 80+fps.

Odyssey is deceivingly detailed. I figured an older game would easily hit 100fps but 58fps was generally the norm with this one.

With my graphic settings dialed up to the max and the resolution at 1440p, Control certainly took control of the AMD RX5600XT GPU. With an average of 38fps, I could almost hear the 5600XT whimpering from my PC case. Dialing back the visuals 1 notch, 70fps was then commonplace and visually, I noticed no difference.

Fallen Jedi easily hit the 100fps mark regularly during gameplay and happily averaged almost 99fps when pushing the visuals through the roof.

I had 2 ring-ins for my line up. Titanfall 2, simply because I like the game and World Of Warships because I play it regularly.

Titanfall 2 had no problems staying around 120fps while WoWs (with the game system file modified to allow above 75fps) hardly dipped below 165fps.

By now you will have realized that I do not throw a hundred different tech stats and numbers at you when giving my opinions and outcomes of a GPU like most of the rest of the reviewing world does. This is because sometimes I even struggle to work out what hardware I should spend my hard earn money on. 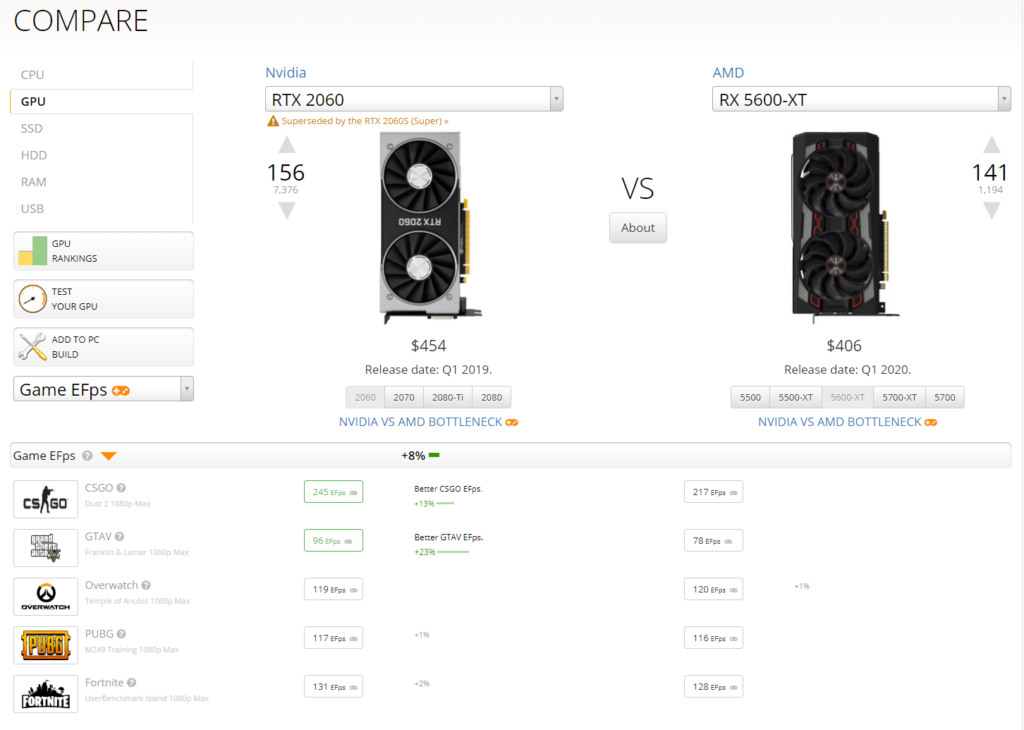 The 2 biggest differences between the 5600XT and 2060 really boils down to Ray-tracing and die size. Nvidia has ray-tracing, AMD does not. AMD manufacturing process die size is 7nm while the Nvidia is 12nm. The smaller die size means more power packed in the same overall space on the die.

I am going to come out and just say what I think a lot of gamers think when seeing numbers like this… I DON’T CARE!

Well, I mean, I do… but what I really want to know, not as a professional gamer, but rather as a gaming enthusiast who still loves smooth gameplay and pretty graphics; but also has bills to pay and kids to feed… I want to know which GPU will give me the best performance and value for my money!

If you fall down that rabbit hole of numbers and stats as an average gamer like me, you can easily end up either spending way too much moolah, or buy something that you are simply not happy with.

Forgetting about the marketing spec sheets for respective video cards and knowing what I know right this moment, if I had $639 to spend on 1 of these cards mentioned, I would buy the 5600XT.

Ray-tracing is really a non-issue for this comparison. The 2060 and the Super version, just don’t offer enough muscle to make ray-tracing properly usable for most compatible games.

AMD seems to have always had an uphill battle in both the CPU and GPU space. They have always been the underdog. Times are changing though. The Ryzen 3000 series CPU’s have taken the gloves off and are giving intel some cheeky jabs proving that AMD is perfectly capable of offering superior performance at a wallet friendly price.

The RX5600XT is touted by AMD as the “Ultimate 1080P Gaming” and it is for that reason I spent my time with this GPU pushing it to its limits in 1440p. Every game I played in 1440p was easily playable with visual settings pushed up to the max. Yes, some games did only just push up past 30fps, but mostly I found 60fps up to 80fps was a commonplace for this GPU that is seemingly undervaluing itself. Admittedly, playing these same games in 1080p did allow the frame rate to easily and just about always smash 100fps right up to a consistent 160fps and beyond even when playing current AAA games.

The Radeon GPU’s have always lagged behind Nvidia for one reason or another, this could possibly be said even right up to the last generation of RX cards. The new generation of NAVI hardware making its way out of AMDs camp needs to be taken seriously, all the while putting Nvidia and intel on notice.