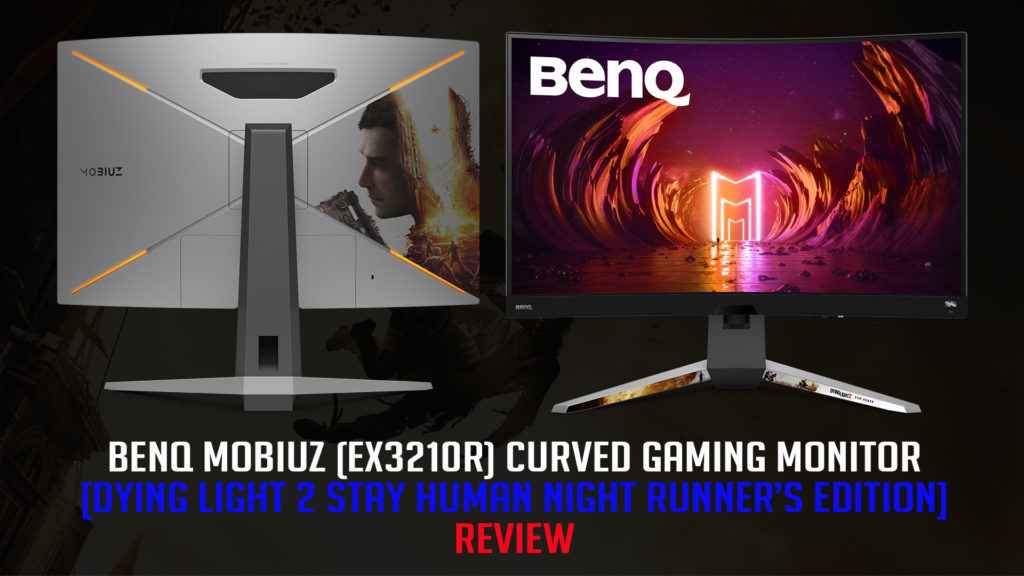 Some people, like myself, somewhat wrongly assumed that a 4K monitor would be great for gaming. Sure, they’ve got the resolution, but unless you’re willing to spend a significant amount of money, you’ll quite often be locked at a 60Hz refresh rate, and unless you’re prepared to dish out for an OLED, more often than not, the colours aren’t as good as they can be.
BenQ has given us the opportunity to test out the MOBIUZ EX3210R Dying Light 2 Night Runner Edition Curved Gaming Monitor, a Quad High Definition 31.5” screen designed exclusively for gaming that features new HRDi technology. Now, you may already be familiar with HDR, or High Dynamic Ranges, being the ability to more accurately display light and dark tones, but what is HDRi?

In short, HDRi is a technology that uses a barely noticeable sensor to intelligently adapt the monitor to the lighting conditions present, reacting by adjusting the brightness and contrast to maintain optimal clarity and fidelity. For us, this means that we won’t strain our eyes so much, making for a much more comfortable gaming experience, and this was especially noticeable while the monitor was positioned next to my normal, non-HDR capable monitors, as they had a particularly dull appearance under my normal ceiling light, something I hadn’t really noticed until I sat typing out this review.

With three HDR settings, the MOBIUZ EX3210R can be adjusted to best suit the user and what they are doing. The first, and probably most obvious setting, is standard HDR. It simply sets the brightness and contrast to a better-than-normal setting, providing more vivid images with a better colour range. This alone looks significantly better than my stock monitors, but it really isn’t why we are here. 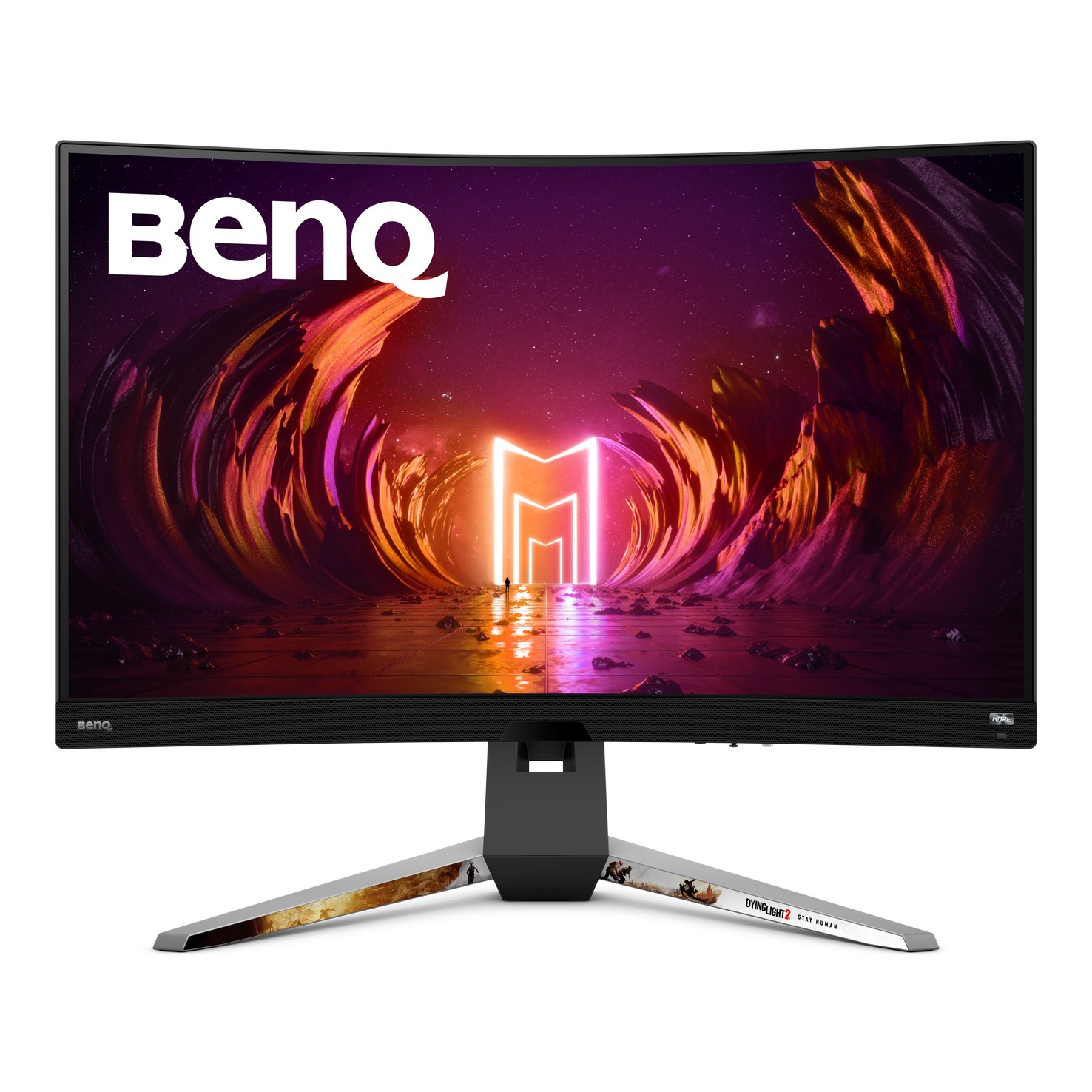 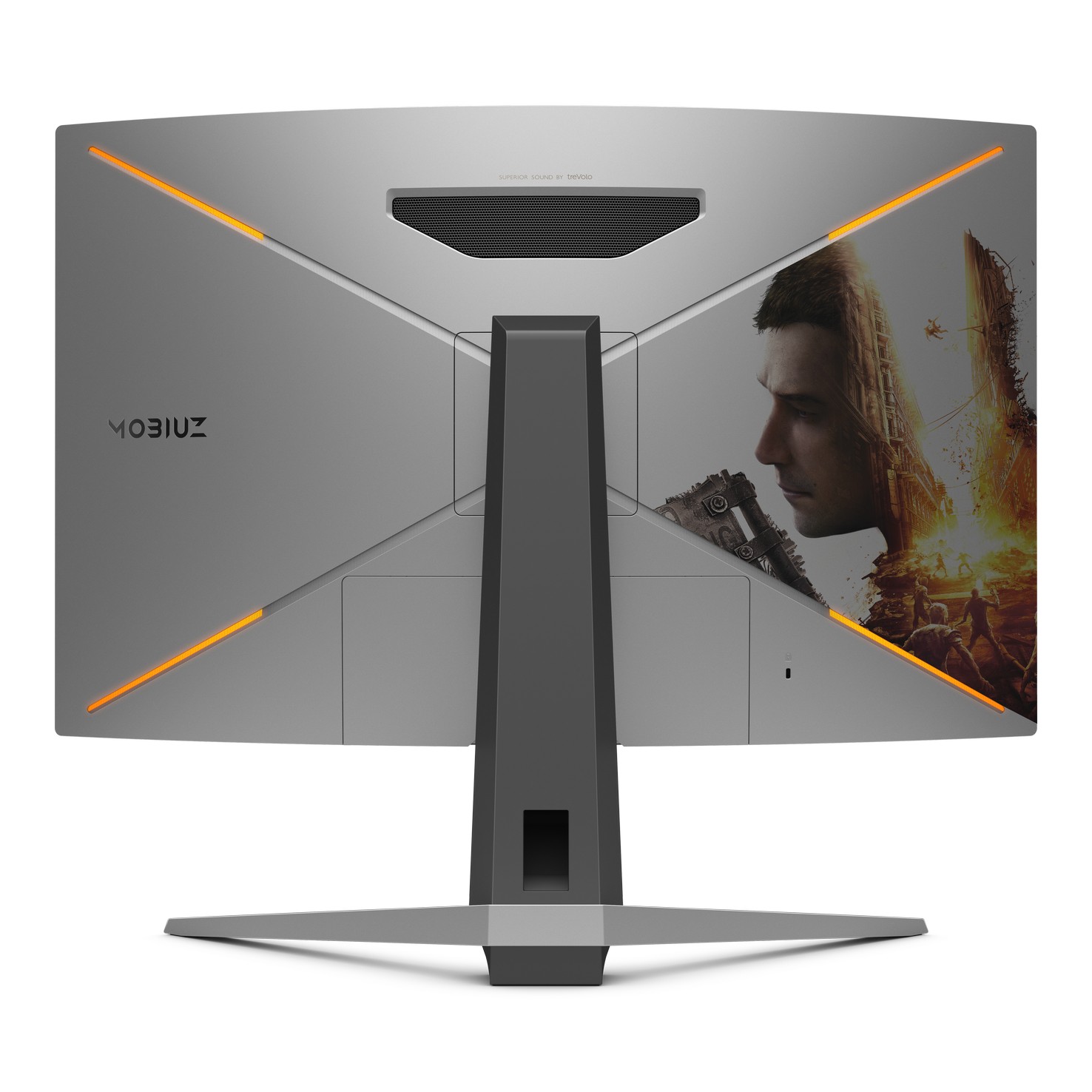 The second option is Cinema HDRi, and to me, it more readily resembles what you’d experience at the cinemas, which likely has something to do with the name. Everything seemed brighter overall, with the exception of the darker scenes, which still allowed for a significant amount of detail to be displayed in the shadows – it really was like sitting in my own personal cinema and watching the season finale of The Book of Boba Fett.

Being a gaming website first and foremost, however, the real treat came when I flicked over to Game HDRi (See video below) and gave the monitor’s namesake a run for its money – the post-apocalyptic Dying Light 2: Stay Human. The screen initially appeared slightly darker, but once the game started rolling the cutscenes, colours popped and looked more realistic than ever, while the shadows sent chills down my spine. Creeping around during the night sent shivers down my spine as I squinted to try and make out the horrifying details found throughout the devastated city, while the creatures leaping out of the darkness looked so real I let out sounds that I am not particularly proud of…

Given the current situation with graphics cards, there are bound to be a few of us who do not have access to HDR-capable graphics cards, but BenQ has come to the rescue with the MOBIUZ EX3210R Dying Light 2 Night Runner Edition Curved Gaming Monitor, as it is more than capable of emulating the three included HDR modes. While not quite as good as when HDR is truly enabled, these emulated modes still looked significantly better than what my standard monitors are capable of, and the 165Hz refresh rate is an absolute must in my opinion. Even pushing my graphics settings to the point I could only obtain 30FPS during a game, the pictures stayed crisp while the motions were perfectly smooth, and with raytracing enabled, I could have sworn I was right there in Aiden’s place. 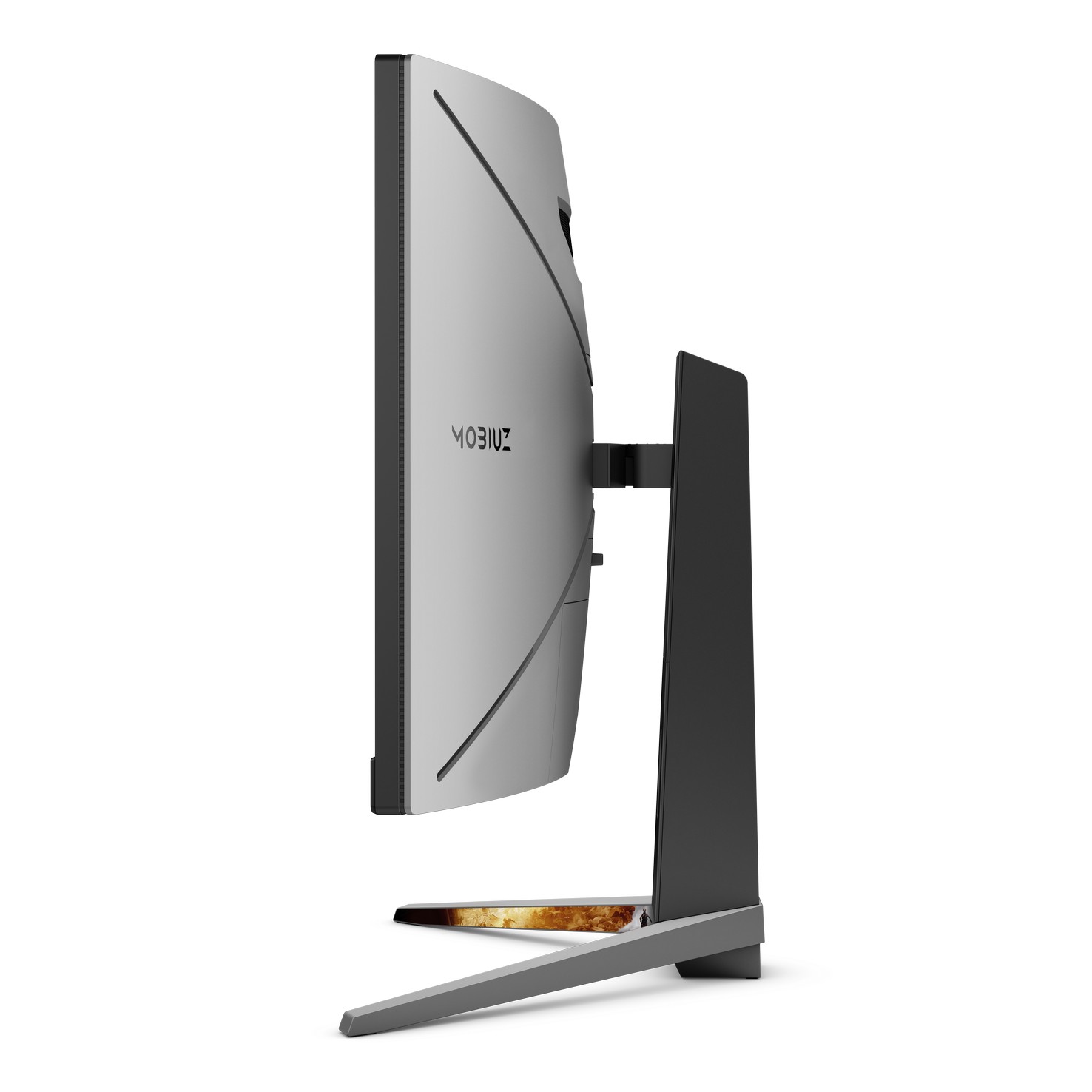 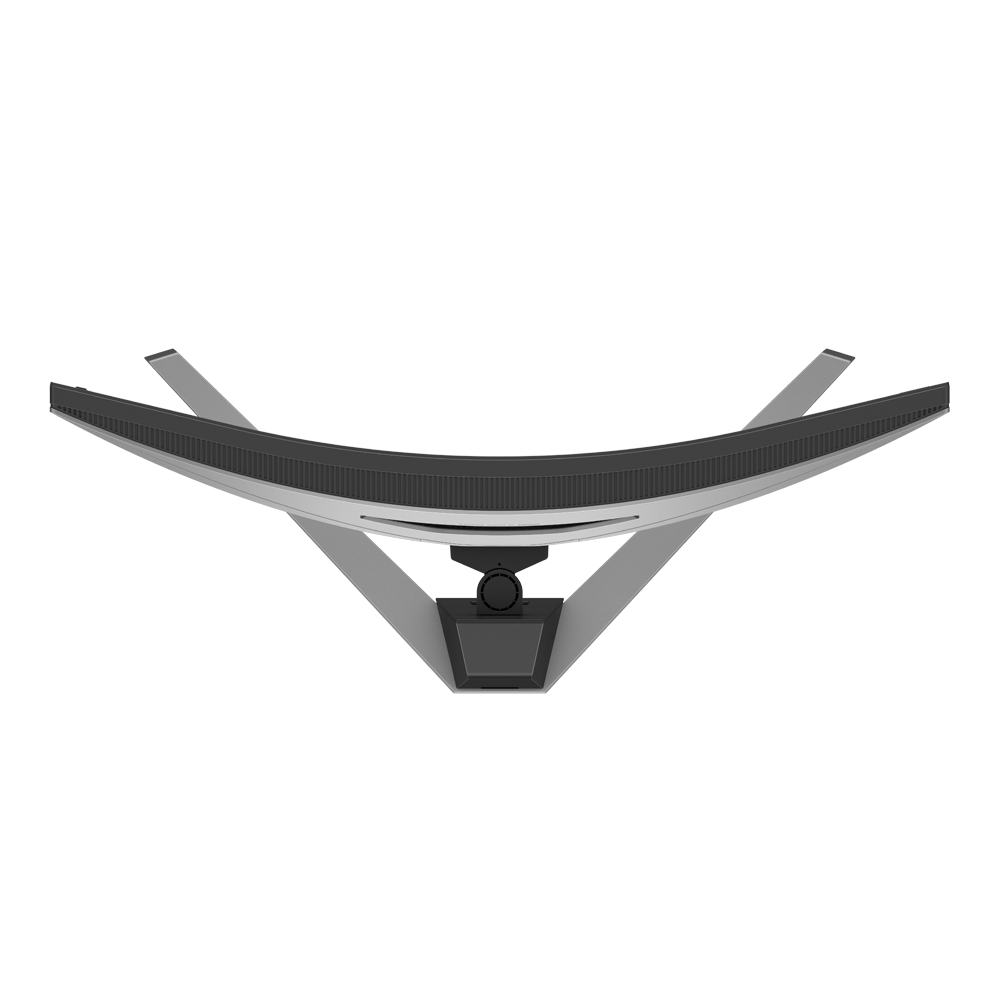 The BenQ MOBIUZ EX3210R Dying Light Night Runner Edition Curved Gaming Monitor features everything you’d find on the standard edition, including 2 HDMI ports, a DisplayPort, built-in treVolo speakers, a USB3.0 port, and a headphone jack. It even houses a 5W subwoofer in it! What sets the Dying Light 2 Night Runner Edition apart from the standard version, however, is the gorgeous Dying Light 2 graphics located on the rear and on the player-facing side of the stand. As large and as heavy as this beast of a monitor is, the stand allows the user to effortlessly glide along the vertical supports to lift or lower the screen position, while the 2-axis connection point is a breeze to turn or tilt the monitor to suit your positioning, and all of your cables can be tucked away tidily within the stand to avoid pinching and pulling.

If you’re anything like me and you have the patience of a zombie horde trying to force its way into a house full of tasty and screaming occupants, you are currently able to buy the original version of the MOBIUZ EX3210R through BenQ’s Australian website, and in terms of specs, it is identical. On the other hand, if you can wait it out, the BenQ MOBIUZ Dying Light 2 Night Runner Edition is set for release early – mid-March, and not only will your patience be rewarded with some beautiful artwork, but you’ll be able to redeem a bonus PC copy of Dying Light 2: Stay Human. All you need to do is register your interest through BenQ’s Australian website, and they’ll keep you in the loop!

There is no denying that the BenQ MOBIUZ EX3210R Dying Light 2 Night Runner Edition Curved Gaming Monitor is the best monitor I have had the opportunity to try out. The 2560×1440 QHD resolution is more than enough for gaming, regardless of whether or not the game is 4K capable, and the 165Hz refresh rate well and truly makes up for those times when the FPS drops below 60. The HDRi settings allowed me to spend more time in front of my screen without feeling like my eyes constantly had to adjust, and the overall experience has left me seriously considering how much I really need to eat for the next few weeks. Even one would be enough, but to have two, side by side, is now my dream.