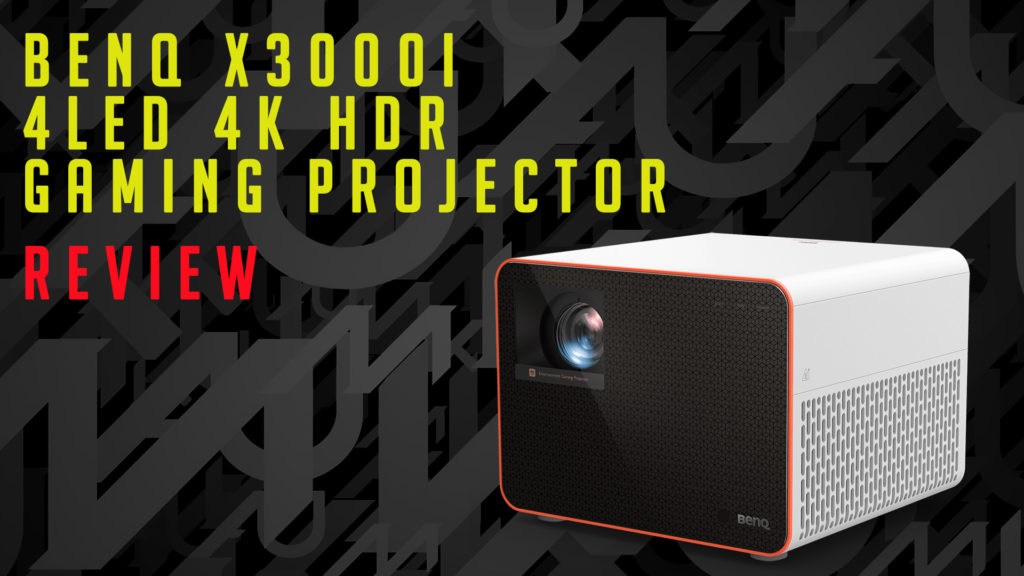 I rarely go to the cinema, but when I do, I can’t help but wonder how much fun it could be to plug my Xbox into the projector and play on a giant screen. The issue is, at least with my limited experience, is that spread over such a large area you’d miss out on a bit of the finer detail, depending on the game of course. When it comes to home projectors, they typically require a whole lot of space, and it’s rare to have one that will offer incredibly crisp detail, so again, it hardly seems worth it.

It seems to me that BenQ have similar feelings when it comes to an in-home cinema-like experience, and they have created the world’s first 4LED, 4K HDR gaming projector – The X3000i. Unlike some projectors that are currently on the market, the BenQ X3000i 4LED 4KHDR Gaming Projector is a little bigger than some people might expect to see, but this is due to the amount of technology that has been crammed into it, and the first thing we need to address is what they mean when they say “4LED.”

Simply put, it means they use 4 LEDs to produce the light to be able to project the image, and for this particular projector, this is set up in an RGBB fashion – Red, green, blue, blue, and this differs even more so from many other projectors, in that they often use 3 LEDs and strangely in a red, green, green fashion, but one of those green LEDs has a special coating on it that makes it register as blue, and this is done to help with the brightness. Of course, this is all far too technical and not overly relevant to this review, but if you would like more information on the process, BenQ explains the difference in greater detail here. When it comes to the BenQ X3000i 4LED 4KHDR Gaming Projector, a second blue LED is used to help bring up the brightness, and this, in turn, means that the system will ensure consistent colours and brightness for longer periods of time – potentially up to 20,000 hours.

One of the biggest draws to the projector is how little space you need in order to set things up, and as my gaming setup is in a fairly small room, I was very pleasantly surprised with how big I was able to get the projection, as well as how simple it was to set up. The supplied Quick Start Guide provides a detailed template on measurements to get your preferred screen size, and the BenQ X3000i 4LED 4KHDR Gaming projector will readily project anywhere from a 60 to a 200-inch screen with a little over 5 meters distance between the “screen” and the projector. With the space I have available, I was able to project a 60-inch screen onto my wall, with the projector a hair over 1.5 meters, and the results were fantastic! Combining this technology with DCI-P3, HDR-Pro, and BenQ’s dedicated gaming display modes, this provides wonderfully vibrant and accurate colours with deep shadows and near-true blacks, so it’s almost like playing on a high-end monitor. 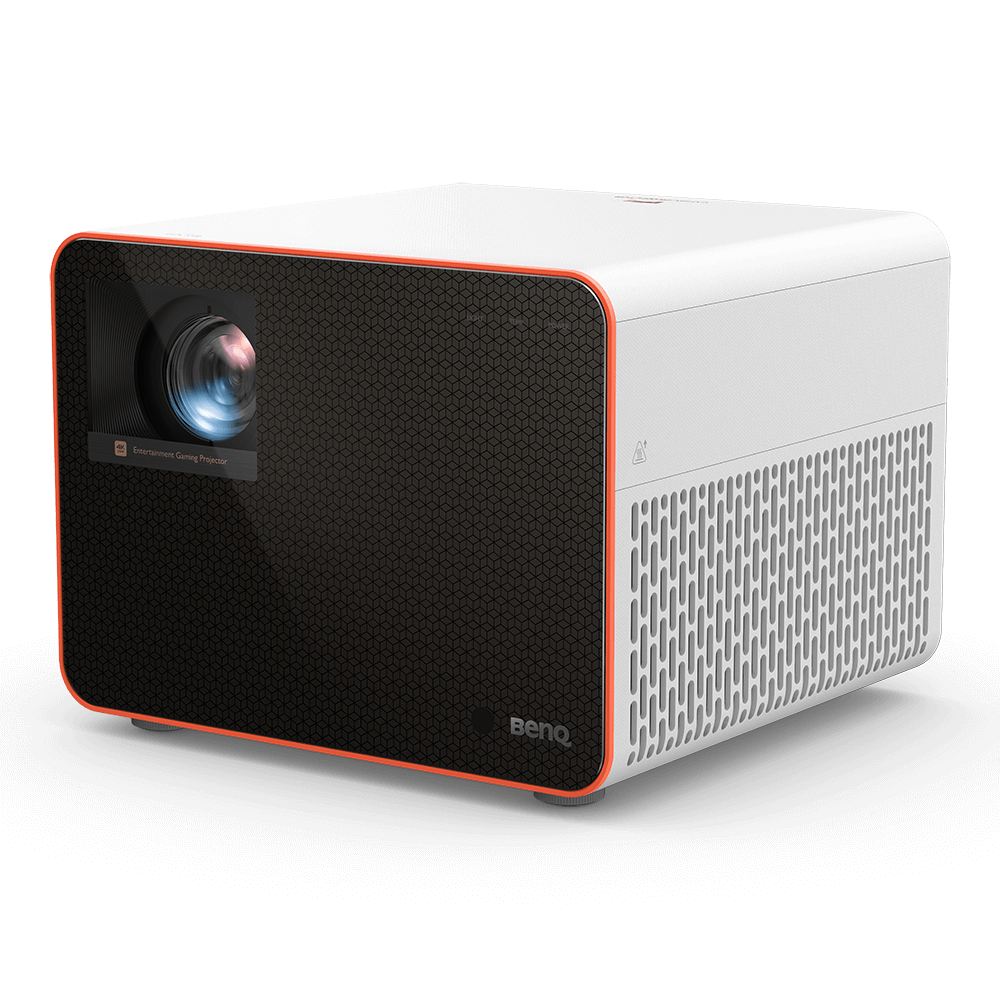 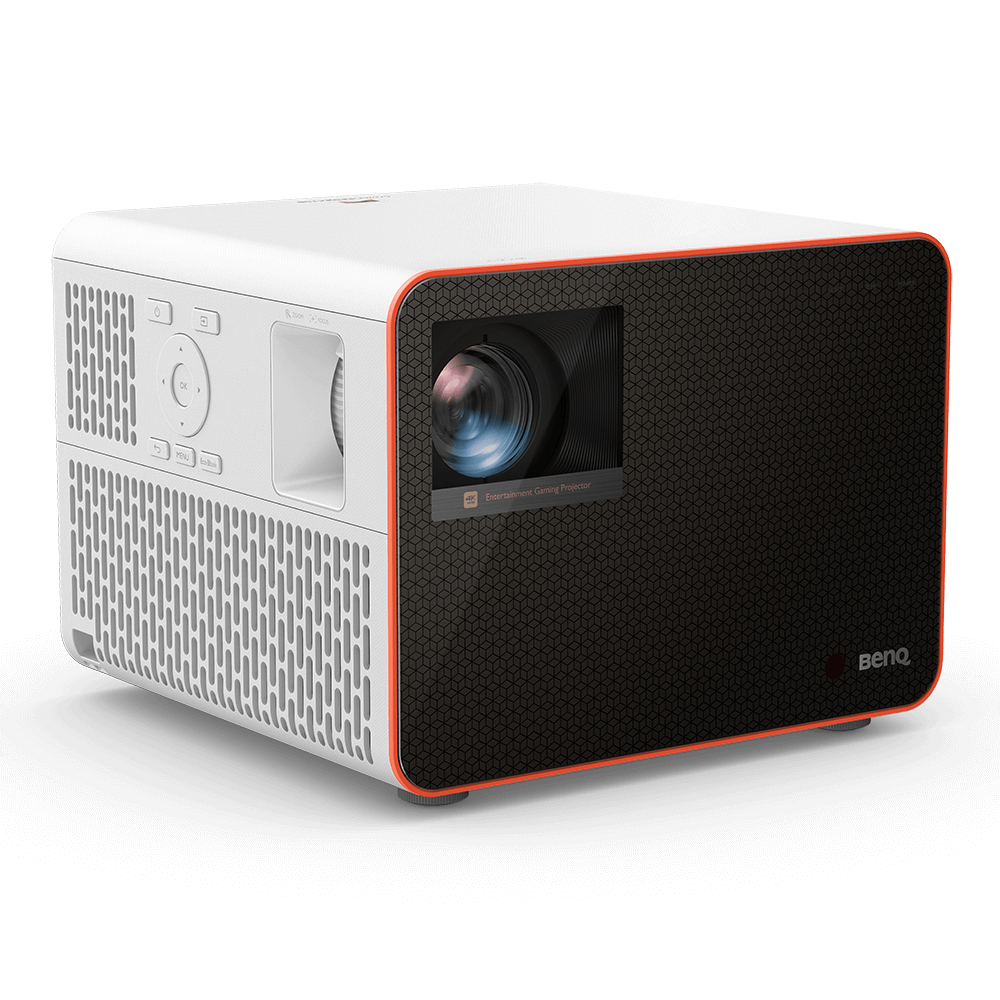 Set up is a breeze, and the bare minimum you’ll need is a free wall, the projector and its supplied power supply, and an HDMI cable for your preferred console or PC. It is practically a case of plug and play – though there will be some tweaking required to properly focus the image and make sure it isn’t skewed. While most settings can be adjusted using the supplied remote, Zoom and Focus will require you to make use of two sliders, and these are located on the side of the unit next to a handy set of onboard controls. Additionally, should you be unable to get the projector high enough to properly display an image, there are two detachable feet that can be adjusted for the perfect angle. If you’re lucky enough to live in a house with a dedicated cinema room, the unit can also easily be mounted to the ceiling, so you won’t have to worry about having a table taking up part of your floor space.

In total, there are two HDMI ports on the back, one of which makes use of the ARC system most TVs will have these days, and for the average user, there is a 3.5mm Audio output or a SPDIF optical audio connection to plug in external speakers. For slightly more advanced purposes, the system also features a 12V Trigger port, a 2.5A USB-A port, and an RS-232 socket.

Aside from “just being a projector,” the BenQ X3000i 4LED 4K HDR Gaming Projector comes with its own built-in 5W treVolo speakers, and they get the job done. Using Bongiovi DPS technology, they are capable of producing an emulated 3D surround sound experience, so they’re not terrible in any sense of the word, but they certainly aren’t as punchy as a dedicated sound system. If you are really searching for those ground-shaking explosions or the deafening hum of an aircraft’s engine, you’ll be wanting to make use of the SPDIF connection mentioned earlier, with its Dolby Atmos 7.1 channel pass through and dedicated BenQ audio modes.

It also comes with an Android TV, and fortunately for me the previous tester had already installed it, but once again, this is incredibly simple, as you need only undo two screws, slot off the top panel and insert it into the dedicated USB port. The Android TV will then give you access to all the apps you could ever want, just by using the remote control the system comes with, so you won’t have to fiddle around with your phone or another external device. 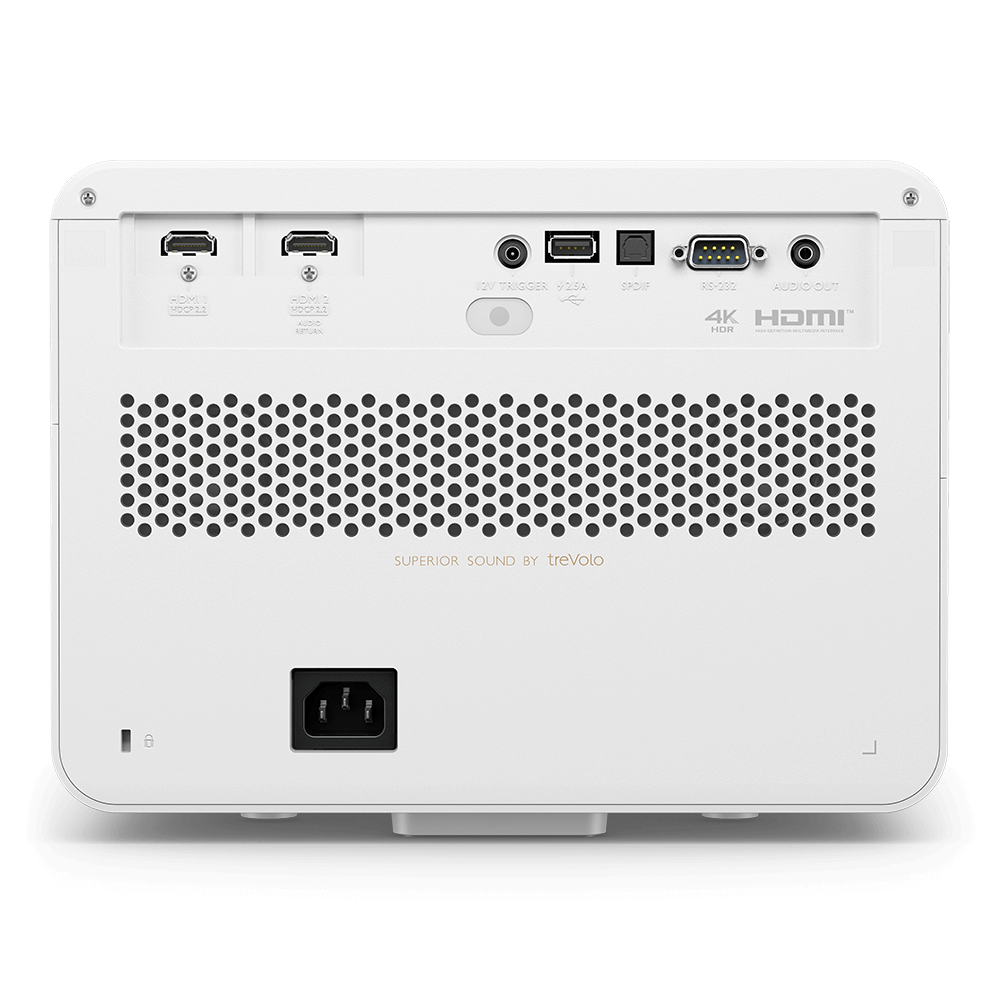 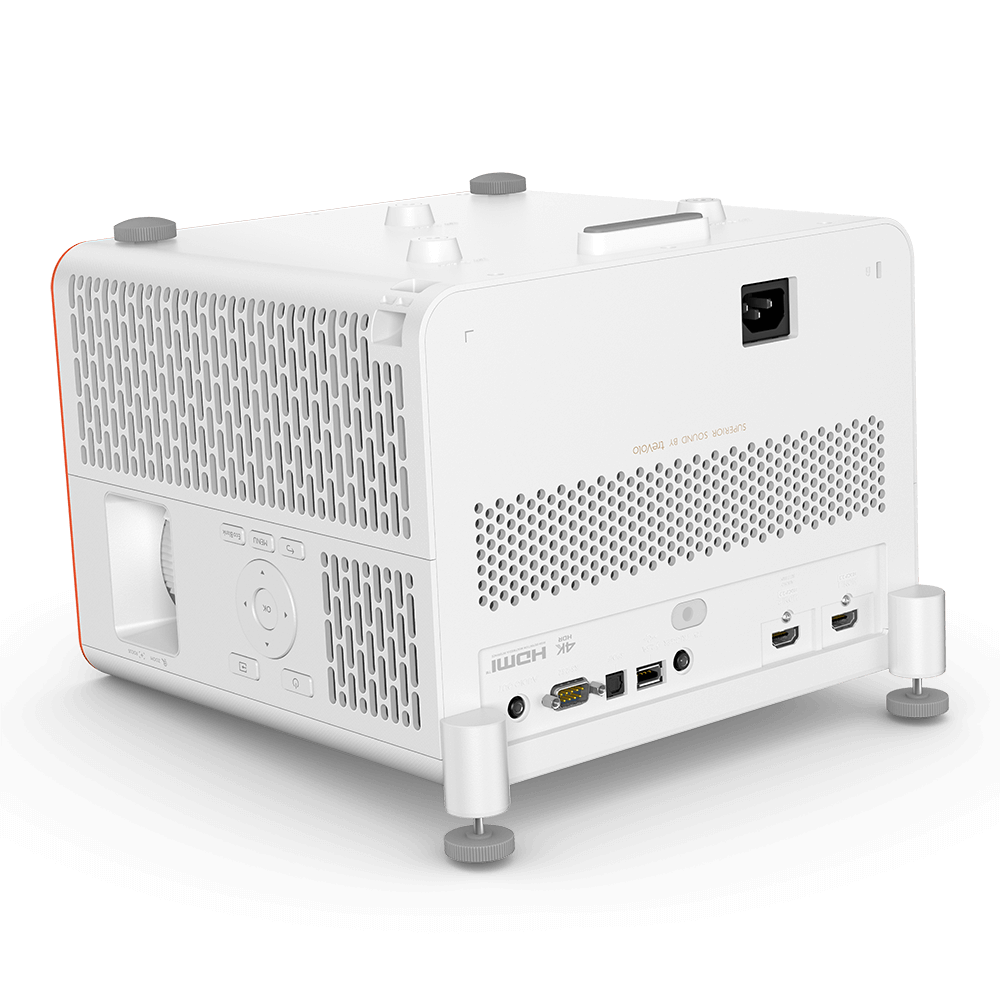 These features are all well and good, but the BenQ X3000i 4LED 4K HDR Gaming Projector boasts up to a 4k resolution, and sure enough, it is very capable in this aspect, but not everyone is wanting to play in 4K, with many people preferring a higher refresh rate than fancy looks. BenQ has you covered with this, and while playing at 4K, you can expect to experience 60Hz with a 16ms response time, which for anyone but the most hardcore of competitive gamers, will generally be very suitable. If you need the extra frames though, you can drop it down to 1080p for 120Hz at 8ms, or even 1080p at 240HZ for an incredible 4ms, offering results that will rival a lot of monitors out there.

One thing to keep in mind is that this is a projector, so regardless of the 4LED system in use, there are external environmental situations that will affect how the final image is presented. There is a reason that cinemas use a projection screen and turn off most of the lights when you’re about to watch a film, and the BenQ X3000i 4LED 4K HDR Gaming Projector is much the same. For best results, you’ll really want a room that blocks out a lot of light, and you’ll want space for a screen, but this isn’t to say that you’ll need them. A simple white wall was all I used, and closing my curtains and turning off the lights I have set up was able to provide a display that I was more than happy with.

To give the projector a bit of a workout, I tested out a few games, but focused a little more on the open-world side of things, given this is one of the major selling points. Star Wars: Fallen Order was the first cab off the rank, given it is still one of my favourites and probably the last decent title EA made. The saber combat was incredible to watch, my walls flashing red and orange as I swung my lightsabre to deflect laser bolts, and the characters looked as good, if not better than the cinemas. I slowed things down a little with some Minecraft as well, thoroughly impressed with the detail the projector was able to put out. Elux II was next, being one of the newer games I had on my console, and once again, the world was vibrant and filled with incredible details. The only game I really had an issue with was Star Wars: Squadrons. The characters looked great, sitting in a cockpit looked incredible, and the gameplay was wonderful, but the backgrounds tended to have blocks of colour as opposed to smooth transitions. This is no fault of the BenQ X3000i 4LED 4KHDR Gaming Projector – I notice this on my normal monitors. It’s just significantly more obvious when the screen takes up half your wall space.

Regardless of whether you’re using it as a gaming projector or you want to set up your own home cinema, the BenQ X3000i 4LED 4K HDR Gaming Projector will provide fantastically fluid motion and a projection system that boasts a significantly longer lamp life than anything currently on the market.