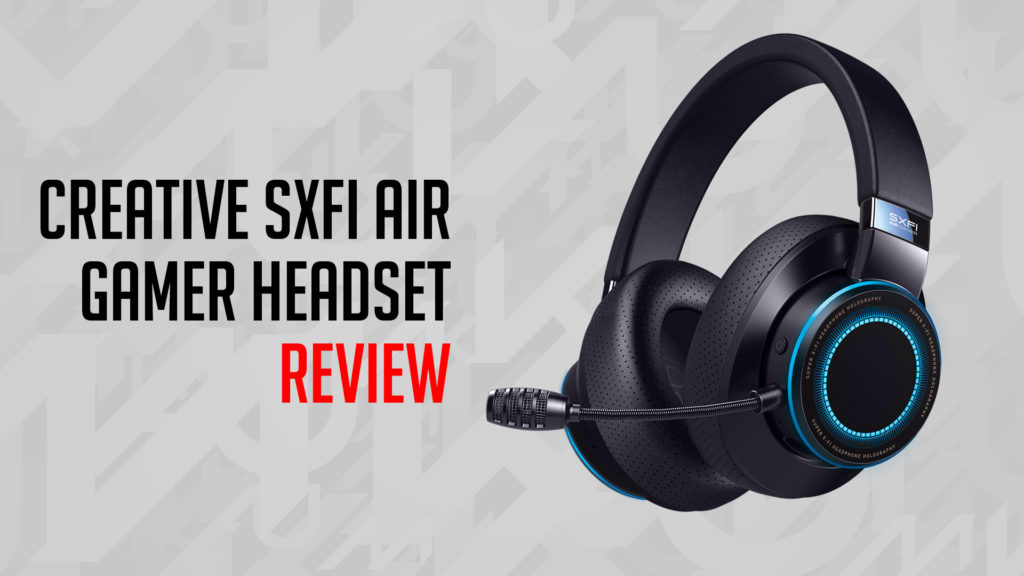 I’ve always been a little sceptical of devices that cram several functions into one such as multifunction printers. The way I saw it, if the one part fails, the whole device is then practically useless. I figured you’re better off having individual items that do their own tasks so that you simply replace one cheaper item instead of a whole device because one part of it isn’t working. If I needed it, I would have preferred to have had a printer and a separate scanner, and this is generally how I’d explain things in my old nine to five job. The Creative SXFI Air Gamer Hybrid Headset is an interesting one, in that it does exactly what I used to avoid – it serves more than one purpose.

What do I mean by that? It’s just a headset. Well, yes. Yes, it is, but it’s also so much more, hence the hybrid. The first, and probably most noticeable aspect of things is that it has several different audio inputs; USB-C, the standard 3.5mm headset pin, Bluetooth 5.0, and finally, you can plug in a micro SD card and use it as its own media player. That’s right. Fill up a memory card with music, and you won’t need another device to play your favourite tunes. Each audio input serves its own particular purpose, depending on what you’re trying to achieve.

The USB-C connection allows you to connect to any USB-C capable device, such as a Nintendo Switch or a PC, and this is also how you’ll get the best quality audio out of it. When connected to your PC via the USB-C cable it can make use of 7.1 surround sound, and combining this with the “Battlemode” preset, activated with the push of a button, you’ll hear every footstep and gunshot, allowing you to hear enemies and work out their positions long before they see you. This isn’t as good when connected to a Nintendo Switch, for somewhat obvious reasons, but the built-in UltraDSP Chip will still greatly enhance your listening experience compared to practically any other headset you can think of. 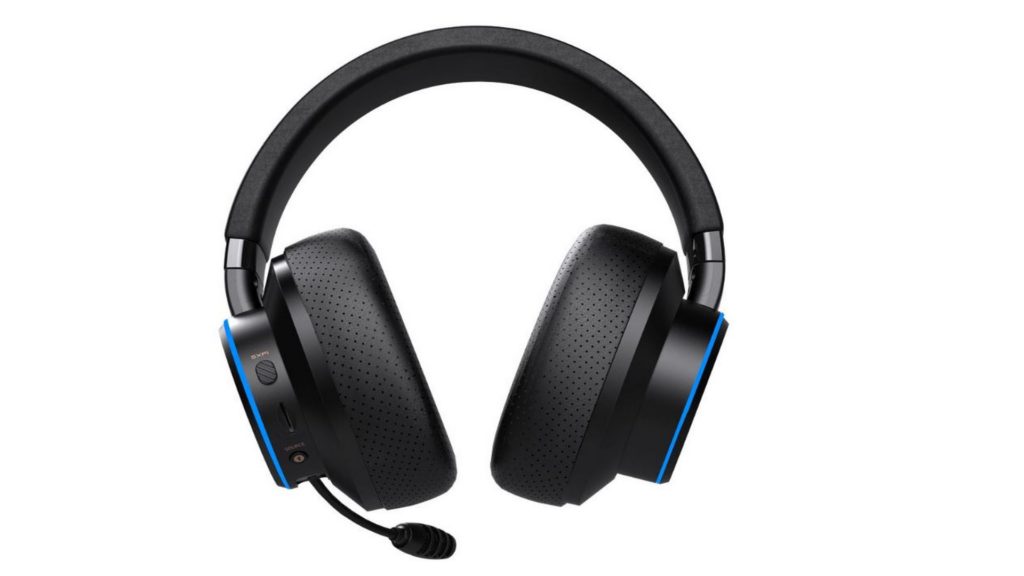 Bluetooth 5.0 will allow you to connect to your mobile device, enabling you to make and receive calls and listen to music or other media, such as movies. I was also able to connect it to my PC in this way, though as would be expected, there was an ever so slight delay in what was going on screen side. Most people wouldn’t want the boom mic sticking out in front of them if they were using this as a Bluetooth headset though, so luckily, the boom mic is removable, AND it can be replaced with either a plug or the supplied NanoBoom mic. This handy little microphone still gives some great quality audio, particularly during phone calls, and it is barely noticeable once connected.

The final way to connect another device is via the aforementioned 3.5mm headset pin. This is for some of your more simple devices, like your Xbox controller, but the sound quality is still right up there, once again thanks to the built-in UltraDSP Chip. What is an UltraDSP Chip though? DSP Stands for Digital Signal Processor, something that is inside pretty much every piece of audio technology you currently own. It allows your phone to decipher MP3 files and react to your voice commands, such as “Hey Google.” The Super X-FI is this, but better. Ultra-better in fact, and combined with the SXFI App available on the Play Store or the Apple App Store, it allows the headset to take all of the audio coming in and just makes it sound so much better.

Even outbound audio (your voice) is made clearer, and the “normal” boom mic supplied with the headset is wired to account for this. Called the CommanderMic, it features an integrated pop filter and SFXI inPerson Microphone technology. This helps with isolating external noises and captures your voice in a way that sounds more natural, which for streaming purposes is fantastic, but it significantly helped when communicating with my ARMA unit about enemy positions in our custom PVP maps. 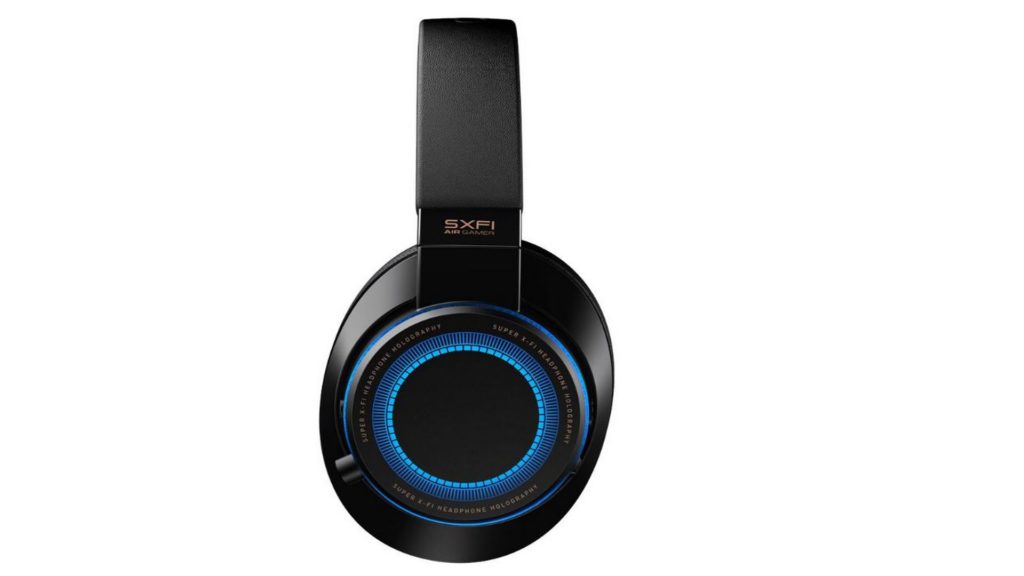 Some of us are old enough to remember the old vinyl records and cassette players, but I’m willing to guess that a high number of readers will only remember as far back as iPods and MP3 players. I mentioned earlier that you can fill a micro SD card with music and plug it in. The Creative SXFI Air Gamer Hybrid Headset has a built-in MP3 player, and this is easily controlled by the touch sensors located on the left ear. You guessed it, it sounds fantastic, and why wouldn’t it when Creative is the producer of some of the world’s best PC soundcards, the SoundBlasters.

With all this wonderful technology crammed in, you’d think it’d be quite the heavy headset, but it is so comfortable I’m almost considering putting aside my earbuds and using this instead. The oversized ear cups are made out of a perforated leather filled with a lot of cushioning. They allow your ears to breathe properly, allowing air to flow and keep your ears cool and sweat-free, but they hold firmly onto your head and help to block out external sounds. The headband is nice and flexible, and once again makes use of the same memory foam used to fill the ear cups, meaning I barely felt it on my head.

There are two apps suited to this particular headset; the previously mentioned SXFI App, which is the simpler of the two, and SXFI Air Control, which offers a little bit more. Both apps will take a “map” of your head to help them set up the headsets properly. This wasn’t exactly easy to do alone, so I do strongly encourage you to use a mirror to do so, or better yet, get someone to do it for you. I will admit I am not 100% sure what this map does, but I assume it has something to do with working out how to broadcast the sounds to better suit your head and ear shape – kind of like how some soundbars use a microphone to correctly reflect sounds off walls and give you proper surround sound. Both apps also have an equalizer that allows you to set up tones the way you like them, or to show you exactly what premade setting you’re on. The SXFI Air Control app also gives you access to the RGB lighting located on each ear cup, allowing you to change the lighting to whatever colour you want, but I couldn’t find anything that allowed me to have the colours cycle. Oh well. Perhaps a future update will give us this. 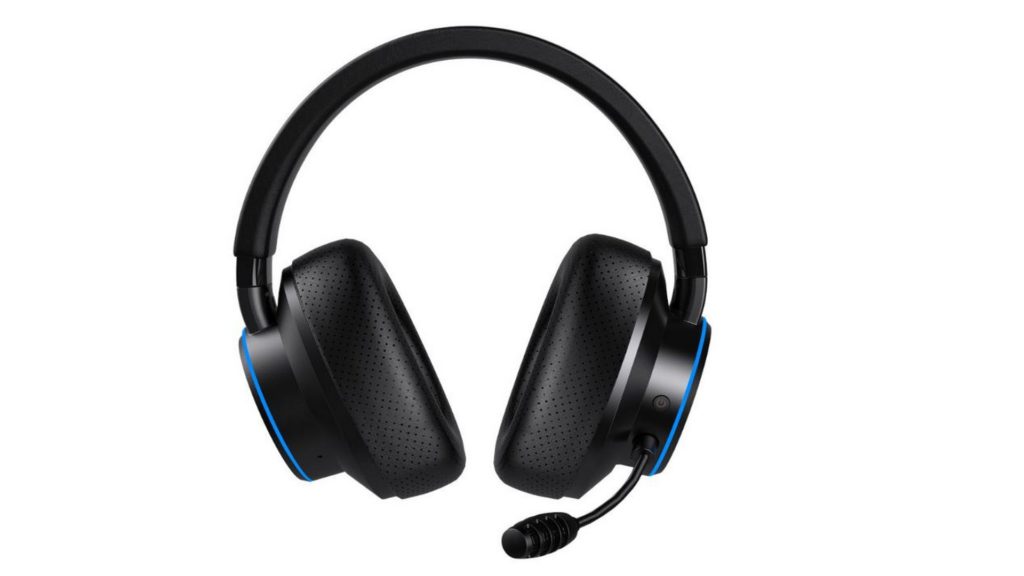 Regardless of which app you use, the headset does already come with a few pre-set adjustments anyway; Battlemode, which as I said before, helps you to pinpoint enemy locations. Super X-Fi on makes use of that UltraDSP Chip, really helping to belt out music and movie audio, and Super X-Fi off basically just turns it into a normal, everyday headset, but why would you ever want to use this? Scrolling through the inputs, you’ll also find a “Gamer Chat” option, which combines Bluetooth and USB inputs. The USB input focuses on in-game audio and your chat program, while it is assumed that you’re using the Bluetooth connection to stream audio from another device, and you’ll adjust the volume levels on the respective devices to find that perfect balance.

There were unfortunately a few small downsides to the Creative SXFI Air Gamer Hybrid Headset, though these are things that can be easily overcome. The first issue I had was with the length of the cables supplied. While using these on Switch or Xbox wasn’t an issue, I found them to be too short for my PC setup, and this would be even more apparent for someone who had their PC below their desk. I had a spare USB-C cable laying around, so a simple swap was all it took. The second, and slightly more annoying issue was with the SXFI App. It was easy to use and the equaliser worked a treat, but I really would not bother using its media player function. It struggled to play anything with clarity using the app’s media player, almost like it was having issues playing the files. I did the usual troubleshooting, like reinstalling and checking for updates, but in the end, I just used my phone’s media player and the connection was perfect.

I remember looking at the box, thinking that the brand looked familiar, but I wasn’t able to put my finger on it. It was so ingrained into me that Creative made world-leading soundcards that it didn’t click that there were other things that they could possibly make. The Creative SFXI Air Gamer Hybrid Headset is yet more proof that they know what they’re doing when it comes to audio, and not just when it comes to gaming. Whether you’re stalking your enemy on the battlefield, watching the latest action movie, or jamming along to your favourite musicians, the Creative SFX Air Gamer Hybrid delivers powerful sounds, making you feel like you’re right there. I’ve changed my mind about multifunctional devices, and Creative were the ones to do it. 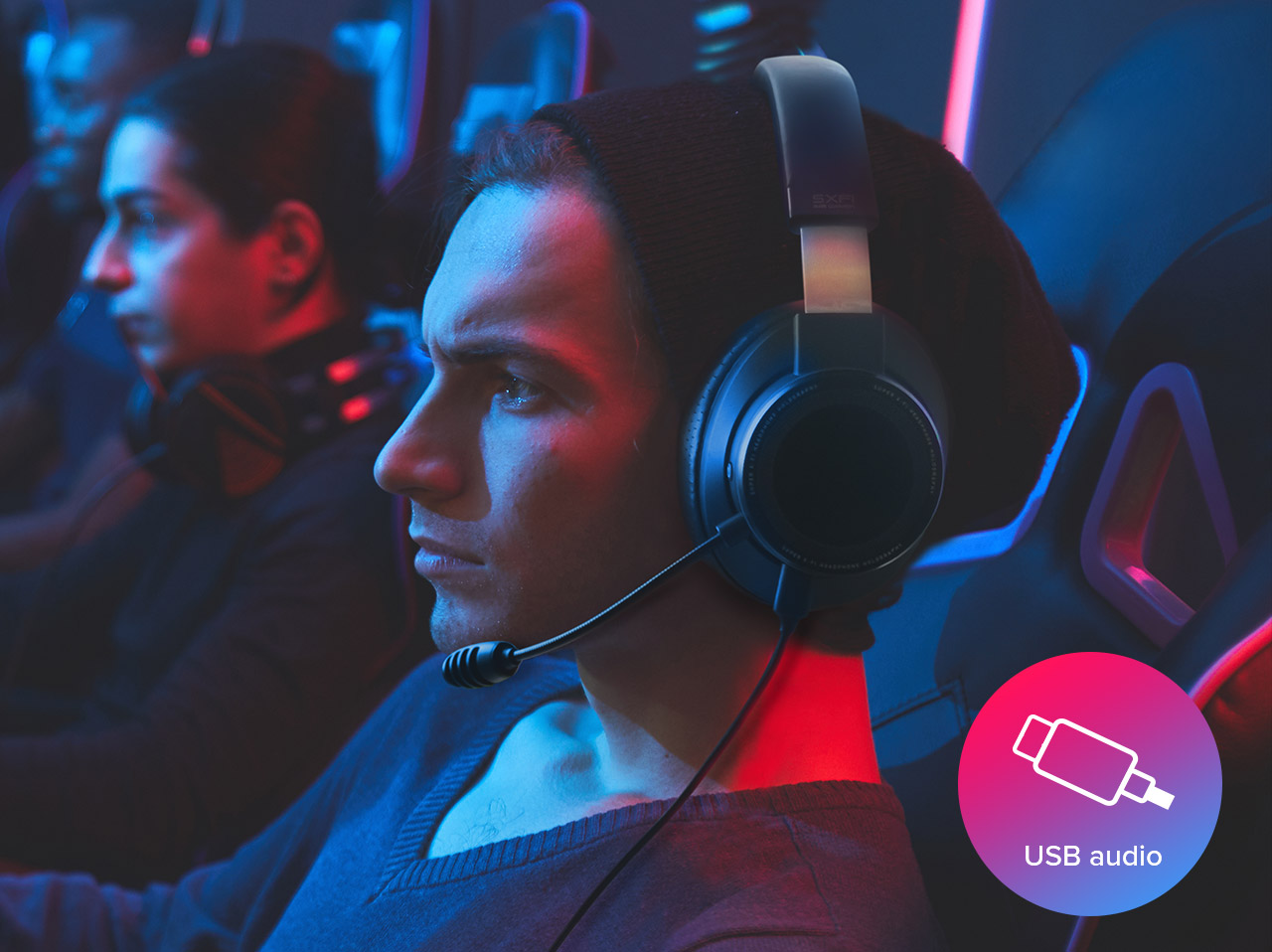 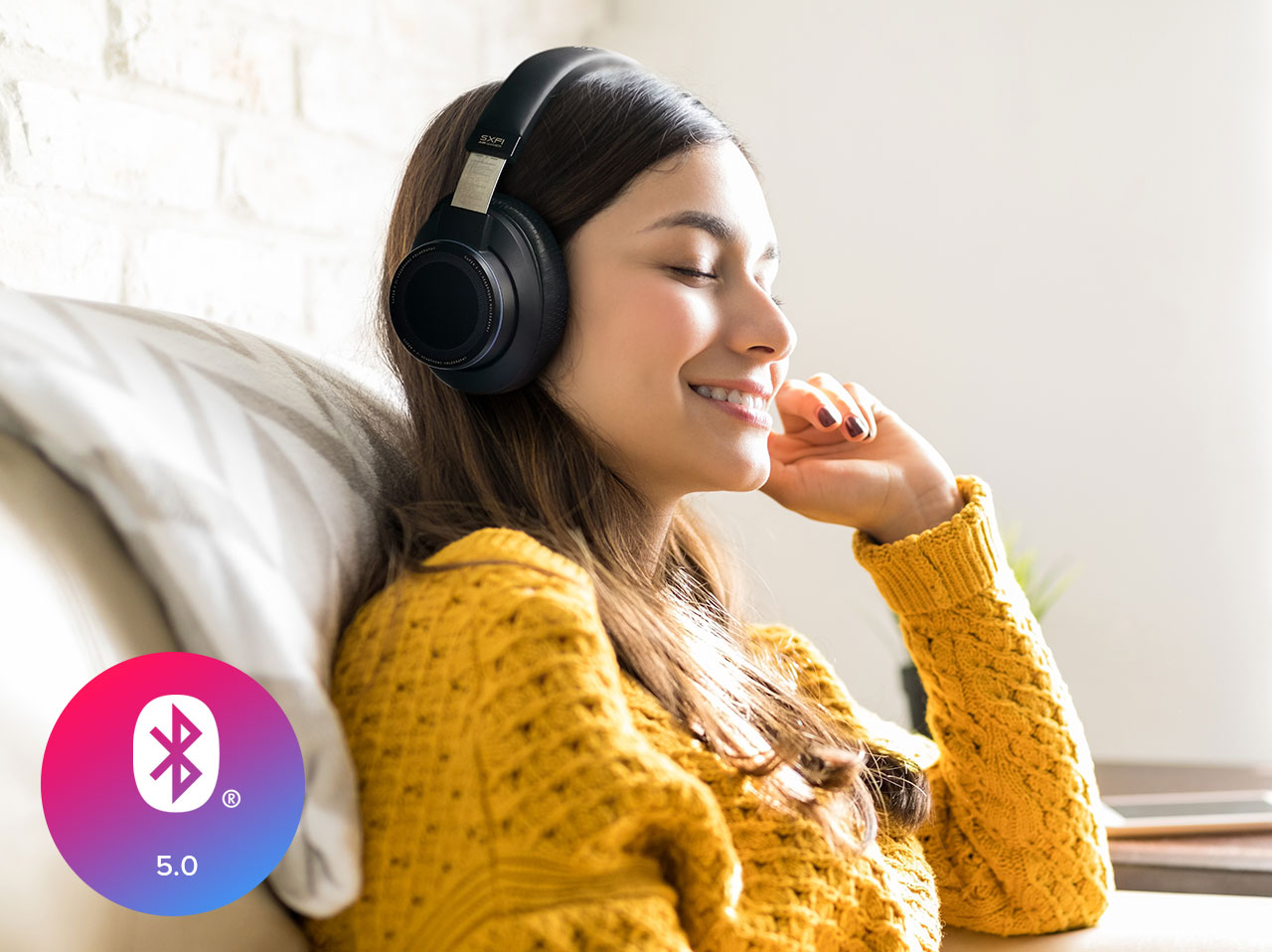