By Mathew Lindner on September 20, 2021 on Hardware, 2 More
close [x]
Tweet
No Comments 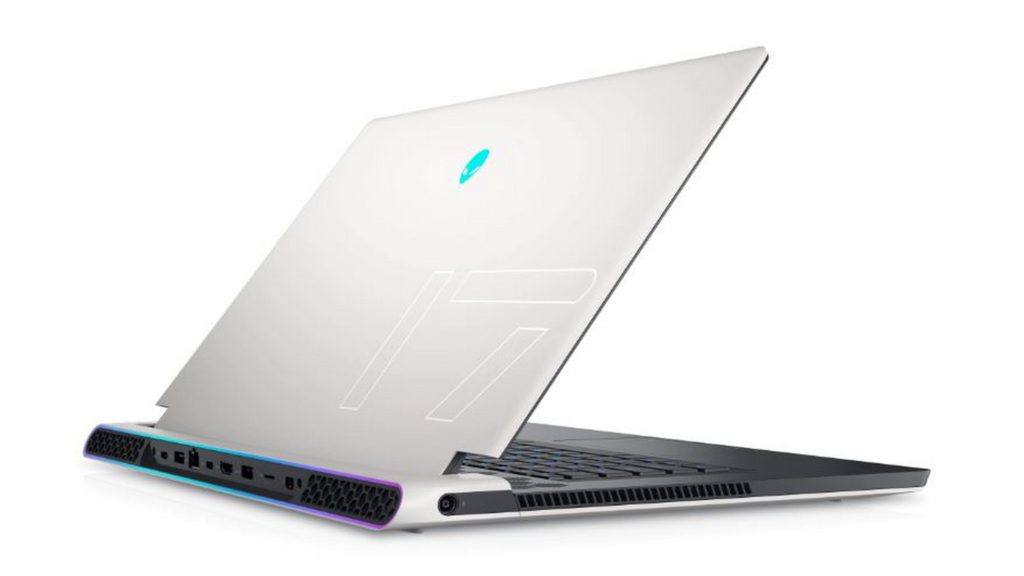 My first ever laptop was an Alienware X17, and I was so excited when I came home to find the package sitting by my door that I nearly snapped my key off in the lock. A part of Dell, Alienware feature a very distinguished design that really sets them apart from the rest, and the number of options available when ordering a new one will surely have you wondering if you really need that extra kidney. Eight years later, and I’ve once again been given the opportunity to relive that glorious day, and the brand new Alienware X17 R1 is sitting comfortably on my desk, begging me to put it through its paces.

The unassuming black box that holds the beast within leaves a lot to the imagination, but once we break the seals and crack it open, a beautifully simple white box greets us, an elongated oval has been cut out, and a silver alien head sits proudly towards the top, instantly recognizable as the Alienware logo. As we fold the covers out from the center, the X17 logo sits proudly on the back of the screen, together with yet another alien’s head symbol.

This particular model follows Alienware’s newer direction, featuring a Lunar Light colour scheme, which I was originally concerned about due to the nature of lighter coloured laptops often proudly displaying grubby fingerprints and other forms of discolouration, but this has been coated with a High Endurance Clear Coat, specifically designed to resist such blasphemy. They’ve also moved the default lighting to a cool blue colour, moving away from the more traditional black and green scheme people are so familiar with. The bold and aggressive lines that I was expecting are also not as prominent on the new Alienware X17 R1, with the bulk of the build featuring smooth curves. It’s not until we open the laptop up that we find the contrasting black keyboard and a honeycomb grill covering the speakers. 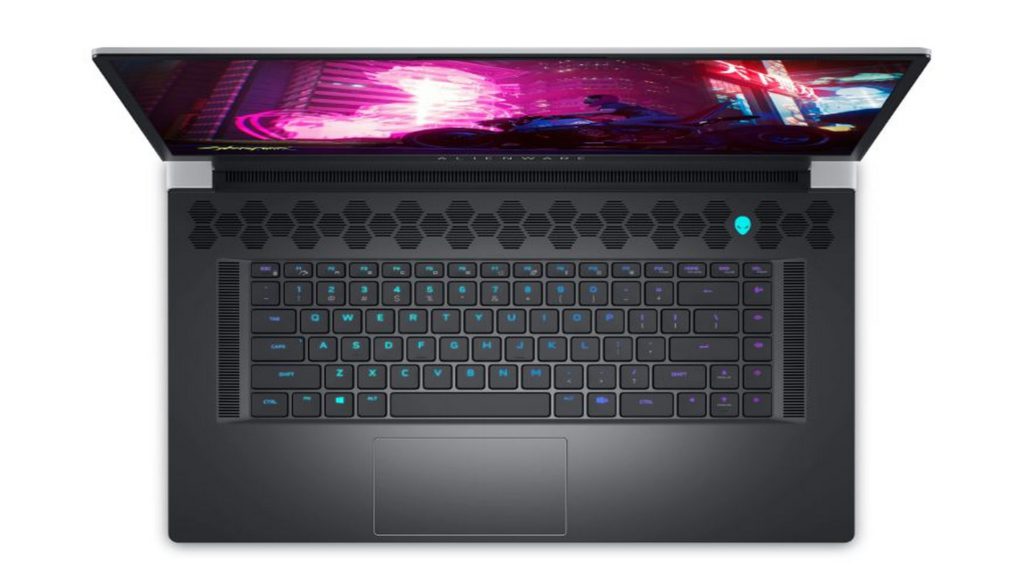 The standard laptop keyboard, trackpad, and Alienware logos, located just above the keyboard, with another located on the back of the screen can all be adjusted to whatever colour or pattern takes your fancy, all through the included and easy to use Alienware Command Center. This is also where you’ll want to change your power settings, as they seem to overwrite the standard Windows Power Management controls, and if you’re feeling a little more confident in your abilities, the Fusion section of the Alienware Command Center will allow you to overclock your CPU and GPU at the click of a button.

That begs the question though. Why would you want to overclock this system? The base model uses an Intel i9-11980HK, running 8 cores with up to 5.0GHz, and a 24MB L3 Cache, more than enough for any game currently on the market. It’s also boasting an NVIDIA GeForce RTX 3080 graphics card, with 16GB GDDR6 VRAM, as well as 64GB DDR4 XMP RAM, running at 3466MHz. There is absolutely no need to overclock this system! Perhaps in the future, but not right now. There isn’t a single game on my PC that would cause the Alienware X17 to struggle, and that includes the CPU-intensive ARMA3, Death Stranding, and Microsoft Flight Simulator, all of which I can run on their highest possible options.

We are a little limited on the connectivity front, but in today’s wireless age, this isn’t all that detrimental. The rear casing of the computer plays home to the majority of your wanted ports. It features a USB Type-C Thunderbolt 4 port, a USB3.2 Gen 2 port with power delivery of 5V 3A, a standard USB 3.2 Gen 1 Type-A port with powershare, a Killer E3100 2.5G RJ-45 Ethernet port, another USB Type-C Gen2 port, once again with the power delivery of 5V 3A, HDMI 2.1, a Micro SD card slot, and finally, a Mini Display 1.4 port. If you’re worried about your beloved analogue headphones, you’ll also be glad to know there is a 3.5mm headset connection point located towards the rear of the right-hand side, otherwise, the powered USB ports will allow you to easily increase the number available using a USB hub, but once again, with almost everything going wireless these days, they’re really not going to be a necessity. 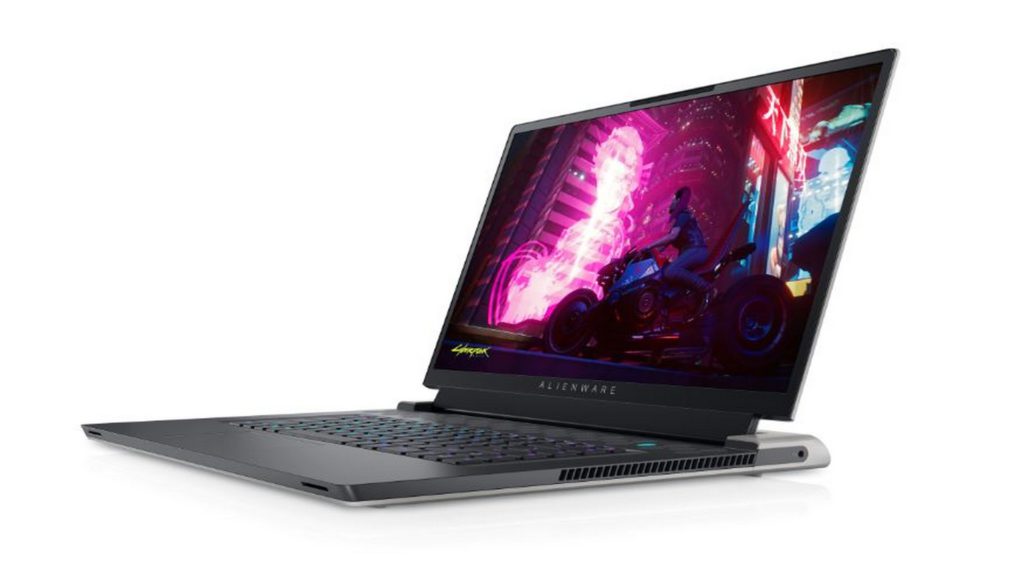 Needless to say, I bumped up the performance settings and overclocked both the CPU and GPU before running it through my beloved benchmark tests, and to combat the potential heat generated, I also cranked the throttle for the fans all the way to 11. To my delight, the four fans were incredibly quiet, even at full throttle, and the quad fan technology kept the system running relatively cool. Unfortunately, the benchmark test was a bit of a flop, but this is no fault of the Alienware X17 R1. Every element, with the exception of the RTX 3080, significantly outperformed similar components, and the only reason the GPU didn’t register on the test was that the benchmark had nothing to compare it to, so it was time to boot up a game.

I wanted to play something that would really test out the card. Something that would make use of the Ray Tracing capabilities of the RTX series. Something so exceptional in its design that you could easily mistake it for a movie, and what better game than Death Stranding. While Cyberpunk 2077 features heavily on the promotional website, I somehow doubt my Xbox copy will work, and Death Stranding looks just as good. After initially starting it on my normal PC, which features an RTX 2060 S, the NVIDIA RTX 3080 leaves it for dust. The character movements were so smooth and crisp, the camera panning reminded me of those sweeping shots you see in movies, and the environment looked as though I was there. The clarity I experience was second to none, and this is on a Full High Definition laptop screen – I’m used to sitting in front of two UHD monitors!

Dell never ceases to amaze me, and the new Alienware x17 R1, even in its most basic configuration, is a thing of absolute beauty. The newer, more elegant design is an impressive feat of engineering and houses an absolute monster of a gaming machine that blows away the system requirements of any title you throw at it. I know what I want for Christmas, and the Alienware X17 R1 would be a very welcomed addition to my arsenal.