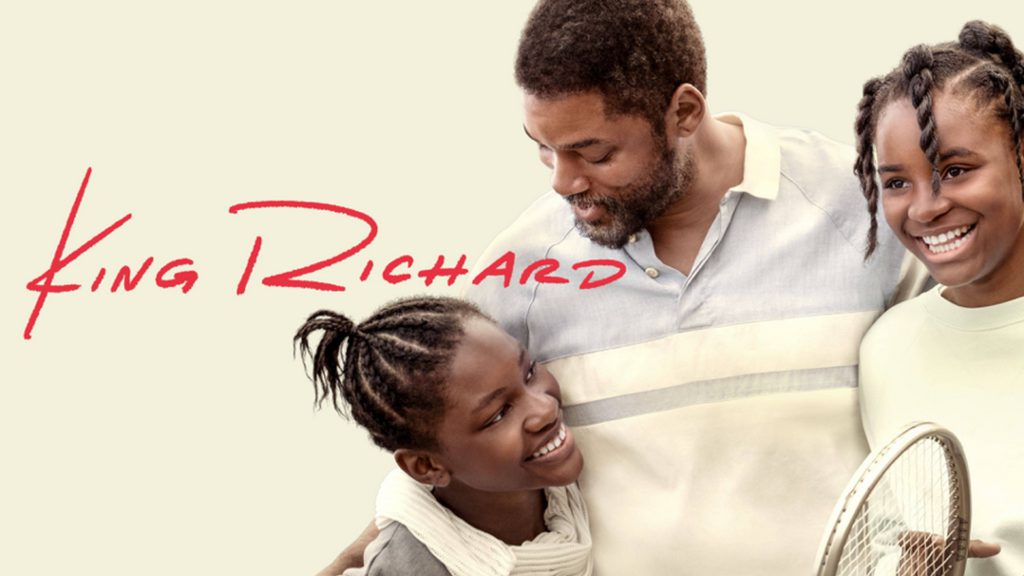 When I heard there was going to be a biopic film based around Serena and Venus Williams, I was a little surprised to hear the story would focus more on their Father, Richard Williams. What I got to experience, however, was far deeper than any story focused solely on the iconic tennis superstars, as their entire family helped to shape their phenomenal true story. Warner Brothers have brought on a relatively new director, Reinaldo Marcus Green, who has given life to the screenplay of Zach Baylin and has set the stage for one of 2021’s biggest successes.

First and foremost, the casting choices across the board could not have fit any better to provide an authentic family atmosphere. Will Smith headlines as Richard Williams, with Aunjanue Ellis supporting as Ocacena Williams, a dynamic husband and wife team that will fight tooth and nail for their family. Saniyya Sidney is thrown into the spotlight as the break-out star Venus Williams, while co-star Demi Singleton follows in her wake as Serena Williams. The chemistry between the family that is raising five daughters in Compton, LA at the start of the 1990s was such a sincere and surreal experience, especially since we get to see the less glamorous side of chasing the dream.

Before his daughters were even born, Richard had created a master plan to make them conquer the tennis world and even created a brochure to share this very plan with anyone that would stop long enough. To say he was driven would be an understatement, and both Serena and Venus were able to match his enthusiasm and would train with him, rain or shine. His excitement and confidence, however, weren’t matched by the multiple clubs and coaches that would repeatedly turn him down and send him on his way without even a glance in the girl’s direction. Whether through sheer grit or determination, he always fought hardest to keep a smile on his face and keep his infectious positivity while keeping his daughters humble.

Will Smith has always been known for his charisma, so to see him slow down a bit and embrace the character was something special. His mannerisms, with a hunched-over stance, and the way he carried his hands in front of his person paired with his almost stuttering southern accent was truly one of his most ambitious performances. Saniyya also underwent quite the preparation to look the part, considering she is naturally a left-handed person, she had to undergo months of training to play right-handed and learn how Venus would move. Watching her on-court during juniors all the way to her first pro event, even with the tasteful editing for a bit of flair, really highlighted her commitment to her off-screen training.

Saniyya was excellent in her portrayal of Venus, she was soft-spoken and able to articulate her thoughts admirably, but a considerable amount of her emotions was conveyed through her body language and facial expressions. Demi’s role in the film as Serena was a bit of a background element as she had to watch her older sister get selected to attend and compete, her Mother carried on her training while her Father was preoccupied, to say the least. It was in these moments that the cracks began to appear, as Richard’s hyper-focus on the plan began to feed his ego and the chip on his shoulder appeared.

So far, Richard had been a self-taught coach and had managed to instill a formidable work ethic in his daughters. When they landed their first coach, Paul Cohen, played by Tony Goldwyn, he continuously intruded on the lessons and was ferociously protective of Venus. In an open-ended interpretation, some would say he was also protecting his ego and trying to convince himself as well as others that he was a great coach too. This manifested into disdain against the agents that attempted to sign Venus, he knew their worth, which should have been his driving force, but his pride seemed to influence his decision to pull her from junior competition completely.

When they seem to be at their lowest point, a Hail Mary call to Rick Macci, one of America’s most prolific tennis instructors, saw them land the deal of a lifetime with a relocation to Florida. Jon Bernthal’s portrayal of Rick was stellar, an absolute pleasure to watch his back and forth with Will Smith as their characters continually clashed with conflicting ideals. Watching him borderline raise the rising stars as if they were his own and fighting for what is right by them and not just by what their Father wanted was the spark of hope in the darkest moments.

While being slightly glamorised for the sake of making a Hollywood production, the source material was able to shine through with the most important elements of how Venus and Serena became icons. It showed that they were destined for greatness and were more than just a symbol to African-Americans. They became an inspiration to an entire generation. As for King Richard, he will forever be immortalised as the catalyst that kick-started the dream, warts and all. For a heart-warming and emotional journey, King Richard will inspire and offer thought-provoking moments, time and time again.