By StacefaceMayhem on June 2, 2021 on Hardware, 5 More
close [x]
Tweet
No Comments 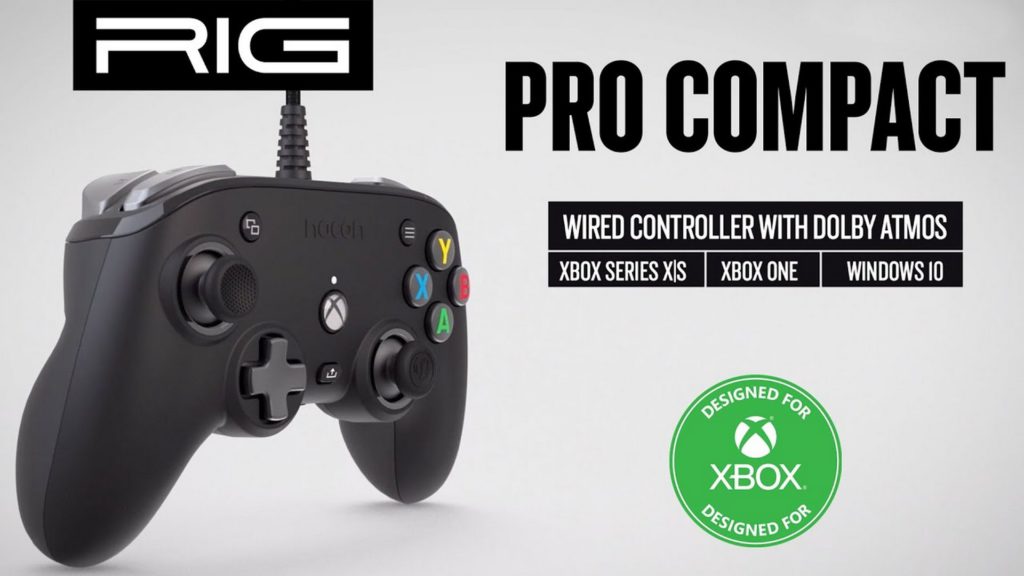 The RIG branding, previously a Plantronics asset, has recently been acquired by Nacon, and we couldn’t be happier. This acquisition brings with it a range of premium gear to pad out Nacon’s already impressive roster. Part of their new collection is the brand new ‘Pro Compact Controller’ designed Xbox One, Xbox Series X|S & PC gamers alike. Sporting some cool features let’s dive in and see if it has the goods.

The Pro Compact is a silky, matte black, little number but also comes in a crisp, clean white too if that is your vibe. Looking like a Playstation/Xbox hybrid, this ‘slim but chunky in the right places’ controller fits comfortably in your hands, even more so with the well-designed finger supports. The textured underbelly also adds to the comfort of the grip for those utmost sweatiest of matches. The bumpers on each side wrap around the top nicely and each trigger snaps and springs at the slightest touch with ease.

A 3 metre braided USB-A cable enables minimal drag and lots of length to play from a range of areas and positions. Now while I prefer cabled because I am too lazy to charge things, I do understand why the masses don’t. I found another wire amongst my plethora of other devices at my setup created just a mess of cords that added to my cable management. 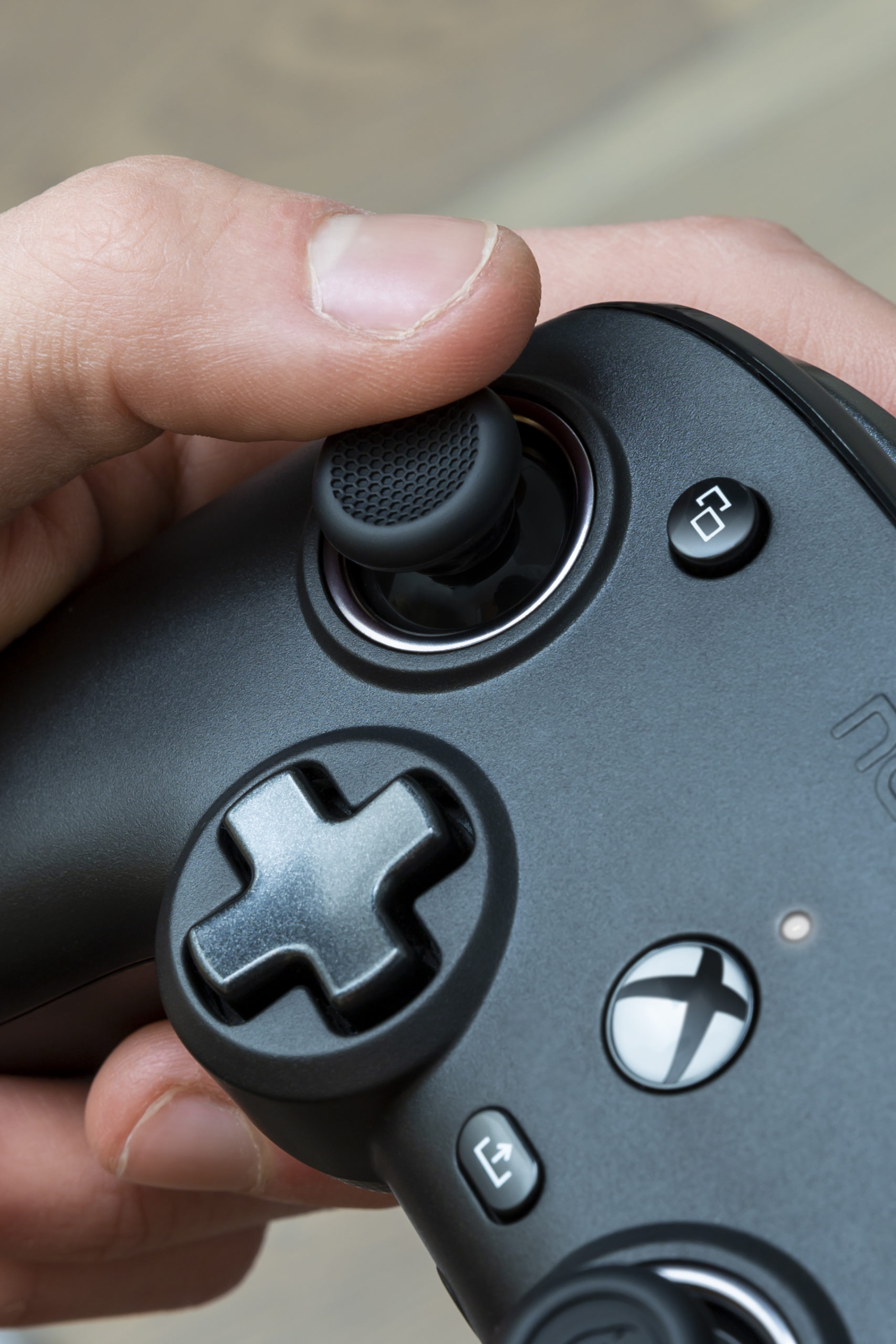 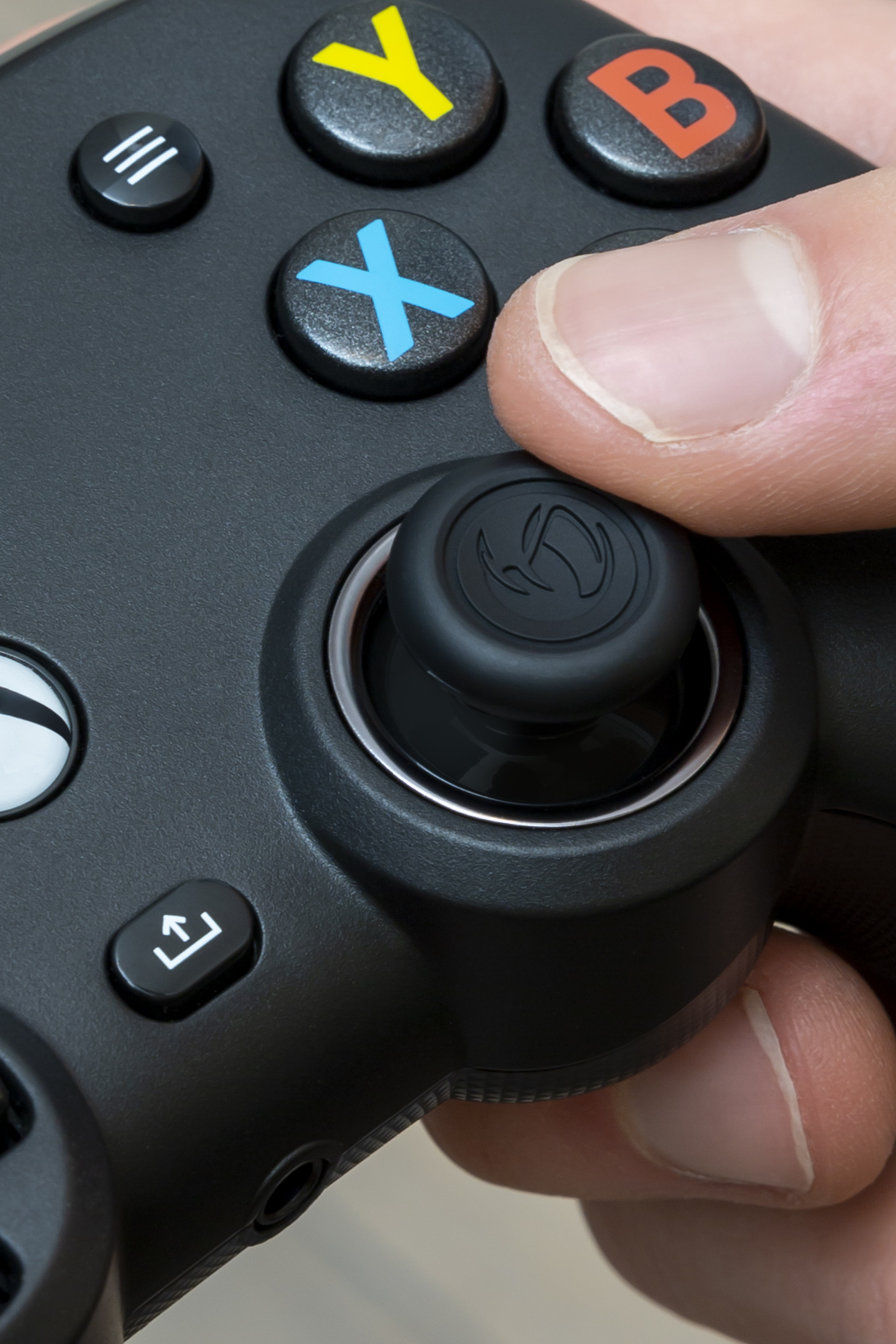 Typical of an Xbox controller though is the offset joysticks and the standard A/B/X/Y buttons in their classic colour formation but more noticeably with larger oversized buttons; definitely an interesting styling. Embellished at the bottom in the middle is the iconic Xbox Home button and more bizarrely the Menu, View and Share buttons are sort of sporadically placed. This leaves the middle with a wide space of nothing and feels a bit out of place really.

The Pro Compact also has its own customisation software, pretty much a staple now with all modern-day peripherals. Self-titled and available for download in the Microsoft Store, this software allows you to remap buttons on your controller, set dead zones and sensitivity of your triggers and update any firmware. Saying this was as simple as pie is a complete understatement. It was so simple and easy to navigate I just wished a lot more brands took notice because no one has time for an overcomplication of tinkering with your devices. I only wished there had been some onboard profiling so I could save a number of different button layouts.

With precision and smoothness, the Pro Compact responds to the slightest of touches. I found the sticks were well balanced with the distance that every movement translated well to the screen. It really is a comfortable controller to use. 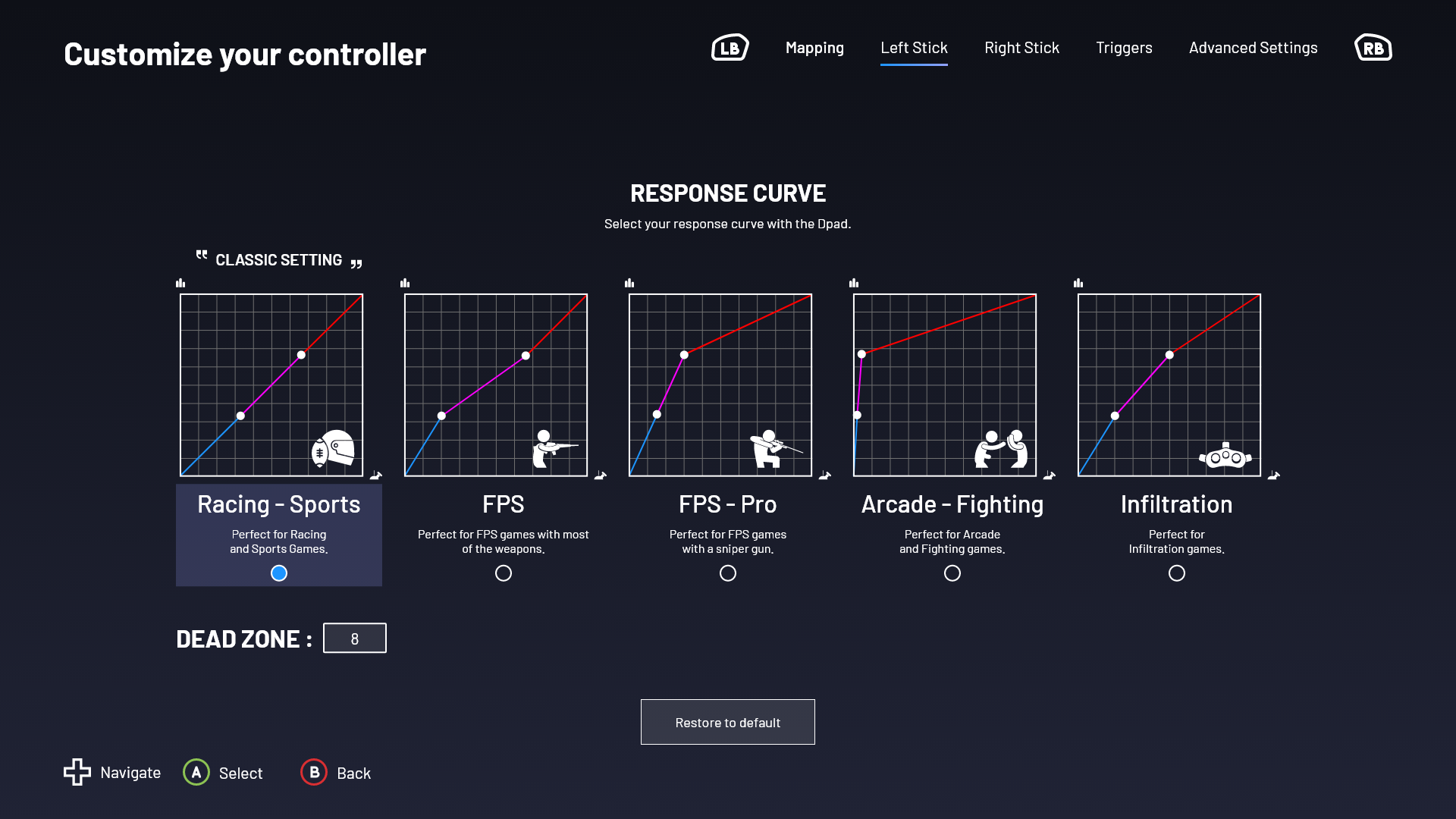 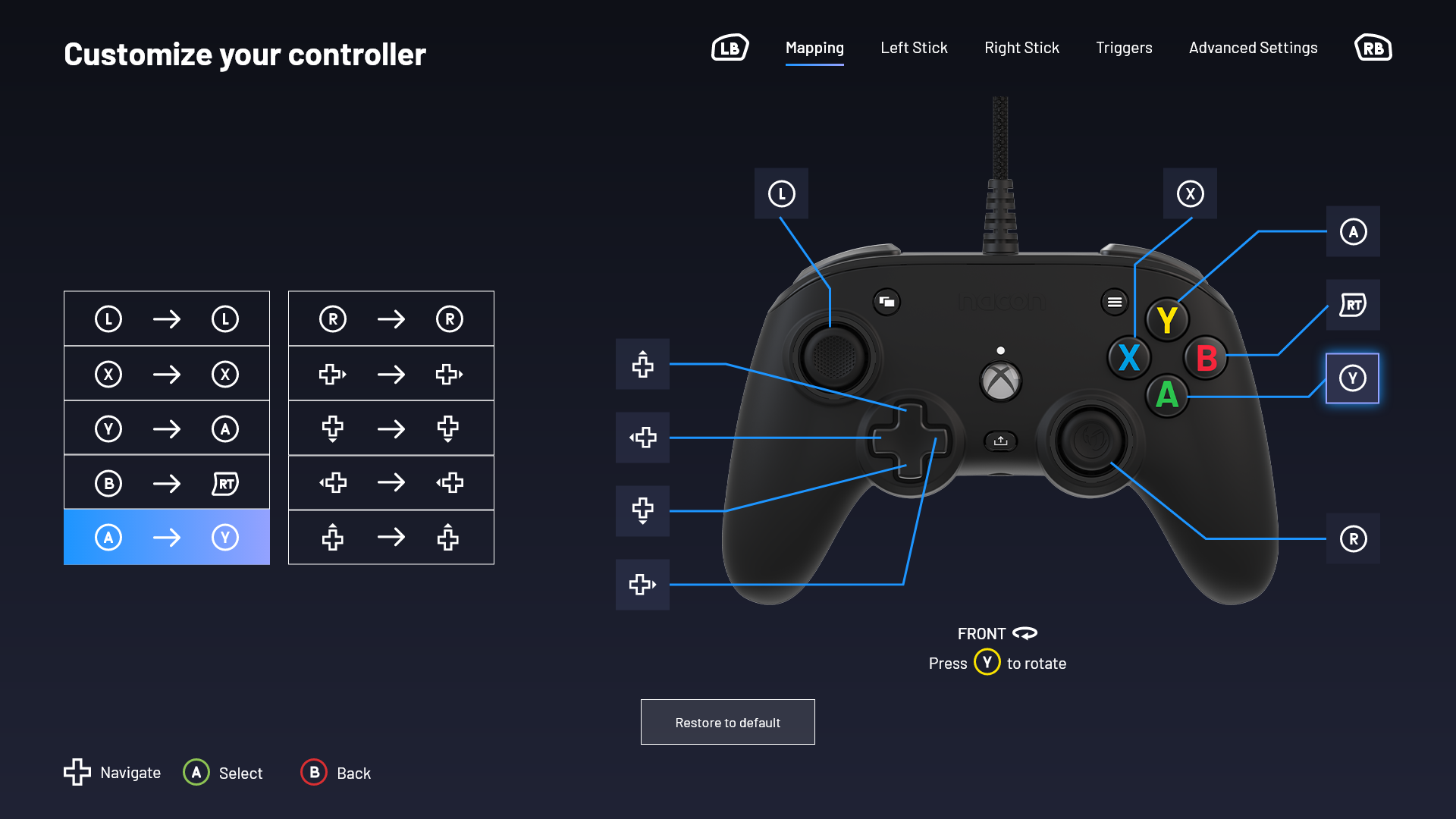 Most admirable about this third-party controller is the fact that it was designed with Dolby Atmos in mind and even coming free with the life of the controller. With the use of the Dolby Access App (that can be launched on the Xbox dash and PC), you now have the key to the wonders of surround sound with this controller. That is right my friends, not only are the people at Nacon interested in your gameplay but also your sound quality. I loaded up the Dolby on the Xbox, tinkered with the settings and boy does it really make a difference. The terror as I ripped people apart in the surf on Maneater was unreal, the definition of movement in Rainbow Six Siege was remarkable and the sound of the waves in Sea of Thieves was so calming it was surreal.

Now, while most people would use this for that competitive edge in gameplay such as listening for footsteps or bullet fire, while I tried to do this, and believe me I tried to be competitive I however found another genius way to utilise it. Being the oh so casual gamer, I found myself plugging my earbuds into the controller while it was connected to my PC, booting up Spotify, and just jamming to the crisper beats and harmonys I was now getting. It was crazy how I could just vibe out through my controller; next-level stuff guys.

Nacon is really delivering the goods with this one. While a bit awkward looking with the button layout and design, this is one controller that knows how to get a job done. Whether it be its precise responsiveness or attention to detail by delivering Dolby Atmos compatibility, they certainly know what gamers want.