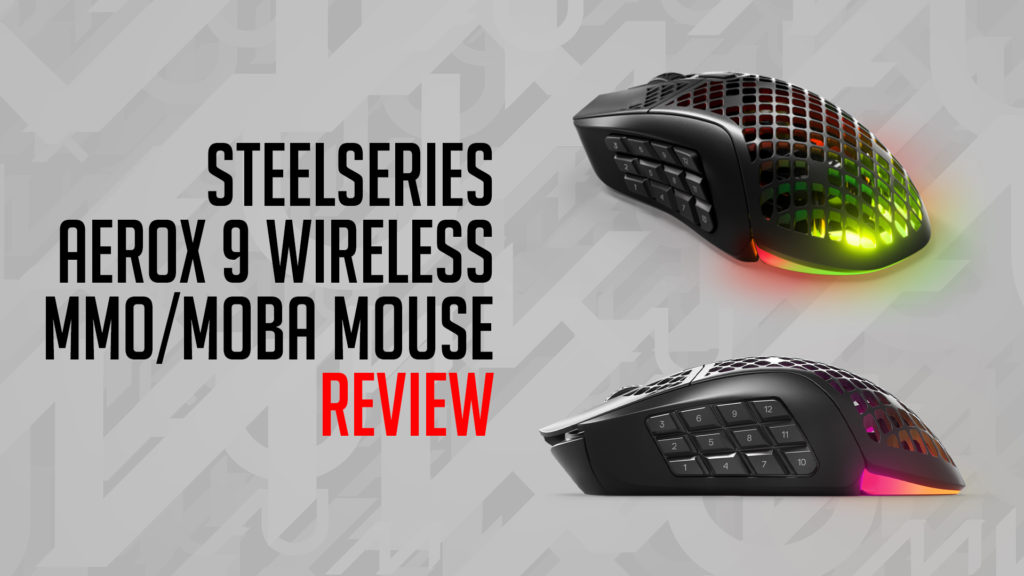 I like buttons. Lots of buttons. My current gaming mouse has twenty in total, and each has its own purpose, but it’s getting a little long in the tooth. Fortunately, SteelSeries sent us the new AEROX 9 Wireless MMO/MOBA Gaming Mouse and seeing as I was in the market for a new one, I was happy to put my hand up for this one.

Coming from the makers of the best lightweight mouse, you’d expect a lot from this one, and it certainly delivers. With its comfortable form factor and its lightweight design, coming in at 89 grams, it is really comfortable to use. It also looks really good, and thanks to the diamond patterns cut out of the main body and the two main mouse buttons, you can see the internal workings as they light up with your favourite RGB patterns.

While it has slightly fewer buttons than my current mouse, there are still 18 programmable buttons that you can map to certain keystrokes, or even create your own macros using the SteelSeries GG software. As standard, the 12 side buttons are set to mimic the numbers across the top of your keyboard, as well as the – and = keys. I used the SteelSeries GG software to change this up a little, instead, mapping it to my number pad so that I could make use of my ARMA3 radio keybinds, keeping my hands where they needed to be in the midst of combat. 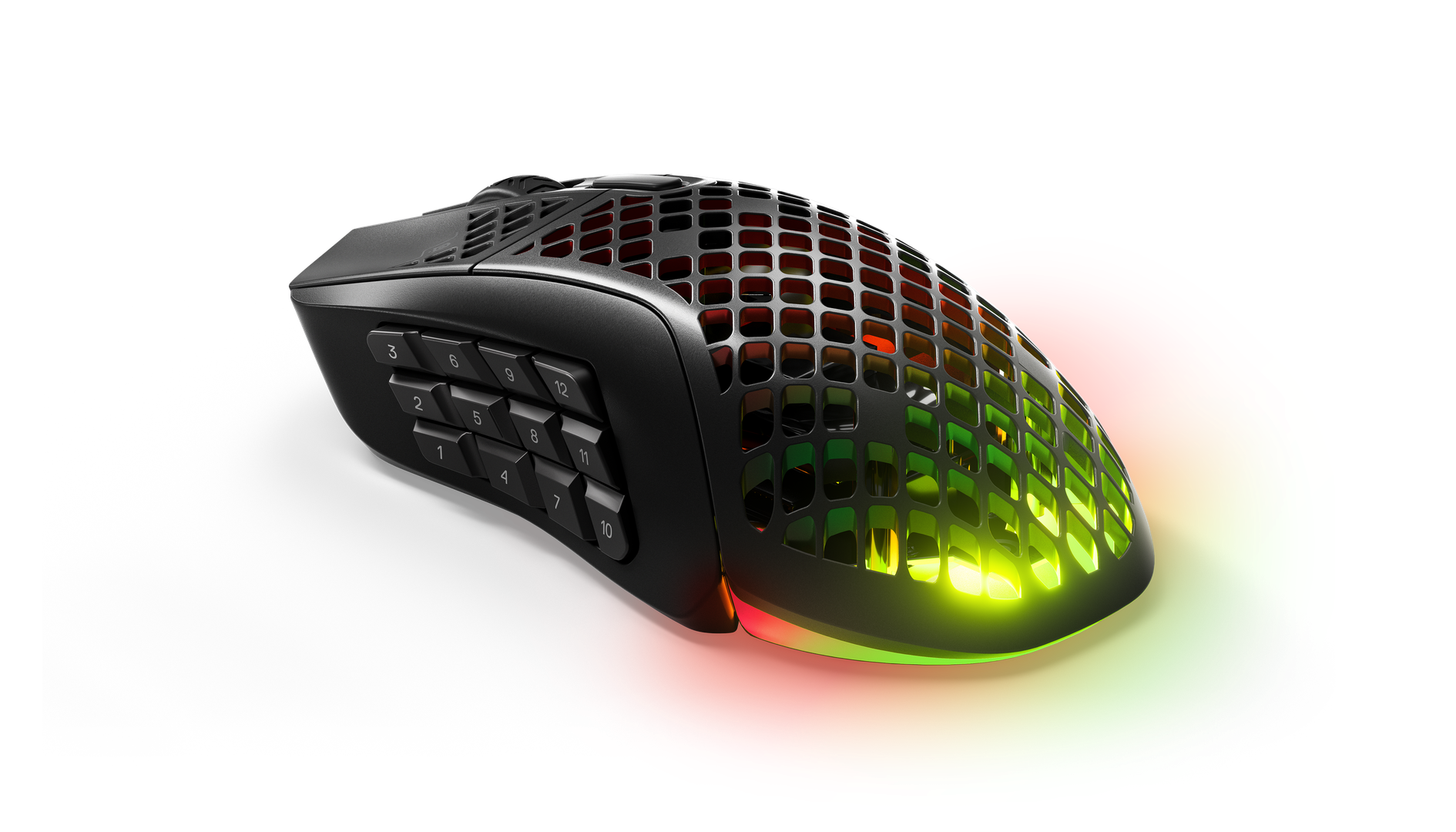 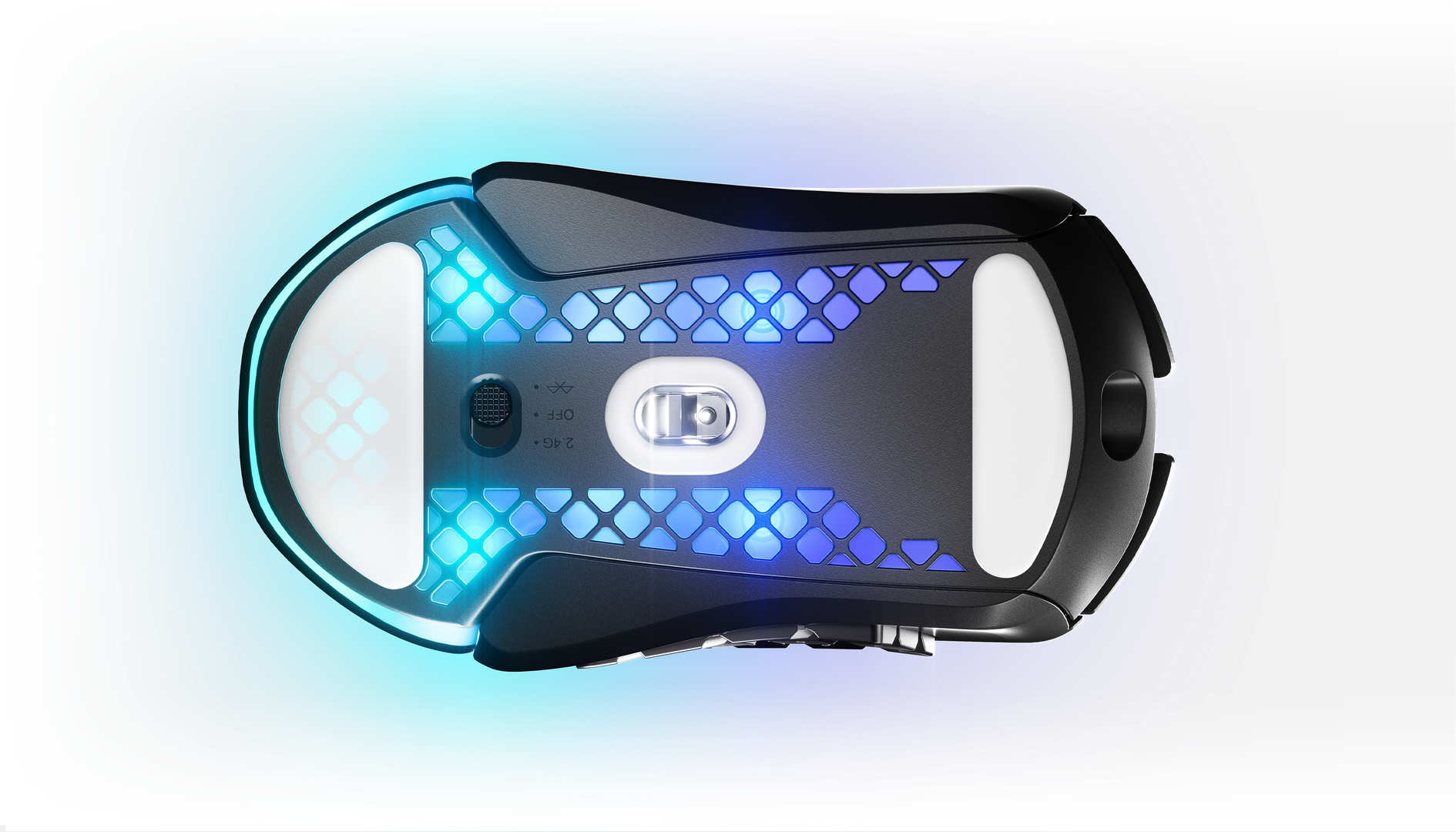 The SteelSeries GG software also allows you to fine-tune the performance and really make use of the TrueMove Air sensor, ranging in sensitivity from 100 to 18000 CPI, as well as adjust the acceleration and deceleration rates for those faster movements that people playing competitive shooters like CS:GO or Valorant want. You can even adjust the Angle Snapping of your movements, allowing you to move your cursor in straighter lines – a little cheesy, but great for snipers moving between targets on the same elevation. It’s also in this software that you can adjust the RGB patterns of your mouse, making use of some preset patterns, or design your own, and it’s really cool to watch the colours changing through the diamond cutouts I mentioned earlier – but most of the illumination seems to be on the bottom of the mouse, so unless you’re using a glass table, you won’t be seeing too much of your pretty effects.

One of the best features I found while testing out SteelSeries gaming mice is that they have several different ways they can be connected to your device, and the AEROX 9 Wireless MMO/MOBA Gaming Mouse is no different. You can connect via the supplied USB-C cable, which doubles as a charger, connect via 2.4G wireless, using the supplied dongle, or even connect via Bluetooth, meaning you can connect it to your tablet or mobile phone.

They’ve even included a lovely little USB adapter, should your chosen device not have a USB-C interface, and charging takes next to no time but offers up to 160 hours of use – assuming you’re using the default settings. A simple sliding switch on the bottom of the mouse will allow you to choose between off, which helps decrease the time it takes to charge but also allows it to be used via the USB cable, 2.4G, and Bluetooth, and it’s quite clearly marked, so you’ll never be guessing what setting you’re on. 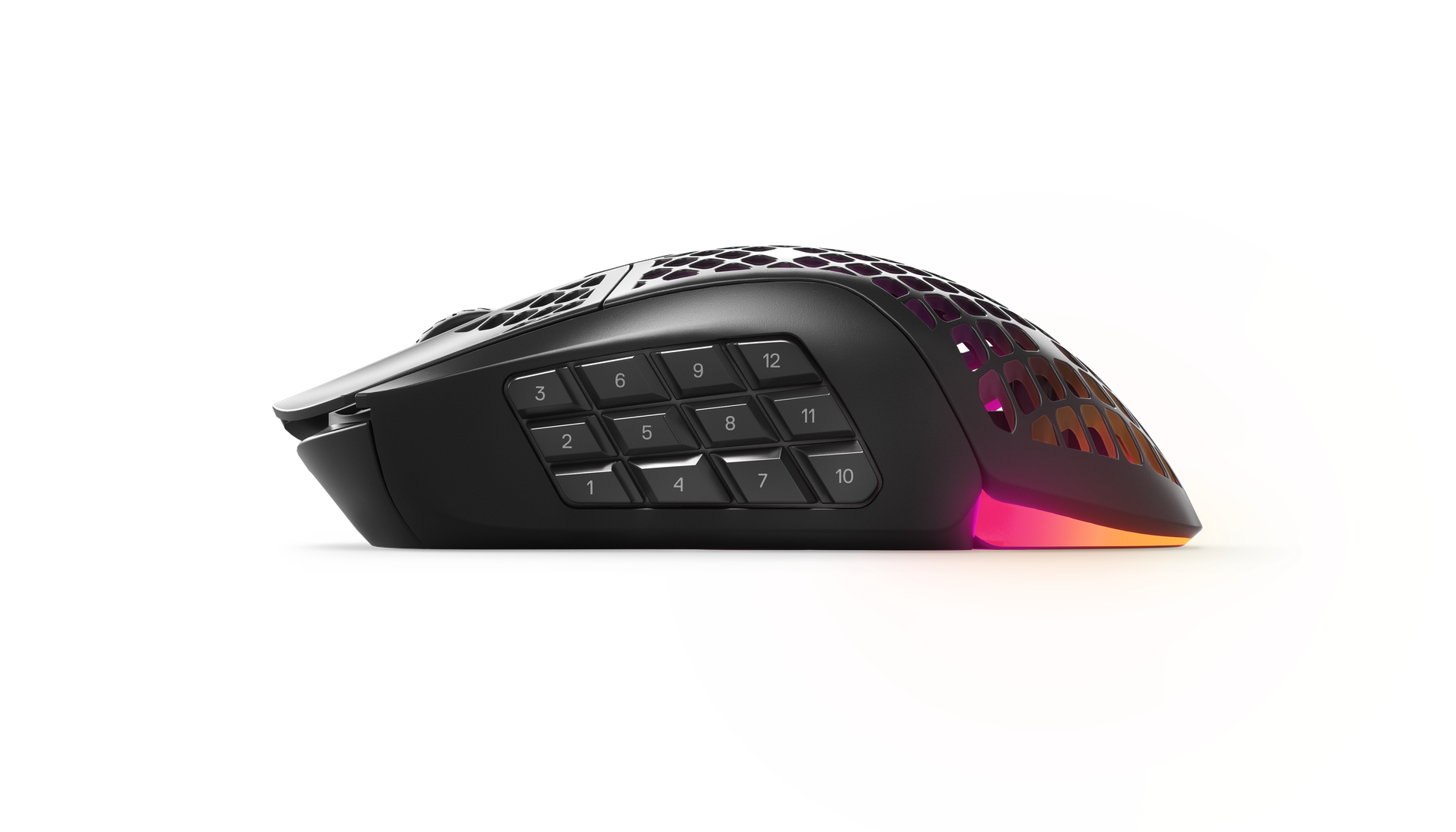 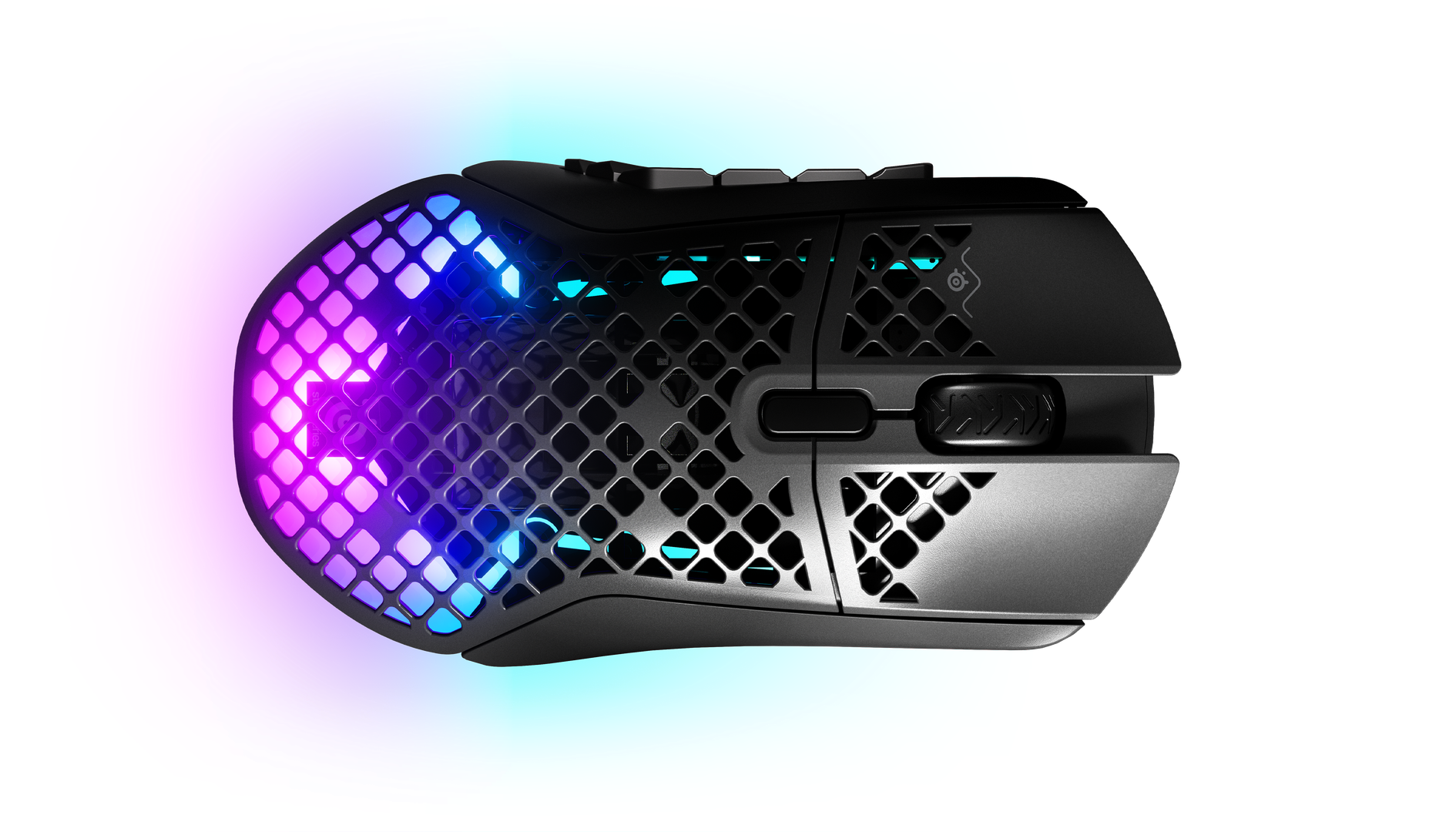 The AEROX 9 Wireless MMO/MOBA Gaming Mouse is a little narrower than the one I am used to, so it did take a little getting used to. The side panels on this mouse curve in and under the mouse slightly, whereas I am used to them bulging out a little. This meant that to use the 12 buttons located on the side I had to really think about what I was doing to begin with, but this was more a case of muscle memory than anything. It’s also a little longer than what I am used to, but I did find this to be more comfortable, as the palm rest fit my hand better, and that diamond pattern I keep coming back to felt a lot more grippy, so I felt like I had more control over how it moved.

Overall, it’s a great mouse for MMO players, but it also has its place in first-person shooters, particularly ones that make use of an insane number of keyboard bindings. My only real gripe is how little you see of the RGB lighting. The main section you can see is powered by three RGB LEDs that shine down onto a semi-translucent white area, so you get three really bright spots before it fades away a little.

I think being able to see the internals is a pretty awesome touch, but I think for me personally, I would have preferred this to be covered with the same translucent material and house a few extra LEDs to have the whole cavity light up. As much as I like buttons, I also really like shiny things.