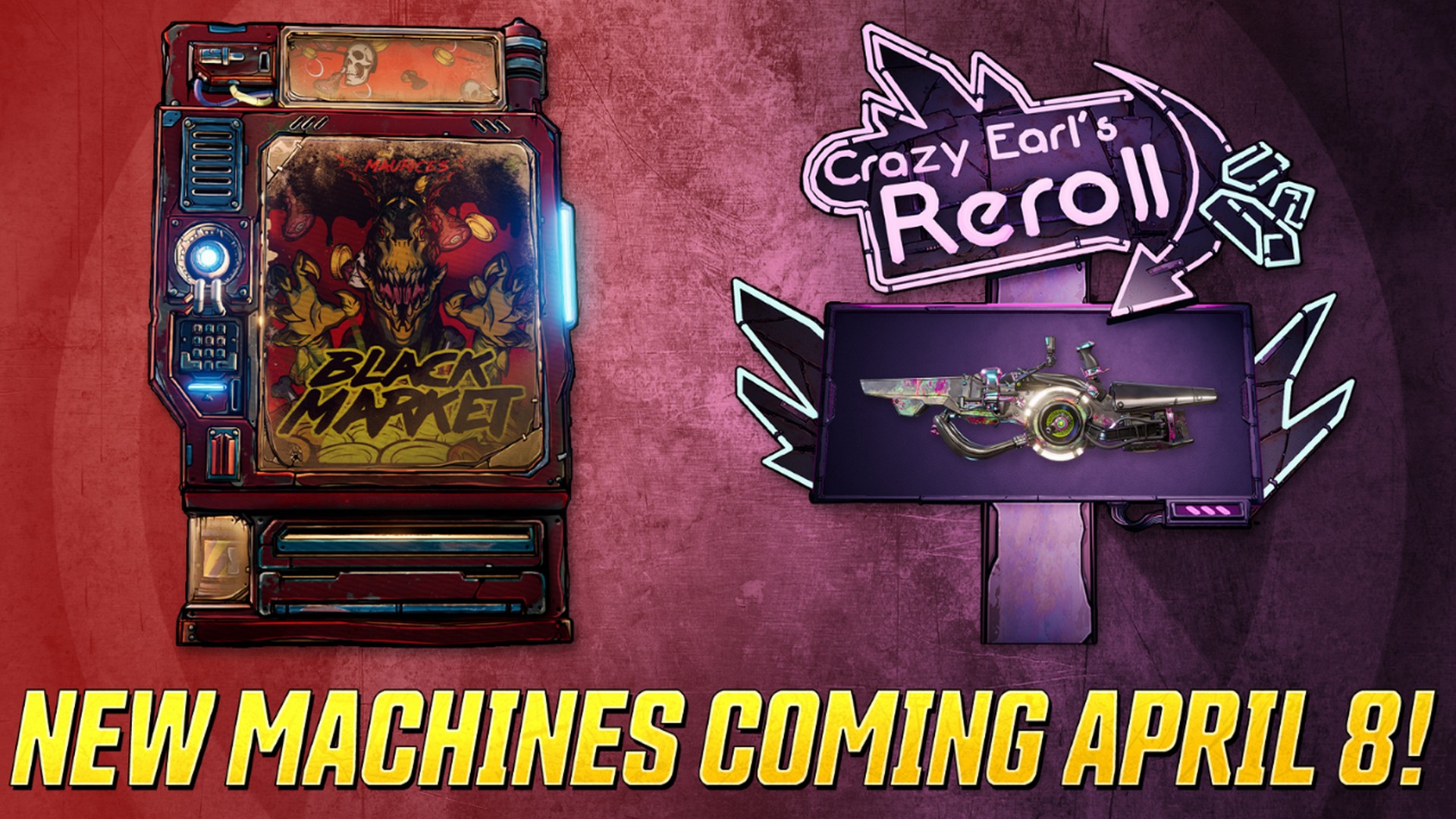 Another Borderlands® 3 limited-time mini-event has kicked off, and starting April 8, two new machines are being added to the base game: Crazy Earl’s Reroll and Maurice’s Black Market Vending Machine, both of which will be available to all players at no additional cost.

Crazy Earl’s Reroll is a huge boon to Vault Hunters looking to get the most out of their gear. In exchange for some Eridium, Crazy Earl’s contraption will replace the existing Anointment on a specified item. Anointments are powerful effects that can unlock the full potential of your character build. By rerolling the Anointments on your favourite pieces of gear, you can create the most optimized loadouts.

But that’s not all! From now through April 8, you can take advantage of the limited-time Show Me the Eridium mini-event in Borderlands 3. You can expect Eridium drops from standard enemies, increased Eridium drops in Mayhem Mode, discounted Eridium costs to use Moxxi’s Vault Line slot machine, and a discount on all the items sold by Crazy Earl in the Cargo Bay of Sanctuary III. This is the perfect time to snag tons of the rare Eridium element, especially if you’re preparing for the incoming raid boss.

As part of the Director’s Cut add-on launching on April 8, you can take on a raid boss encounter against a humongous Varkid known as Hemovorous the Invincible. In order to open the door to Hemovorous’ lair on Pandora, your group will need to deposit 500 Eridium to prove you’re serious about taking on this endgame challenge. By stocking up on Eridium now, you’ll have the means to confront the raid boss straight away, though you could also choose to spend some Eridium at Crazy Earl’s Reroll to perfect your loadout ahead of this intense battle.

The Show Me the Eridium mini-event runs until April 8, ending just before the launch of Director’s Cut and the update containing the two new machines. If you don’t own Director’s Cut yet, you can purchase it individually or as part of Borderlands 3 Ultimate Edition or Season Pass 2.* The add-on will bring all-new ways to play, including a monstrous raid boss, new murder mystery story missions, and behind-the-scenes content.

To learn more about how Vault Cards and Diamond Keys work, you can refer to this comprehensive guide on borderlands.com. Please note that, at this time, Vault Cards can only be accessed by players who own the Director’s Cut add-on and can’t be purchased individually or separately. Similarly, Diamond Keys must be earned through gameplay and cannot be purchased individually or separately.

Borderlands 3 is available now on Xbox One, Xbox Series X|S, PlayStation 4, PlayStation 5, Mac, Stadia, and PC via Steam and the Epic Games Store.