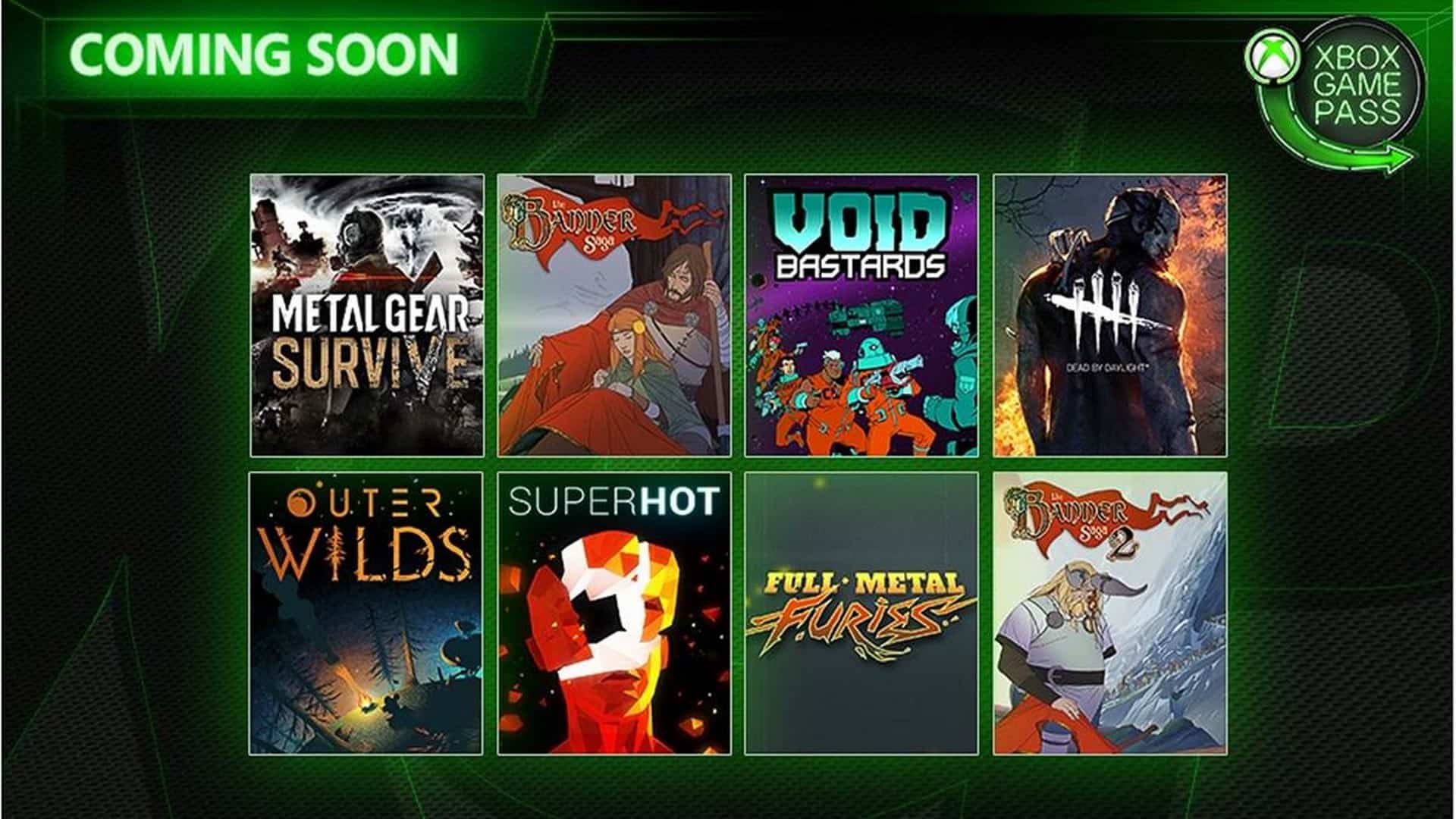 Today, Xbox announced the next round of games coming to Xbox Game Pass. Check out the amazing games coming soon below.

Create your own character and learn to survive in a strange, alternate Metal Gear universe. Experience the enduring stealth action gameplay of the series, with new elements of exploration and survival. Scavenge resources, craft weapons, build a base camp, and explore the unknown while developing the skills necessary to survive in this hostile environment. Then, in co-op mode, assemble a team of four players to infiltrate and defend areas from hordes of creatures. Place fortifications and strategically place weapons against ever intensifying enemies. Teamwork and resourcefulness are key in these fast-paced co-op missions.

Pile on your pelts, you’re joining a Viking story where you’re fighting to prevent the world’s end. You not only lead and level up members of your caravan, but you risk their permadeath, and even outright mutiny. Your decisions in combat as well as the journey will affect your personal story, because it’s written by your actions. It’s a recipe to care a lot about your characters, dig deep into Viking ethos, and try to beat the odds. Decide if you’re going to be a benevolent leader of the banner or be one that looks out for only your own.

A revolutionary new strategy-shooter that will test your wits as well as exercise your aim. Can you lead the misfit prisoners of the Void Ark through the derelict spaceships and myriad dangers of the Sargasso Nebula? Will you make the right choices about what to do, where to go and when to fight? Master combat, manage ship controls, scavenge supplies, craft improvised tools and much more!

Death is not an escape. Dead by Daylight is a 4 vs 1 multiplayer horror game, where one player takes on the role of the savage killer, and the other four players are survivors, who must escape the killer without getting caught. That sounds easier than it is, because the Killing Ground environment changes every time you play.

Explore for the sake of your curiosity with a hand-crafted solar system filled with secrets to discover and perils to avoid while exploring space. Players are given a variety of tools to aid in space-backpacking: including their own spaceship and jetpack; a surveyor probe for scouting and taking pictures; and a signalscope to track down audio signals as well as view landmarks from afar.

Defend the free world to save a war-torn world that is battling itself to extinction. Through working as a team to defeat special enemies, you’ll need to string organics combos that will deal massive damage to your enemies. Choose your hero, develop your combat style, and learn special moves that could save the world.

Continue the Banner Saga! The addition of new classes, as well as the new Horseborn race, give players more choices in the story and in combat. Since the game is story-driven, players will find that their decisions outside of battle affect combat conditions more often in The Banner Saga 2. If you played the first game, you can use your save file to carry your choices over so your favourite members of your Banner will be there.

Blurring the lines between cautious strategy and unbridled mayhem, Superhot is the FPS in which time moves only when you move. No regenerating health bars. No conveniently placed ammo drops. It’s just you, outnumbered and outgunned, grabbing the weapons of fallen enemies to shoot, slice, and maneuver through a hurricane of slow-motion bullets.

If you’re still with us all the way down here, hi! How are you doing today? Doing good? Good. We’re feeling pretty aces right now, just quietly bouncing in our seats, ticking off the days we have left until E3. See you there?

We want to make it as easy as possible to discover games you might have missed out on and jump into newer releases you’re hyped for. Xbox Game Pass has over 100 high-quality games for you to try (seriously, if it’s in the library, why not check it out!), and we’re constantly refreshing and adding more. You can get your first month for $1, and find your next favourite game.