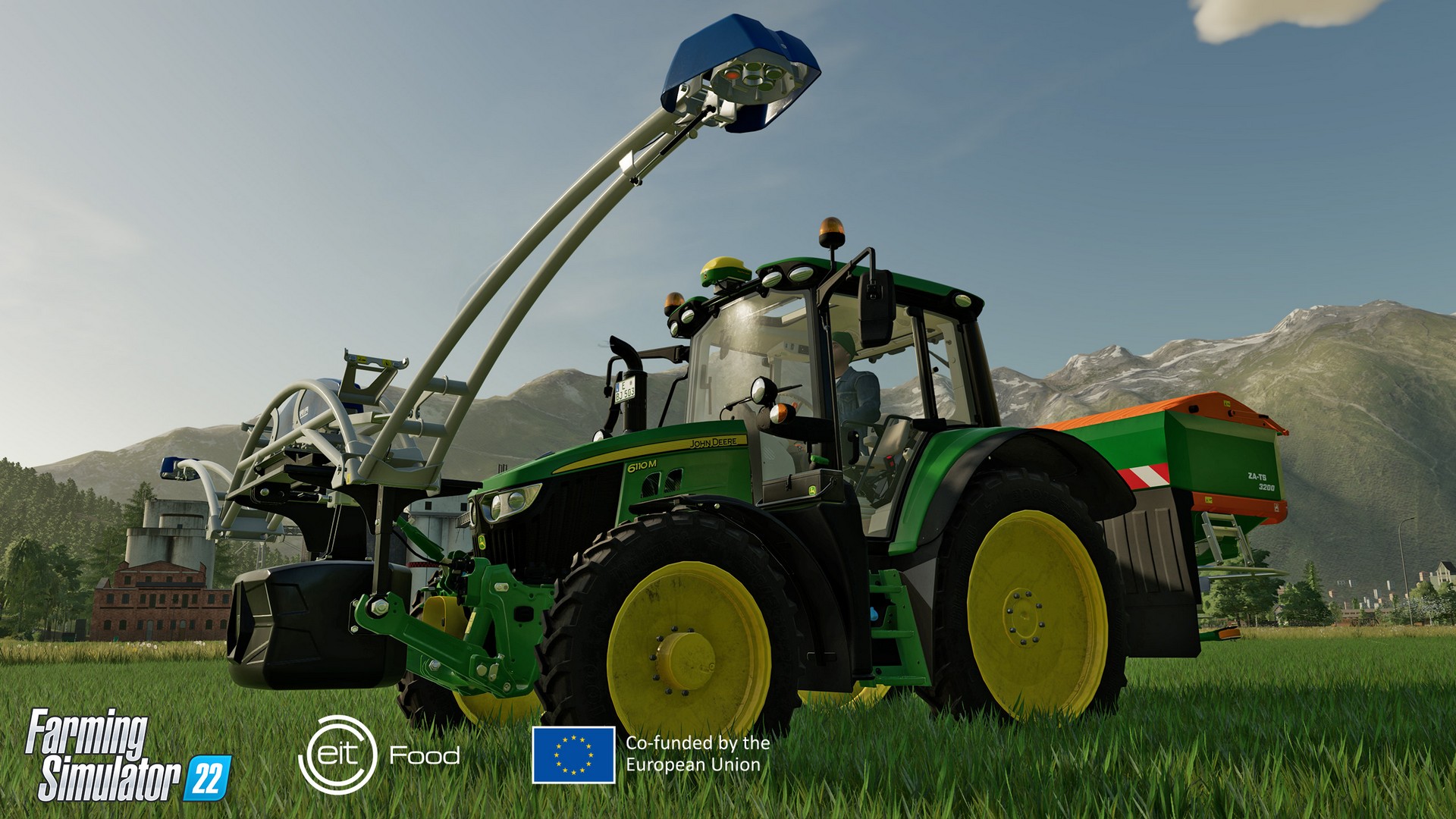 Plenty of new features and machines, but a much lower environmental footprint: Publisher and developer GIANTS Software released the Precision Farming Free DLC for Farming Simulator 22. Initiated by John Deere and EIT Food, Europe’s leading Food Innovation Initiative, the project is co-funded by the EU and adds various new features for sustainable farming operations. It’s free to download via the official in-game ModHub on PC and consoles.

New gameplay mechanics, based on real smart farming technology, extend the aspect of realism: Including four different soil types and soil sampling, economic analysis and an environmental score to assess the eco-friendliness of farming operations – calculated by factors like reduced tillage, nitrogen levels, weed control using spot-spraying technology and others.

Crop sensors and variable-rate application of resources for yield improvement and crop care help players to save seeds, lime, fertilizer, herbicide, fuel and, in the end, money. All while reducing the environmental impact. On the Precision Farming screen, virtual farmers keep track of their actions and their effects on their environmental footprint, as well as their finances.

To extend your repertoire of agricultural tools to run a sustainable farm, the Precision Farming Free DLC includes the ISARIA Scout to take soil samples, the ISARA PRO Active and PRO Compact sensors to measure the nitrogen levels of crops and the John Deere R732i with “PowrSpray” spot-spraying technology to dynamically combat weeds. Also included are the John Deere Gator and the Kotte Garant PTR 30.000 with a John Deere manure sensing system to fertilize fields.

“We’re excited to offer our fans the ability to enhance the realism of their farming operations through sustainable farming technology”, comments Stefan Maurus, Gameplay Programmer & Lead Integrator at GIANTS Software, responsible for the development of the DLC. “We’re proud of this achievement and the opportunity to work with John Deere, EIT Food and all the other partners bringing this important undertaking to emphasize the benefits of sustainable farming technologies to life.”

The project set out to improve the knowledge of modern agricultural technology in society in cooperation with the University of Hohenheim (Germany), the University of Reading (UK), Grupo AN, the largest cereal cooperative in Spain, and the Institute of Animal Reproduction and Food Research from the Polish Academy of Sciences. The first version of the Precision Farming DLC for Farming Simulator 19 proved a great success and was downloaded one million times world-wide.

More Machines and a New Brand in Free Content Update

Also now available for Farming Simulator 22 is patch 1.4, required to activate the Precision Farming Free DLC. Included in the patch is another free content update, adding the fan-favourite tractor CLAAS XERION 5000-4000, the ETV 216i forklift by German manufacturer Jungheinrich as well as various implements by Czech company Salek, that is introduced as a new brand to the series. Overall, seven new machines are added to the game, and this new video trailer shows them in action.