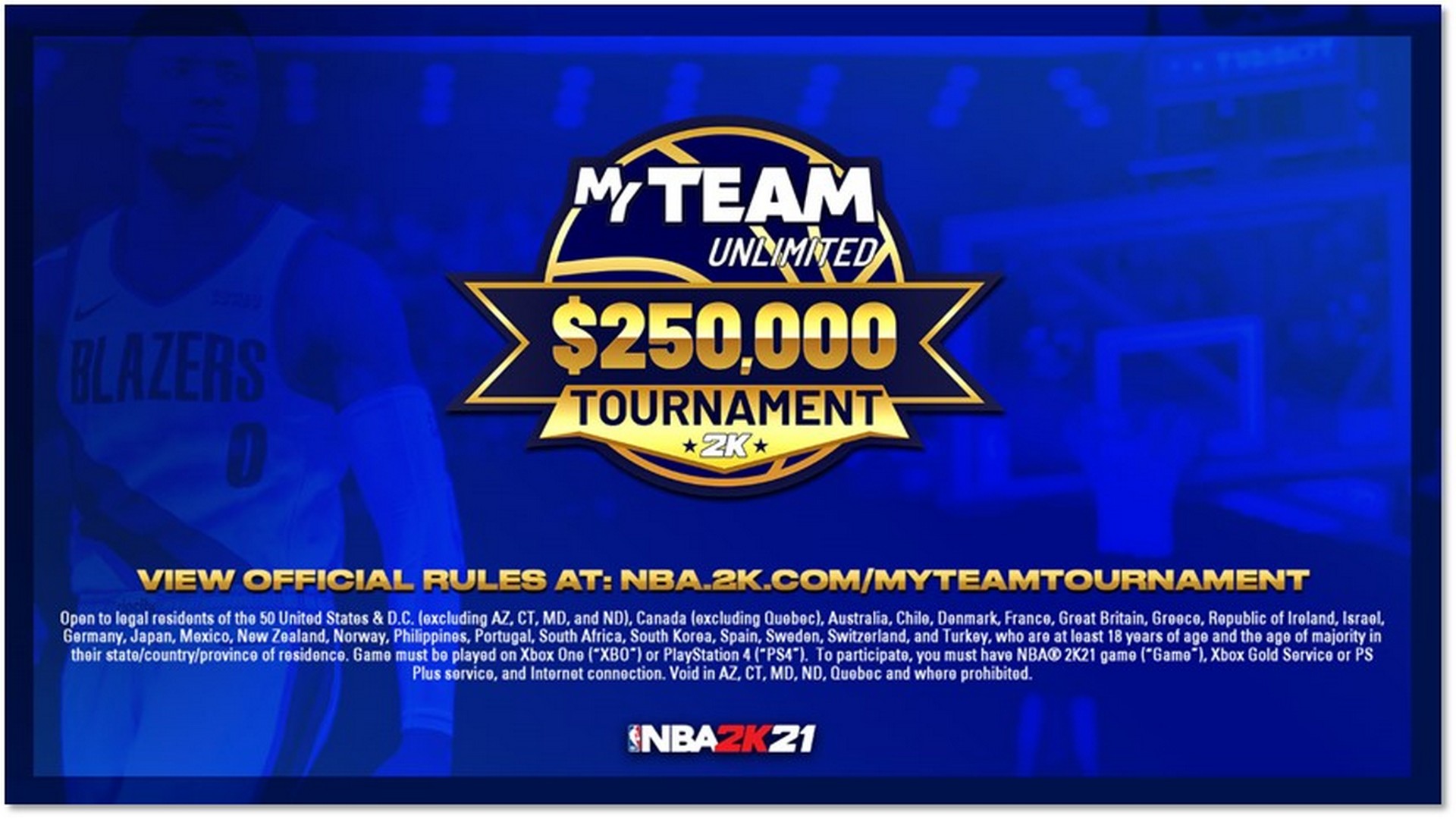 NBA 2K is excited to announce the return of the MyTEAM Unlimited $250,000 USD Tournament for NBA 2K21. The tournament is already underway and will be played using the MyTEAM Unlimited Mode on NBA 2K21 for PlayStation 4 and Xbox One, which features 5-on-5 NBA-style gameplay and allows users to choose any 13 cards from their Collection.

Players can enter the tournament by pre-qualifying at the beginning of each new MyTEAM Season. Seasons are new to NBA 2K21’s MyTEAM mode, and bring new content and ways to play MyTEAM all year long at no additional cost. Each new MyTEAM season features new daily, weekly and seasonal-based challenges and prizes for players to unlock.

Players need to reach the Emerald Unlimited tier in Unlimited Mode to qualify for one of four GameDays, where they will compete for the highest score by playing a series of qualifying matches. Pre-qualifying is already underway for the first GameDay.

The top four competitors with the highest score on each console family (PlayStation and Xbox) will be slotted for the final MyTeam Tournament on February 21, 2021, where 32 players will play head-to-head elimination matches until the winners from each console are determined. The two best console players will then compete in the final Championship on March 7, 2021 for their share of the $250,000 USD prize purse, where the winner will receive $200,000 USD and the runner-up will receive $50,000 USD. Due to current events, all matches including the finals will be played online.

There four GameDays in each of the upcoming Seasons are:

Pre-qualifying periods for each GameDay begins at the start of each new season: 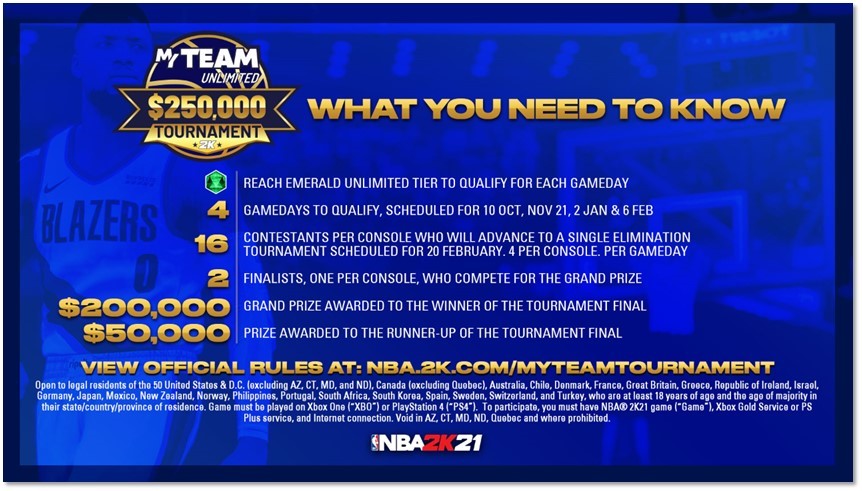 The tournament is open to players aged 18 and over in eligible territories. Players must compete on the same platform family (PlayStation or Xbox) throughout the entire contest. Full contest rules are available at nba.2k.com/myteamtournament and an abbreviated set of rules is below:

Open to legal residents of the 50 United States & D.C. (excluding AZ, CT, MD, and ND), Canada (excluding Quebec), Australia, Chile, Denmark, France, Great Britain, Greece, Republic of Ireland, Israel, Germany, Japan, Mexico, New Zealand, Norway, Philippines, Portugal, South Africa, South Korea, Spain, Sweden, Switzerland, and Turkey, who are at least 18 years of age and the age of majority in their state/country/province of residence. Game must be played on Xbox One (“XBO”) or PlayStation 4 (“PS4”). To participate, you must have NBA® 2K21 game (“Game”), Xbox Gold Service or PS Plus service, and Internet connection. Void in AZ, CT, MD, ND, Quebec and where prohibited.