Wizards of the Coast’s Magic: The Gathering (MTG), one of the world’s oldest and most popular trading card games, has released a special recipe to celebrate the launch of its latest card set Modern Horizons 2,

Chef’s Surprise – A Recipe From The Underworld Cookbook is a recreation of a “Food” Token card, which was made popular by legendary card and famous magical character named Asmoranomardicadaistinaculdacar (Asmor for short). The character appeared in previous MTG lore in 1993, and made an impression due to its overly long name.

Asmor is famous in the MTG world as the author of “The Underworld Cookbook”, and was offered a deal by a Lord of the Pit that she had summoned: to prepare food for the demon for seven years or be a meal for the demon. More information is available here. 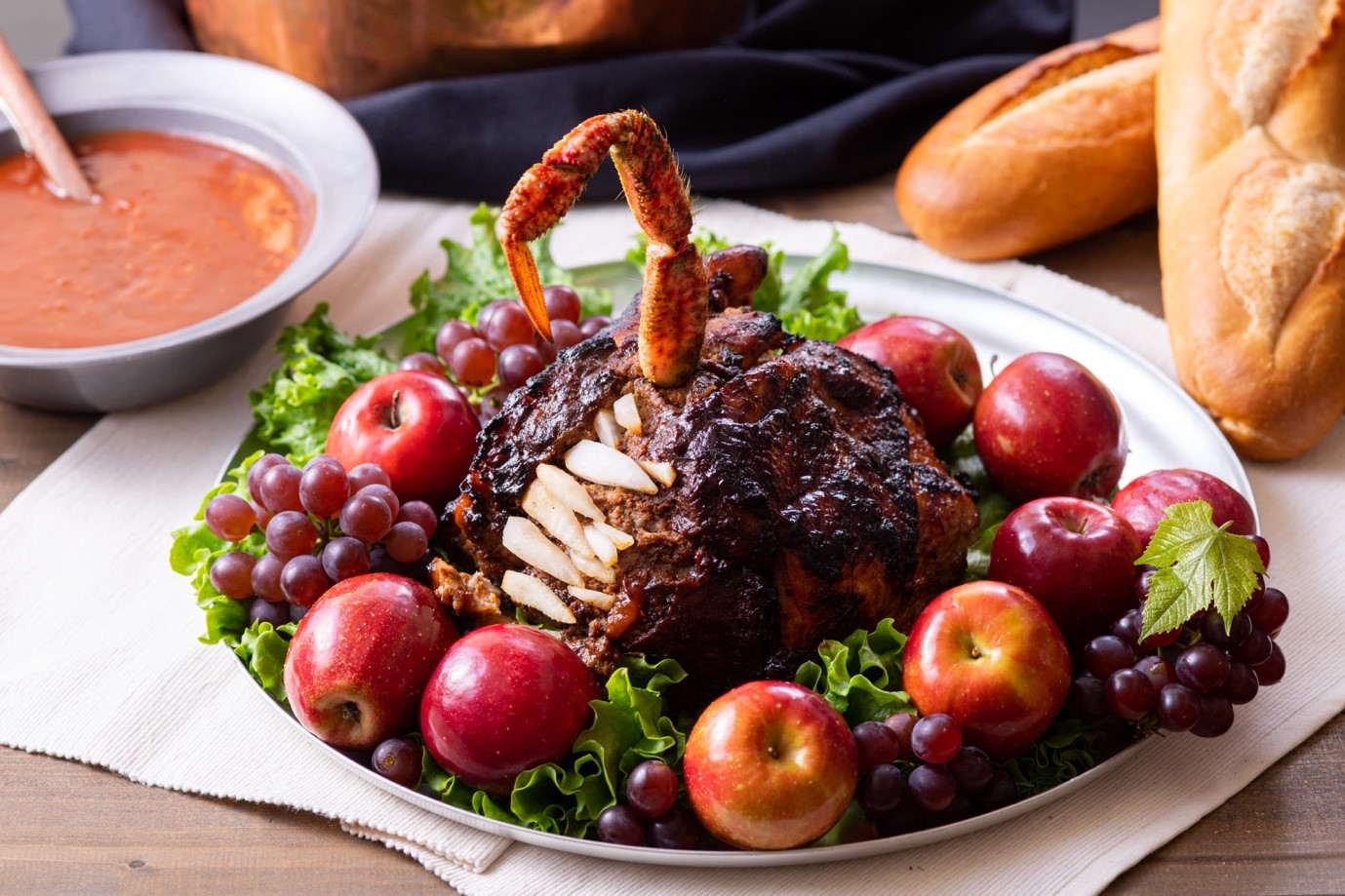 Chef’s Surprise – A Recipe From The Underworld Cookbook, by Asmoranomardicadaistinaculdacar

1. Remove excess skin and fat from the Maryland chicken thighs and pierce the skin with a fork. 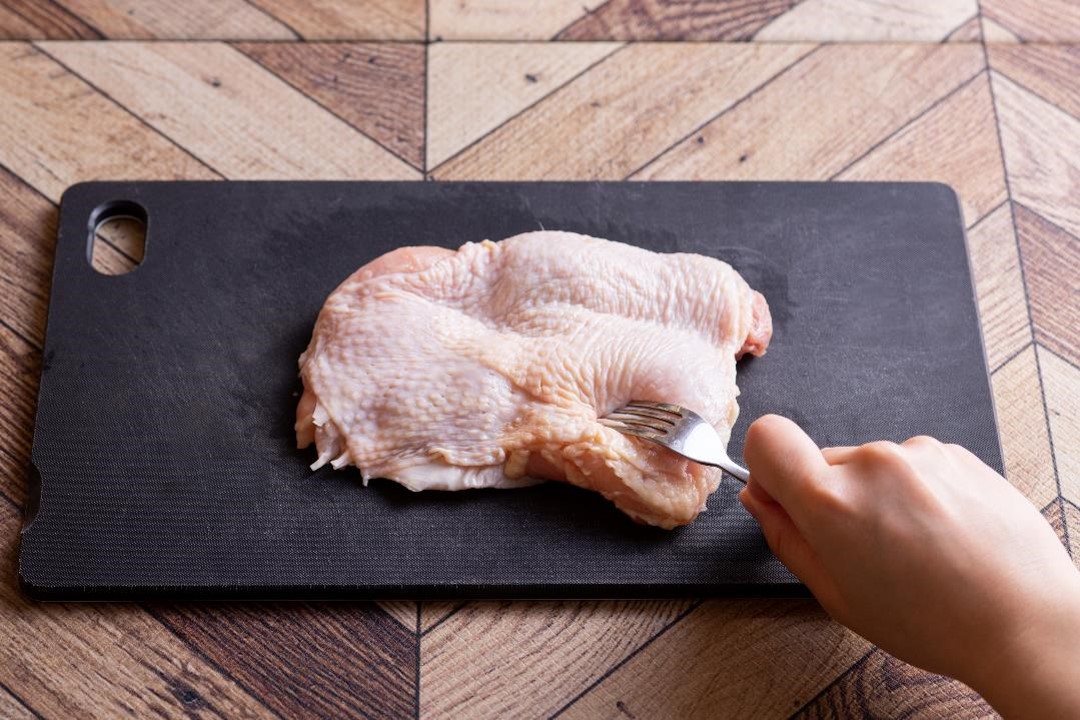 2. Combine all the ingredients for the chicken together in a bowl, rub thoroughly, and marinate in the refrigerator for at least 3 hours. 3. In a separate bowl, combine the ingredients for the stuffing and knead well until white, then refrigerate until ready to use.

4. Heat 1 tablespoon olive oil in a frying pan over medium-high heat, and place the marinated chicken thighs skin side down.

5. When browned, turn over and remove to a plate to remove from heat. 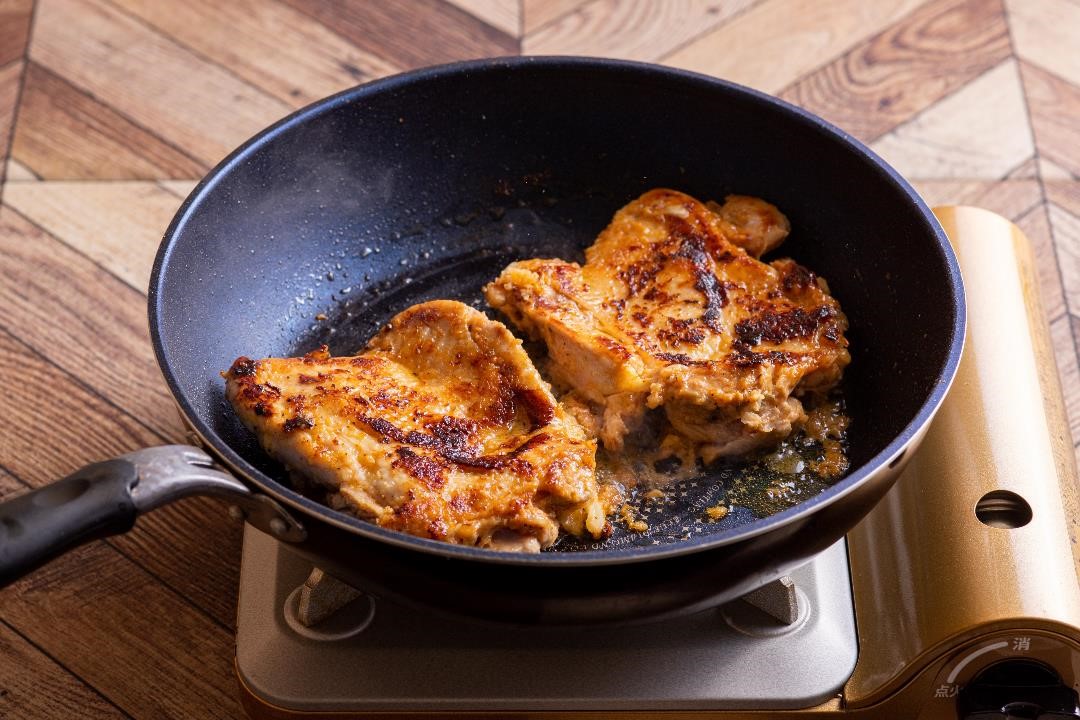 6. Remove any browned bits of meat from the pan, add the sauce ingredients and simmer gently to make a sauce. 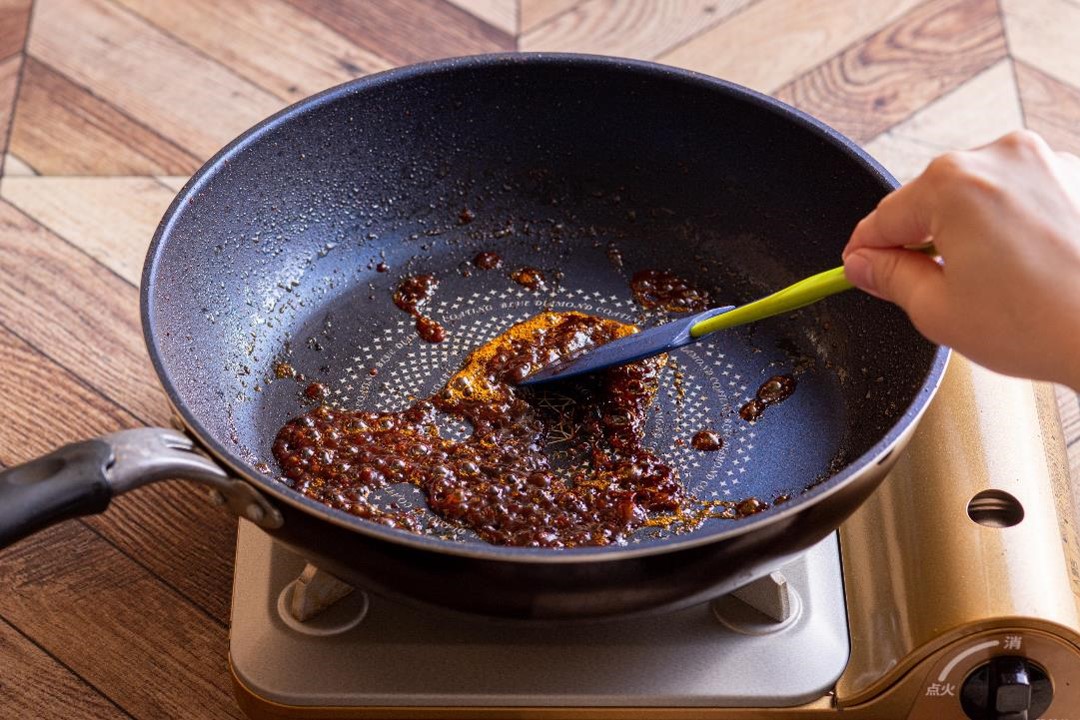 8. Cut the daikon into quarters (pending size of radish, may need to be thirds), then into smaller pieces to be shaped like fangs (image below). Create two sets of the fangs as shown below. One set will be used during the cooking process and the other for topping. 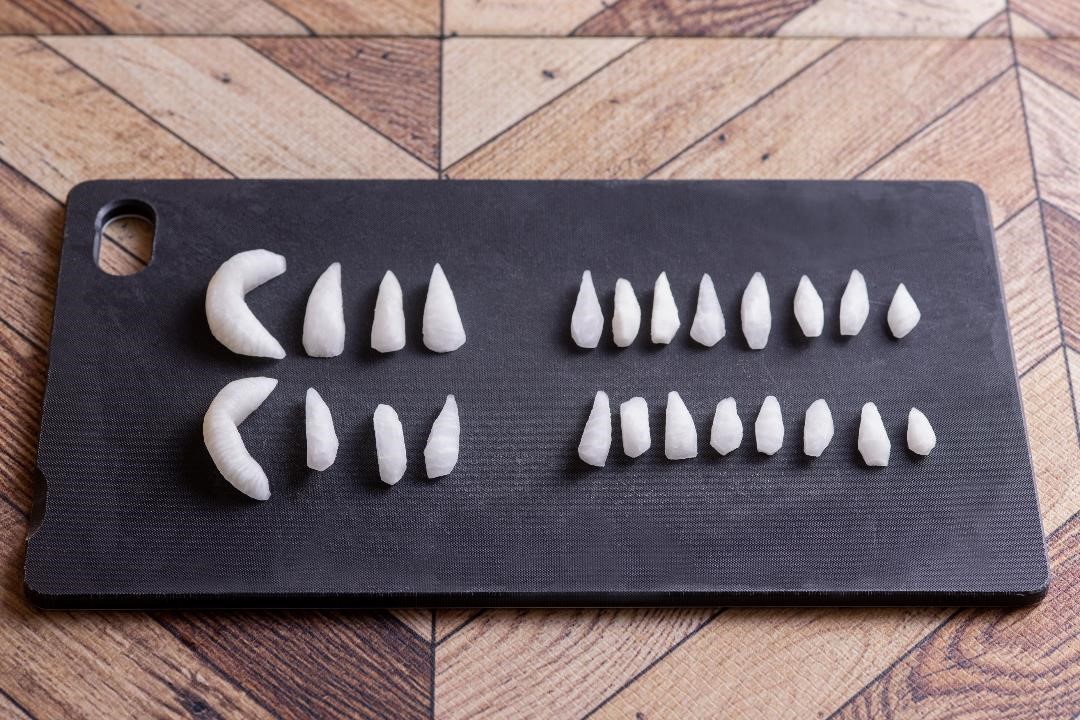 9. Line a baking sheet with parchment paper and use half of the stuffing to form a round base. Place the rest of stuffing on top of the centre of the base, in between the two chicken thighs (reference image below). 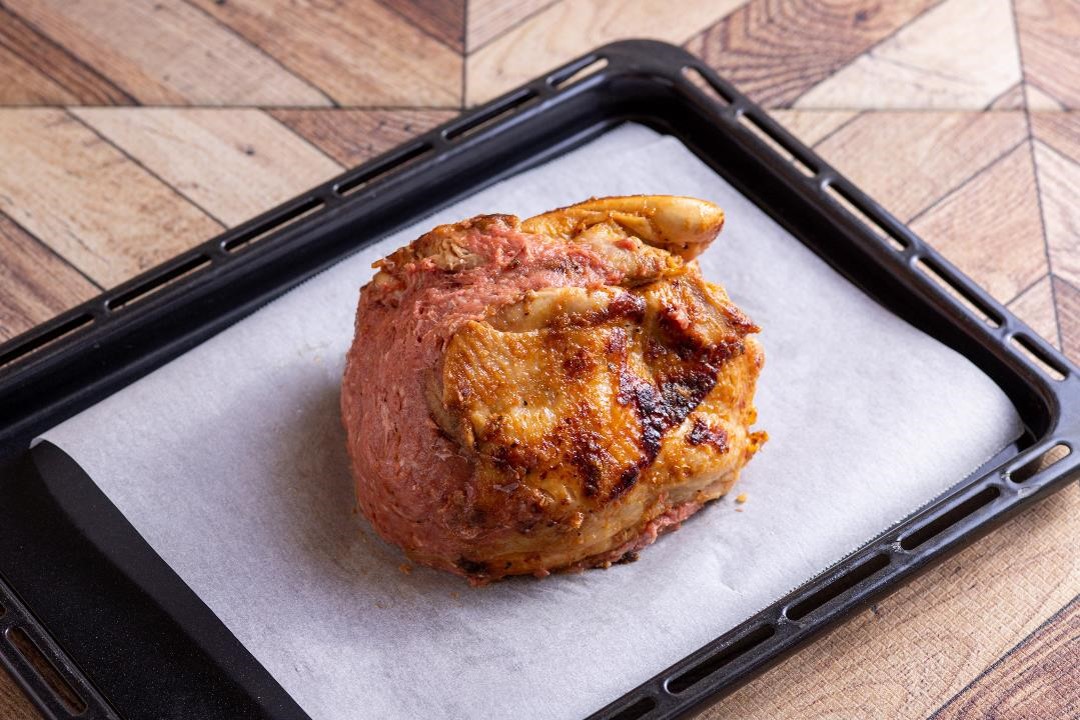 10. Fill the area between the two thighs where the stuffing is visible with one set of the daikon fangs. 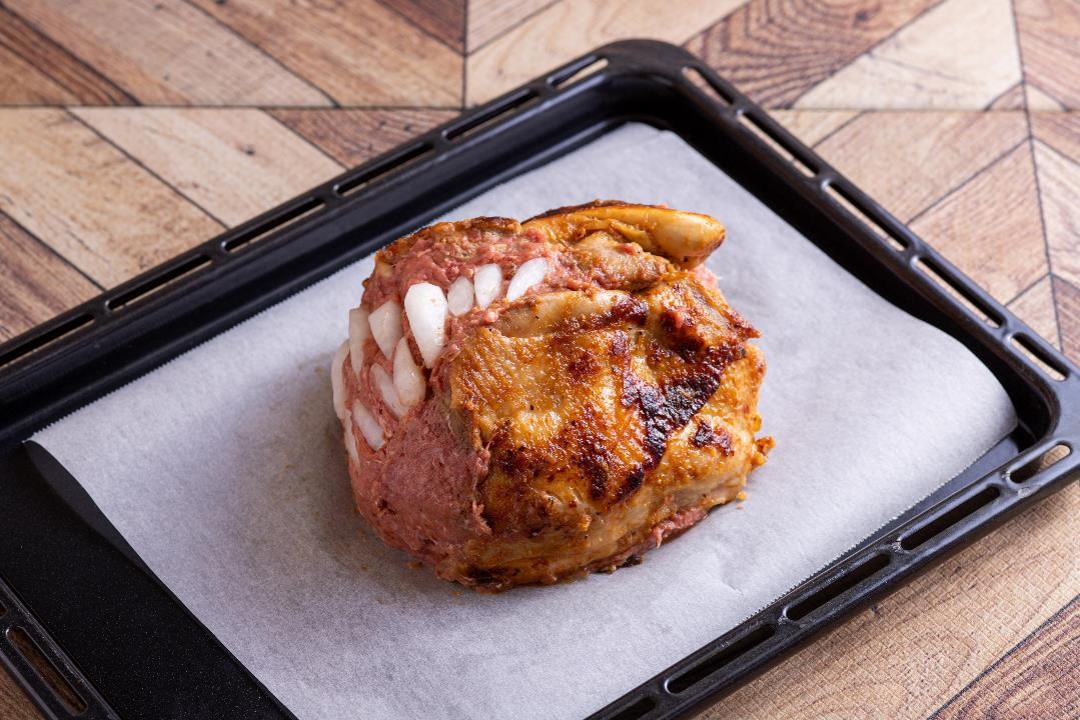 13. Remove the cooked fangs and replace them with the uncooked second set you’ve set aside.

14. Serve on a plate. Garnish with green leaves, grapes and apples.

15. Attach the fangs for finishing. Decorate with crab legs on bamboo skewers and you’re done! 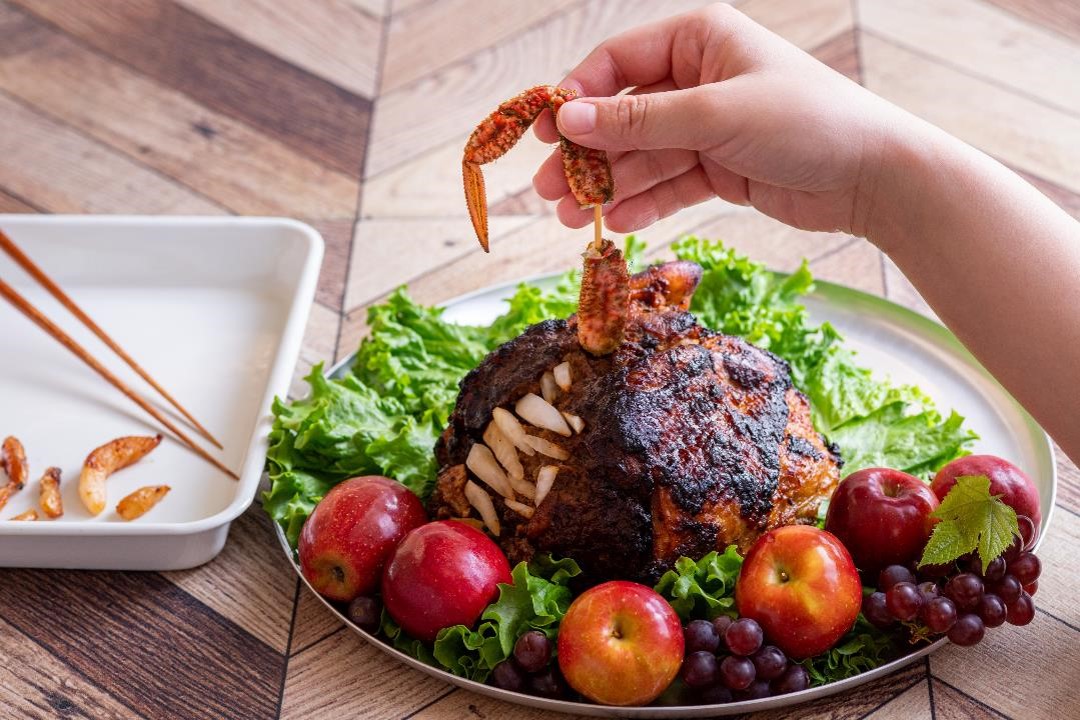