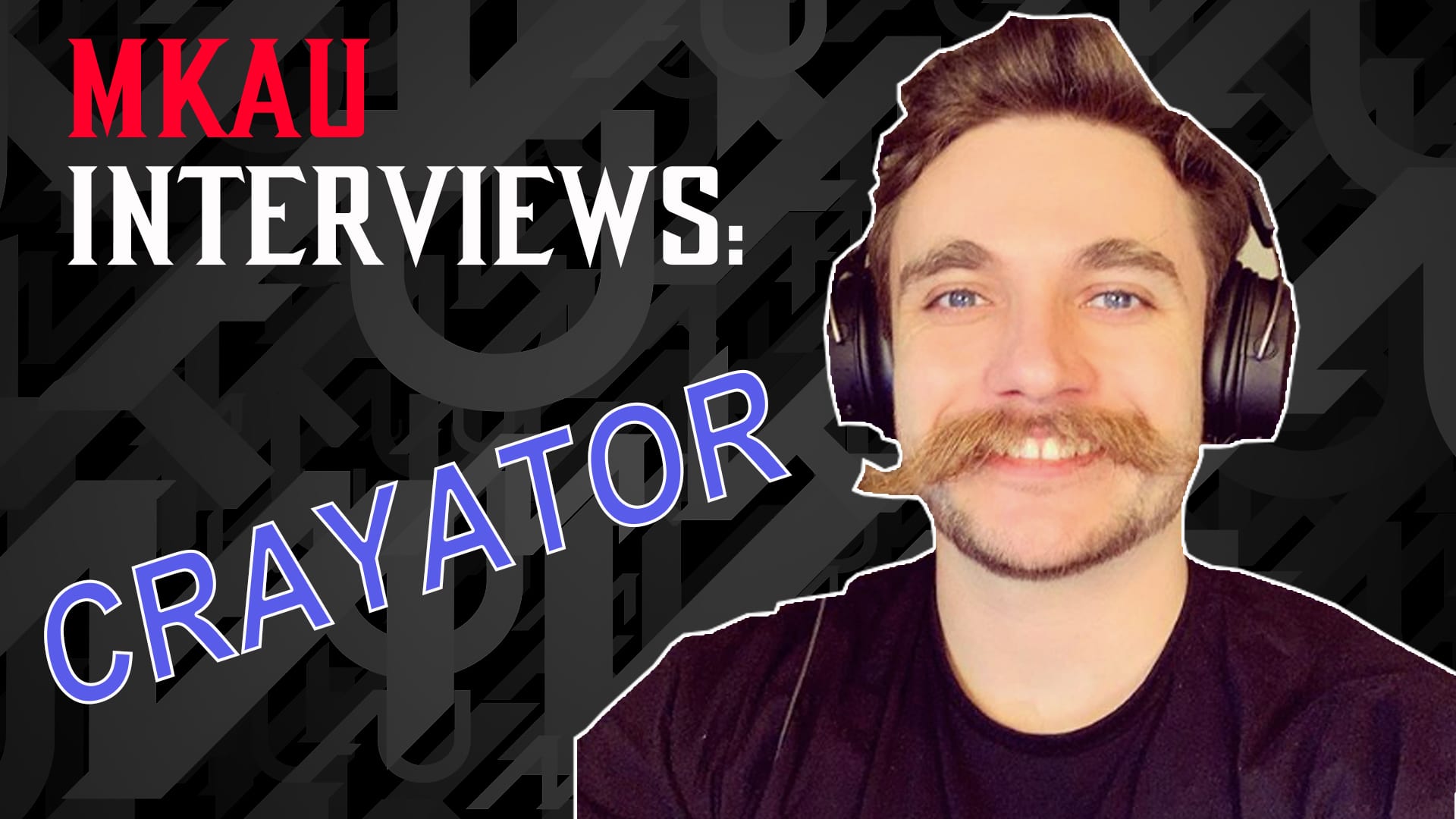 The Australian gaming culture is definitely on the rise, and who better to talk to about it then the one, the only Crayator. one of the young guys behind his desktop taking advantage of this trend.

Crayator has combined forces with Twitch TV to create some amazing & entertaining content, as well as working with The Kraken Black Spiced Rum as a Lair Lord and MKAU had the pleasure to sit down and ask Cray some hard hitting questions. Here’s how it went.

MKAU: 2020 has been quite rough, how important has it been to stay connected in an online world? Why was becoming a Kraken Lair Lord such a natural fit?

2020 has been hectic to say the least – for everyone! It’s forced me to think about what it is I want and need most to keep motivated, and yeah, staying connected with family and friends is so important. I love video games so there’s been a lot of that, being in isolation and all. Plus Netflix, I will have nothing left to watch by the end of the year god help me.

It was so cool to have The Kraken Black Spiced Rum reach out and want to get more involved with myself and my audience! I was already a huge fan of the brand but so far, we’ve been able to create some really fun content, and there’s definitely more to come. As a lair lord my role is share how you can stay social in the home, make an occasion out of it (with their new Kraken & Dry and Kraken & Cola of course), and that is something I’m 100% good at haha…the guys I get to work with are creatives in different industries too, to compare our lairs and ways of life has been a fun crossover.

MKAU: What games released so far in 2020 (or upcoming) are you most looking forward to?

So far, the best games for me have been Warzone, Doom Eternal, Animal Crossing, Minecraft Dungeons and Gears Tactics. I’m most looking forward to the release of Cyber Punk. It’s huge world and story building narrative are what get me excited. It’s made by CD Project Redd who created my favourite game The Witcher 3 so I’m a big believer in their ability to deliver a game with countless ways to play and enjoy. The moral choices and dilemmas faced are an interesting element too, anything along those lines I’m completely on board to try.

MKAU: What are your predictions on gaming trends for the future?

Bigger and better! We’re seeing a lot of development in AI and a lot of more mainstream players coming to the party. People are
making note of the growth of the industry and in a really positive way. After all, it can be a full time gig.
In terms of the games I see a lot more storytelling and narrative driven games (like The Last Of Us 2) coming to life. Something where it isn’t just about dropping in, eliminating players and taking charge. Making it more fun, more connected, more social. I’m excited to see the evolution.

MKAU: Do you prefer Streaming or making YouTube videos? Why?

I love both, but I think for the rest of 2020 at least, I’d like to focus more on my YouTube making. Playing video games all day may be somewhat bad for you but when I get to connect online with this content it all feels worth it. I have a following and this how I feel I can get to know them better.

MKAU: With current trends, do you see Streaming and YouTube getting even more popular?

Honestly, this is only the very beginning for both services. Streaming live is a great method of interacting with people and really forms a personal community with the people watching. Each streamer is unique and different, some loud, some almost dead silent to the point of being asleep haha…but it’s all community building. YouTube allows viewers to see how creative a content creator can be, whether or not that’s gaming related.

Call me crazy but it’s my belief that free to air TV will be out of date within the next 10ish years. Watching Streams and YouTube videos is just too easy and enjoyable in comparison to Television, is the next big thing.

MKAU: What got you into streaming?

Boredom, literally. I was so bored playing video games by myself that one day I asked my girlfriend of the time “Should I start streaming?” and she responded with a resounding yes. That, and when I watched other streamers I thought I could bring more to the table. I think that’s important in any industry or hobby that you want to pursue, looking at trends or what others are doing and thinking “Can I do this in a different way?” or, “Do I have something unique to add here?”. Those questions drive me every day to continue streaming and in many ways what pushed me to stick with it in the early days.

MKAU: With your streaming anniversary coming up soon, how do you plan on celebrating?

This may sound a little bit strange but I never celebrate my streaming anniversary, only new goals and new achievements. Although I owe a lot to starting streaming, I don’t see the act of starting as an achievement in itself if that makes sense? When I began streaming I kept doing it because I loved it, and that’s why I’ve kept going.

MKAU: What do your friends and family think about you streaming full time?

I was 22 at the time and my father really despised it initially Apparently, I was loud and annoying, who would’ve thought haha…But, my friends and family who didn’t have to live with me loved it and supported me to fullest extent. Not many people know this but I kept streaming a secret for the first 6-9 months. Once I had 4k total views and 1k followers I told everyone, I wanted to make something of myself before spreading the word that way there was a sense of ‘if I stop doing this, I’m only letting myself down’.

MKAU: What would be your advice on how to turn your tech hobby into a full-time gig?

Know that your attitude towards that hobby will change. When something becomes a full-time job, it’s no longer a hobby just by way of definition. So, when that transition happens let the hobby go and find a new one completely different to what it is you’re doing. For example, I stopped playing video-games away from streaming and YouTube. Why? Because I would burnout playing 12hrs+ a day. You might think (especially if you’re younger), that you could do that and you’d be able to keep up, but one thing I wish people understood about YouTube and Streaming is when games become your job, it becomes a whole lot more stressful. You’re no longer just playing the game but uploading a video that will hopefully get 1 million+ views. There’s a lot of pressure sometimes.

MKAU: What was your favourite game growing up?

Dungeon Keeper was my favourite game growing up alongside Halo! But honestly, when I was a boy all I did was play video games. I remember the local video shop (for all the young people reading, that’s a place you rent physical copies of a video game from haha, no such thing as steaming back then). I rented every single game at the local shop. Every. Single. One. When I ran out of games to finish I cried in the middle of the video shop, but then we just went to another shop 20 minutes down the road and I was happy again. I think I was roughly 13-14 at the time. Maybe a bit younger.

MKAU: Single player games or Multiplayer games? What’s your preference and why?

Both have something amazing to offer. It’s even hard to explain why you shouldn’t have a preference sometimes. Multiplayer games have truly shaped me as a person. I remember playing Call of Duty 2 online, getting involved in E-sports and chatting away with people over microphone and just laughing uncontrollably for hours. But, single player games gave me a sense of adventure and playing as people like Lara Croft or Master Chief made me feel like I could do anything. For a young man it was like watching a movie but actually being the main character and that makes you feel strong and powerful.

MKAU: Thoughts on the launch of Playstation 5?

It’s a bit weird looking isn’t it? Kind of like a wifi tower or something. Honestly though I think it’ll be a great release and I have faith in PlayStation, but will just wait to see the reaction. Sometimes I feel the release of a console can move away from what’s important, the video games. And personally, I’d love to see more video games. Always, more games.

MKAU: From Fortnight to GTA and a variety of other games, what has been the most memorable moment in your gaming journey so far?

Without a doubt, within my gaming journey the most memorable moments would have to be meeting people at conventions. I really have met so many crazy, out there people whether it be famous artists or musicians, or other YouTubers that I used to watch when I was younger like Markiplier.

Reaching 1 million subscribers after going through a really hard time in my personal life was a huge achievement that I’ll never forget either. I owe a lot to the people who created these games as they gave me my entire career.

A huge thanks to Crayator for giving us some of his time for a chat. If you’d like to find out more about what Cray is up to, be sure to head over to his Twitch & YouTube channels.