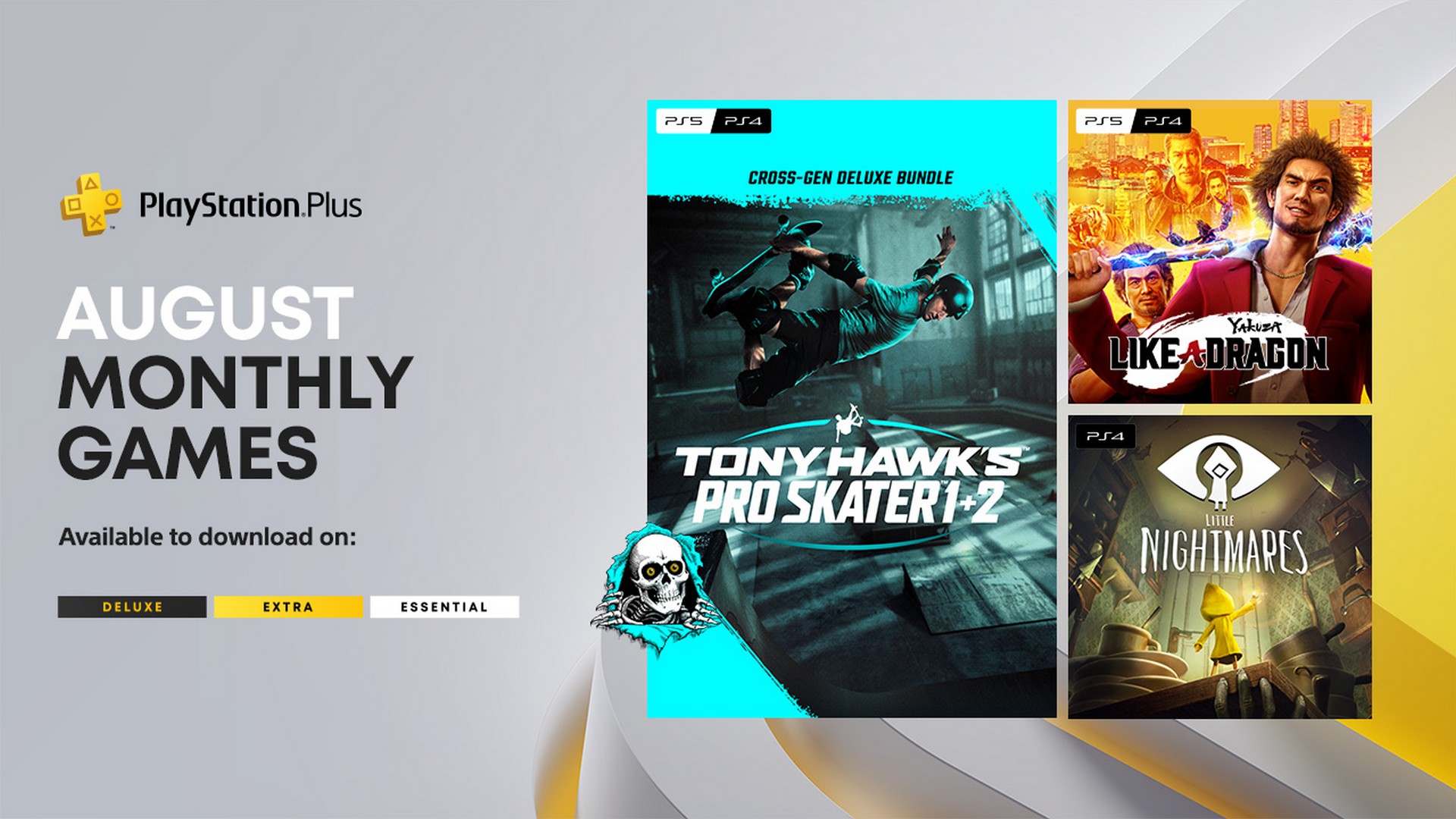 The PlayStation Plus monthly games lineup for August brings with it a hit of nostalgia, a taste of the underworld and an adventure into the world of nightmares! From Tuesday, 2 August, recent classics including Tony Hawk’s Pro Skater 1+2, Little Nightmares, and Yakuza: Like A Dragon will arrive on PlayStation Plus across all the tiers so everyone has a chance to jump in!

Additionally, the acclaimed Yakuza series will be coming to PlayStation Plus this year. Anyone who’s been intrigued by Sega’s long-running series will be able to experience its signature mix of crunchy combat, explorable districts, mini-games and fascinating storylines starting next month.

Let’s take a closer look at the games…

Skate to songs from the era-defining soundtrack along with new music, hit insane trick combos, or shred all the original game modes by going head-to-head with local 2-player modes! Strengthen your skills by taking your sessions online and competing against players from around the world in multiplayer modes and live leaderboards. Play as skaters from the original roster (Tony Hawk, Kareem Campbell, Bucky Lasek, and more) or slide into the new roster made up of Olympic skaters (Nyjah Huston, Aori Nishimura, Leticia Bufoni, and more). Watch the trailer below.

Immerse yourself in Little Nightmares, a dark whimsical tale that will confront you with your childhood fears! Help Six escape The Maw – a vast, mysterious vessel inhabited by corrupted souls looking for their next meal.

As you progress on your journey, explore the most disturbing dollhouse offering a prison to escape from and a playground full of secrets to discover. Reconnect with your inner child to unleash your imagination and find the way out! Watch the trailer below.

Yakuza: Like A Dragon and the entire Kamazu Kiryu saga | PS5, PS4

Level up from underdog to dragon in this action RPG. Ichiban Kasuga, a low-ranking grunt of a low-ranking yakuza family in Tokyo, returns to society after serving 18 years for a crime he didn’t commit. Uncover the truth behind his family’s betrayal while exploring – and fighting – your way across a modern-day Japanese city.

Build a party from a ragtag group of society’s outcasts, spending time with them to unlock new abilities and combo skills. Take time off from your quest to immerse yourself in go-karting, arcade games or 50 substories. Watch the trailer below.

PlayStation Plus Extra and Premium subscribers will also be able to experience Kazazu Kiryu’s epic journey through the criminal underworld with Yakuza 0, Yakuza Kiwami and Yakuza Kiwami 2 when the titles launch as part of the August Game Catalog lineup.

Finally, there’s still time to claim the great gamers from last month by Monday, 1 August which includes: Crash Bandicoot 4: It’s About Time, Man of Medan and Arcadegeddon. Watch the trailer below.