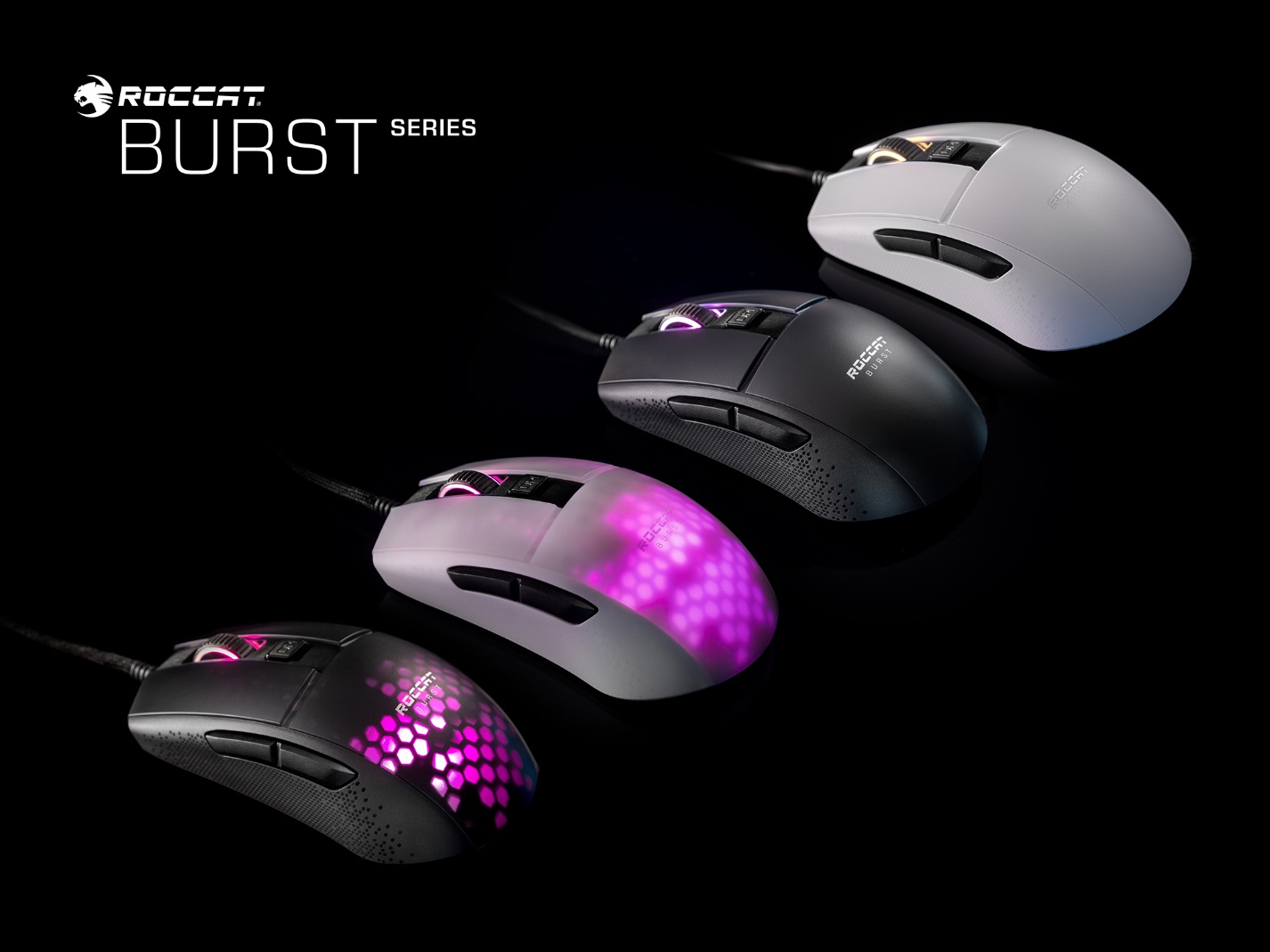 ROCCAT’s Burst Pro PC gaming mouse registers clicks up to 100 times faster than standard mechanical gaming mice, and the light-based switches also have a longer lifespan. The Burst Pro is designed with a new symmetrical and ergonomic shape, and its unique translucent honeycomb shell keeps the weight down to an extremely lightweight 68g while showcasing ROCCAT’s AIMO intelligent lighting like never before. ROCCAT’s Burst Pro PC gaming mouse is also the first to feature 100% pure PTFE heat-treated glides and a PhantomFlexTM cable for high-performing, unrestricted gameplay on any type of mousepad. The Burst Pro will be available at Australian retailers on 3rd November 2020 for an RRP of AUD$99.95.

“The Burst Pro delivers our latest, most responsive Titan Optical Switch technology in a symmetrical and extremely lightweight mouse that will give any PC gamer a speed advantage over the competition,” said René Korte, ROCCAT founder and General Manager of PC Products at Turtle Beach. “Beyond being one of the fastest and best-looking mice, the Burst Pro’s unique covered honeycomb shell makes it one of our lightest mice ever while the translucent covering provides an enticing showcase of our AIMO lighting and keeps the dust and grime out. You won’t find anything else like it.” The Burst Pro was born out of ROCCAT’s desire to create an all-new symmetrical mouse that utilises the brand’s latest technology while unleashing the full potential of its AIMO intelligent lighting engine. When it comes to PC gaming, speed is an extremely important factor, and the Titan Optical Switch delivers a quicker response rate up to 100 times faster than standard mechanical mice due to the ultra-precise light-based actuation, as well as a much longer overall lifespan of 100 million clicks. Further, the Titan Optical Switch also resolves the all-too-common “double-click” issue that traditional mechanical switches experience leading up to the end of their lifespan. To deliver the best possible performance, the Burst Pro also features ROCCAT’s Owl-Eye Optical Sensor with DPI adjustable up 16,000.

The Burst Pro is also the first mouse to feature a lightweight honeycomb design covered with a solid, translucent shell, and includes UV-coated buttons for added durability and protection against the elements. ROCCAT also focused on the side grips of the mouse by adding a glossy hexagonal texture, which makes for a perfect grip when combined with the UV coated buttons. The Burst Pro will be available in Ash Black and Arctic White, and the new design brilliantly showcases ROCCAT’s alluring AIMO intelligent lighting while also keeping the weight of the mouse to 68 grams.

To complement the exceptional speed and lightweight feeling of the mouse, and to offer gamers the feeling of total freedom of movement, the Burst Pro features heat-treated, 100% pure PTFE skates that will glide smoothly across any mousepad surface. To avoid using a mouse bungee and to offer a near-wireless experience, the Burst Pro also features the PhantomFlex cable, which is pliable and light, and virtually disappears during use with no tangling or bunching up.

In addition to the Burst Pro, ROCCAT has developed the Burst Core as another option that offers ROCCAT’s signature pro-grade technology at an attractive price. The Burst Core PC gaming mouse features an 8,500 DPI PAW3331 PixArt sensor and a solid honeycomb shell. The Burst Core will be available beginning 17th November 2020 for an RRP of AUD$69.95. 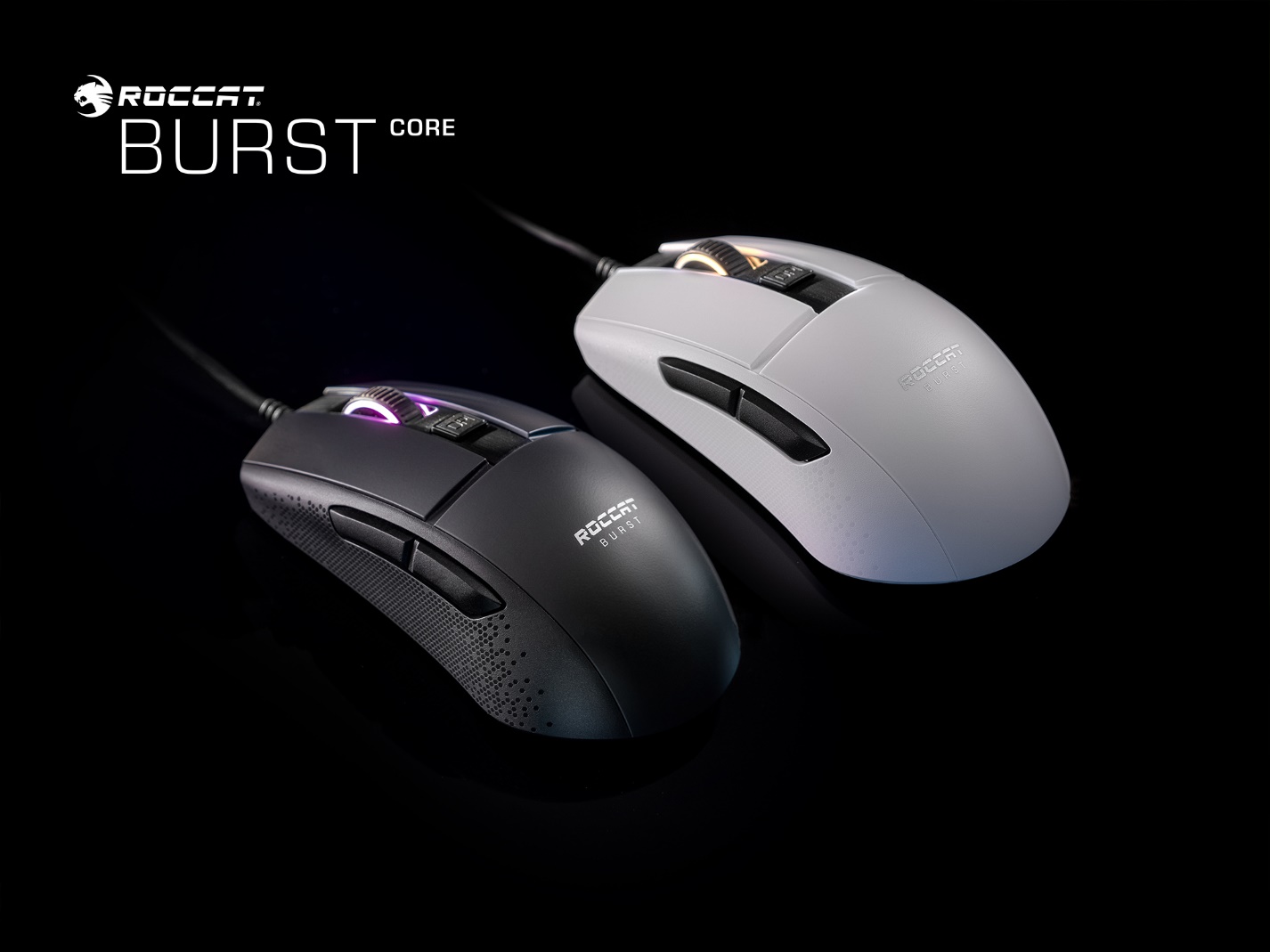