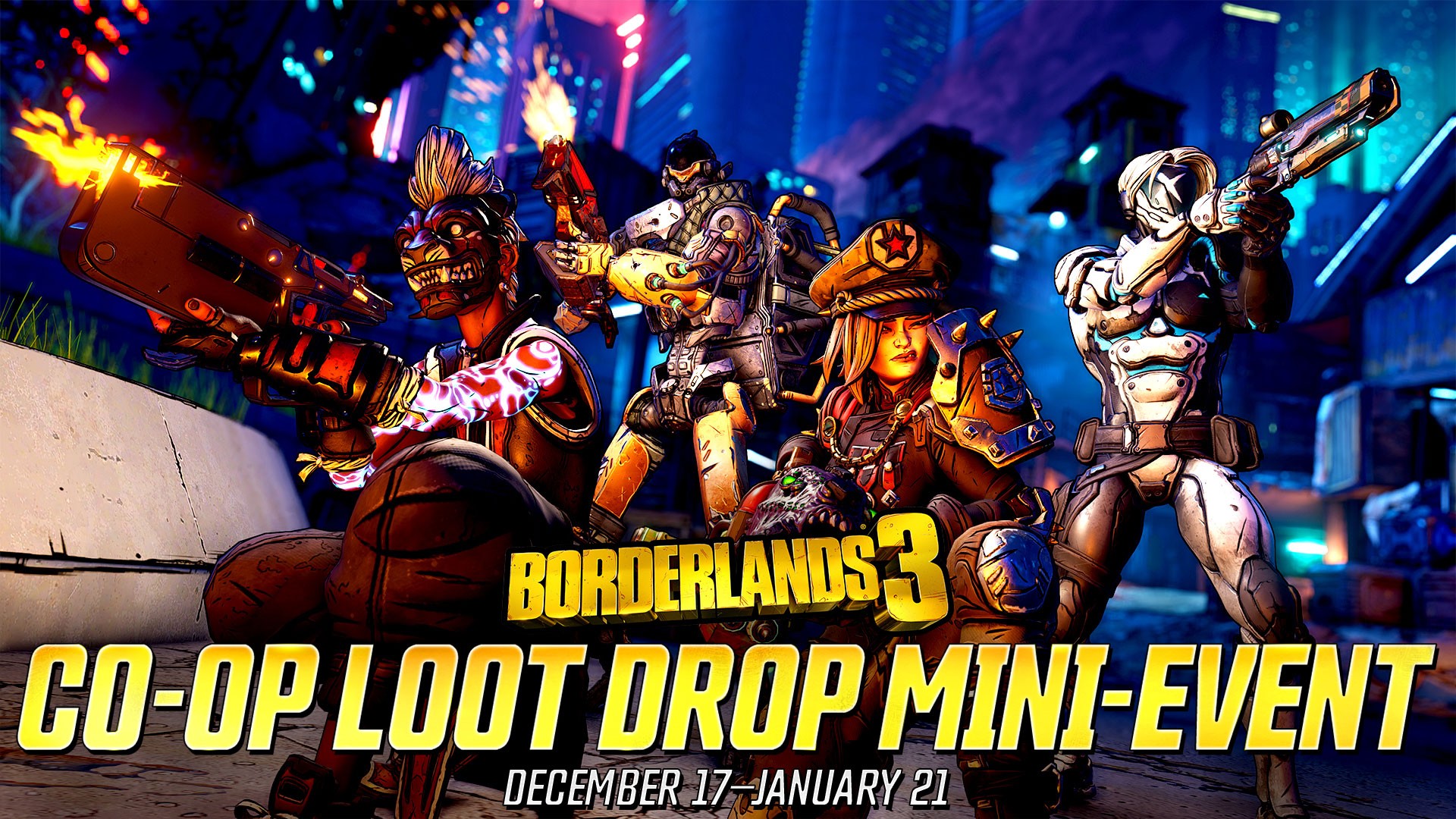 Vault Hunters who slay together stay together, so we’re bringing back Borderlands® 3’s Co-op Loot Drop mini-event! From December 18 through January 21, all Badass enemies will drop more loot than normal whenever you’re playing online or local split-screen co-op. Plus, the bigger your player party, the more loot that drops, making this the perfect time to boot up four-player split-screen for PlayStation 5 and Xbox Series X|S!

Co-op Loot Drop’s effects apply to all Badass enemies game-wide, including any you encounter in paid add-on content*: Moxxi’s Heist of The Handsome Jackpot, Guns, Love, and Tentacles: The Marriage of Wainwright & Hammerlock, Bounty of Blood, Psycho Krieg and the Fantastic Fustercluck, and even the Arms Race portion of the recent Designer’s Cut add-on (albeit at a slightly lower bonus rate for balance purposes).

If you’re playing with a new group of freshly minted Vault Hunters, the Co-op Loot Drop is a great way to gear up quickly. Meanwhile, more seasoned slayers can take advantage of the boosted co-op rewards in challenging endgame content like Takedown at the Maliwan Blacksite and Takedown at the Guardian Breach.

Whether you’re quarantined with pals or just gaming online, this mini-event offers quality bonding time with a multitude of mayhem-filled moments. Show those Badass enemies who’s boss and reap the extra rewards before Co-op Loot Drop ends on January 21, 2021.

Got a loved one who still needs a copy of the game? Then why not give the gift of mayhem this holiday season! If you want the complete Borderlands 3 experience, be sure to pick up Borderlands 3 Ultimate Edition, which is now available on PC, Stadia, PlayStation 4, Xbox One, Xbox Series X|S, PlayStation 4, and PlayStation 5. Ultimate Edition grants you access to the award-winning base game, multiple bonus cosmetic packs (including the recently revealed Final Form Cosmetics), and both the original Season Pass* and Season Pass 2.*

And just a reminder: Borderlands 3’s next-gen upgrade is now available for Xbox Series X|S and PlayStation 5. All players who own or purchase both a copy of the game and a next-gen console will be able to download the upgrade within the same console family for free. Players who own a physical disc of Borderlands 3 will need the Xbox Series X or standard PlayStation 5 console model that includes a disc drive to take advantage of this feature.

Borderlands 3 is available now on Xbox One, Xbox Series X|S, PlayStation 4, PlayStation 5, Stadia, and PC via Steam and the Epic Games Store.