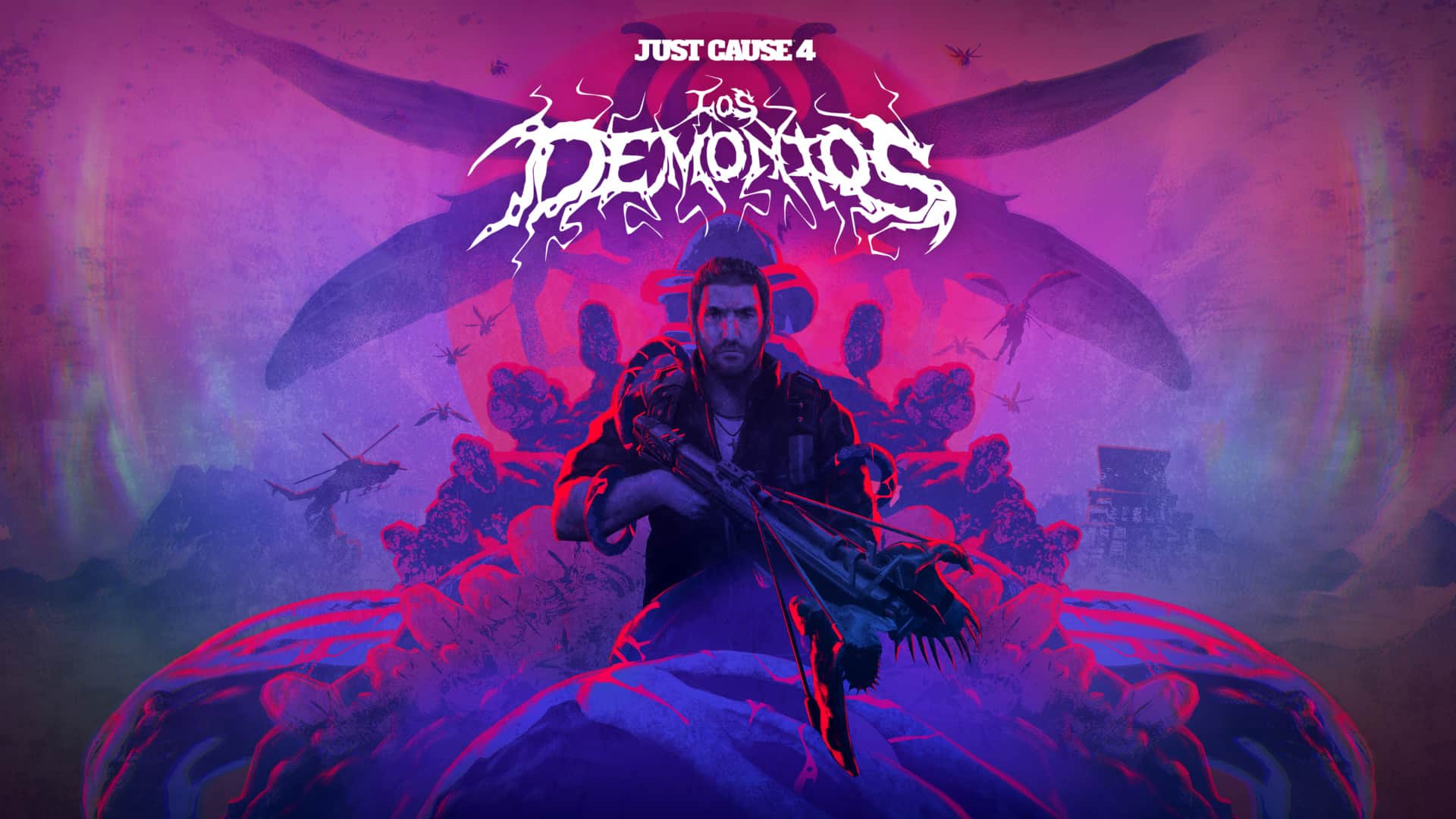 The premier over-the-top action sandbox experience gets even crazier! Prepare for an all-out battle against the demonic forces from an ancient past, in the all-new Los Demonios DLC for JUST CAUSE 4, releasing July 3rd, 2019, on XBOX ONE®, the all-in-one games and entertainment system from Microsoft, PlayStation®4 computer entertainment system and Windows PC.

When Rico & Javi, investigate a newly discovered temple off the shore of Solis, an archaeologist working with the Black Hand unexpectedly releases an ancient demonic force from its imprisonment.

A parasitic infestation now spreads across Solis, terrorizing its inhabitants and attacking any Black Hand forces that stand in its way. Rico must tackle a horrifying new threat and seek out answers to eradicate the demon invasion from the island permanently, before it’s too late!

Discover a completely new sandbox gameplay experience with Los Demonios, as demonic hordes, pulsing tendrils and spore-filled clouds infest the towns and people of Solis in an exciting new supernatural addition to JUST CAUSE 4.

Face the demons across new missions that will require all the skills and tools at Rico’s disposal to emerge victorious. Vicious demons spit corrosive projectiles, possess soldiers, and even take over military vehicles and turn them against Rico.

Seamlessly integrating into the JUST CAUSE 4 sandbox, the new missions enhance the crazy open world experience further and provide a return to the popular liberation gameplay of the JUST CAUSE 3. Introducing new weapons and equipment to unlock, including the Demon Crossbow and Demon Egg Supply Drop, Los Demonios lets you take the new tools of destruction into the open-world sandbox of JUST CAUSE 4 for explosive new action packed moments of glorious mayhem.

“Los Demonios is the second DLC pack in the ‘Dare Devils, Demons and Danger’ Expansion Pass, and it brings a totally new experience to JUST CAUSE 4,” said Bryan Rodriguez, Creative Producer at Avalanche Studios. “For the first time, Rico is tangling with an otherworldly threat that will push him to his limits. This is our chance to see if Rico is as good at squashing demons as he is at toppling dictators!””

The JUST CAUSE 4 Spring Update is in full effect! JUST CAUSE 4 has improved vastly since launch, with improved graphical elements across the board on all formats, as well as gameplay tweaks for a smoother player experience. Today, a massive patch rolled out that completely changes the world lighting, improving the way light interacts with the environment and bringing considerable visual upgrades to the JUST CAUSE 4 sandbox world. In addition to this, it also includes destructible statues & train bridges, new chaos objects to destroy in the open world, more ammo and a dialled-up ‘heat’ system that will have the Black Hand challenging Rico like never before.