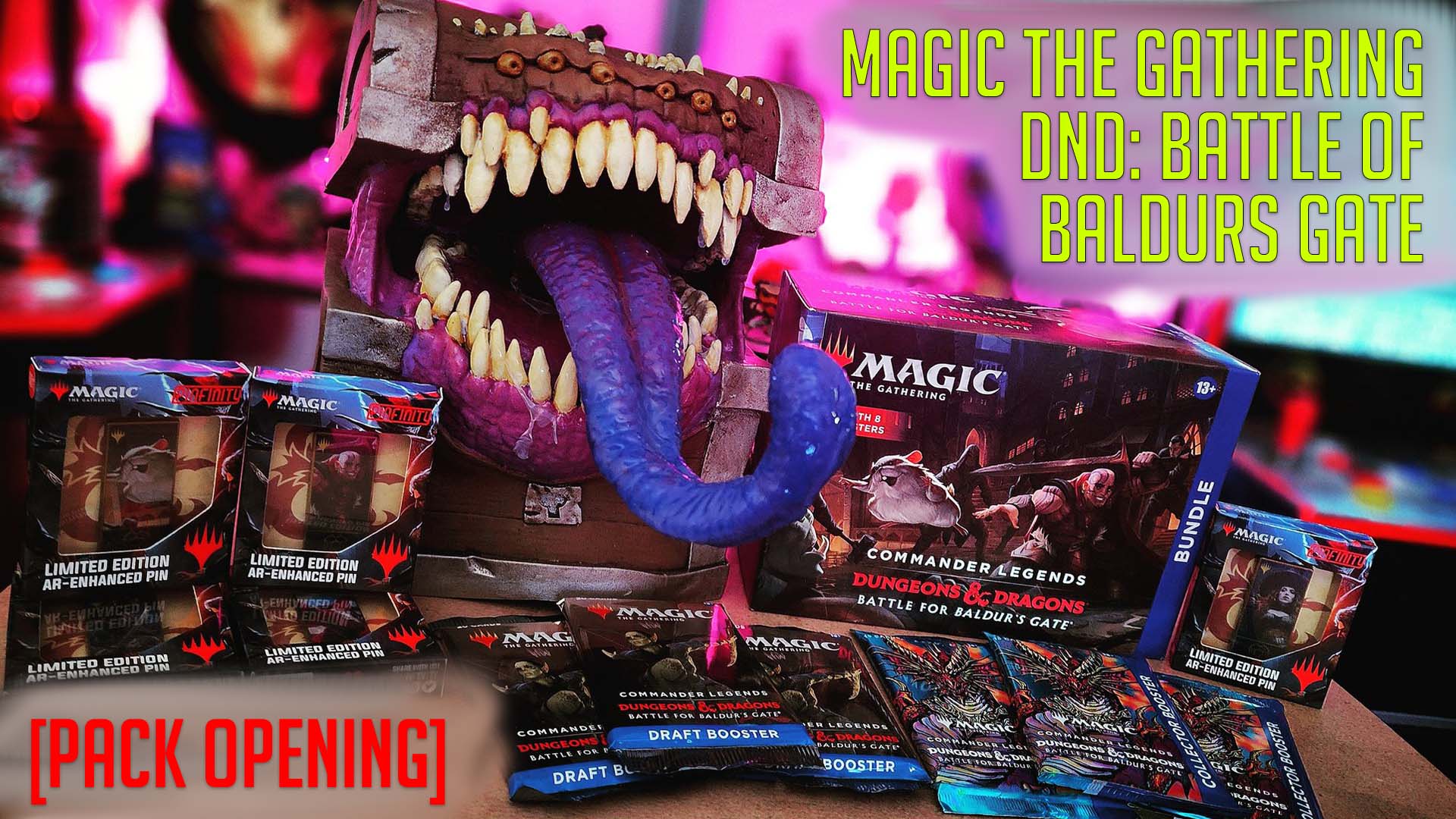 It’s always exciting when the boss-man tells me there is a package from Wizards of the Coast. I never really know what I’ll be picking up, and it has a way of teleporting me back to my early high school years, back before I was working, and I’d spend my pocket money on trading cards, eager to get home and tear the packet open. It was also about this time that I was playing Baldur’s Gate on the PS2 with my younger brother, and we dropped hours into that game, collecting the best armours and gems before restarting the game and doing it all again.

Those memories came flooding back as I collected the fantastic care package from Wizards of the Coast; the new Magic Commander Legends bundle, Battle for Baldur’s Gate. Packed with eight set boosters, forty land cards in a half-and-half mix of foils and normal cards, and an alt-art Wand of Wonders card, there was a lot to take in. On top of this, we were given three collector boosters containing fifteen cards with a higher chance of pulling the rare mythical foil borderless Plainswalkers and another three Draft Booster packs containing twenty random cards.

All two hundred and sixty-five cards are themed around Dungeons and Dragons, and more specifically, Baldur’s Gate, and as usual, the artwork is incredible. As I mentioned in my unboxing video, which you’ll find below or on the MKAU Gaming YouTube channel, some of the land cards look like they could be real-world locations with how detailed they are, even on something as small as a playing card. In addition, the foils in this series really caught my eye, with one particular card using the holographic flare to enhance the magical appearance of the spell in question, almost giving it a glowing effect.

This new set also sees the release of a new series of limited edition Augmented Reality pins from Pinfinity. Featuring the main characters from the box art, including the ferocious hamster, collectors game enough to pull the pins from their boxes will be able to scan the pins and watch them come to life on their mobile device with several different AR features. I so desperately wanted to crack them open and have a play with them, but one of us here at MKAU Gaming is an avid pin collector, so I will probably refrain from damaging the box and give the five we received to them instead.

The whole Commanders game mechanic is utterly alien to me. While I have amassed quite the collection of cards over the years, I haven’t played a single game in nearly 20 years. In saying that, I have seen a variety of new releases, as well as a few rereleases, and I am continuously amazed by the high-quality art used to portray the characters and spells. What’s more, it is incredible how they are able to collaborate with and include other game mechanics while still feeling like their own system. So again, I am thrilled with this new set, and I am now even more excited for the August release, set to combine another two of my favourite systems from my teenage years.