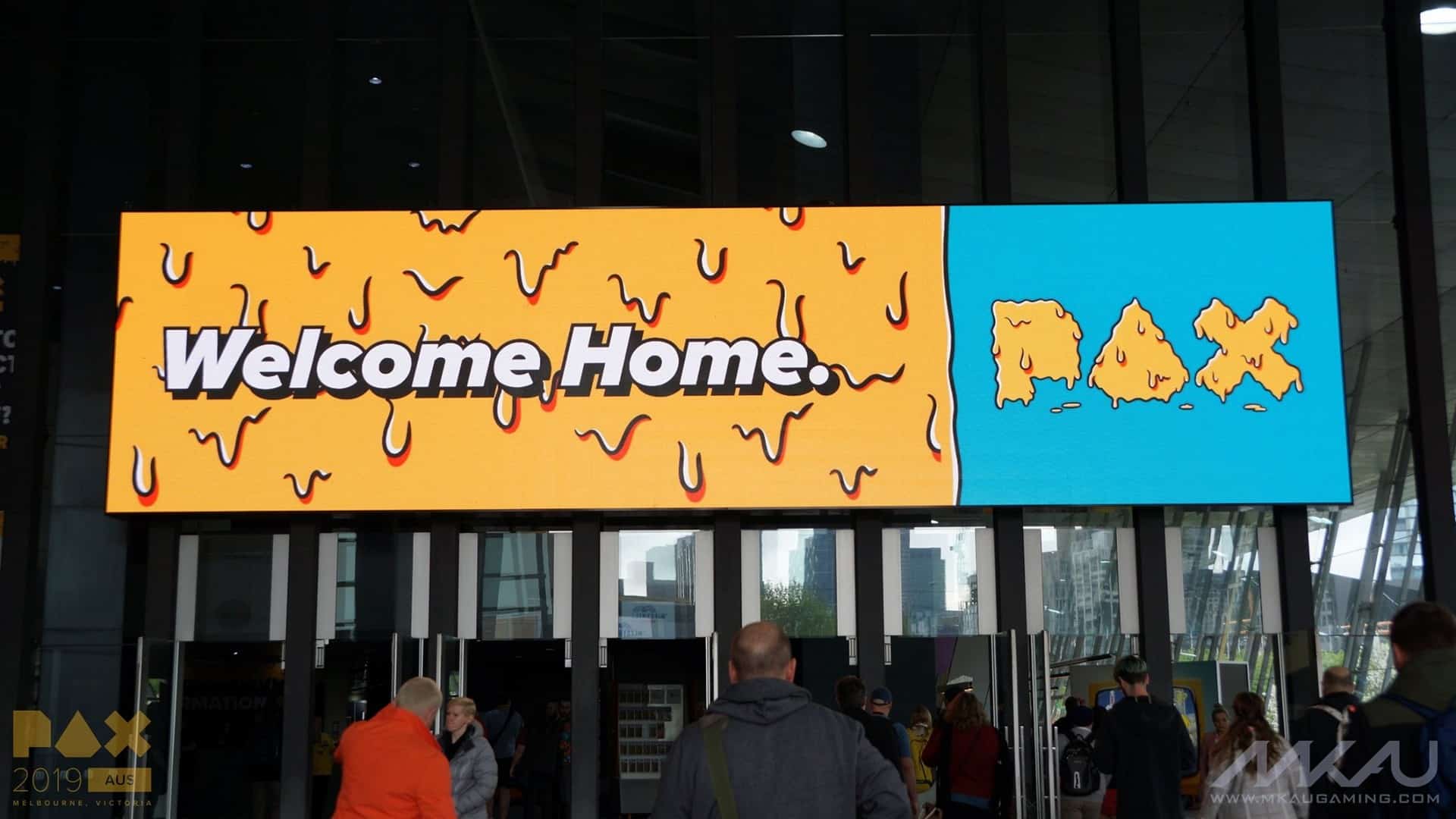 Every October, the air is alive and buzzing with excitement at the MKAU headquarters; it could only mean our annual PAX trip is upon us and we get to unite with our own community but also with others in the business. Every convention and what it has to offer is important to us, but PAX is the pinnacle of gaming content in Australia, since the collapse of EB Expo last year. So, with our bags packed, we flew down to Melbourne, for some, our first PAX, but one of many for MKAU as a crew.

“If you love games, you’ll find a home at PAX”, in the words of the PAX website, I couldn’t say it better myself. Gaming is that safe place for a lot of people, an escape into a different world and PAX is one convention that is literally like stepping into another dimension. Including the smell of sweat, neon signage, wide eyed faces and loud, animated conversations in lines, PAX encompasses everything gaming is about; bringing people together. At conventions there is always some sort of sense of community. Whether it be gaming, cosplay, nerdy pop culture, or even just a civilian that is curious, we all belong in some sort of group, and you can find it all here. At PAX as a gamer, it is just so comforting to be a part of this community.

So, what is a ‘PAX’? Originating in America as the famous ‘Penny Arcade’, in 2004, and having been on the golden shores of Melbourne for a few years now, it is one of Australia’s biggest gaming conventions. This 3-day celebration of anything in the world of gaming culture, has everything from retro appreciation, table top play, cosplay, up and coming new releases, tournaments, and panels. 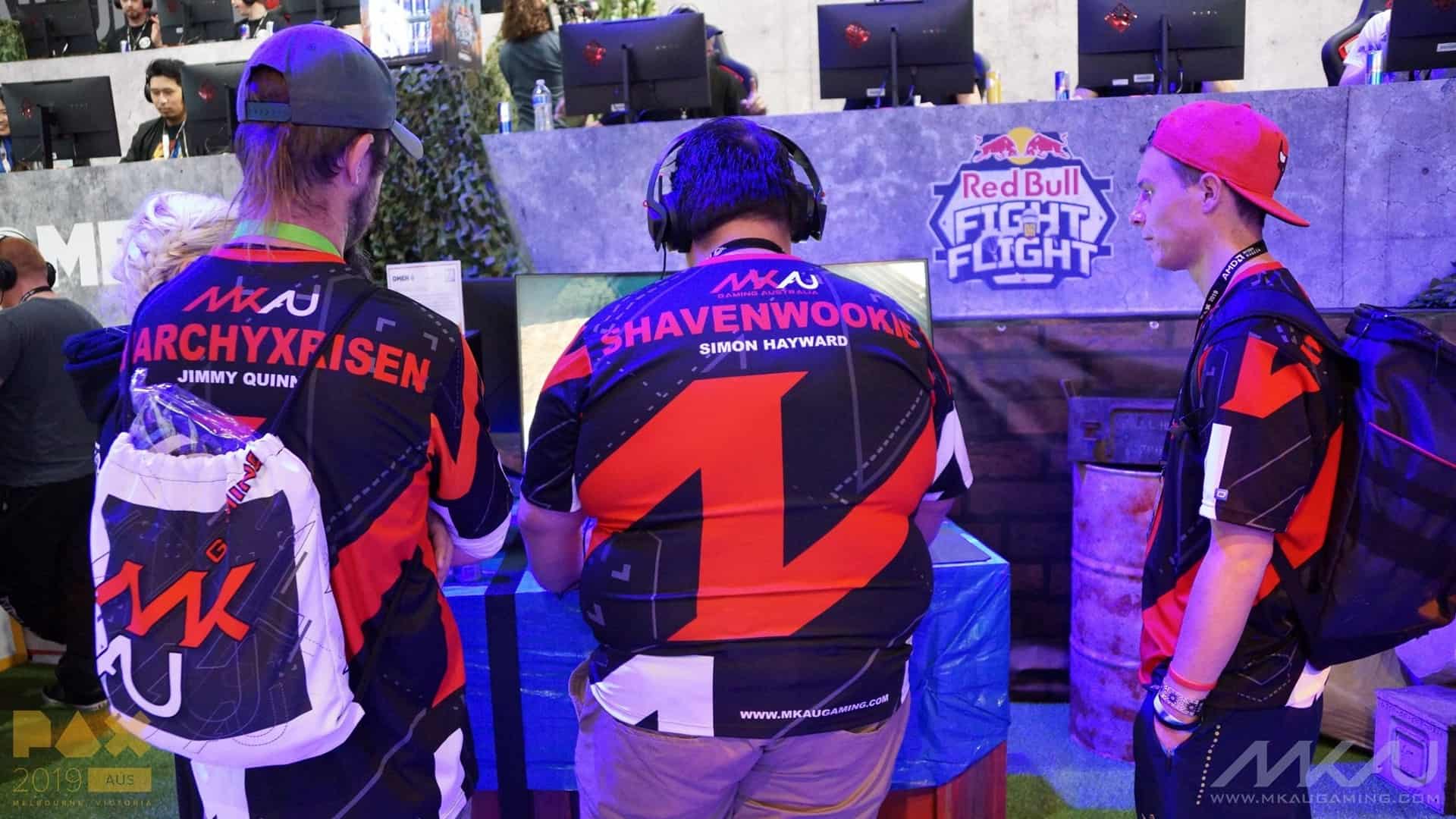 This is our experience of this weekend;

For a Friday; a work day, the halls of the Melbourne Convention and Exhibition Centre were alive with the buzz of excitement. Even with early access to the hall floor on the Friday, booths were energetically primping and adding final touches to their displays ready for the influx. The floor was enormous, well-spaced this year with every booth, stall, stage and riggings, immaculately set out. Even on the Saturday when the convention was SOLD OUT, not once did I feel bottled necked in the crowd, especially compared to last year.

We started our first day off at the PlayStation booth, with Activision inviting us to an early pre-open hands on with the Call of Duty: Modern Warfare BETA. An enjoyable reminiscent experience, the frustration was real as I got destroyed by my boss, trying to carry another content creator on my team. We were hooked and often came back over the three days, to exact my revenge.

Most of the day was spent getting a feel for the place, since it is such a huge location we found it hard to find the right rooms for panels as it could be a ten-minute walk or even longer, with so many good distractions along the way. The ‘Enforcers’ had their fingers on the pulse though and were easily able to point us in the right direction every time. 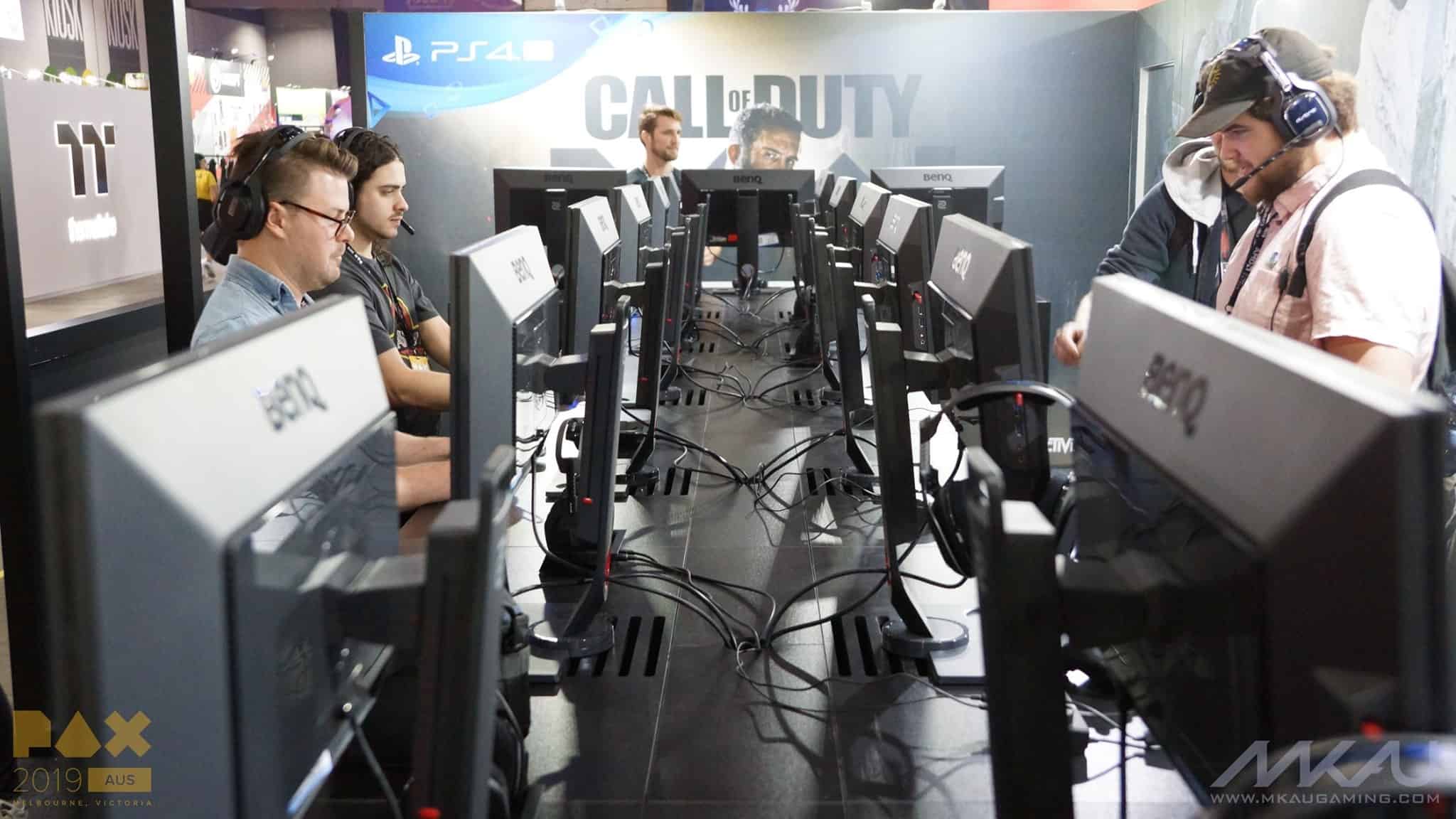 Sadly, not having a booth this year, we met with HyperX for lunch and a product talk through. Supplying quality products and recently signing famous Australian streamer ‘Lachlan’ it was exciting to see what their future had to offer. Revealing a number of new innovative products, from a range of comfy looking mice, their own signature key switches for their alloy keyboards and a premium headset to come, HyperX are in for a big year in the peripheral department, and boy do they look slick.

Rounding out our day was our first panel, The infamously comical, Bethesda Trivia Night. Hosted by the hilarious, Dan Crowd, with a panel of equally interesting influencers, developers and MMA star, Robert Whittaker. While we followed along with the questions and with the antics, it was a shame the audience was not involved more. The laughs were plentiful though and the panels answers impressive.

Day 2 was definitely one of our busiest days. Getting over to Alienware first, we were introduced to their amazingly sleek and powerful line of products at their crisp, clean and open booth. With a plethora of shiny products on display you couldn’t help but notice a variety of peripherals such as their headsets, mice and powerful and promising M15/M17 gaming laptops. If you’re after a laptop with the power of a desktop, this is definitely your place for gaming on the go! So impressed were we, that MKAU was invited back later in the day to have a play and get a feel for their products. For more in depth looks into upcoming projects, Simon ‘ShavenWookie’ Hayward will be posting a breakdown of what peaked his interest and the specs of what to look out for by Alienware in the future. 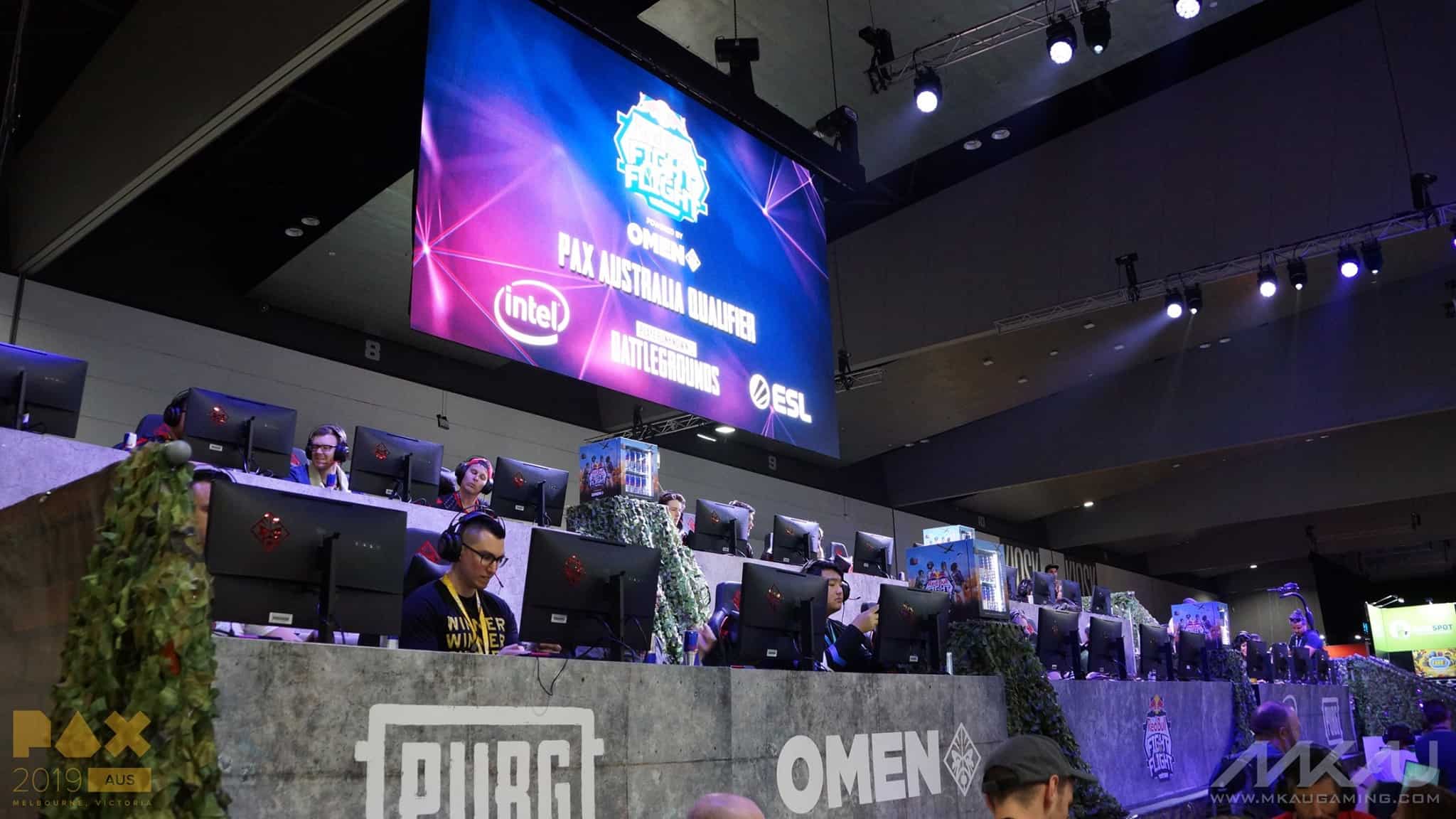 Riot Games is getting ready to celebrate 10 years of League of Legends and our reviewer, Melekarn, was fortunate enough to be invited to an exclusive luncheon, complete with a Skype call from their Principal Games Designer, Paul Sottosanti. While most content was under a non-disclosure agreement, he can safely say and suggest you should watch the Riot Games Twitch channel (twitch.tv/RiotGamesOCE) from 11am on the 16th of Oct, 2019, as they celebrate LoL’s 10 year anniversary with a bang!

A special thanks to Omen and RedBull, for letting our very own ShavenWookie and Niko go to battle against a variety of media, content creators and Esports Stars in an influencers tournament of PUBG: Fight or Flight. Coming out a salty 4th out of 6 teams, they made a solid effort in this fast paced, highly competitive PUBG game mode. It was one of the most tense and exciting events of the weekend.

Last year, Nvidia introduced to us their new RTX series graphic cards, boasting about how they will change the way developers create and how players view games. This year, they showed off just how far they have progressed, as more and more developers jump on board and start using this awesome piece of technology. We can look forward to seeing more titles supporting lighting techniques used in feature films, with the recently released game ‘Control’ being the current poster child. Real -time ray tracing will have you feeling more immersed and forgetting that you’re playing a video game. 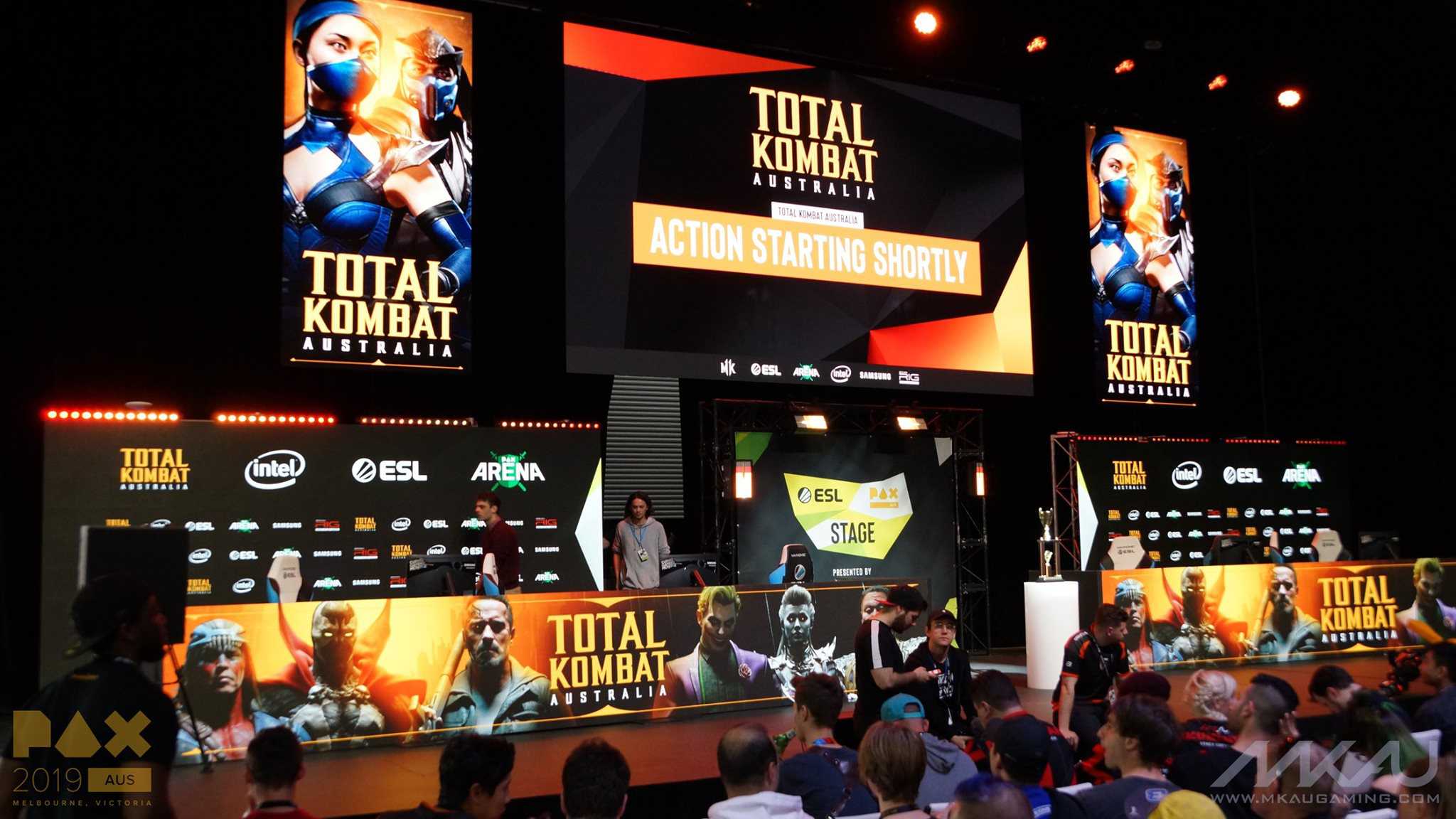 One of the highlights of the trip and a great way to end the day was the Mortal Kombat Australian Championship Tournament. An 18+ event, I got sick satisfaction watching all the juniors get kicked out of the event as free beverages and food were rolled out. Nestling a good beer, the tournament kicked off, full of cheers, laughter and failed fatalities. Whilst a very long display of skills, it was an awesome time with an awesome atmosphere with impeccable hosting. Definitely a standout moment from Warner Bros. as ‘Wazminator’ successfully and easily took the title.

As the last and final day set in, we still had a lot to do. As DOOM Eternal rips and tears its way from its original release date of November to now early 2020, we just had to get our teeth into this highly sort after game. We found our way into a hands-on gameplay and we were blown away by the overwhelming blood and guts filled experience. This demo was not afraid to turn in up to 11 with a huge variety of weapons and enemies along the way. Unfortunately, our experience was cut short as we went over the allocated play time, but in what time we did have, I was offered a blood fueled treasure trove view of what was to come!

Leaving the Cyberpunk 2077 live gameplay till the last day was a huge mistake, as much to my annoyance even an hour early the line was capped and we weren’t allowed in. Irritable as it was the one thing I wanted to see the most the whole weekend. Fortunately, thanks to our friends at Bandai Namco we were given the opportunity to interview CD Projekt Red’s, John Mamais.

As Wookie’s very first interview, you could feel the immense excitement and nervousness radiating in the room as he was about to interview the Head of CD Projekt Red’s Krakow office. Talking all things about the fanatically hyped ‘Cyberpunk 2077’, from the lore through to how they have grown from a studio since the Witcher series, this is one interview you should head to our YouTube channel and check out.

After attending the last three years of PAX events, I can confidently say this was the most organised, entertaining and content driven convention I have been too. I thought overall, PAX AUS 2019 had really kept an eagle eye on the trends and current events in the gaming world, and delivered a convention that had something for everyone. I can’t wait to see what 2020 has in store for this ever-growing industry. Once again, well played and GG ‘Yug’, see you next year Melbourne!

If you’d like to check out all our photos, cosplay and highlight reels from PAX Australia 2019, you can do below.