By StacefaceMayhem on February 25, 2019 on Reviews, 6 More
Tweet
No Comments

I’m very hit and miss with grindy game play. Where as I was right into the ‘Diablo 3’ and ‘The Division’, even needing eye drops after a 14 hr session once, I totally missed ‘The Destiny’ train. I’d also like to point out I’m very hit and miss with Bioware games too. I ate up all the ‘Dragon Ages’ but skipped out on the ‘Mass Effect’ hype. In saying this, the point of this little anecdote is the fact I went into this review with a completely open mind. So, will Bioware’s Anthem also be a hit or miss for me?

The Anthem of creation. The element that has a fountain of power, can shape creatures and landscapes and desired by all the greedy factions of this serene world named Bastion. The heroes of this story are the humans willing to be ‘The Freelancers’, warrior like soldiers that control mech suits called Javelins, who protect and destroy the unstable Shaper Relics that harness this mysterious energy. After a failed mission to protect one such Relic, we flash forward 2 years to the tall walls of Fort Tarsis, as you guard this place from monsters, the scavenger folk called The Scar, traitor factions such as The Dominions and an even greater foe. The lore for this is pretty in-depth and explained mainly through lengthy codex collectibles so forgive me if I glaze over this slightly. You are shoved out into the world of Bastion straight away and get your firsthand experience with this online, RPG, open world, shoot and looter. Anthem gives you the choice to pick one of four javelins each with their own abilities and are defined to 4 classes; Colossus (The tank), Storm (The magic wielder), Interceptor (The up-close melee) and The Ranger (The all-rounder). Each of these are actually quite unique and combat with them was very entertaining. Each javelin is equipped with slots to upgrade, these include 2 guns, a tactical, perks called components (which unlock more slots as you level), your secondary ULT launcher and a passive ability.

The flying of these javelins is one of the most enjoyable mechanics of this game. The flying is uncomplicated and surprisingly dynamic. Launching and landing is something straight out of hero movie and turning and diving through caverns and mountains in the sky is exhilarating game play. However, this is where gameplay begins to take a proverbial nose diving into a fiery ball of trouble. Once the awe of flying finally subsides, what is given to us is a pretty average, grindy as hell game. Nothing very new or innovative. While the combat is a typical shooter, with your special ability spicing it up, the enemies are so docile, its like shooting fish in a barrel. These generic, cookie cutter looking fodder are just so uninteresting to kill and the rare, bad ass foe you may encounter is just that, a rare occurrence. From these enemies you can pick up loot that can only be equipped back at base. Yep, you heard me at the base, oh no, there is definitely no editing your load-out on the fly in this game. Bioware, you’d lose count yourself how much I mumbled under my breath ‘at least let me equip any items I picked up on the mission, please, dear god please..”.

“Strong alone, stronger together” is what a character quotes through a cut-scene, however in this game you kind of sometimes just want to be alone. Every match is a 4-squad team up, and I’m ok with that… only if I have three other friends online. I hated getting match made with randoms every mission I was squad less. I can’t count the number of times I got frustrated when a random would take control of MY MISSION. MY god damn mission. I spent more time coordinating my two other friends from blocking a random out from doing all the objectives than we did discussing attacks. If you are at least going to make us endure the ideocracies of most randoms, try having a mechanic to tag locations that a game like Apex Legends mastered so well, so you can actually coordinate attacks.

This four-man gameplay crosses into all 3 areas of the game. The story missions acquired through interaction with the people of Fort Tarsis, Free-play were you grind world events for collectibles and crafting materials and Strongholds, longer, harder, grindier raid-like challenges. While most missions are the typical, clear out, hold down an area, collect this item garb we are all so used to know and have grown numb too, one mission was particularly exasperating.

After busting your ass already in the story, you are sent on a grindy as hell mission in Free-play. After hours looting, opening god damn chests, all you are rewarded with is a tomb. No enemies, no impressive loot. Frigging nothing. A tomb, with the equipment needed to retrieve to send back to the hub. Free-play is a maddening joke as it is with no way to set markers to navigate or indicators for directions to world events, this just tipped me over the edge. Strongholds were in fact, my personal favorite as they took longer than the typical 5 mins of most of the others and really required team work. Let it be known the most annoying, anger inducing, rage fueling thing wrong this the gameplay is something as simple as load screens. Yes, load screens. And not particularly short ones either, yes long, frigging load screens for everything. I’ll go on record as saying they aren’t as long as the pre-patch, PC players had to endure, but they are just as annoying. Enter the game, load screen. Accept a mission, load screen. Change your load-out, load screen. Enter a new part of a world, load screen. I’ve been in way larger open worlds that didn’t require this. Don’t even get me started on the messy, Inception movie deep menus they designed, that are frankly not user friendly. It seems like someone hasn’t heard the saying less is more.

Despite the obvious, graphical changes to the game compared to its original E3 trailer (comparisons available on YouTube), I find the world of Bastion, exceptionally gorgeous. The graphics are crisp, the water fluid and alive above and below, and the light dances gracefully across the landscapes. Personally, I think even the character animations are great, despite the NPC’s not having the intelligence that the trailer promised. The cut-scenes are also clear and cinematic, almost too powerful even for my Xbox One X. The only time I did have a game breaking glitch was when I was kicked out of an important campaign cut-scene and I missed what happened and instead sent falling through the map. Fortunately, I was able to re-join the game but by then it was too late, and they killed the last enemy and I was kicked into yet another loading screen. The beautiful orchestral music and digeridoo symphonies of the many menus are breathtaking, its just a shame the environmental and enemies’ soundbites were not given this much care. They go from big budget production to barely a budget in an instant. Maybe this would have made the enemies seem not so mundane and mind numbingly dull. I did however enjoy most of the voice acting, and while I find most of the characters unrelatable or very interesting because of their story, their animations and voice acting was pretty charming.

Now while it feels like I am slamming this game, let me make one thing clear, I actually at times really enjoyed it. When I was with my friends it was enjoyable, but sadly any game can be fun with your friends, even more so if it feels broke and incomplete. We made our fun out of the glitches, cheesy dialogue and absurd enemies, which isn’t how a game is supposed to make its legacy. I pray that EA and Bioware have a roll out plan for upgrades, patches and improvements soon as right now Anthem just feels well… half baked. Oh and of course it has micro-transactions. 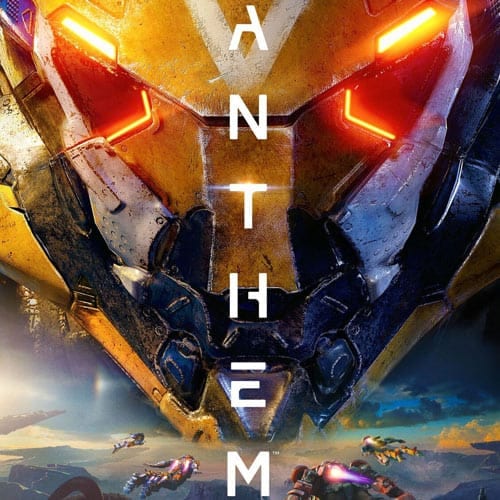