Attack on Titan 2: Final Battle is a nice experience and look into the life of a scout covering the three seasons of the anime. Pacing you through the story as its own designated protagonist, you get to interact and work alongside characters from the anime as if you’re part of the main cast, deepening you into the universe.

The Attack on Titan 2 game is well built around the franchise. It takes inspiration from the three seasons to wrap around the protagonists story as well as the original in the main game mode. It then has another mode that directly plays along the third season and follows the three main characters and their perspective of events from it.

It offers the choice to be a male or female and really basic selection of characters for your identity. The gameplay at the start barely gives you any directional help and expects you to have some idea of the game. Jumping between cut-scene and gameplay didn’t help much either. It’s not until after character creation and the introduction that you get to run through a tutorial/training mode and get a feel for the controls. As a Nintendo Switch game, you can play in either portable or docked modes. Playing Attack on Titan 2: Final Battle in portable/handheld mode is a really big mistake as it’s quite hard to control with not being able to guide your character as easily when compared to playing docked with a controller. Even though the controller had a few downsides, it played a lot better.

The input lag was just stressful as it felt like you weren’t really controlling your character like you would if it were a Spider-man game (to compare the motion of swinging around and movement), you just feel detached from the character.

The controls felt like it took a little more to try and perfect, having to time attacks and movements as it’s more like a combo maneuver then just a straightforward attack. After figuring out the time for attacks however, it got easier to control. The whole thing felt as though It’s straight out of the anime. Keeping up with the atmosphere that the game is giving, not detaching at all from the franchise. The cast in this has no shortage of voices with nearly every character that pops up having a unique voice that is very close to, if not the same cast from the anime series. The visuals are attractive & pleasant. Going from watching the 2D characters in Attack on Titan 2 anime to now, in the 3D space for the game, it is beautifully rendered into this world. I really enjoy the art style from Japanese games such as this as they keep in line with the original anime works.

Overall, I enjoyed this game once I got the hang of the controls. I enjoyed seeing the story from a different perspective when comparing to the original anime. The ability of being able to play along with the main characters was my favorite part to this game, even though you got to play as them as well, just being involved as your own character is really cool. 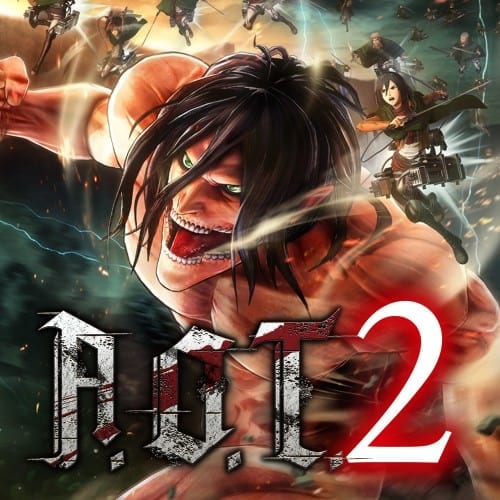 Attack on Titan 2, known in PAL regions as A.O.T. 2, is an action hack and slash video game based on Hajime Isayama's manga series of the same name released for Nintendo Switch, PlayStation 4, PlayStation Vita, Xbox One and Microsoft Windows.