By HadesTheHobo on September 2, 2020 on Reviews, 3 More
close [x]
Tweet
No Comments

Bartlow’s Dread Machine. Is it DREAD-ful? Ha ha ha ha. I crack myself up. The answer to my question is NO. It’s awesome! This antique looking, arcade shooter just oozes steampunk vibes and is as chill as it is challenging. I don’t like handing out 5 star ratings but I’ll be damned if the folks at Beep Games, Inc haven’t absolutely nailed this game.

Let’s start at the beginning, and I don’t mean the game. Take one look at the developers, Beep Games, Inc, and you get the feeling that they just want you to enjoy yourself. Their very philosophy being “We make games we actually like to play”. Their entire mission statement makes me believe that every game they create is going to make me happy, and so far they are one for one.

Bartlow’s Dread Machine is a dual stick, arcade shooter with both a single player and a couch co-op mode. You play as a member of the Secret Service as you find out that Teddy Roosevelt has been kidnapped by a dastardly villain with powers of necromancy! You, and potentially a companion, must wade through the swarms of mechanical zombie minions that this evil doer places in your path, in an attempt to recapture our beloved Commander in Chief.

The classic, arcade style gameplay makes me reel back in time to playing Point Blank on Playstation, and the way the game was dunked in a vat of steampunk gives it a whole new feel. The way the levels roll through in the arcade style is really modernised by watching the maps fold and bend, appear and disappear in some fantastic graphics perfectly suited to the character of this game. I feel like Will Smith in Wild Wild West! 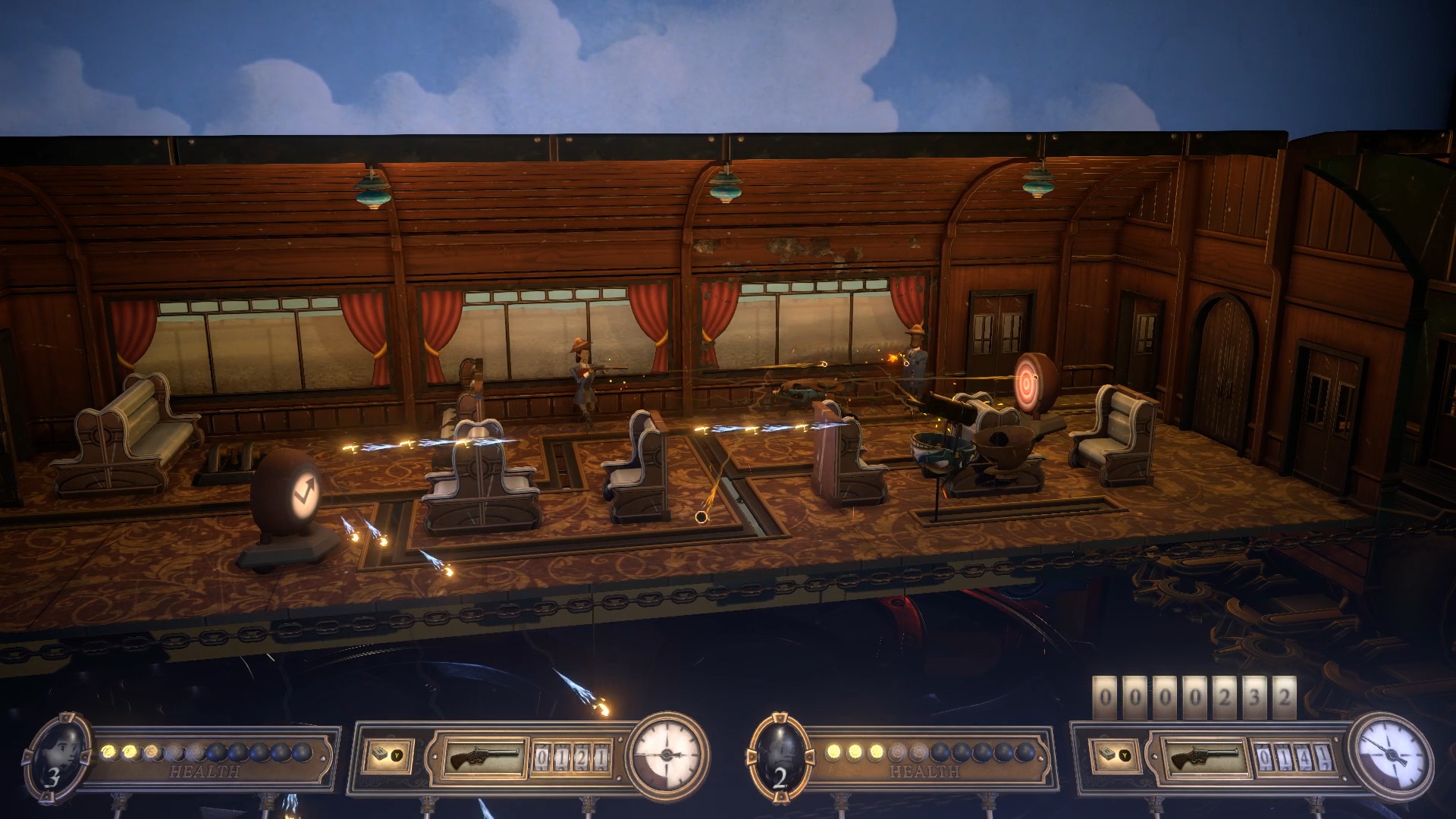 The way the mechanical zombies/creatures explode into parts upon their demise, as well as the way your little mechanical body slowly deteriorates via bullet holes as sparks shooting out demanding repair shows how much care the developers put into making this game. Lets not forget the cogs on the loading screens, machinery everywhere, and the little characters’ acting is worthy of a few Oscars.

Matching the graphics and overall theme to a tee, the music and sound effects are once again on point for the style. The piano based background music sounds almost straight out of a carnival, but it suits the theme. The sound effects just round off how much detail was put in. There’s the sound of cogs every time a new screen loads or the map changes, the shooting effects reminiscent of a carnival game, and there’s even the sound of scraping as the character moves around the map. I finally found a flaw- the music is too loud. Oh goody, they’ve got options even for that!

There’s two key components that go into getting through the levels in Dread Machine; movement and shooting. Your character isn’t just admiring a moving background, it’s little mechanical body is a piece of the map and moves along the pre-defined lines of the map. You will need to maneuver around these specific paths to collect the health and ammo boxes. The shooting aspect is probably the harder part, with no actual “aim” feature, the idea being to aim in the direction of your target and just kind of hope for the best. There’s enough targets to keep you busy that you can’t wait until your bullet lands so you’ll be doubling back on targets and hoping they don’t get to you first. 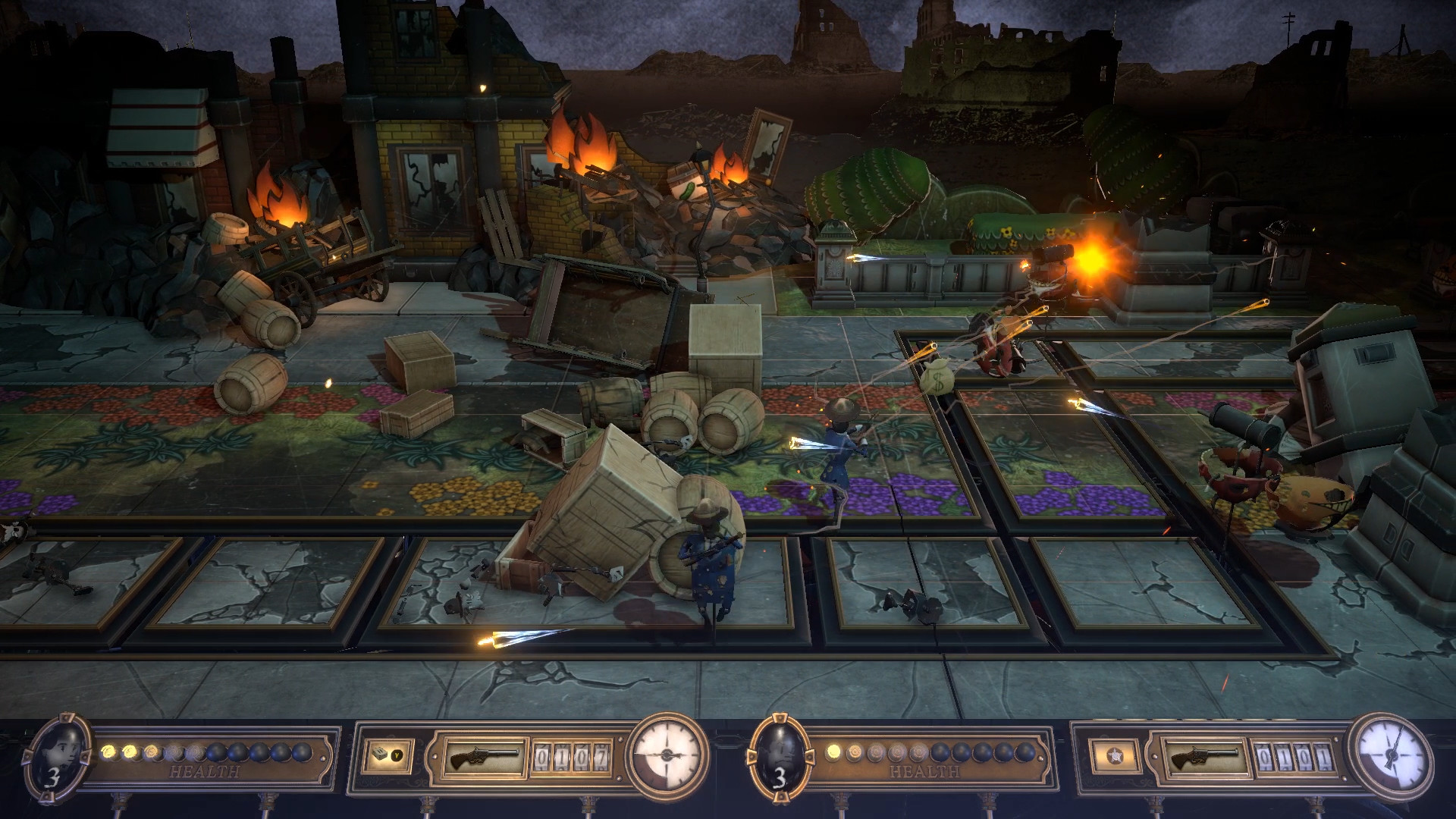 Making this harder are the sudden camera angle changes and multiple appearing enemies. Does this result in a game that’s too difficult to win? Again, my answer is no. Challenging without being ridiculously hard, Dread Machine walks a perfectly balanced line of fun and excitement, giving me a real sense of achievement at the completion of each level.

Also, at the end of each level you get money based on your kills and how many bags of cash you collected- ‘cause, you know, naturally all exploding mechanical devices drop moolah. Was I super excited that I made over $1,000 on level 1? Yes. Was I a little sad when I realised that this game is SO detailed that it’s actually era specific and was only $10.00? Also yes. Another tribute to the effort put into this game, the money you make throughout is in the mere dollars and cents. That’s not quite enough to retire on, not even in 1940, but it is enough to visit the shop before the next round and pick up a new weapon or some clothing. Each piece of clothing gives you different advantages, from reload speed, to health or monetary bonuses. Makes the game a little easier, and makes you just that much snazzier. This game is just so vast and yet so simple.

I can’t wrap this up in any other way than to say that this game achieved its goal perfectly; I really enjoyed Bartlow’s Dread Machine. If the aim of Beep Games, Inc was to make me happy, then they’ve hit the nail on the head. You don’t even need to be a fan of arcade shooters to appreciate the way the whole thing just rolls together to create a perfect machine, and I say perfect because I honestly cannot think of anything they could change to make it better. Steampunk at it’s finest. 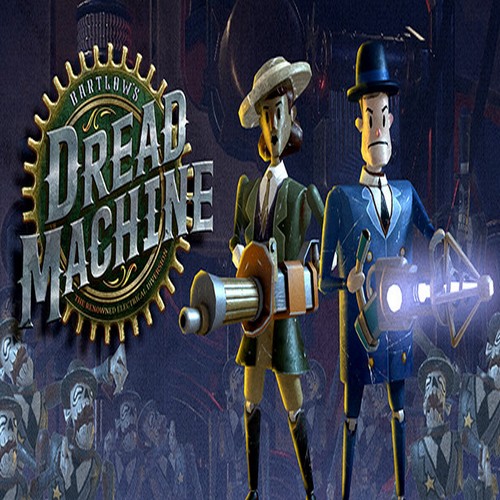 An artifact from the past returns in Bartlow's Dread Machine, a game from the dawn of the Electric Age. Dread Machine is a dual stick arcade shooter with single player and couch co-op modes, six scintillating game worlds and a cast of improbable monsters and characters.