There is a certain something about a come-back story, even when the odds are stacked against them. It has been over two decades since the release of the over-the-top and zany “Ready 2 Rumble Boxing” and much like the ‘Rocky’ universe, the ‘Rumble” franchise has risen from the ashes, once again. Developed and published by Survios, this arcade-inspired boxing beat ’em up, has been reinvigorated under Michael B Jordan’s rendition of ‘Creed’. Packed full of iconic characters and locations from all six ‘Rocky’ movies and both ‘Creed’ films, the only thing missing now is a montage.

For a relatively simple concept of a game, the core elements are heavily weighted on nostalgia from two avid fan bases. It was fitting then that the only way to honour both franchises was to go tongue in cheek and have a bit of fun with it.

Boasting a somewhat limited set of game modes, two to be precise; the arcade mode is your campaign and your versus mode is, well, for versing a friend in good old fashion couch coop. In a rather strange omission, there is no online versus to be found, I guess Survios didn’t lose their grip on the dreams of the past. After all, sometimes we must fight just to keep them alive. 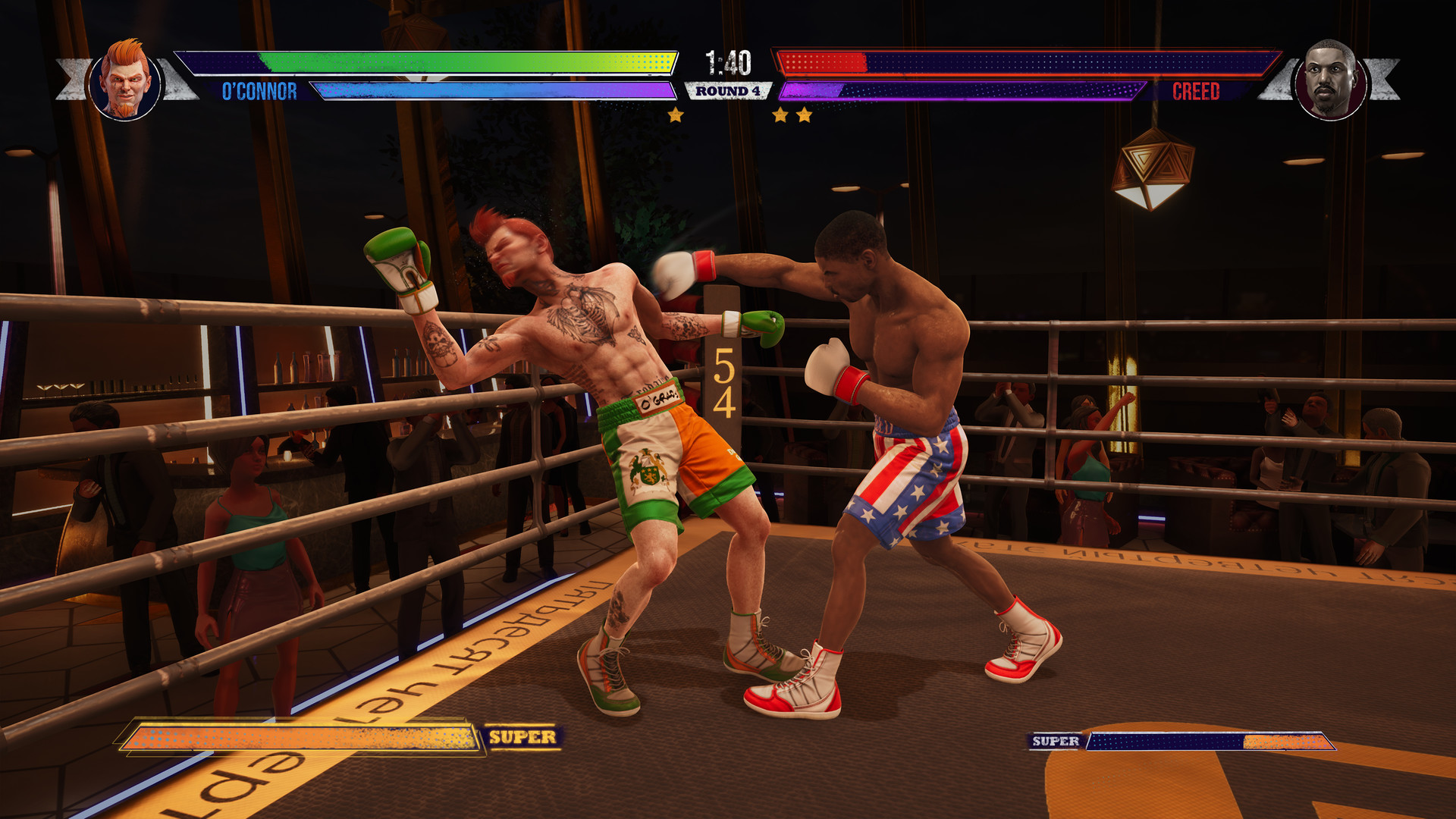 Starting off with 10 fighters with unlock-able characters and arenas, you must rise up to the challenge of your rivals in a battle of attrition with tailored storytelling per character. I started out with the current main man himself, Adonis Creed, which takes place alongside the storyline of the movie, Creed 2. You are invited to a shady tournament for a charity that conveniently runs you through every fighter featured across both films. I’m not sure what I expected but it was a bit of a surprise it played out like a fan-fiction-fuelled visual novel. It wasn’t a series of multiple-choice conversations but more of a scroll of text with two character models on either side of the screen.

They had limited sets of emotions they would cycle through that were the exact same for every character save a few signature poses. I will pay their attention to detail though, with each character having a tailored experience that doesn’t conflict with established cannon from the Rocky-verse. It must have been a fun experience to punch out in the writers’ room. I debated with myself over whether or not some voice acting would have made the exposition moments a little bit more impactful or maybe even a few cutscenes. Ultimately, I believe they leaned towards streamlining the experience to keep the momentum going and get you into the next fight.

I think we can all admit we get a bit of guilty pleasure with the dramatic yet grounded fights in the movies through the years. So it was fitting the playstyle is catered towards a more exaggerated arcade experience while still being somewhat grounded. Combo moves will be familiar with button-mashing fighters, light taps on one button throws out some jabs that can interrupt someone charging a haymaker by holding the other face buttons. Chaining combos is as easy as tapping the X button three times and then hold down and X at the same time. 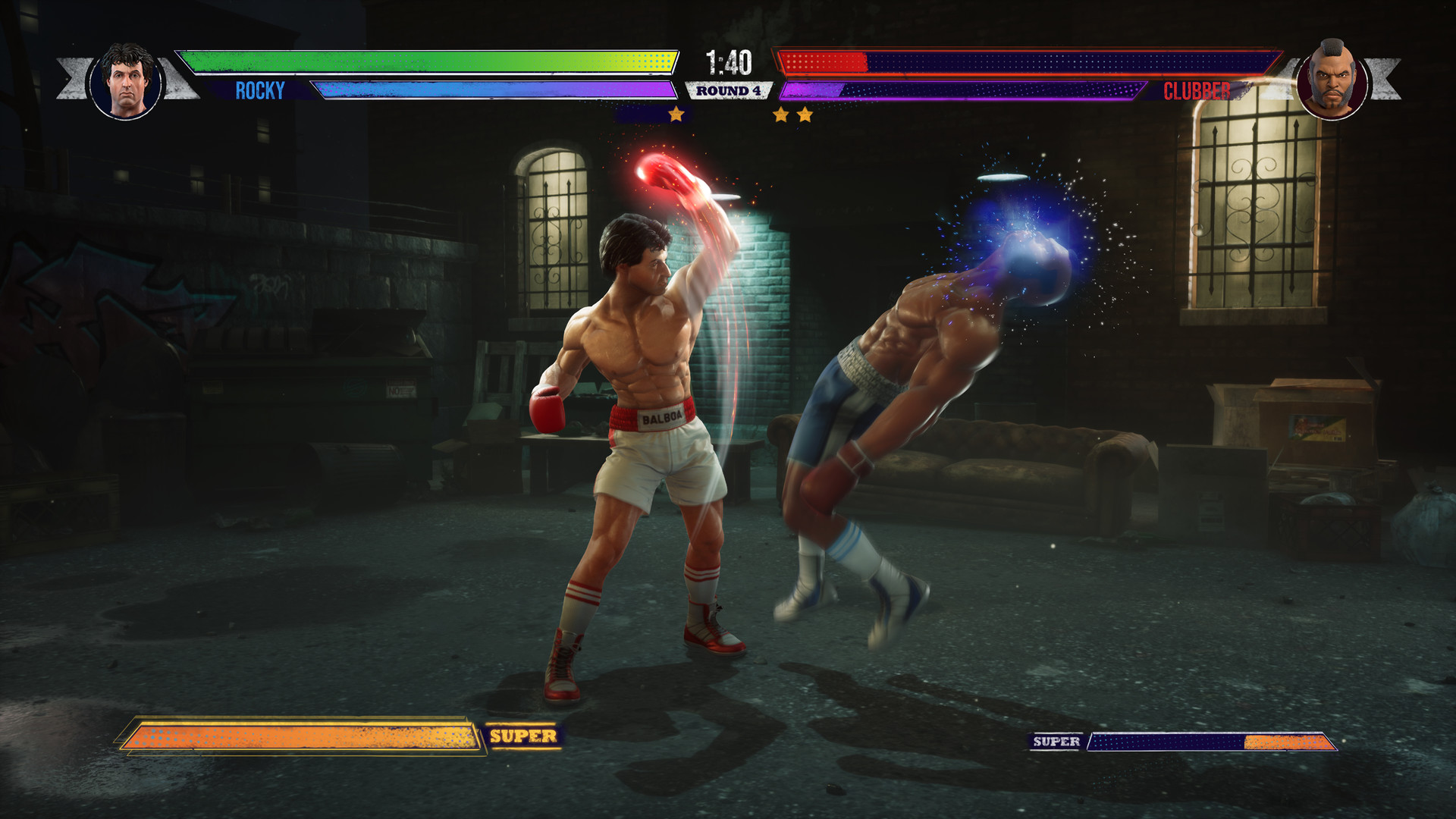 Holding down Y can throw some uppercuts and timing the dodge button perfectly upon impact can trigger a deadly counter-attack. Big hits are highlighted by glowing animations and dodges leaves speed line silhouettes on the screen in a cartoonish manner. Land enough punches in a row you can break their guard leaving them dazed and open for a big hit and build up your super bar enough to launch a scripted power punch that takes off a staggering amount of health. Each fight gives you a maximum of four health bars that refill each time you are knocked down and button mash your way to your feet. Using the health system can result in funny moments when you run out of health from a tiny jab that will send a player careening to the mat as if he was hit by a truck.

Every character was given the cartoonish treatment as well, as each boxer was given an inflated physique that was still incredibly complementary. Taking Rocky for example, he has always been in fighting condition during his fights but he was meticulously sculpted which, in a way, emphasised how this game was made by some fans looking for some fun. A couple of times I gave a hearty smile as the absolute best part of the game played out when I was thrown into a montage mini-game between fights while friggin ‘Eye Of The Tiger’ played in the background! The mini-games had almost absolutely nothing to do with how to fight, however, it gave me a mental workout and had my trigger fingers on edge which I could bring into my next fight.

If you are looking for an easy game to throw on at a party that will catch the eye of on lookers, then Big Rumble Boxing can fill that void as you change your passion for glory. Having the pumping montage music of the ’70s and ’80s playing through each fight was always an excuse to up the volume to help give you the thrill of the fight. And yes, it’s true, I have been playing Eye Of The Tiger every morning since I started playing this game but I went the distance with my puns and now I’m not going to stop! 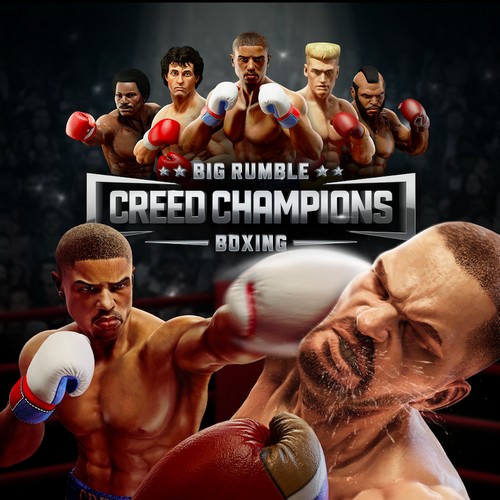 Do you have what it takes to be a champion? Train, fight, and win like Adonis Creed, Rocky Balboa, and more boxing legends in this knockout boxing game!