Black Future ’88 is a 2D platform, retro, sci-fi, rogue-like shooter published by Good Shepherd Entertainment and developed by SuperScarySnakes, who animatedly describes the game’s style as “Synth-Punk”. This simple, yet very challenging game brings a lot of high intensity action similar to Contra and Dead Cells, but set in dystopian future and presented in a retro, futuristic style likely influenced by the hit 1982 movie, Blade Runner.

Just as the title implies, the game’s story is set in the year 1988. However, due to all the chaos in the world, everyone has stopped counting the years since 1988 and the actual year is unknown, but sometime in the distant future. The main goal of the game is to ascend Skymelt Tower, encountering various homicidal AI, traps and Colossal Wardens in an attempt to reach Duncan, the District Warden. Duncan is the madman responsible for the nuclear cataclysm that is on the verge of destroying the world. Players will have a choice two characters from the beginning, with an additional three to be unlocked. Only having a total of 18 minutes to complete their mission or their heart will explode, the race is on, meaning the heroes are literal ticking time bombs, but also humanity’s last hope.

The game begins with a helpful tutorial explaining the basics and more will come later as players progress further. The 18-minute time limit does mean it’s a short game, but the game offers a lot of replay-ability with its difficult and challenging gameplay and randomly generated levels. Even after dying in game, each playthrough will start from the same location, but everything beyond that will be procedurally generated each time, giving it a fresh feel. The bosses are also never in the same order, with each of them varying in difficulty and requiring different strategies to defeat. This can make it difficult to plan ahead without knowing which boss is next, but is part of the fun and will keep players on their toes. 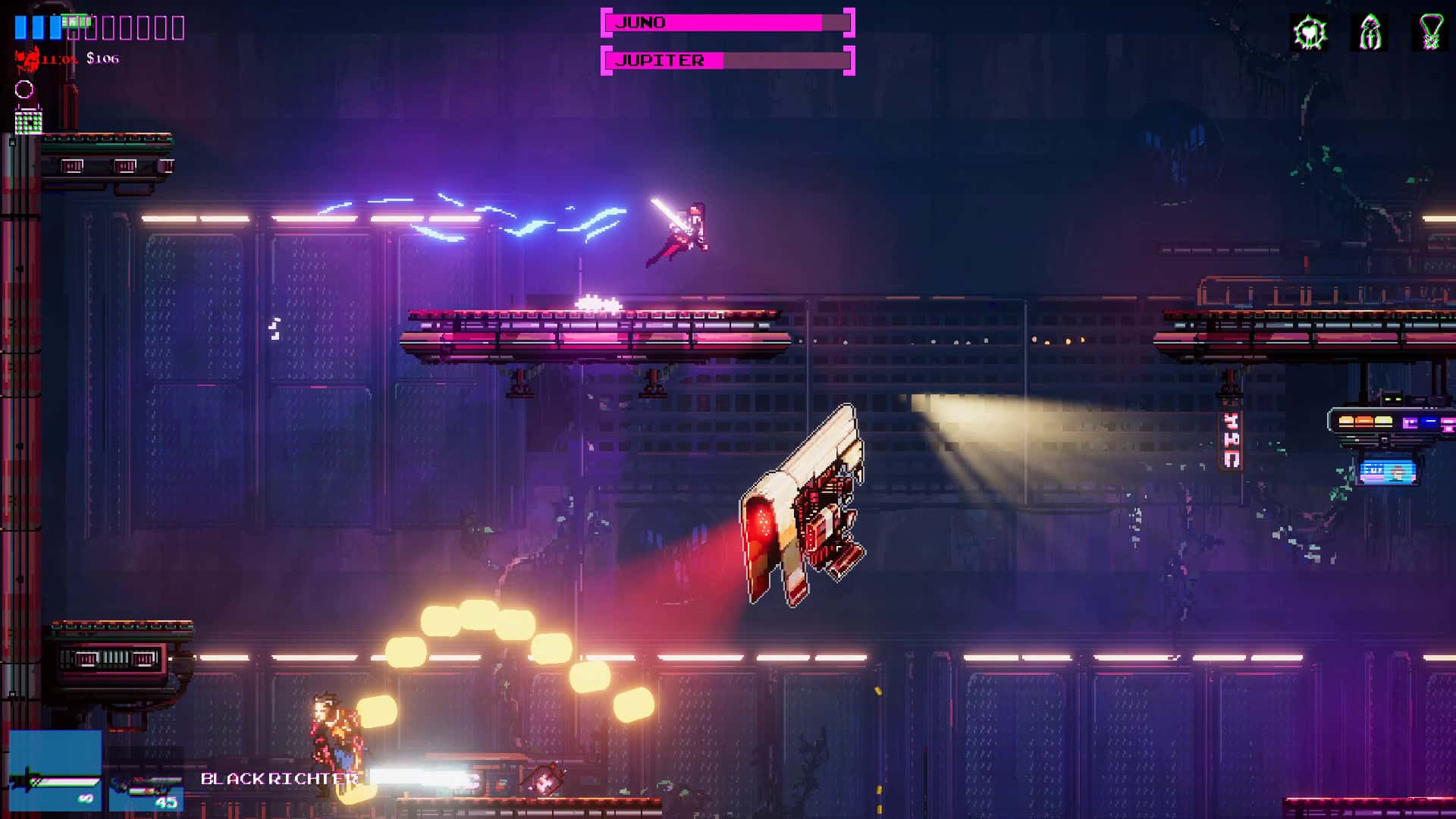 The enemies players will encounter are a variety of mercenaries, cyborgs and other killing machines, all with the intent of taking out any who oppose the District Warden. Some rooms may only have a few enemies and others will have many more, with a lot of the screen being covered in enemy fire. Players will come equipped with two weapons at the beginning. Each character will have their own two default weapons, but can acquire different weapons dropped by some enemies after defeating them. However, players can only carry two weapons at a time, easily switching between them at the press of a button.

There about 50 weapons in the game, each with their own advantages and disadvantages especially when battling the bosses. The vast majority of the weapons are guns, such as machine guns, which are good for taking out hordes of enemies, shotguns which are short range but higher damage, laser rifles for long distance shots, with so much more to discover and experiment with for a desired effect. Some melee weapons are also available like a plasma type sword, which is very short ranged but high in damage and can even cut through enemy fire, making it a good offensive and defensive weapon at the same time. The heroes also have a special dash ability that allows them to instantly zip ahead a few metres and dodge enemy fire, which is essential when fighting a large number of enemies. With guns being shot all over the place, it can become a little frustrating to keep track of where you are on the screen amongst all the chaos, but doesn’t seem to affect the fun factor.

Each of the bosses are incredibly unique and challenging. Part of the fun is not knowing at first how to approach them and having to figure out how to attack them while under intense pressure. Sometimes you will battle a single boss, a team of two bosses or one boss with a never-ending horde of enemies, but won’t end until you take out the actual boss in that room. The level of difficulty varies with each boss. Some will overwhelm you with a flurry of bullets, lasers and explosives and others are more melee based, but not to be taken lightly at all, as they may instantly kill the hero with just one move. 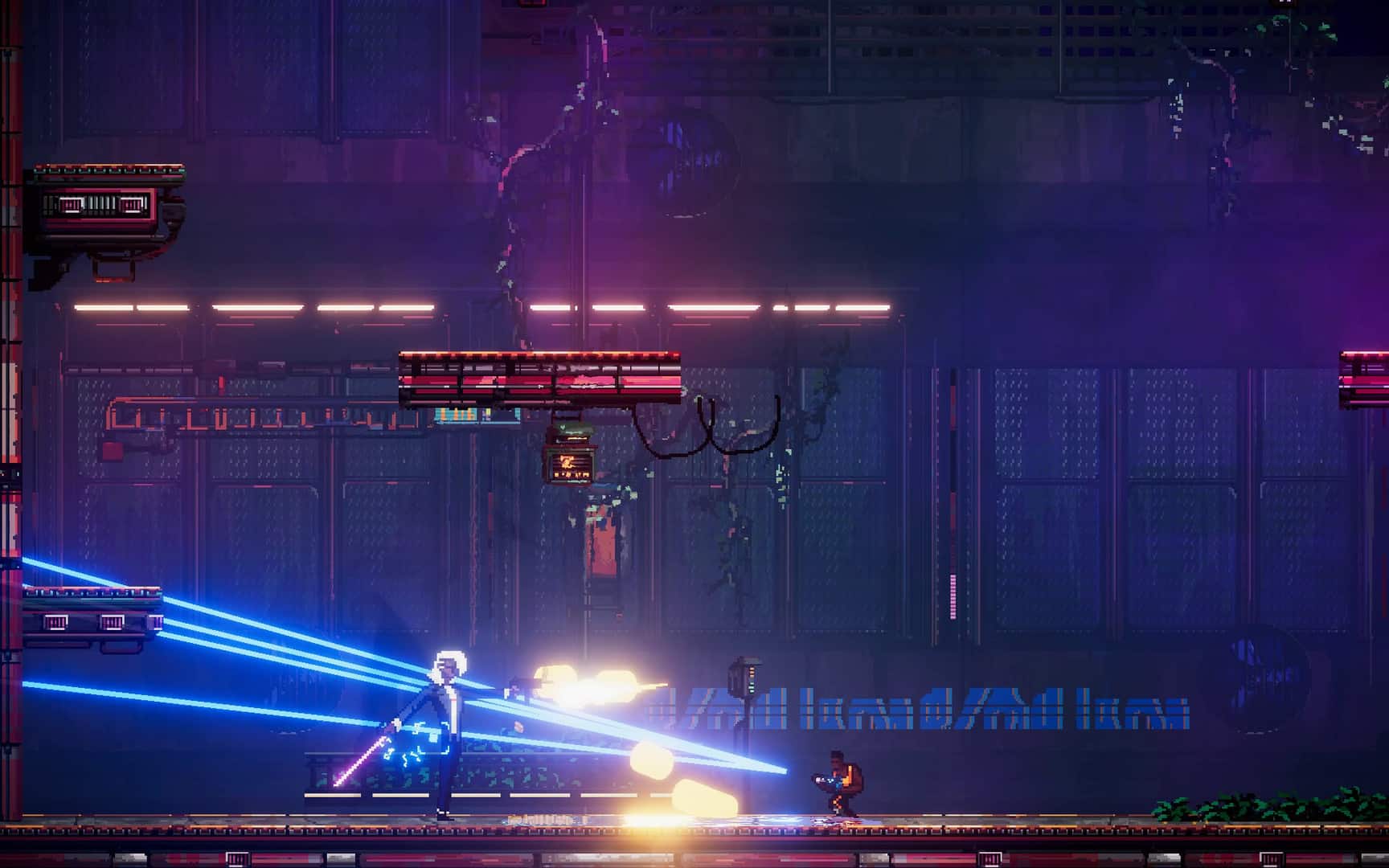 Various upgrades will be available in certain rooms that will enhance the heroes’ abilities, but some will come at a cost such as giving up some health or even time which of course reduces your precious 18 minutes. While traversing through the tower, a skull icon will point out which room will progress the game. But, exploring the other rooms can lead to better weapons and upgrades needed for the challenges ahead or lead just the hero to more enemies out for blood, it’s a fine line to risk it all. This of course will also eat up the little time you have. All of this and more gives the game a real risk/reward dilemma.

The overall presentation of the game has a real 1980’s sci-fi movie vibe to it, especially with all the neon lights amongst the piles of rubble in the backgrounds. The gorgeous and detailed 8-bit retro style graphics paint the picture of a grim and dark future in ruins and the feeling of humanity losing all hope. The 80‘s inspired, techno music definitely adds to the game’s aesthetics and is even enjoyable to listen to on its own. The District Warden, Duncan, will on occasions preach about the inevitable demise of the world, giving the haunting feeling that there is no way to change the outcome. These speeches can occur any time in the game and take you by surprise each time. It’s unclear whether he’s speaking through loud speakers from Skymelt Tower or is like a narrator speaking in game, but either way it gives him a lot of character reminding everyone that he is control and a real threat to be taken seriously. His deep voice can be difficult to hear for certain players, but likely done that way to keep with the game’s 8-bit retro theme. Subtitles are available for those really interested in what he has to say, but the large text box at the bottom of the screen can obscure view of the action happening in that area, leaving players open to enemy attacks.

The 18-minute play sessions might sound like the game is lacking a lot of content, but the randomly generated levels, constant different order of bosses and variety of weapons coupled with intense action-packed gameplay really gives this homage to classic 8-bit platform games a lot of replay-ability, with a different experience in each playthrough. Black Future ’88 is a must try for anyone looking for a unique game that is incredibly challenging, high pressure and above all just plain fun, without really knowing what’s coming next.