When a game keeps reminding you to stick together and work as a team, you down right listen because chances are you will get your ass handed to you over and over again. Not talking from any experience or anything, but sometimes relying on others to make smart choices in games are hard but very necessary for the great dub at the end. ‘Bleeding Edge’ developed by Ninja Theory, is an online multiplayer, team based, combat game much like ‘Overwatch’ or the late ‘Battleborn’, that seriously required me to pull my head in and work as a team.

Opening up in a neon-acid, cyberpunk world, where changing your appearance is normal, illegal human augmentation systems allow genetic enhancement to run rampant. With crime on the rise, what better way to deal with criminals than throwing them into an arena and putting them up against each other in a 4 v 4, fight club. With a superstar cast of very likeable misfits to “team up and cause chaos, the throw down becomes a fight to see who will come out on top as the true victors of cool.

The game opens up with a very comprehensive tutorial, and holds your hand through a series of lessons on the core and advanced mechanics which can be practiced in the Training Ground. Just like games similar to this genre you battle with a basic attack and specials with cooldowns, each very satisfying when you land that final blow. The usual evade (essentially a dodge which uses your stamina) and parry mechanics are there, along with a hoverboard to travel. I felt this inclusion was pointless as it wasnt much quicker than running from area to area. 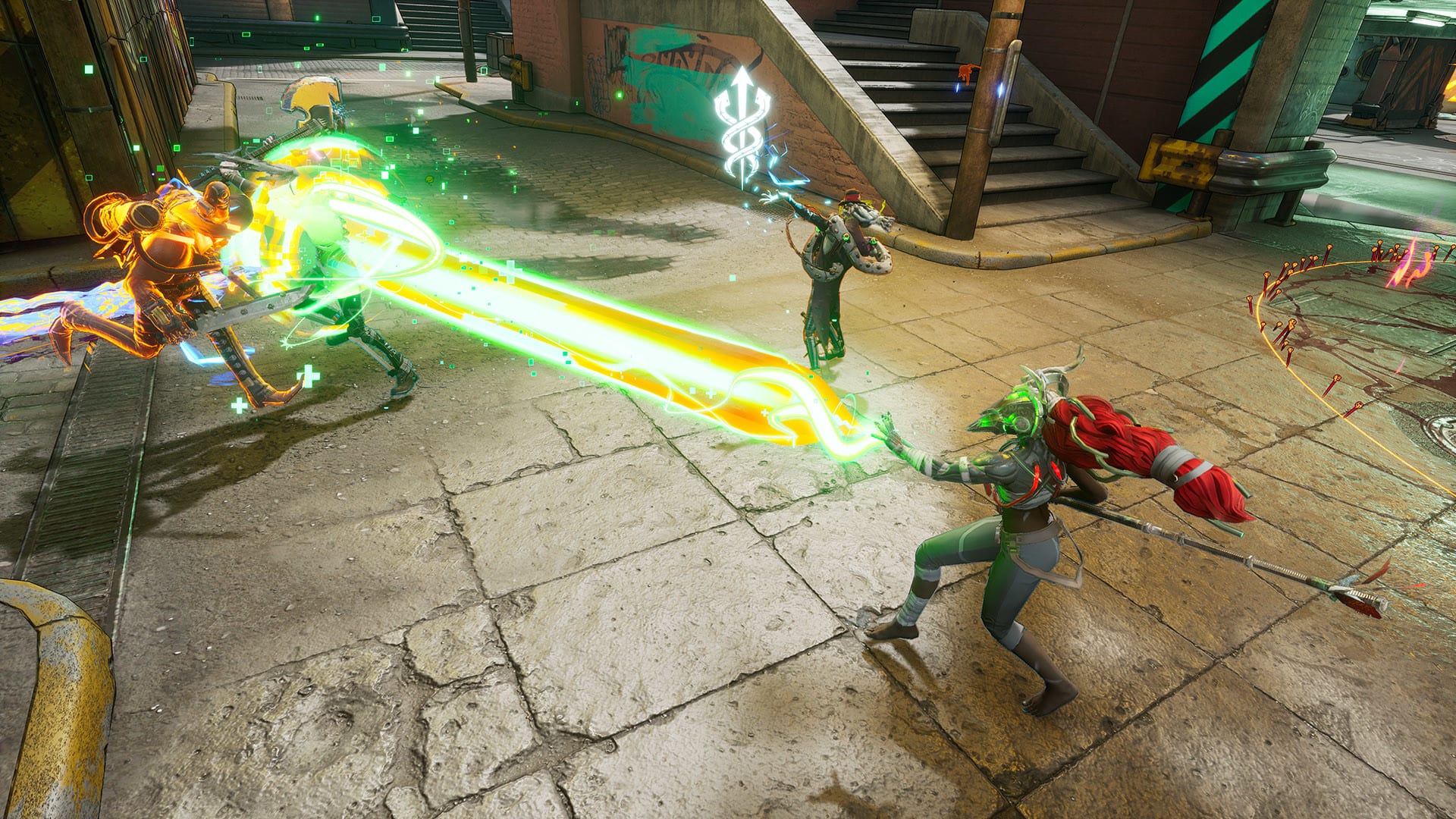 The 11, energetic characters come in 3 classes; the nurturing and supportive Healers, the agile Damage dealers and the enduring, hefty Tanks; each with their own unique abilities characterised to their design and appearance. Once you load into a game, you need to pick which of these three classes is needed most in your team of four, as you close quarter battle another group across two different modes. These modes are the stock standard ‘Capture the Point’ and ‘Power Collection’, a sort of money in the bank, which utilised collecting power cells and depositing them at a checkpoint.

While the game is only fresh, it was really disappointing to see they haven’t been very innovative with the modes, just dull rehashes of generic modes found in almost any combat game. While they haven’t really re-invented the wheel, they have thankfully included the typical health top up stations and boosters throughout the map such as damage increases.

Back in the main menu, just as you’d expect to find in this type of game, you’ll find customisation. In the aptly named ‘Workshop’, you can change the appearance of a character with skins, emotes, boards, read their bios and even mod your characters abilities gained from in-game leveling. It was also a nice inclusion of a ‘Watch Zone’ , where you can watch previous matches in the community, always a plus to hone those strats and plays. The game does have a credit system at the moment but I have no doubt a store with loot boxes is in the not so short future; of course it’s 2020.

Visually, the game is gorgeous with its combination of cartoonish, mildly cel shaded graphics. In a very ‘Borderlands’ style, they are whimsical and bad ass all in one sentence. The characters are all so detailed and full of charming things that make them stand out; whether it be Gizmo (my redhead, tank girl-like Australian) with her mini guns, hardhat and fishnets or Daemon with his graffiti can ammo belt and gasmask oni face; there is definitely a devil in the detail. 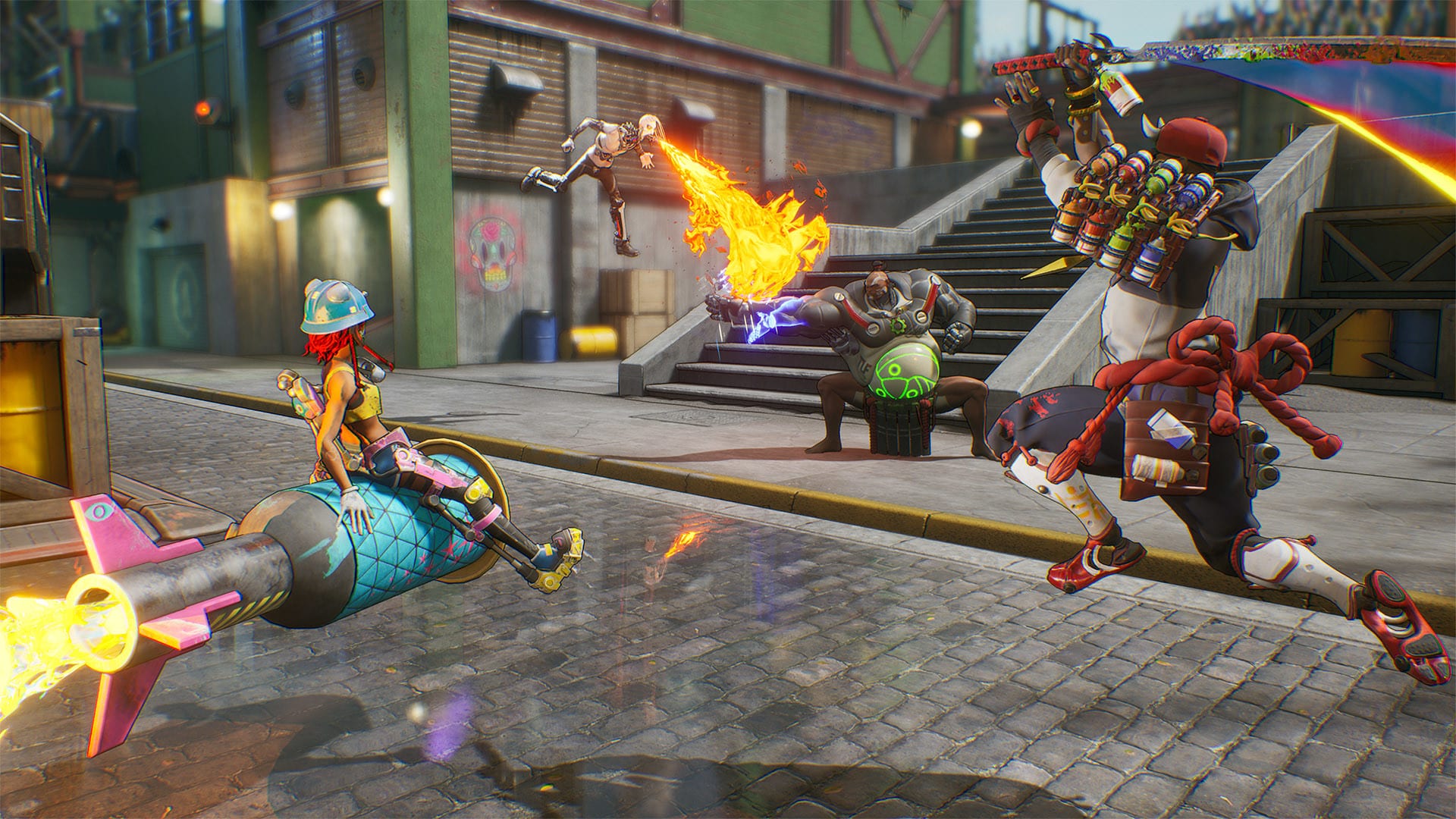 Unfortunately, the arenas dont have the same love and attention. They really are uninteresting and to be honest quite a let down. They are very bland, quite unimaginative and after a few rounds are very disengaging to even explore. There are a few scattered environmental hazards such as a train crossing through, but even that is easily avoided and possible to go round. It just needs something to keep you on your toes.

One highlight though to counteract this, is the fact the music keeps you awake even if the maps put you to sleep. The music is electric and buzzing with attitude. Whether it be sitting in the menu or traversing the field of combat, the energy is high as you clash with opponents.

I found it interesting that matching making was pretty decent, with my game loading in in less than 2 minutes every time. Being on Oceanic servers however was quite jarring at times, with my character skating around the map. That isn’t really a game problem, we all know what Australian internet is like, especially in this time where everyone is trying to use it.

Overall, people will either love or hate this combat game. It is a pleasant step away from Overwatch with its quirky, cyberpunk characters and fun gameplay but at the end of the day it doesn’t have the polished mechanics and charm of such a big title. 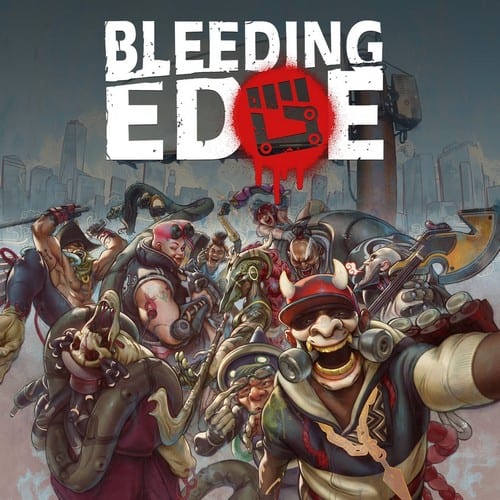 Grab your team and tear it up in Bleeding Edge, an electrifying online brawler where every fighter comes mechanically enhanced for mayhem!