By Mathew Lindner on June 7, 2019 on Reviews, 3 More
Tweet
No Comments

I remember as a kid, running around the back yard pretending to be a soldier, or a police officer, carrying a stick or a big block of LEGO because I didn’t have toy guys. (My pocket money was spent on video games for the most part) I’d run around for hours making “pew pew” noises while killing imaginary bad guys, ducking behind cover to avoid the incoming fire. Needless to say, I was a bad ass. I never once got shot, and all the bad guys died.

Now that Virtual Reality is a readily available thing, I can do this in my lounge room as a fully grown adult!

My first VR experience was with the Samsung Gear VR, which to be honest was incredibly disappointing. Even with the remote all you did was look at something and click a button. Or at least this was the case with the Suicide Squad game. But now that I have borrowed Subzero2K’s PSVR kit, things have opened right up! Enter Blood & Truth by Sony Interactive Entertainment, a first person action game that has you playing as British Elite Special Forces Soldier Ryan Marks. Sounds honorable right? The majority of the game takes place with you cruising around the dark underbelly of London as you protect your family and their investments from a criminal organisation looking to take over the family business after the untimely death of your father. Using your military training and a list of weapons no normal family would have, your mother, sister and brother work out a way to take down these criminals without starting a vicious gang-war on the streets of London.

Initially I was quite impressed with the game, the graphics and lighting are spectacular while the sound effects move nicely as you admire your surroundings. Buildings are beautifully rendered and the general scenery almost looks as if it’s pulled from a photograph, while weapon models are detailed to the highest level. Unfortunately, generic enemies are a little on the blocky side, looking like more detailed characters from the likes of Time Crisis. As I looked around internal areas, I also couldn’t help but notice that some of the more circular objects weren’t as rounded as other games released recently. I can forgive this though, as the vast majority of the game really is spectacular to look at, and let’s face it, we’re playing with somewhat new technology here. As I mentioned before, the sound moves with you as you turn your head, with voices and sound effects changing as you look in various directions. Just like any good action film, the background music has your heart pumping and excitement building as you play through the various levels, backed with effects that have you feeling like you’re really there. There were a number of times I just stopped mid game to simply enjoy the satisfying crack as I fired my pistol, or the times I would lob a grenade into an empty room just to experience that incredible explosion just one more time. Couple this with an incredible cast of voice actors who deliver the story with such passion and you have a game that could very easily make it on the Hollywood big screen!

My only gripe with the game is the controls. When I first started playing, I was using a standard PS4 controller. This didn’t seem to be an issue until I actually had to use my characters hands. I don’t know if it was a glitch or something hadn’t synced correctly, but my hands were out away from my body and turned at an almost ninety degree angle from my character. This made shooting incredibly difficult as I had to hold the controller in a way that was uncomfortable and ultimately useless. Not only that, I couldn’t open the first damn door that I came across. Yes, there are ways to re-calibrate your headset, as with any VR game, but Blood & Truth didn’t seem to give me a way to reset the position of the controller and I very quickly grew frustrated – especially since this review was already overdue. So a quick trip back to the bosses place and I had a couple of move controllers ready to go. The game is so much better when using these. Yes, there was the occasional glitch where my hands would move to strange locations, but holding these at my side and resetting the headset position would more often than not fix this. Having said that, looking down sights on a rifle or aiming the pistol was not as easy as I anticipated, and certainly nowhere near as real as I would have expected, quite often relying on tracers to figure out where my shots were landing and adjusting accordingly. I also found on occasion, if I moved the controllers to close to each other, the camera seemed to mix them up and would send the gun wildly out of control, requiring a re-calibration once more to try and resolve the issue.

But ignoring the nausea inducing contraption that is a Virtual Reality headset, the game overall is very enjoyable. As a grown adult I could comfortable duck and weave in the warmth of my lounge room, killing imaginary enemies once again. Only this time I died. A lot. A game that has a very compelling story line, incredible sounds and graphics that for the most part are absolutely stunning, the game is let down by a slightly buggy piece of kit. Perhaps over time I could get used to where things needed to be positioned to play more comfortably, but this wasn’t a luxury I had in the line of work. You’ll need a fairly open space to get the full effect of the game, and unless you have a room dedicated to a VR system, I think you’ll quickly grow tired of re-positioning everything whenever you want to play. 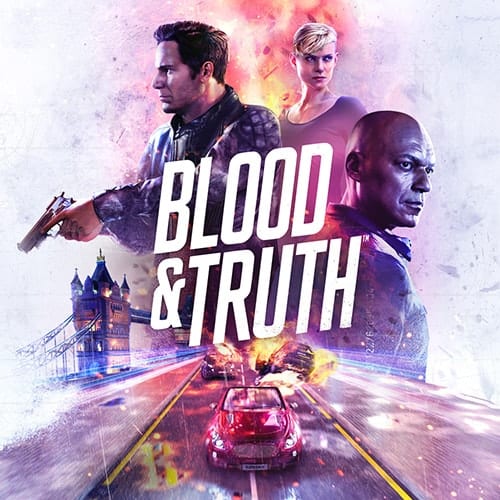 Blood & Truth is an first-person shooter developed by SIE London Studio and published by Sony Interactive Entertainment. It is set to be released in May 2019 for the PlayStation 4's virtual reality headset PlayStation VR.