Bloodstained: Ritual Of The Night

Side scrollers and platformers; a few games I have never been any good at. If you had a chance to drop in on me streaming Megaman 11, you’d see how often I failed a simple time jump – Just ask the Bossman. I’m more of an open world, RPG fan, thoroughly enjoying the likes of Fallout (not 76) and Skyrim. I enjoy character building, looting, exploring skill trees and the likes. It’s probably why I was so hooked on World of Warcraft for so long. Who would have thought that a side-scrolling, platforming, action RPG would capture my interest? But capture it, it has.

‘Bloodstained: Ritual of The Night’, developed by ArtPlay and published by 505 Games, falls into the Metroidvania sub-genre of video games. Bloodstained: Ritual of the Night expertly combines elements from role-playing games, platformers, side scrolling and fighting games to create a truly magnificent playing style. The bulk of the game is spent running and jumping in a similar fashion to the old Mario games, while you slap your enemies around with a basic attack. As you progress, you’ll unlock magic abilities giving you some ranged damage, and finally, you’ll be able to unlock moves that use a control style very reminiscent of Mortal Kombat. Playing as Miriam, one of only two Shard binders, to survive a ritual sacrifice that was meant to prevent the world from being devoured by demons, you’ll work your way through beautifully illustrated levels slaughtering scores of demonic enemies. As you defeat certain enemies, Miriam will absorb shards, unlocking new and more powerful abilities for you to use against them. Dotted around the play area you’ll also find chests, containing valuable loot for you to use; whether it be more powerful weapons, or simply a new scarf, every item will have some kind of effect on your character stats, allowing you to tailor Miriam to your own play style.

The levels are quite simple in design but the artistic style gives a sense of time, being based in the 19th century, England. Ranging from exploring a sailing boat to a suitably grim Gothic Castle, there is plenty of incredible art to take in as you scour every nook and cranny, seeking out hidden treasures.

Characters look pretty much like any other anime-esque game, with females having over proportioned jiggly bits, but otherwise are highly detailed, two dimensional models. As you gather new gear, you’ll find Miriam’s appearance will change slightly, but overall she maintains the same style of outfit for the most part.

One thing that surprised me a little was the fact that the game contains some decent voice acting. In my experience, many games of this nature feature walls of text, and while this is present in Bloodstained, the fact that voice acting even exists was a refreshing change from what I am used to.

Musically, the game features quite a romantic soundtrack, further emphasizing the era the game is based. While it was quite repetitive, the level at which the music plays lead to an overall pleasant experience.

I have to say that overall, I actually really enjoyed the game. Sure, there were some frustrations when I died and had to continue from the last time I saved, but overall the compelling story-line, the simple controls and being able to play how I wanted to was encouraging me to play more. I also later found out that the game has a possible three ending, which has me wanting more.

Bloodstained: Ritual of the Night is a beautiful mash up of side-scrolling platformer, role playing and tournament style combat. If you’re after something a little different, something you can play a bit more casually, then this is certainly one to look into.

Bloodstained: Ritual Of The Night 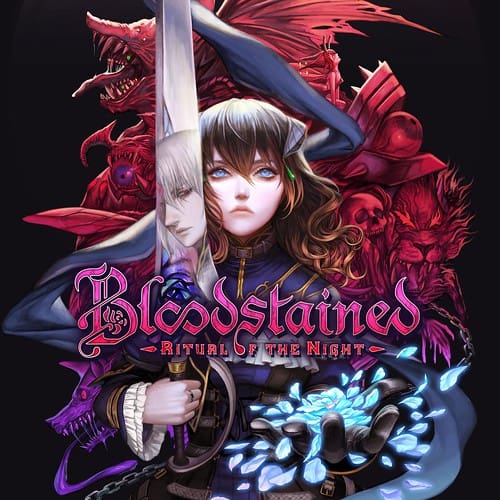 Bloodstained: Ritual of the Night is an exploration-focused, side-scroller action RPG by Koji Igarashi. Play as Miriam, an orphan scarred by an alchemist's curse that slowly crystallizes her body. Battle through a demon-infested castle and defeat its master to save yourself, and all of humanity!