The game has you playing around as a blue spaceship riding and guiding yourself through levels that are littered with enemies of the robotic kind. There are a significant number of different enemy types throughout the game all with their own little quirks and powers.

Upon spending some quality time with it, it become immediately obvious to me that this was a hidden gem with so much potential for hours of addictive fun, the kind of experience which causes time to melt in between the hypnotic sounds of pew-pew bullets and thundering explosions as your enemies quickly become fine-sized shrapnel before your very eyes.

The sense of immersion within the game was breathtaking since it felt like you are inside an actual place brimming with dense vegetation, bodies of water, and charming old-world enigmas like stone pyramids and pillars. This creative artwork style is stellar and impressive, soon capturing your imagination with ease. It all tied seamlessly together in bringing the player palpable sense that you are inside of some strange land awaiting for you to explore and discover its many foreboding secrets while fighting off an endless array of distinctive enemies and even monster sized bosses found waiting at the end of each stage. This then quickly brings me to another positive attribute, it showcases nine full sized stages and undoubtedly feels like a full game. One with which you can sit back for several hours and enjoy to the fullest. Because you must complete each one first before advancing to the next, and you only have one single life and health meter to do so, making sure to steer clear of the enemy firepower is crucial for success. That involves continuous deft movement of your ship which also has a dynamic sprint ability to increase your speed.

I will say however, that I kind of wish that the sprint speed was simply the default speed for the entire duration of the game since you pretty much need this kind of continuous agility in order to make quick movements at any given moment. But nonetheless, the current setup more than suffices.

Your firepower consists of both primary (bullets) and secondary weapons (missiles) which can be swapped in-game with captured power-ups from destroyed enemies. It’s your basic straight-forward system here, nothing fancy or overly complicated, and pretty much just what you’d expect from such a game with very minimalist controls. This all makes it to be very accessible for both casual and hardcore gamers alike. Now onto the actual gameplay. I felt that it was overall quite solid because it’s imperative that you continue to strategically move about in most sections where enemies are present, since their bullets keep aiming in your general direction. This certainly makes for edgy and tense encounters when several of them are simultaneously gunning for you. I found it to be a thrill in methodically clearing the screen of their presence, picking them off one by one until the threat gradually subsided.

Additionally, they each have their own individual health meters to display how much more damage they require for complete obliteration, which was quite a nice touch I thought. I will mention here as well that your bullets do curve as you rotate the ship/screen which adds to the aiming challenge somewhat. There were two facets of this title which I found to be lacking in the switch and PC versions. For PC there was the very unsatisfying number of configuration options, which consisted of only resolution, graphics quality and mouse sensitivity). Having the ability to remap controls, change difficulty settings, as well as an option to disable controller support completely would have much improved the game playbility. For the switch version there were numerous graphical glitches that constantly blocked the visibility of a few tiny bombs or enemy bullets. If not for these issues, I would certainly rate this as being a nearly perfect twin-stick shooter in a heartbeat. It is my hope that more such configuration options and major bug fixes will be addressed by the developers in a future update.

Blue Rider requires skill, persistence and a lot of concentration in order to defeat each stage but the effort is well and truly worth it. In conclusion, Blue Rider is a fun jaunt down memory lane for those who remember these types of games from their childhood or for those wishing to experience it for the first time. The beautiful nature of the game will draw you in and keep you playing all the way to the end. 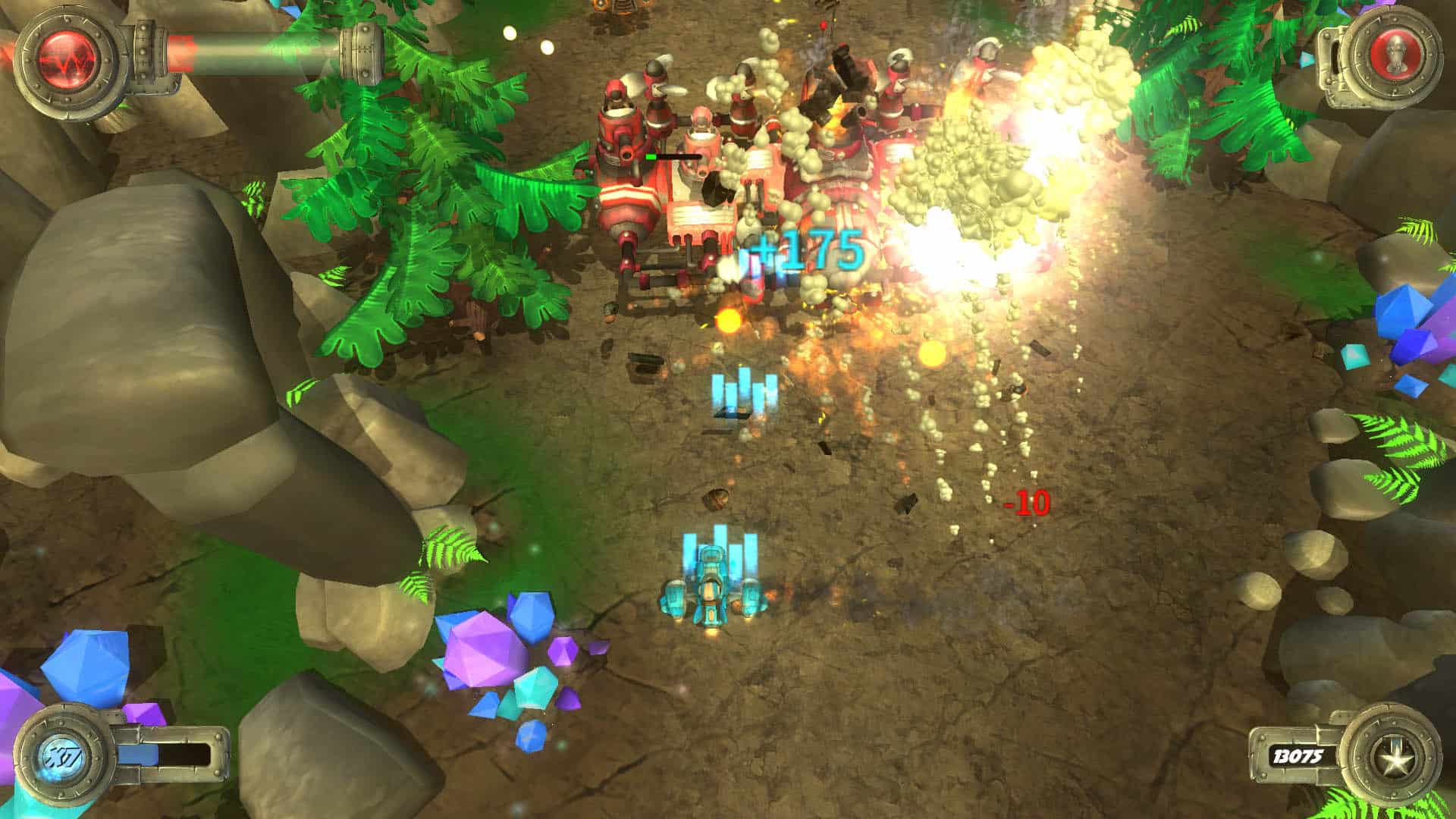 In a valley flooded with bullets, your next challenge rises from a heap of scraps. This time there aren't blue hedgehogs or mega men to save you. Hop in and become the Blue Rider.