The year is 1999, a mere 5 years since the release of Sony’s PlayStation. We’ve currently spent half a decade with family friend like characters such as a dragon named Spyro, a strange slave escapee on Oddworld called Abe, a British tomb raider named Lara Croft and a cooky, orange colored, Australian bandicoot called Crash Bandicoot.

Suddenly, a new family fun, racing game emerged on the market. A game that took the concept of Nintendo’s Mario Kart & Diddy Kong Racing and brought it into the then ‘modern time of gaming’.

That game was the original Crash Team Racing, a go-kart racing game featuring the characters, worlds and items from the famed trilogy (at-that-stage) Crash Bandicoot.

Now, 20 years, Beenox development (the team who had just remastered the first Call of Duty: Modern Warfare) was put in charge of rebuilding and releasing a well needed (and heavily requested from fans worldwide) version of Crash Team Racing. So, after two decades of patiently waiting, we’re finally presented with the fantastic Crash Team Racing: Nitro Fueled. STORY
Much like the original Crash Team Racing, the characters (both good and evil) of the Crash Bandicoot universe are invaded by an alien called Nitros Oxide. With his ship looming over Earth, Oxide challenges the Bandicoot gang to a series of races and challenges, with an eventual race between Oxide and the reigning racing champion.

With this remake, there are two modes to choose from before setting out on your speedy adventure:

Depending on your choice of mode, your task is to then choose a character (and / or cart, any decals and stickers you want to dress up your kart with) and hit the tracks! You’re presented with a few zones to race around in. Most are locked to begin with, requiring you to race around and collect various items to unlock the other zones, and further your progression through the story.

There are 5 zones to race through: N. Sanity Beach (you start in this zone), The Lost Ruins, Glacier Park, Citadel City & Gem Stone Valley. Having completed all tracks and challenges in these zones, Nitros Oxide appears before you. Now, the fate of all humanity rests on you and your kart driving ability… GAMEPLAY + CONTROLS
The game-play of Crash Team Racing: Nitro Fueled remains very mirrored, if not the same, as the original Crash Team Racing. The game consists of you, the player, piloting through numerous race courses with the aim of reaching first place as you cross the finish line. Like the rainbow crystals in Mario Kart, the famed brown crates from the Crash Bandicoot series litter each course, with power-ups being supplied to the player per-breakages via drive though. The tracks are all varied in style, layout and theme with many of the original tracks being wonderfully re-imagined. Also new in this edition are remastered race courses from Crash Nitro Kart (released in 2003) & Crash Tag Team Racing (released in 2005).

But the remastered courses aren’t the only new feature of this wonderful remaster. Unlockable karts, kart colour schemes, wheels, kart decals, player skins & online multiplayer and ‘Pit Stop’; an in-game store that allows further purchasable unlockable items via ‘Wumpa Coins’, which are awarded per race / challenge end, round out the brand new features. It really does add an entirely new depth to the game, as this feature was sorely missed during the original. A cool addition to the unlockable character skins is the fact that each alternative skin provides the player with a different victory screen dance. It’s the devil in the details with these things, and the team at Beenox have really hit the nail on the head with this.

In an even further incentive to the new, and returning players to the Crash Team Racing series, upcoming DLC entitled ‘Grand Prix’ will eventually be released, allowing the player to compete in special challenges. These challenges will provide exclusive currency and rewards, including brand new, never before playable characters (including the previously mentioned Spyro the Dragon!) During Story mode, after zipping around the first few tracks of starting area N. Sanity Beach (with a few wins and first place trophies under your belt) the boss of the current zone you’re in appears, challenging you to a race. These usually revolve around racing said boss in their self-titled / themed race course, with the boss setting up traps and using weapons against you in hopes of slowing down your progress. After defeating that zone’s boss (whom in this version of the game, after defeating them you instantly unlocked is added to your roster) you are rewarded with a key to unlock the next area. However, the tracks you had just completed are reopened, now with additional items to collect. They are as follows: After collecting all the color schemes for a certain color of CTR tokens, another area will appear on the map:

But the fun doesn’t stop with Adventure / Story mode. You have an array of other game-play options to compete in. Time Trial mode will really test your speed, challenging you to get the fastest time possible per course. Doing so will unlock a ‘time trial ghost’ by the name of N. Trophy. Beating the ghosts of each level will unlock N. Trophy for playable use. Be wary, as this Time Trial is very, very intense!

Arcade mode allows for a quick play set up, choosing to race in a single track or compete in Cup races, similar to the previously mentioned Gem Cup. Each Cup is, again, complemented by four tracks. Completing these cups will unlock new battle-area maps for use in Battle mode.

VS mode pits you against your friends. Race it out to prove who’s the superior driver! Last, but not least, Battle mode. Similar to the mode featured in Mario Kart, up to four people compete in an arena, using weapons to take out their rivals’ lives. Last man standing is declared the winner! GRAPHICS + SOUND
Off the top of my head, I cannot begin to describe the sensation I felt upon loading up this game for the first time, being greeted by the racing announcer voice and theme from the original game. Only this time around, everything was in beautiful 4K definition, with stunning graphical recreations.

All characters have been beautifully remade and restored, giving them an on-screen personality, making them feel almost life like. But the real stunning feature of this game has to be the level re-design. The image above shows just how much work and stunning attention to detail the developers have made on this game. The worlds are alive with NPCs frolicking in the background, to a darkened, rain swept level’s raindrops splashing against the screen, and the newly made speed warp zones will send your character flying, with their body stretching and, well, warping from the speed! For the returning players, this provides an amazing ‘welcome home’ nostalgic feel, whilst breathing new life to the brand.

The soundtrack has had a well deserved HD update, with all song tracks and menu music sounding crystal clear and precise. All in-game voice overs have been re-recorded and all in-game cut-scenes rebuild from the ground up. The race course track music will shift and change, depending on your characters placement in the world / track. E.g. underwater dulls the music, whilst hitting that third and final lap will send the music racing, providing an audio intensity to the race. This is a huge relief, as the original game suffered criticism for the questionable audio quality.

CONCLUSION
Crash Team Racing: Nitro Fueled is an exceptional remaster. I strongly advise every one of you out there, returning or new, to play this game immediately. It provides family fun, whilst challenging the inner gamer in us all. 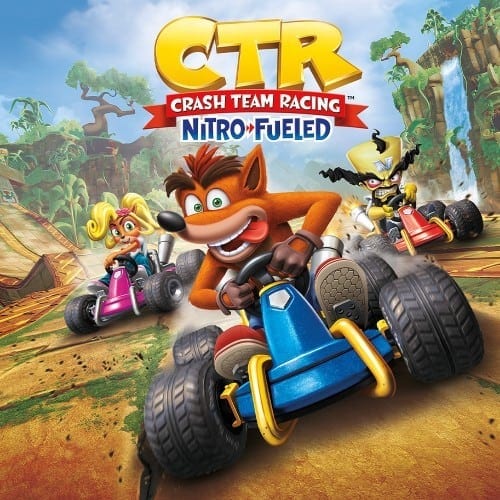 Published by: Activision
Developed by: Beenox