‘Dead or School’ is an indie game developed and published by Studio Nanafushi with the help of Marvelous Inc. You play as Hisako, a teenage girl who is stuck underground with a few hundred survivors. A plague has swept across the world causing mutants to appear, resulting in a war that forced humans to retreat and hide away in their underground communities. Approximately 78 years have passed when Hisako hears of a place that used to exist – School. A place of fun and learning. She becomes determined to go to the aboveground, eager to see for herself what has become of the world.

‘Dead or School’ is a fun hack and slash, side-scroller with main character, Hisako, having access to a sword as well as short and long ranged guns. You’ll need to cycle through your weapons depending on what enemies you are facing. Dead or School has the standard three difficulty levels, and as you go through the game you can level up both your character and your weapons. Enemies will also drop resources that can be used to craft upgrades and reinforce your weapons.

The enemies are interesting. You’ve got plain mutants that behave much like zombies, shambling around as they try to hit you, then you’ve got those same mutants with special abilities, such as throwing fire or bombs, or the occasional gun-wielding lunatic. You’ve also got the Mutant Fat. This guy looks like something out of ‘Resident Evil’ or perhaps even ‘Doom’. Very fat and ugly, he will sometimes throw stuff at you, but will also try and close the gap to give you a good slapping. The last enemy that caught my immediate attention was the ‘Frogmen’. Like the name suggests, these guys look like frogs and jump around hitting and biting you, while occasionally spitting fire. Dead or School conveniently tells you which type of enemy you are dealing with, the name hovering on screen, complete with a health bar. 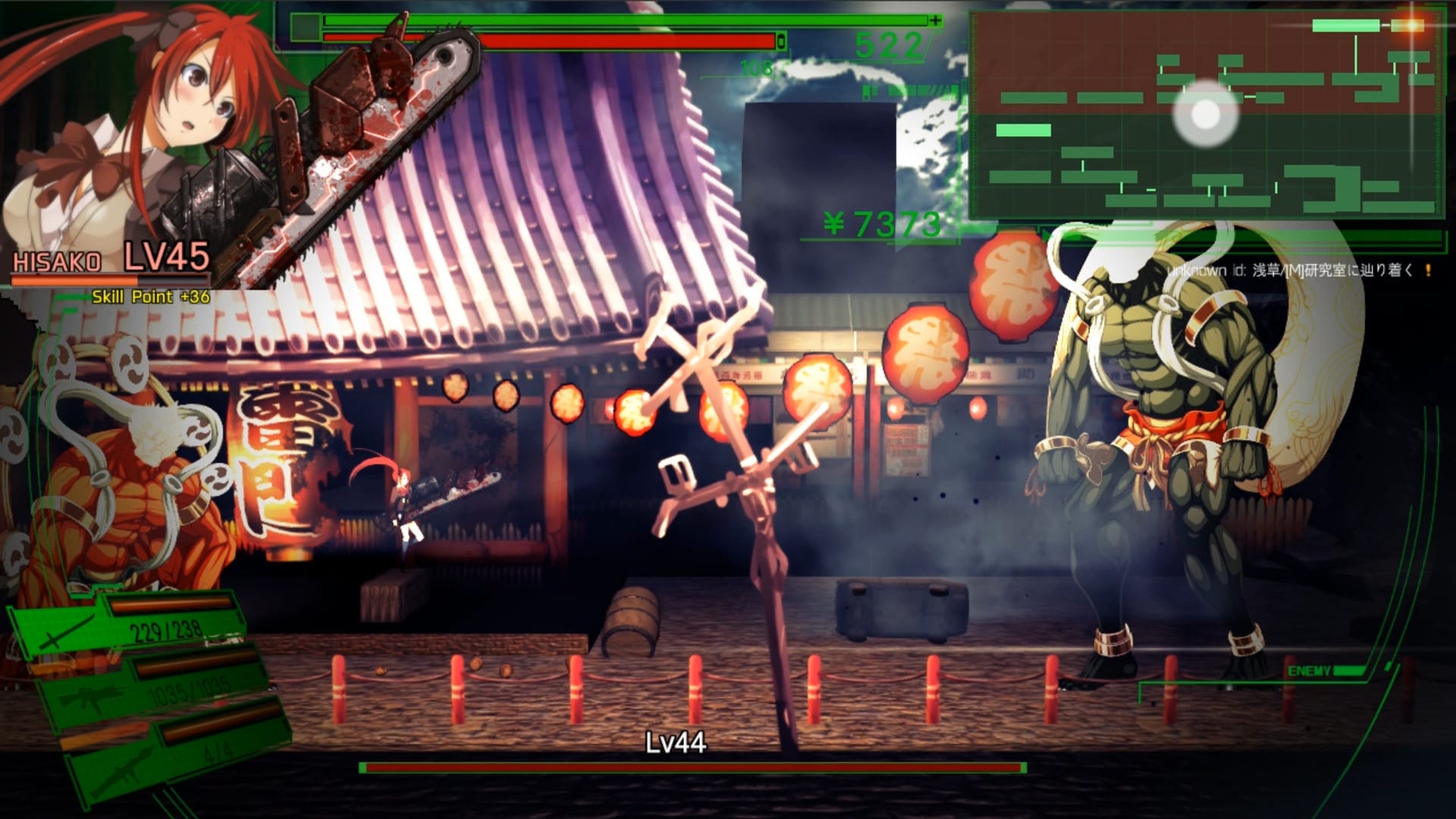 I found the game to be very easy to master. As a side scroller, you move across the screen as enemies appear, jumping, shooting and slashing about. I did find the camera to be a little annoying, as it uses quite a large field of view. It seems the developer knew this, as during some darker areas, a green arrow would appear above your head to indicate where you were. As expected, your weapons will use ammo, but you’ll also need to account for their durability throughout the game. You’ll want to keep an eye out for checkpoints that resemble vending machines. These checkpoints will allow you to replenish your health, as well as develop your skills while editing and maintaining your weapons. Because there are no health packs or ammo during a level, the only way to stock up is at a vending machine, which makes the game feel a more desperate and trickier sensation.

The art style felt a little dated, or at least for me it did, like something you’d see in a PS2 game. The characters are mostly female and all feature your standard anime-like designs. You guessed it. Over-exaggerated breasts. A slight tangent here, but I don’t understand who this game is catering for. If you make your protagonist a female, does that mean you’re hoping more girls will pick the game up? When your health gets below a certain point, a cutscene occurs where Hisako is thrown back and part of her clothes are ripped away. This is completely unnecessary and annoyed the heck out of me.

Anyway, you move around Tokyo’s underground via the old train tracks. As you’re somehow fortunate enough to have a working train, you can move about the world effortlessly, but the animation was so flat and dark that the details were lost. The train stations complimented the game well, each one being uniquely dark and filthy, with different graffiti on the walls. Others had frozen over, so you needed to break icicles to make your way through, and some even had you jumping over pools of lava. 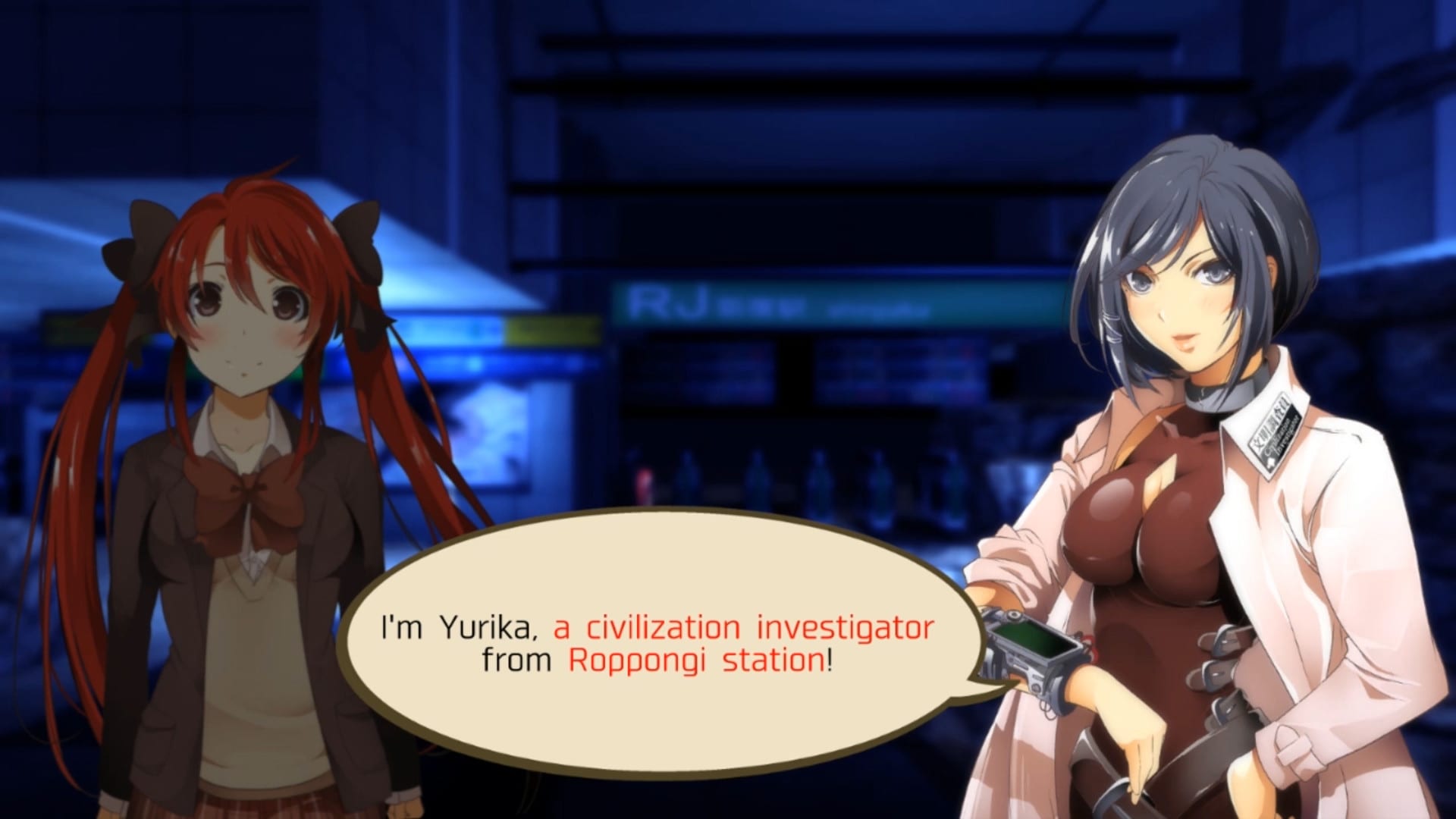 The music was one of the best features; constantly changing depending on whether you’re fighting, adventuring or completing a puzzle, even the pause screens had different scores. While most of it was hard rock and heavy drums, there was enough variation in the tempo and tone that even if you were blindfolded, you could easily tell what might’ve been happening on screen according to the music. The mutants all made their own growls and cries, while Hisako’s weapons had their own unique sounds. True to its form, Hisako’s cries as she jumps and slashes all sounded more sexualised than necessary, something seemingly mandatory when it comes to anime.

While, Dead or School was not as user friendly as it could have been, I did enjoy it. Hisako was endearing, and the friends she made along the way had me wanting to get to the school just to see how the game finished. The camera having such a wide perspective made it challenging to see where you were or what you were doing. Occasionally I would get stuck and would need to jump to get past an invisible rock, or the stats from an object I had collected were floating on the screen, which then meant I couldn’t see enemies’ health bar and I swear I should’ve defeated it.

Overall, I found the game challenging and intriguing, although I don’t understand why someone would choose a school to be the reason to return to the war-ravaged surface. What about the beach? A coffee shop even? These little nuisances aside, Dead or School is definitely a fun game with an interesting story that any fan of anime should be excited to play. 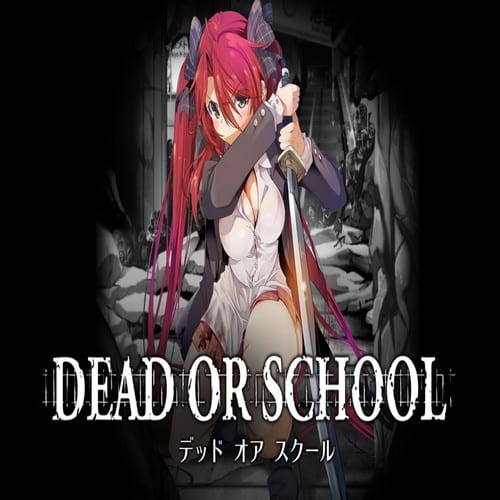 Underground dwelling girl Hisako is aiming for the surface in a zombie infested Tokyo. Hack and slash RPG! Obtain weapons and gear from enemies, and customize your skill tree to create your own unique and powerful a character!