After the KGB (Komitet Gosudarstvennoy Bezopasnosti or Commitee of State Security) try to assassinate Crypto, a devious grey alien, and destroy his mothership all hell is unleashed from this alien menace. Crypto, with his heart set out on revenge, carves a war path through the human race, collecting brain stems as well as exterminating the Furons’ enemy from the Martian War, the Blisk.

As you are on planet Earth you’re sometimes required to impersonate people to avoid detection and to stop alerting the human race that Aliens are in fact among us. With the help of the Holobob you can change into high end people to woo the crowd over. You are given multiple choice dialogue options using this ability to make sure you do not arouse suspicion to the humans for them to realise something is wrong. 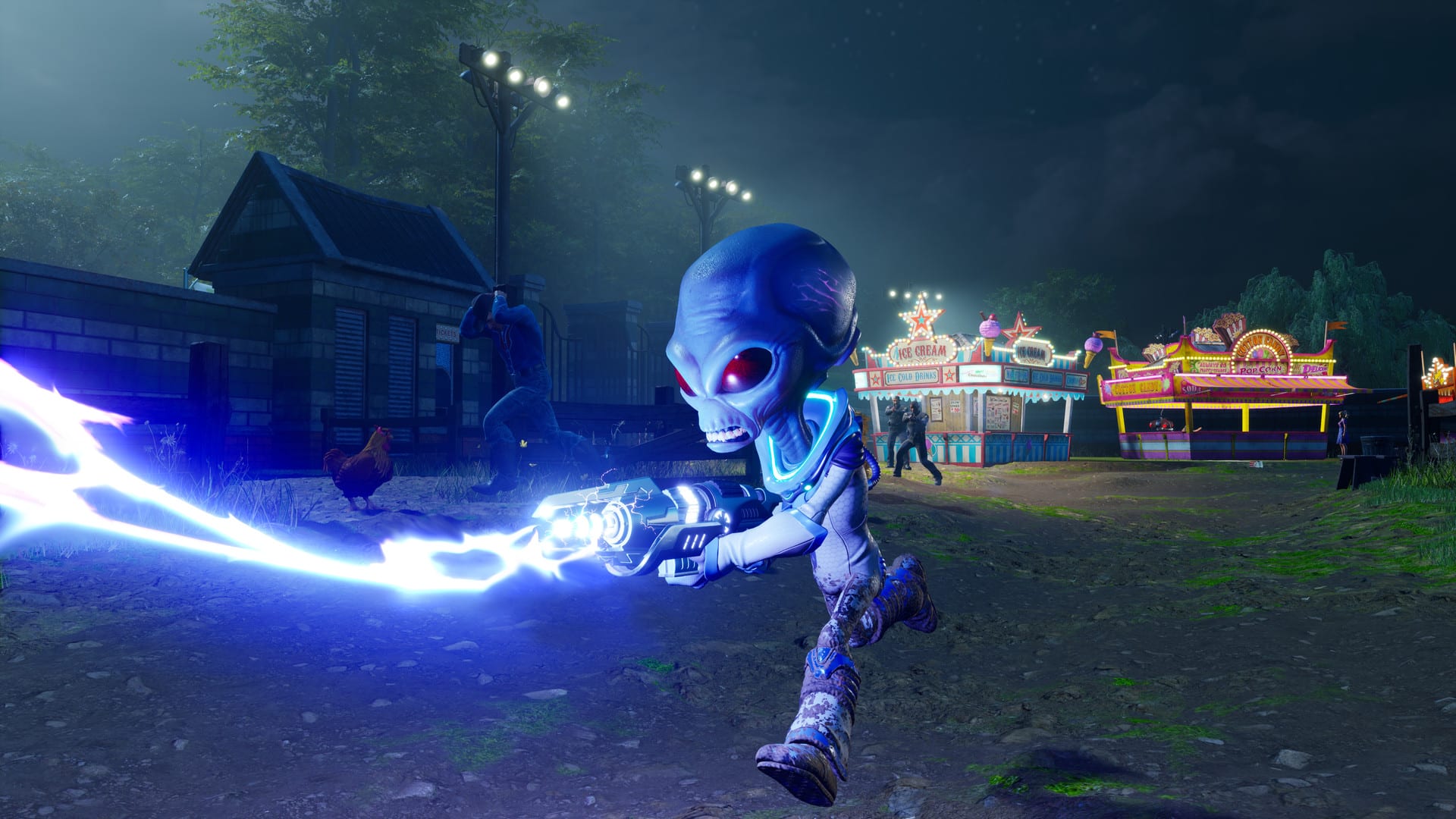 While you run around the world getting ready to destroy all humans the targeting system is so smooth, you have complete control of where you would like to move. Using your gravitational weapons you can lock onto your targets to grab and throw them into the air or as I like to do; throw an explosive barrel to create a combo takedown!

In the original Destroy All Humans!, you were required to stay back after the first mission to collect enough brain stems before you could return to the mothership, whereas in this remake those requirements no longer need to be met in order to progress onto the next mission. Once a mission is completed, you will then be sent back to the mothership to look over any upgrades that you want. Once unlocked you can then choose to go into the next mission or return to any other area and free roam to get all of the collectables. This makes it much easier instead of needing to backtrack for them while playing through the story missions.

Orthopox, your chief officer, gives you instructions that can appear in a mini hologram ship, creating free movement to continue your game instead of having to bring up the dialogue on screen between the two of you, like you had to in the original. While I found the story and the missions just as entertaining as when I was younger, I did find the missions quite short and concluding before any real payoff was established. 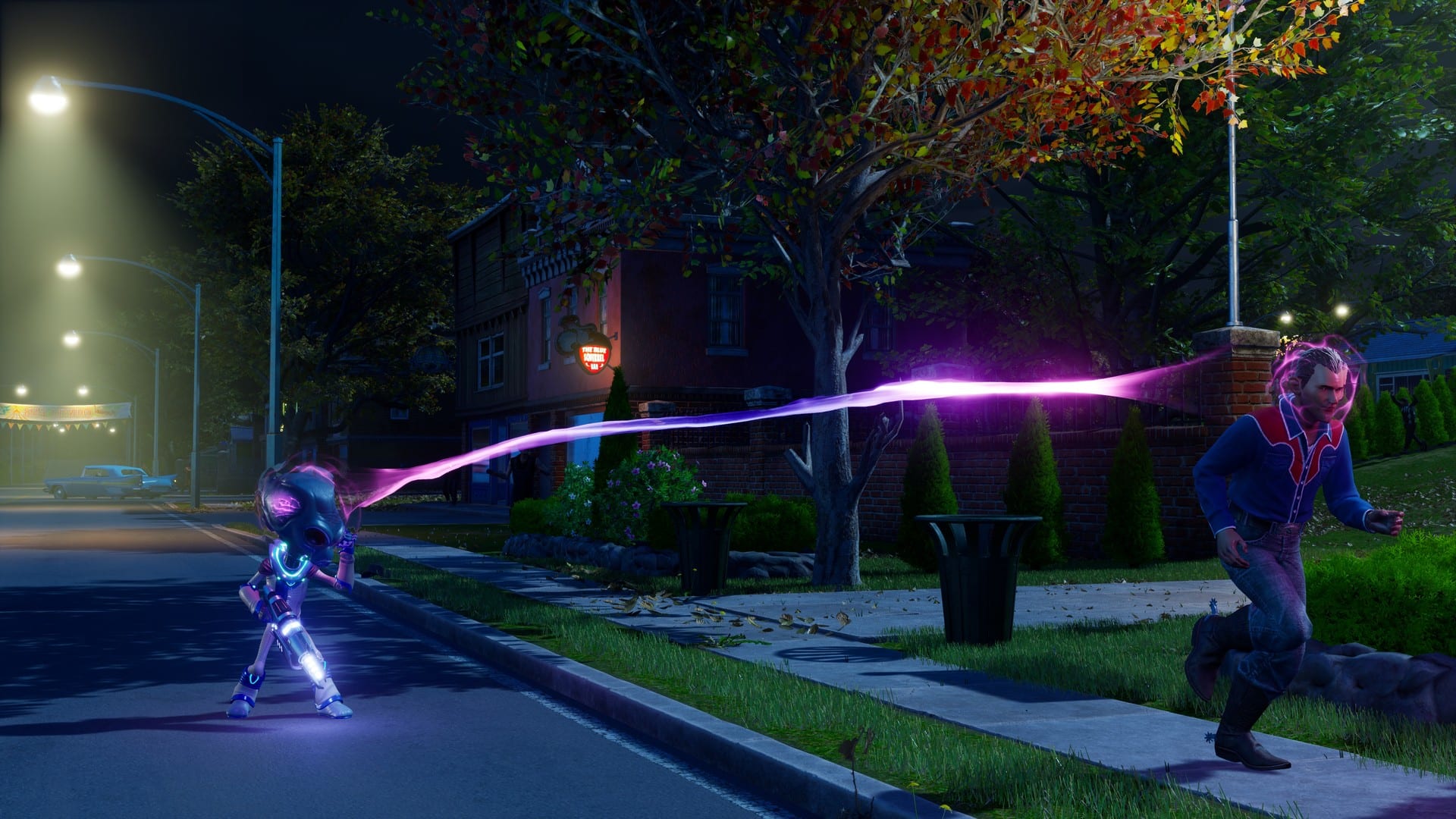 Completing some of the side missions will allow you to unlock some character skins for Crypto, giving you a whole new hilarious look to the grey, space aged alien we all know him to be. These can be used in any mission and are even included in the cutscenes when you have them equipped, like any good remake should.

Whilst Destroy All Humans! is a cartoon style game it has crisp animations. All the edges seem very smoothed out when it comes to the postcards and loading screens; it is on a whole new level of remastered quality. Using the same dialogue and voice actors as the original, it makes you feel as though you’re back in the original game itself and with all the nostalgia it brings. Playing both games makes you really realise the attention to detail that has been added, especially when looking at the scenery. From the ground burning and changing colours as the fire spreads, to the rays of the ship and even the buildings being destroyed yet still keeping a structure instead of disappearing; a lot has gone into updating this for 2020.

Still keeping most of it like the original such as concepts and gameplay, I am beyond impressed with the quality of Destroy All Humans!. It has brought back multiple fond memories of this franchise whilst creating even better ones now. 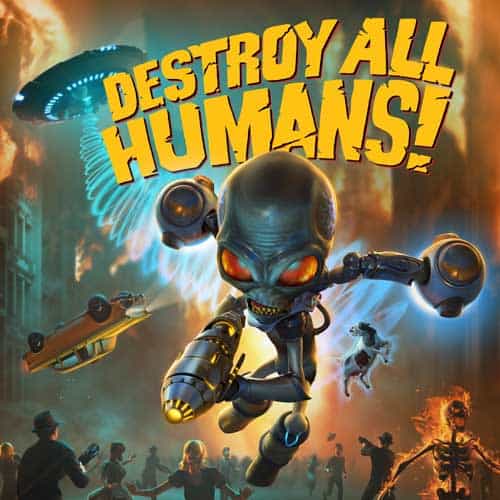 The cult-classic returns! Terrorize the people of 1950's Earth in the role of the evil alien Crypto-137. Harvest their DNA and bring down the US government in the faithful remake of the legendary alien invasion action adventure.