In the world of Vaneria, an ongoing war rages between humans, witches and dragons. The humans see both the witches and dragons as threats to their society and want them all dead. The dragons are large beasts who naturally want to destroy anything and everything around them. The witches have supernatural powers and are the reason the dragons exist and can reproduce and are unfortunately stuck in the middle and are doing what they can to survive.

Taking the perspective of witches in this JRPG game, players will take control of three main characters including Zephy originally a human and member of the Knights of Requiem who are sworn to kill all Witches and Dragons, as well as Minessa and Karikaro both of whom are witches who find Zephy on his own about to be eaten alive by a Dragon, which they fight off and save his life. At first they were going to leave Zephy behind and move on, but Minessa feeling sympathy for this fallen Knight, decides to try and revive him. Successful, they suddenly discover he is beginning to develop witch-like powers which complicates matters and sets the tone for the rest of the game. The main appeal of the game are the battles, and players will also be taken through tutorials to learn how the battle system works. The game does a good job of explaining the keys to defeating dragons of various shapes and sizes as well as other humans and witches you meet throughout. The battles are turn-based strategy similar to other games of its genre. Instead of just having two teams facing each other on either side of the battlefield, the characters are all flying above the ground and there are three layers where all the characters can be positioned. This can affect the player’s decision on what attacks to use against the opposing team. There are basic attacks that do low damage but have unlimited use and variations and advanced attacks that use up SP but do higher damage, which are especially useful against more powerful enemies.

Enemies may be spread out around or be above and below each other on one of the three layers. Basic attacks will only target one enemy, but more advanced attacks can target multiple enemies at once depending on how they’re positioned and which direction the attack comes from. For example, some characters can summon elements from the ground below and have it shoot upwards to damage anyone in the way, while another character can bring down shooting stars (it’s actually what the attack is called) from above and rain down on enemy targets below. Players will even face very large dragons that take up all three layers of the battlefield, but will have more than one health bar making them more challenging to take on. The three layer system is definitely something unique and not seen in many other JRPG games. The level up system will be familiar to fans of the JRPG genre. Strengthening up your characters will be essential for facing tougher opponents later on. In between battles, players will get to explore different and unique areas of Vaneria, collecting various items, uncovering new areas and encountering more dragons.

Even though (at the time of this writing) this game is a PlayStation 4 exclusive, the graphics of the characters and environments feel more like a PlayStation 2 game. Though, it’s not entirely a bad thing, the character models don’t quite best represent their artwork which you’ll be seeing a lot of in the lengthy cut-scenes. The cut-scenes are predominantly still images of the of the characters speaking, but do have some movements giving them a bit more life. The artwork of every character is incredibly detailed especially in high resolution.

The soundtracks playing during the cut-scenes varies depending on the mood and setting and fit in really well. The voice overs of every character are also enjoyable to listen to, but not every scene will have voice overs and has text added to keep the story going. The inconsistency of the voice acting is unfortunate. It’s understandable if it’s just text for less important scenes, but there are some pretty big moments that really could’ve made use of the voice actors’ talents. One big moment very early in the game is when Zephy begins to develop his witchy powers. It’s a shame this particular scene was purely done using still images and players only know what’s going on by reading the text at the bottom. It’s a wonder why this scene (and more later in the game) wasn’t illustrated using the in game graphics and the voice overs to really add to the emotional scene.

Players will either enjoy the long and detailed cut-scenes or grow restless and skip them to get to their next adventure quicker for more exciting and challenging battles. Though there are better alternatives out there, Dragon Star Varnir is still an enjoyable and unique adventure for fans of the JRPG genre. 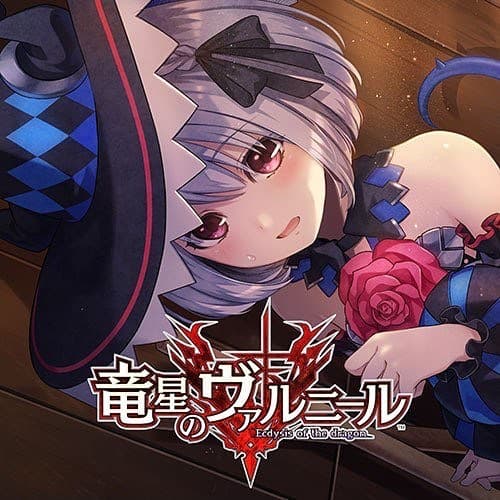 In a world where the bones of an ancient beast tower over the land... The Knight Zephy is part of an order whose role is to hunt down witches –people seen as cursed beings for giving birth to dragons. When he is almost killed on one of these missions, two mysterious witches save him from the brink of death by feeding him dragon blood.