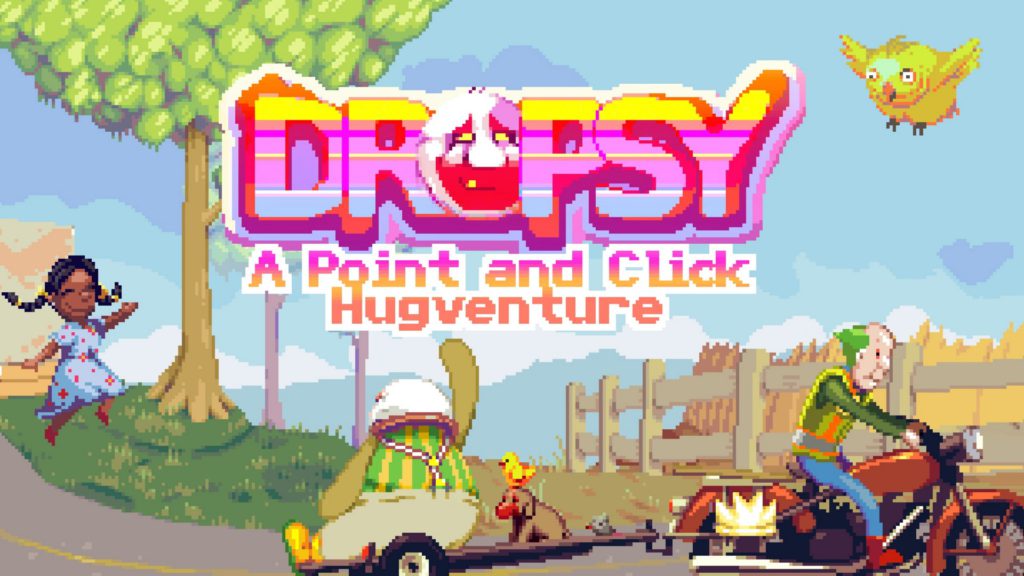 Dropsy is a demented but oddly endearing point-and-click adventure developed by A Jolly Corpse, and of course, published by the connoisseurs of weird, Devolver Digital. This seemingly twisted and grotesque game will take you on a journey of tragedy, loss, and love, and is the epitome of the statement “Don’t judge a book by its cover”.

Dropsy is a clown, a terrifying but traumatised clown, tormented by a recent fire at his circus home. His name now tarnished in a town that wants nothing to do with him, this is the tale of one sad clown’s actions of redemption.

Dropsy will hug his way through multiple problems with his trusty little pooch, searching and uncovering the dark secrets that hide in his surrounding town. The story itself is pieced together through your actions and is quirky and interesting in its approach. There is a drive to keep pushing on, even when it comes across as a challenge to progress. 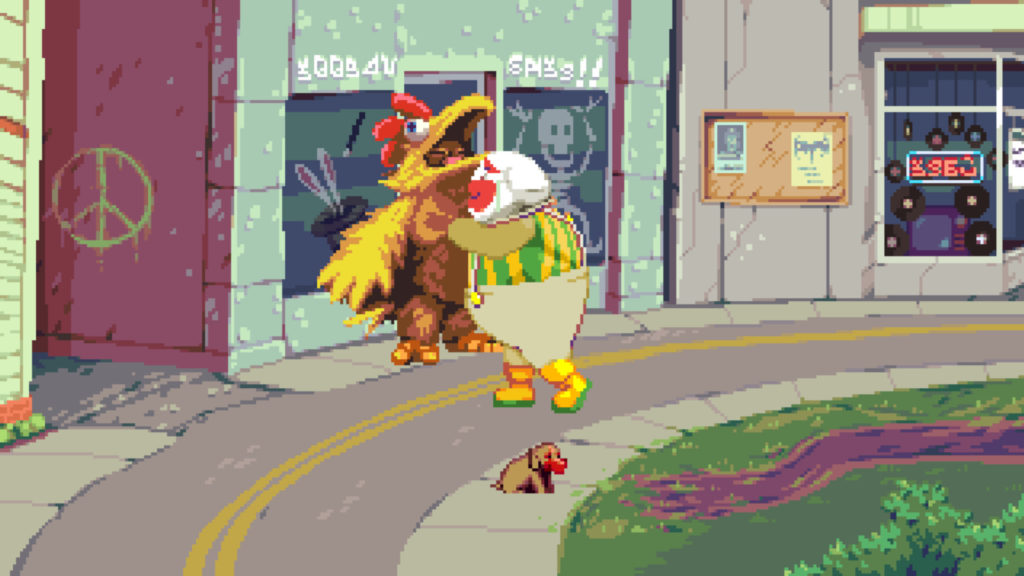 Speaking of progression, the gameplay itself is very simple. Much like point-and-click adventures of the past, such as the likes of ‘Monkey Island’, your main objective is to collect items and interact with them in the correct place and time as the game cycles through night and day. The challenge that is added to this is the fact that the characters have no verbal dialogue and instead interact with Dropsy through pictures.

This can be incredibly frustrating at times but there is such a sense of achievement when you do get that “AH HUH” moment as you solve the puzzle. It is a shame though that there is no written or voice acting as it definitely could fill in some of the more dubious questions still lingering in my mind and also help with some sort of connection with the other characters. 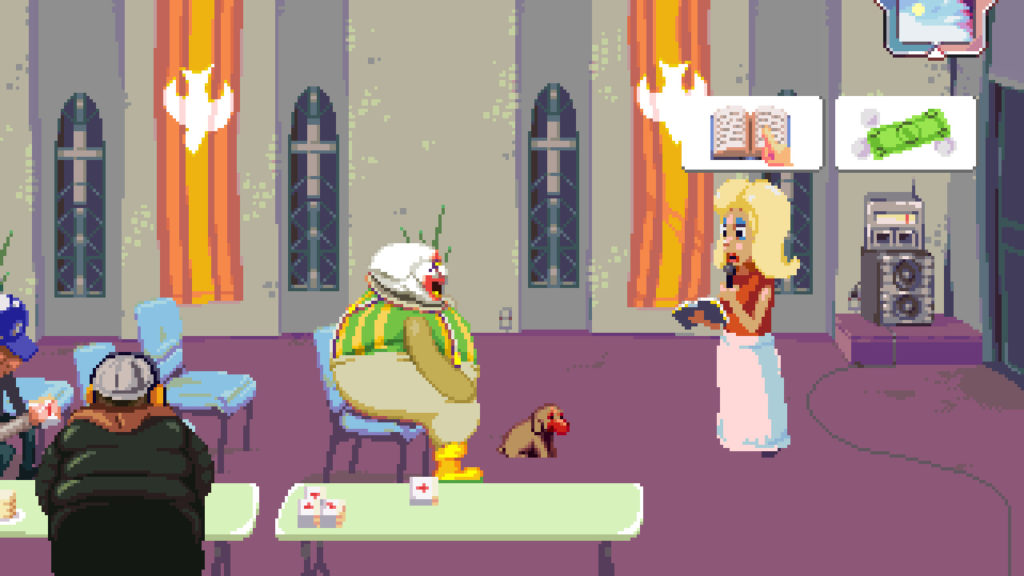 The art style is unnervingly bright with a very arcade-like 80s style. Harshly pixelated, it is quite jarring on the eyes at first, as you are thrown into some acid trip-like scenes. As you walk around the map, however, it seems to mellow out significantly and you can actually marvel at the detail punched into the scenery, environments, and characters. Each character particularly oozes their own style, thus developing their overall charm.

The game’s soundtrack, composed by Chris Schlarb, is also very reminiscent of a vintage arcade. It is very comical, jazzy, and retro, and I didn’t find it as overly aggressive or repetitive as the bright neon colours it complements.

Overall, Dropsy is definitely an interesting title. A solid adventure were working out what object goes where can really unlock some touching moments, despite Dropsy’s quirky and often terrifying shell. 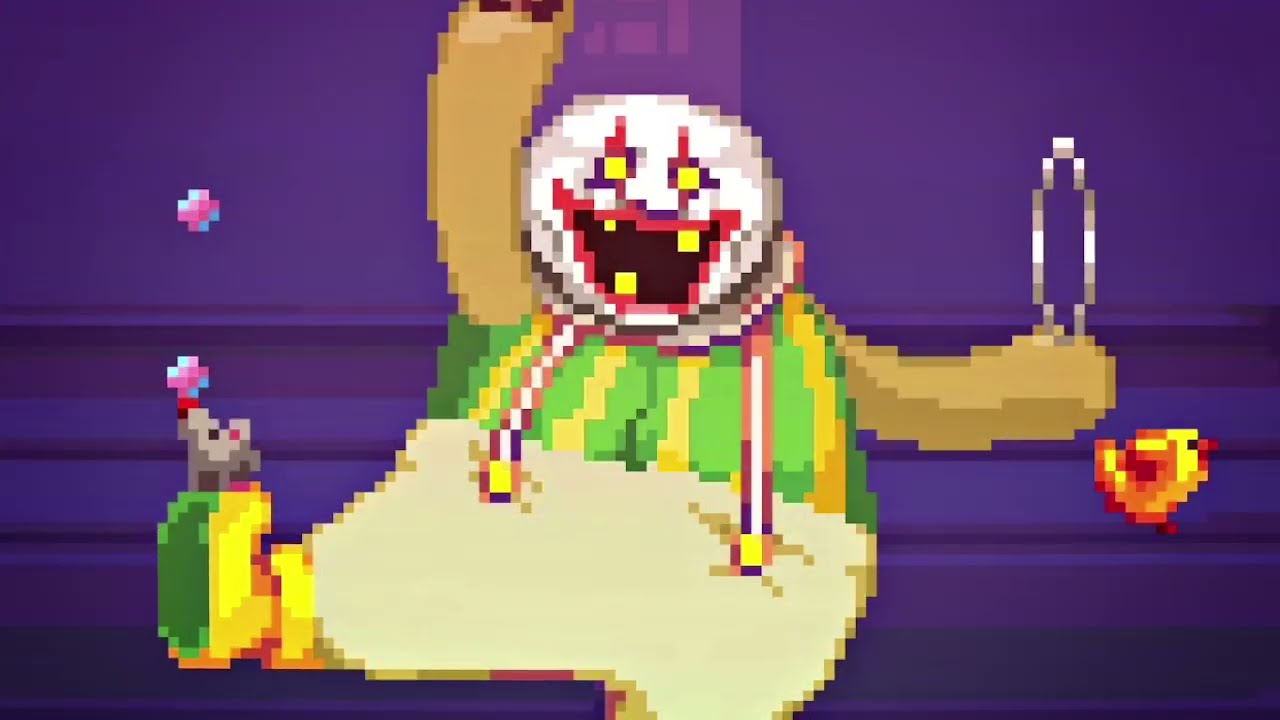 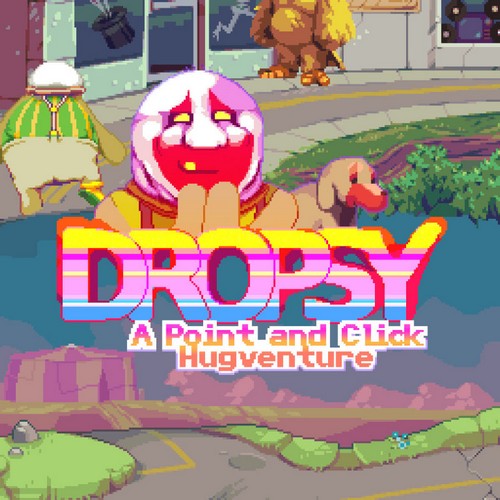 Published by: Devolver Digital
Developed by: Tendershoot, A Jolly Corpse

Dropsy is a non-traditional take on the classic point and click adventure formula starring the game’s perpetually carefree namesake clown as he explores a richly detailed world full of colorful characters and sinister secrets, doling out hugs along the way.