There is a certain something about simplicity that can take you by surprise when you least expect it. It may appear bland at first but the beauty of the subject can also flourish under those same conditions. Enter Dungeon Encounters, a raw and pure form of a JRPG made by legendary Hiroyuki Ito, who has helped influenced the genre since Final Fantasy 6. Published and developed by Square Enix, this dungeon crawler is a single player with one simple goal, reach floor 99.

It is not often that the only shred of storytelling for an entire game can be accomplished with one paragraph. After selecting a save file, the game offers a mysterious scenario, a labyrinth appears which begins to pour out all sorts of ravenous fiends.

There were parties brave enough to attempt to stem the horde with their magical and physical prowess, unfortunately not one returned. With the little options remaining, it now falls on the remaining villagers who are willing to step up. 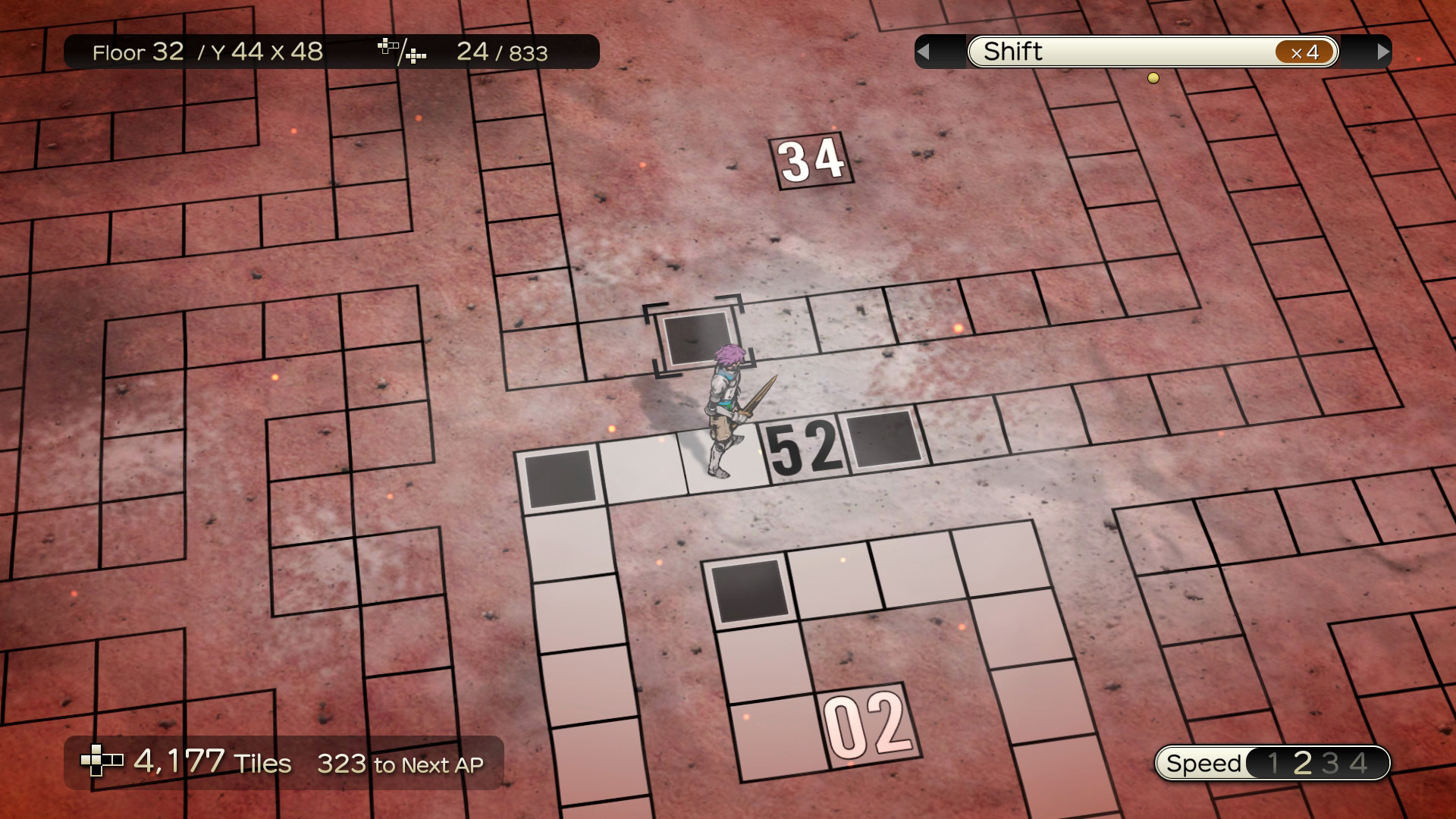 Each character that is available in the game is listed at the beginning when you are assembling your team. You have four slots available to put together a team able to wield magic spells and physical attacks. The brave souls who ventured in first and never returned are now labeled as wandering and are significantly stronger but must be found if you want to add to your party. For those that wanted to squeeze a little more storytelling, every character has a bio for a bit of backstory if that helps to immerse or motivate you further. You really cannot go wrong with picking a team as it is a well-balanced experience throughout and through dedication, you can carry a starting character to the end game.

Artistic intent is probably the best way to describe this minimalist approach. This game felt like the busy work of a Dungeon Master brought to life. The playing field is literally a set of grid work mapped out on parchment with Y and C coordinations on the top of the screen to keep track of your journey. As you walk across each square it will be inked in and the squares with numbers will be used to trigger all sorts of events.

At first, it appeared to be random but it will eventually form a pattern that makes navigating each floor more and more engaging. Traversing the plots of squares was a serene experience with the relaxing and tranquil soundtrack only broken up by the arcade-inspired combat music. 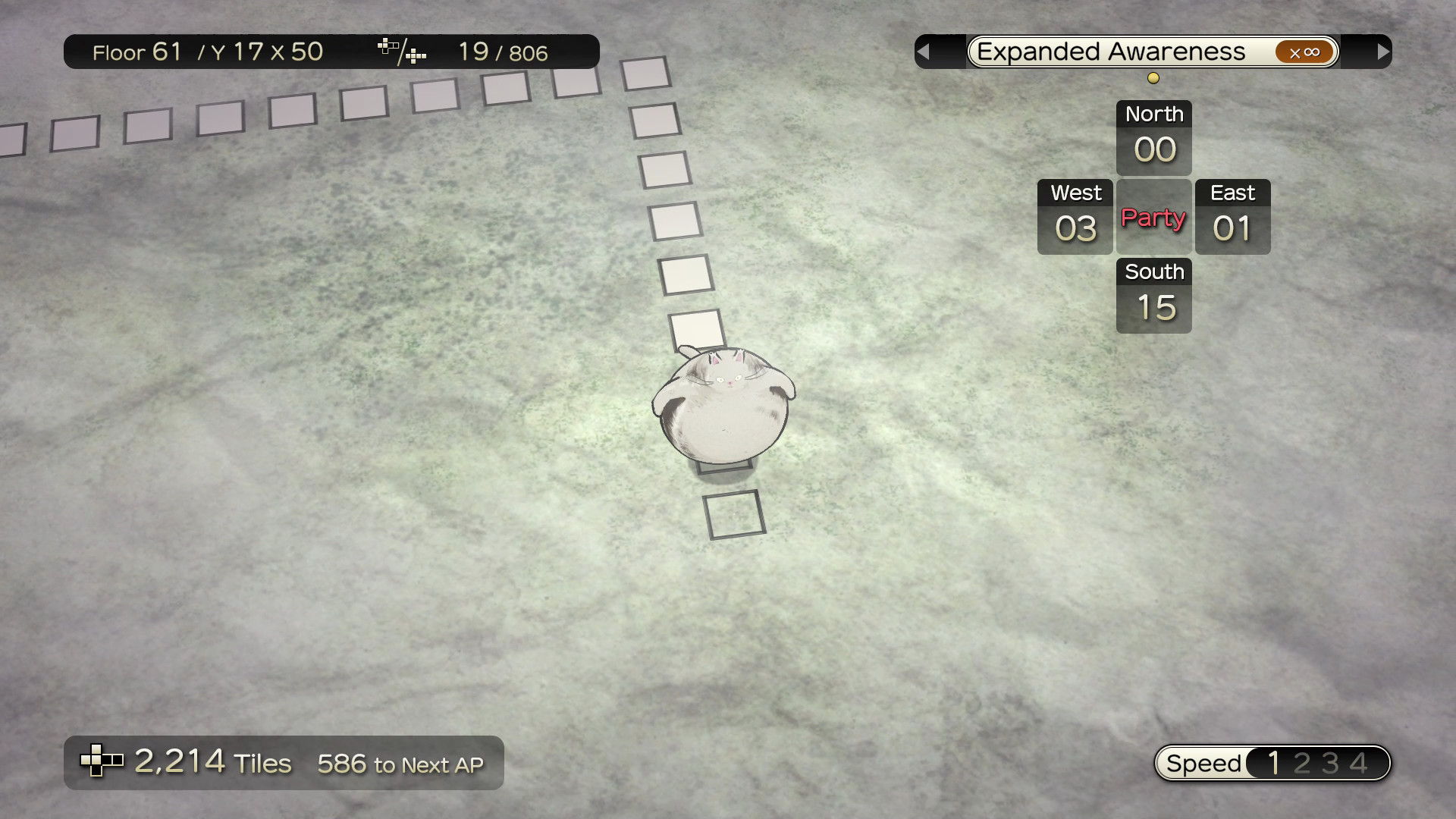 Random fights will occur with some witches, skeletons, golems and some giant killer Mantis boss fights to boot. While the boss fights were interesting, the other enemy types were not very imaginative. Combat is dictated through three key factors, magic defence, physical defence, and health. To do damage to their health, you must destroy their magic or physical shield which can only be damaged by the appropriate damage type. Forgoing the original RPG troupe of attacks having limited uses, the turn-based combat was only limited by the amount of health and revive options. When you die, and you will, you will be sent back multiple floors if you haven’t saved your progress on the right floor.

With the Switch’s portable options I found this was almost the best way to experience the unique Dungeon crawler. Given the nature of working your way up the 99 floors, it became just as easy to pick up as it was to put down. It was a marathon to the top and not a sprint, the only downside was having to keep track of points of interest outside of the game through pen and paper of my own.

I am not sure if this experiment will branch off into other games or if this was a one-time deal. Even if it was just a once-off, I’m glad I had a chance to play the works of a genius. 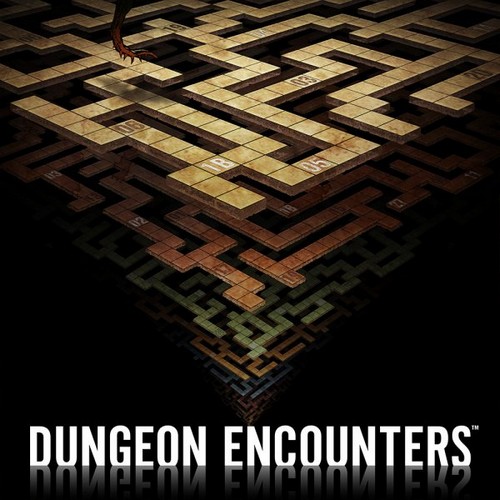 Dungeon Encounters is a unique dungeon exploration RPG in which you lead an expedition to chart the depths of an otherworldly labyrinth.