Published by Zordix and Green Man Gaming, and developed by Invictus Games, Dustoff Z is a spinoff of the Dustoff series which focused on players taking control of a military chopper, flying into war zones, shooting down enemy vehicles, rescuing hostages and bringing them back to safety. Dustoff Z is mostly the same game, but set in a zombie apocalypse, where players must shoot down zombies of all shapes and sizes while rescuing survivors. This game is due to be released on various platforms mid-October.

Beginning the game in this demo, players will be taken through a helpful tutorial explaining the game’s mechanics. The game is very easy to pick up and play, and very beginner friendly. The main objective of the game is to shoot down zombies and rescue survivors, but each stage is different and becomes progressively harder, which gives the games lots of variety. The gameplay is very reminiscent of the classic arcade game ‘Choplifter’, released all the way back in 1982.

Manoeuvring the chopper is very easy and smooth to get from point A to point B, avoiding obstacles and reaching the objective. Along the way, players will need to shoot down zombies which will drop items such as fuel to keep chopper running, health to repair damages to the chopper, and ammo to keep the shooters stocked up to gun down the zombies. It may sound simple, but there’s more to it than just flying over hordes of zombies, as they can actually throw some debris towards you and some can even jump really high and hang onto the chopper, meaning players will then need to shake them off before things get worse. 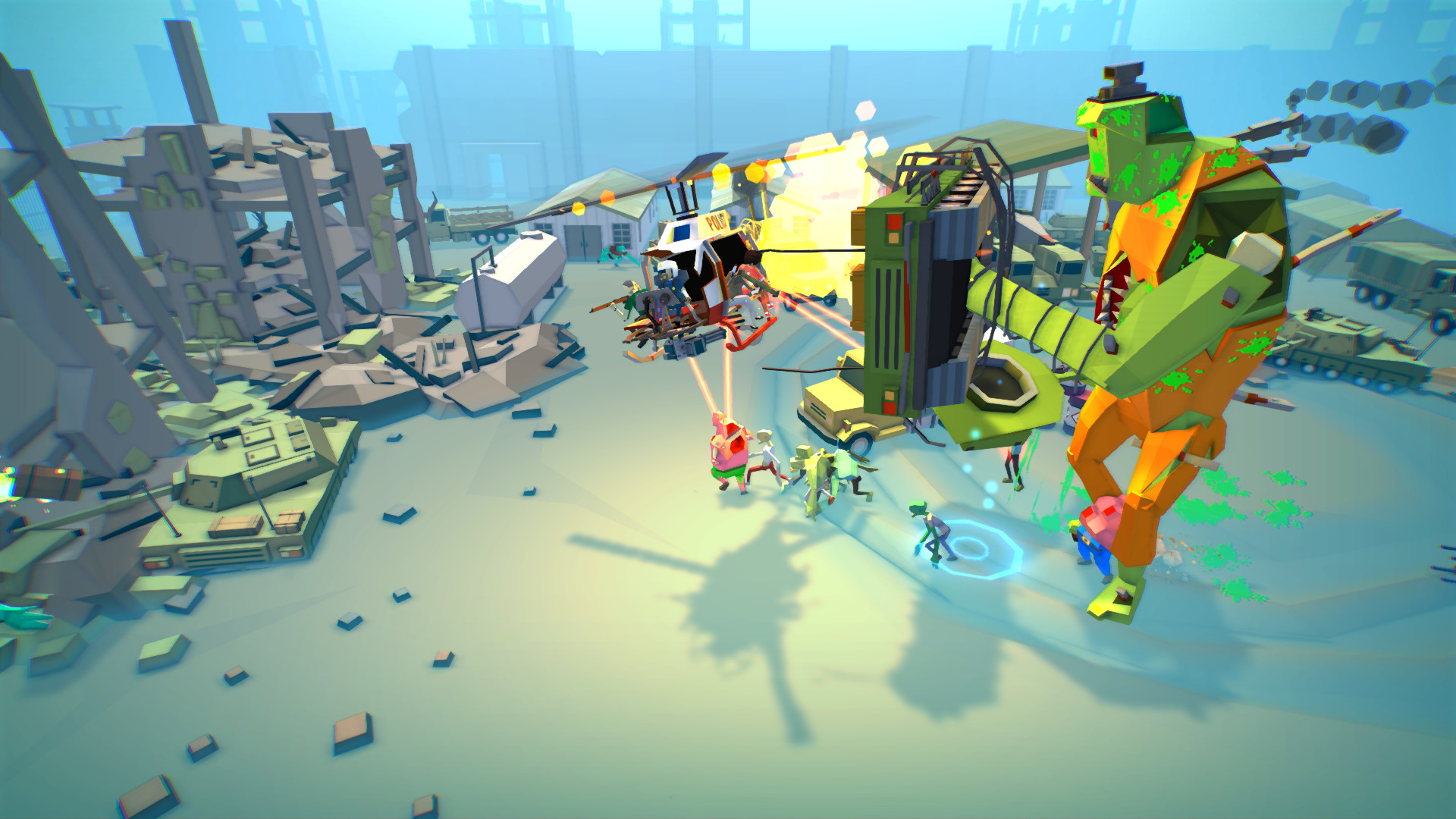 Some stages will even have a boss battle. For example, with the very first boss being a giant scarecrow that’s almost as tall as the screen. Players will need to make use of all their skills, while maintaining the chopper’s fuel and damage, while keeping the ammo stocked up for the shooters.

Rescuing the survivors is also easily done. Once they’re located, players will just need to descend slow and steady, rather than hitting the ground too hard, and allow the survivors to enter the chopper. Players will then need to fly back to the safe camp, while also keeping them and yourself safe from the hordes of zombies along the way. In some stages, vehicles will also need rescuing as well and the chopper comes equipped with a crane attached. It’s as simple as lowering the crane, hovering over the vehicle allowing it to grab on and carrying it back to the safety of your camp.

Various shooters who ride with you can be recruited, who each have their own gun style and unique ways of shooting down the zombies. One of the shooters who can be unlocked later in the game, is a clear reference to Arnold Schwarzenegger as the Terminator carrying a gatling gun just like in ‘Terminator 2’. 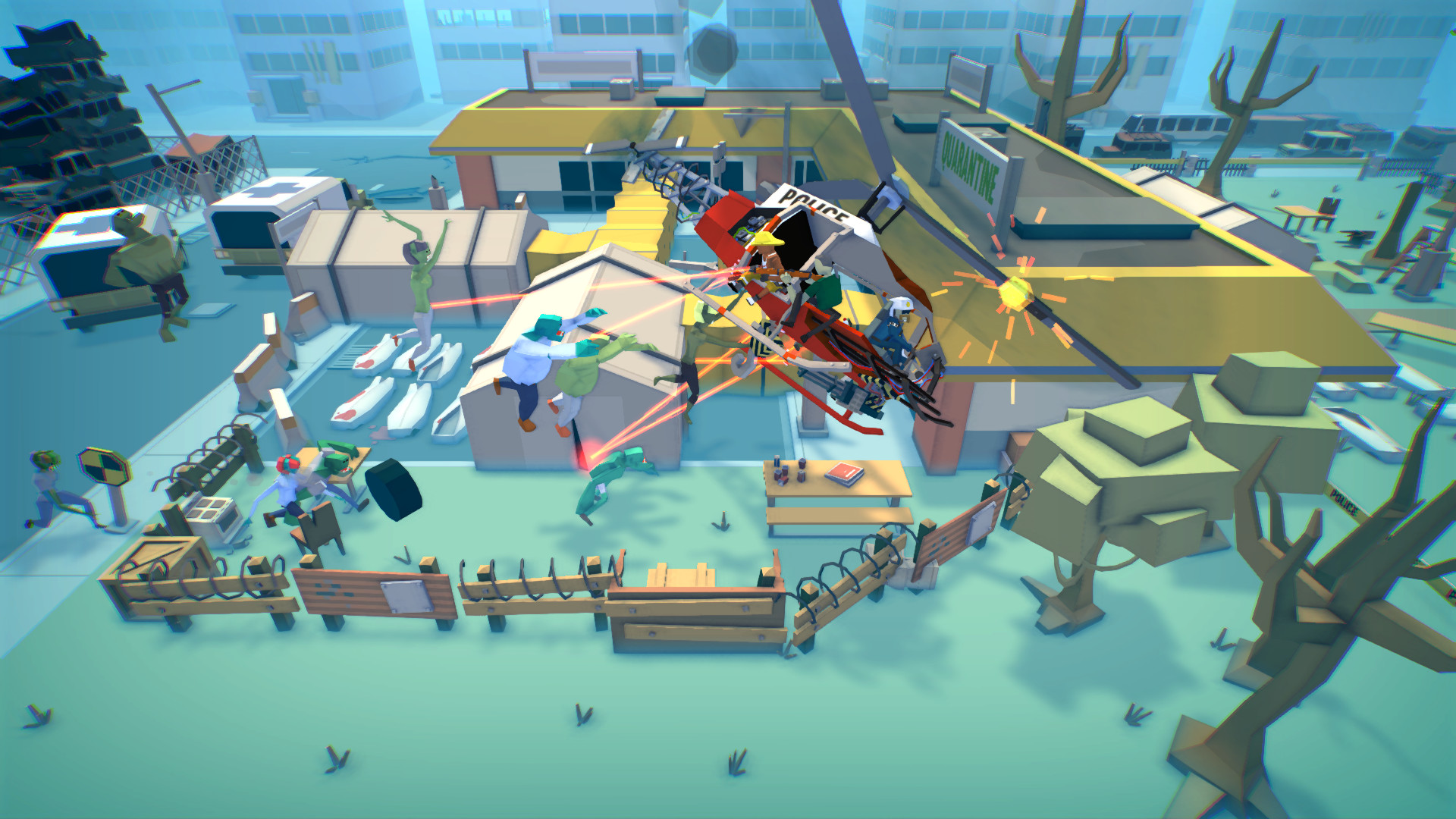 Players will also be able to customise their choppers from picking up various items throughout the game. The chopper has a ton of customisation options, which can look like recycled parts from a police vehicle or a legit war chopper. The graphics of the Dustoff series have a very cartoony, blocky, Lego-like appearance, but this actually works well and is part of the game’s charm, very similar to the Minecraft games.

The hard rock music played through the majority of the game fits in perfectly with its style and personality. Another celebrity reference can be found in the first stage, with a guitarist wearing a top hat and jamming out in front of a church. This is referencing Slash’s iconic solo from the Guns N’ Roses’ music video “November Rain”, but without the actual tune likely due to copyright reasons.

Even for what seems like a very simple and straight forward game, there is a lot to enjoy in this. The easy to pick up and play gameplay and the thrill of gunning down zombies, rescuing survivors and discovering the Easter eggs, all while listening to rocking tunes, makes Dustoff Z a must try for any zombie survival horror fans and old school arcade enthusiasts. 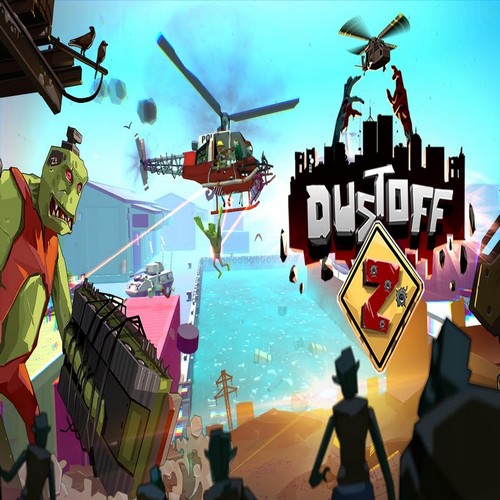 Get those blades spinning and load up on guns and ammo, the time has come to rebuild humanity! Dustoff Z is a game about maneuvering combat-helicopters in one of the harshest weather conditions possible – A Zombie Apocalypse.