To be crude, everyone loves free shite. Very often with a game that is as hard as Enter the Gungeon, anything given as a freebie, seems muchly welcomed to uplift those constant feelings of failure you are bound to experience. This top down, dodge and cover shooter developed by Dodge Roll and Digital Devolver, is a journey told with a spray of bullets as you mow your way through enemies in procedurally generated rooms. Much like Dark Souls it is very much a game you need to ‘Git Gud’ at.

Now, as it is an add-on, the actual story and gameplay is not at all that different to the original. This free update adds a plethora of things to the already, well-established inventory. The most exciting inclusions are 2 new playable characters and a new boss. The two new Gungeoneers added to the roster; ‘The Paradox’ and ‘The Gunslinger’, definitely add some spice to an already red-hot game. The Paradox is a mixed bag, beginning the rounds with randomised items and guns, while my favourite ‘The Gunslinger’ a cute revolver toting cowboy with passive which culminates synergies of all guns into the current.

The new boss aptly called ‘Agunim’ protects a new secret level called the R&G Department. The enemies in this level are unique to the update and do not appear in the logs of the Ammonomicon. As well as this the whole game is littered with new gear including 22 new guns, 14 new special items and multiple new perk like synergies. This update also patches certain items and weapons with buffs and nerfs. Many of the weapons have had ammo increases, damage and magazine size changes made to them to really balance the experience. Not only are items and firearms adjusted but DPS of bosses to take them down quicker and cosmetic things such as being able to finally pet the dog.

Overall, Enter the Gungeon- Farewell to Arms is a great update inventory wise, I just wished it added a few more overall types of enemies, and possibly one more level of goodness. In saying this, I’m not going to complain too much about something that is free, even while I am pulling my hair out in frustration. Update: Still trying to get good. 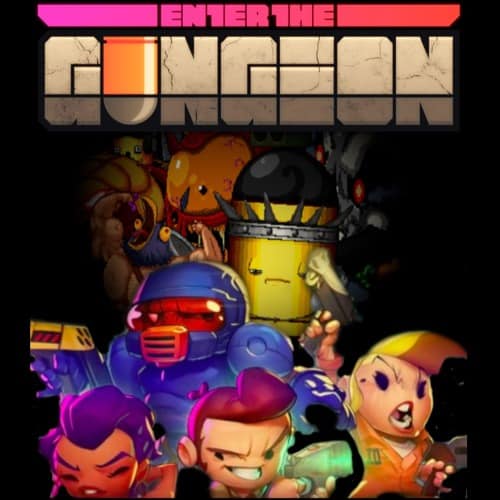