Having already released on PC and Playstation 4 on April 5th last year, developer Dodge Roll’s top down, arcade style shooter/dungeon crawler will be available to play on Xbox One exactly one year later and is also said to be releasing on Nintendo Switch at a later date. Offering a two-player co-op mode, this game is dumb fun that you and a friend could easily get several hours of fun out of.

The story is this; you choose from one of four adventurers in a quest to find a treasure that is hidden deep within a very secure fortress. The fort itself was destroyed long ago and then rebuilt to ensure maximum security, and as such it is riddled with a variety of different enemies from gun wielding bullets to ghosts and wizards and anything in between, topped off with some rather interesting bosses. The treasure lying at the belly of this fortress is a weapon; a gun. Not just any gun mind you, but rather a gun with the power to kill the past itself. Each of the protagonists you can choose from have their own back stories and thus their own reasons for wanting to acquire this legendary weapon and destroy their pasts and seek retribution. The game itself is very basic. It’s said to have taken influence from various titles such as Dark Souls and The Binding of Isaac, and after playing for a short while it’s easy to see why. You’re dropped into a procedurally generated dungeon style map sporting the all-too-familiar Unity engine and basically told to shoot everything that moves as you clear room after room, gradually progressing towards the next boss battle granting passage to the next floor of the fortress, collecting items and power-ups along the way.

Enter The Gungeon has relatively simple controls with one analogue stick doing all the aiming and the other controlling your movement, which is the standard configuration for almost every game of this genre. Paired with this is the ability to make your character dive, allowing you to clear small obstacles and granting brief immunity to damage which is a god send during boss fights. You’re also able to roll explosive barrels across a room or even flip over and push tables as interactive cover, which feels surprisingly organic and pretty early on you’ll find yourself doing it quite often without a second thought to good effect. Being a procedurally generated game world means every play through, though somewhat similar, is also a little bit different because the rooms and pathways you take spawn differently. This game also features perma-death where dying once means restarting the entire game, a feature that is vaguely reminiscent of truly old school arcade games or newer ones like the side scroller Volgarr The Viking.

Unfortunately, that’s about where the sense of originality ends. With this arcade style of video game to stand out you really should strive to do something outstanding or quite different to really stand out, else you run the risk of being ‘just another dungeon crawler’. And when you read between the lines that’s basically what this is. This isn’t necessarily a bad thing, but isn’t great either. It sits right at that happy medium of being ‘okay’. Obviously, the guys who made this weren’t going for ‘game of the year’ and as such the game itself is fairly priced meaning you’ll plenty of bang for your buck. This game does tend to cater for a target audience, that being the type of gamer who can quite happily play a repetitive type game and finds more challenge in pushing themselves rather than playing a challenging game that kinda does the ‘pushing’ for them. Simply put, this game is great for speed runs. It’s rewarding to those that play over and over perfecting its simple techniques and punishing to those who make even the slightest mistakes. At the end of the day I definitely had fun playing Enter The Gungeon and do feel like players will get their money’s worth granted most games nowadays require additional expenses to get the full experience a game has to offer Arcade games on the other hand are so black and white it’s easy to tell if you’re being ripped off or if the game is worth your time. Gungeon boasts having over 200 weapons to choose from that spawn randomly from what I could gather. During my personal play though I came across an AK47, a witch revolver that had a chance to turn killed enemies into chickens and even found a t-shirt canon that fired Gungeon Merchandise, much like something you’d expect to find at a rock concert.

To give a rough estimate I dare say that with the wacky and bizarre setting and weapons and very re-playable levels, to the average gamer you can expect to get a solid 10 to 15 hours of gameplay out of this game, maybe more with a friend. That being said, if you’re not okay with repetitive gameplay or retro grade graphics you may very well put the controller back down mere moments after picking it up. 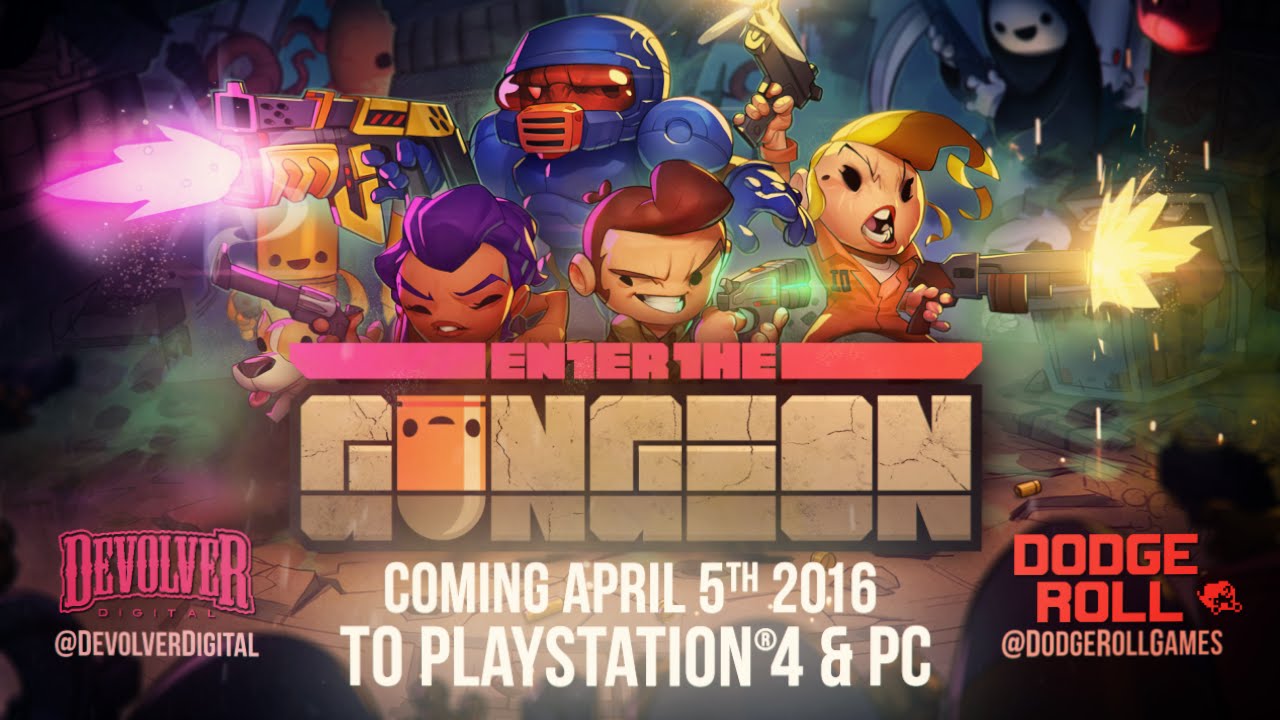