Fair Tail is a popular Manga and Anime series, and now a very cool game that has been developed by GUST Studios and Published by Koei Tecmo. Fairy Tail is a turn-based RPG that begins from the Seven Year Gap Arc, through to the Grand Magic Games Arc, and concludes after the Tartaros Arc. This is the first Fairy Tail game to be released on console, though there are other Fairy Tail games ranging from mobile games, Nintendo DS and PSP. However, this latest game is one I am extremely excited for, and to make it even better Hiro Mashima, the author of Fairy Tail, was a part of the development to make sure it stayed true to the original source.

Anyone who is a fan of Fairy Tail will know the story of the game, but for those unfamiliar I will try and sum it up without going full fanboy and writing three pages worth of lore. The Game follows a Guild of Wizards known as Fairy Tail, once the strongest guild in the Kingdom of Fiore. Where the game starts off however, is the end of the Tenrou Island Arc where you have a tutorial battle against Precht, one of the founding members of Fairy Tail, who now goes by Hades and is the master of Grimoire Heart, a dark guild that was after Zeref the Dark Wizard.

He instead lures out Acnologia, the Dragon King, who attacks the island forcing the Fairy Tail Guild to combine their magic and cast one of the Fairy magics to put up a powerful barrier, to protecting them and the island from being destroyed. In doing so however, leaves them trapped in suspended animation for seven years. This is where our story begins as they are awoken and return to find that their guild has lost their original home, the Guild Hall, and is now the weakest guild in Fiore. 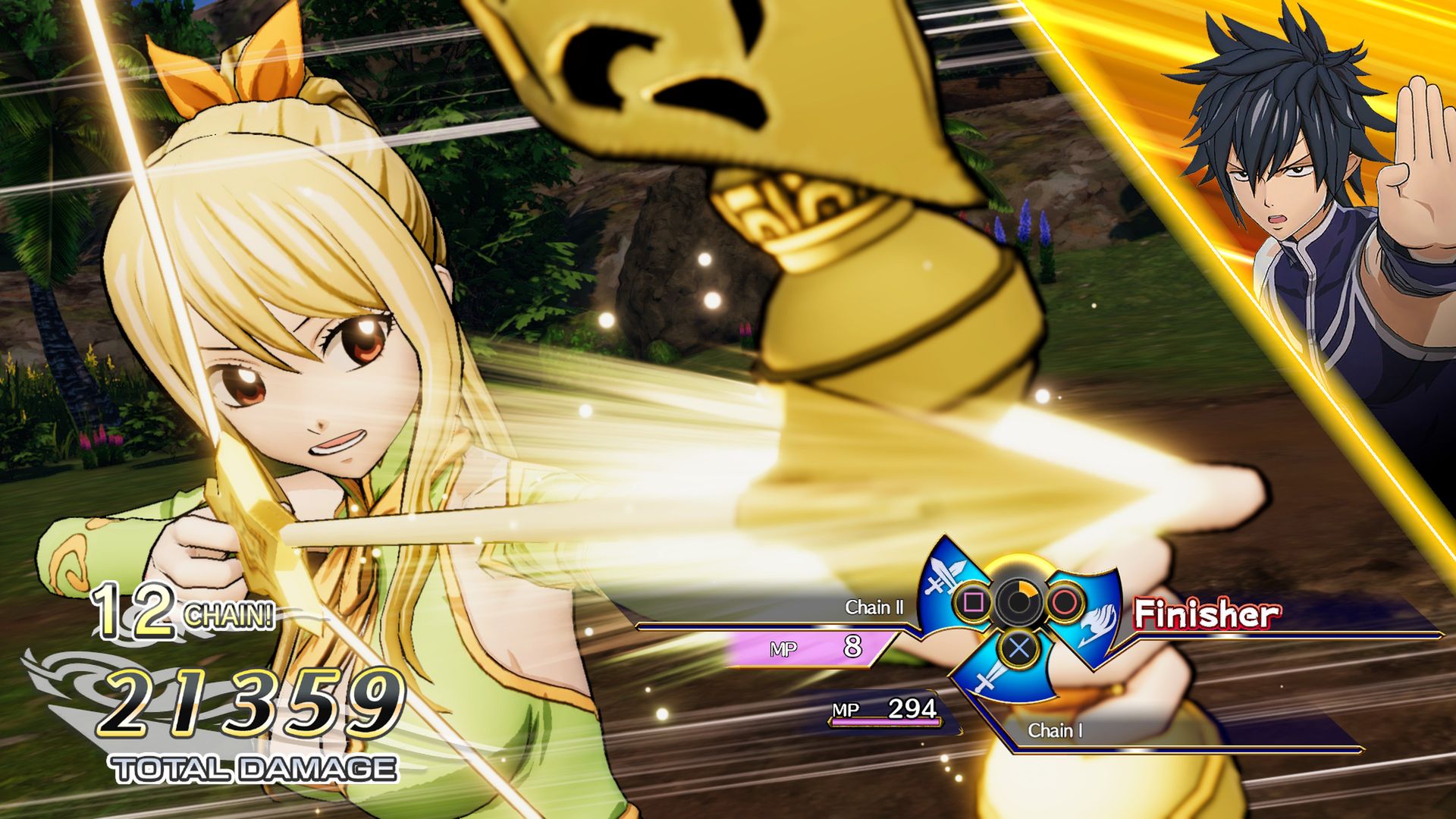 Starting the game, you find yourself at the new guild hall, reunited with the remnants of Fairy Tail, and starting off with 2 of the 16 playable characters, Natsu and Lucy. As you progress through the game you will unlock more of the characters, while also gaining access to the Guild Ledger. Here you can raise the character’s star level, upgrade guild facilities, and check the guilds current ranking. Further progression will unlock the guild shop, laboratory, and request board.

The guild shop, as the name suggests, allows you to purchase items, while the laboratory lets you create lacrima, an equipable item for your characters that grants them bonuses. The request board offers jobs to complete, rewarding you with jewels and renown to increase guild rank, with the jobs on the board reflectling your guilds current rank, starting at rank D, through to A, then finally S class. Eventually you will have access to other guild facilities that give passive bonuses.

The combat, which I have to say is probably my favourite part of this game, is reminiscent of games like Final Fantasy 12 crossed with Tactics. You will run through areas where monsters and enemies also roam, where running into, or being run into, will start combat. If you’re quick on the trigger, you can press square to hit the enemy before combat starts to gain a speed bonus. Once combat has started, the enemies will appear in one of nine squares and your party will be in a single row. Your battle options are square for non-elemental physical hit, triangle for items, circle to defend and X for magic. You will unlock more magic as your characters level, but by far the best thing I have seen in this game is one of Lucy’s magic attacks; her basic one, Lucy Kick. For those who know Fairy Tail will know this attack and the fact that it is in this game made me so happy. 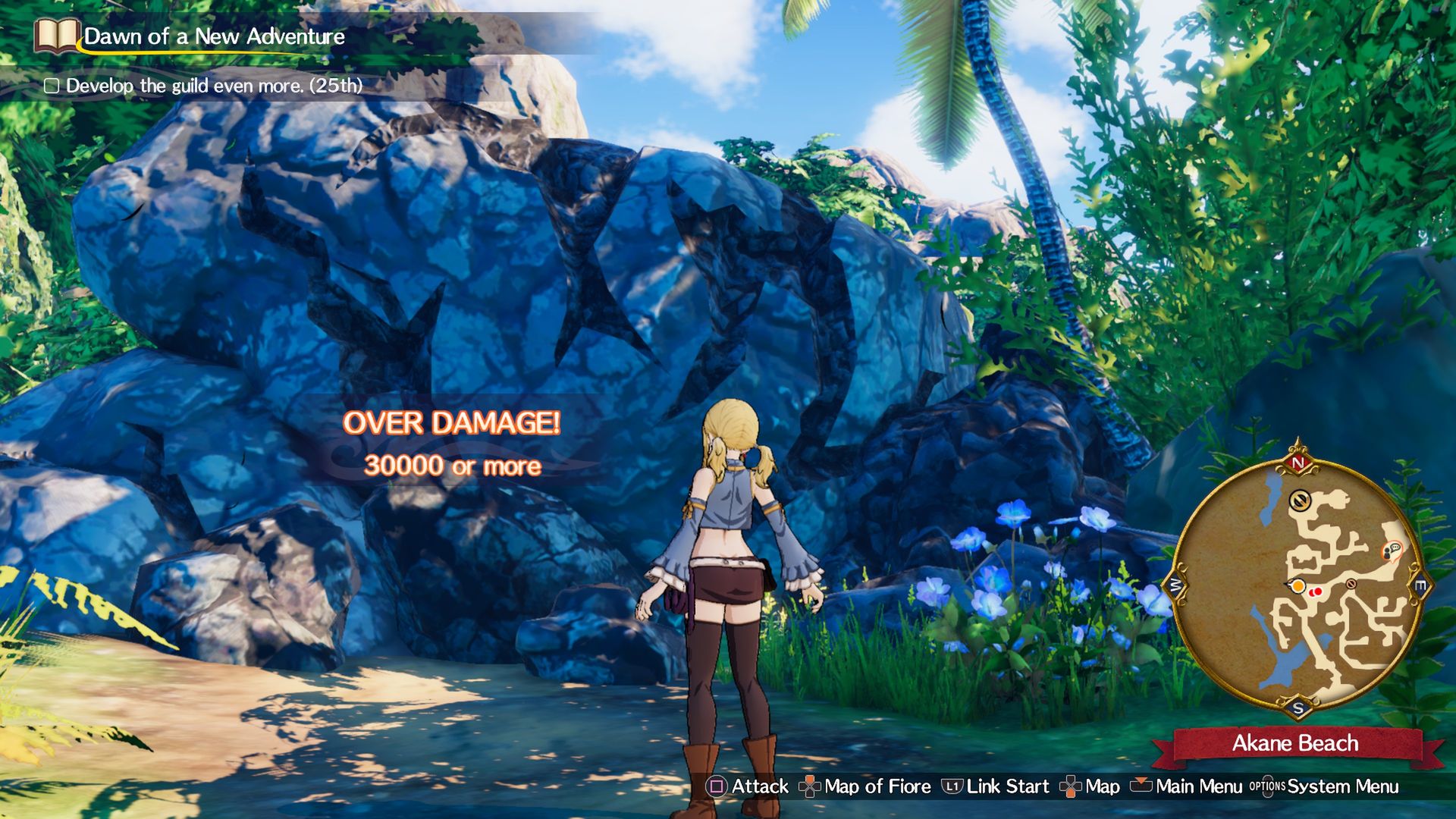 For those who do not know what Lucy Kick is, it is exactly what it sounds like. Lucy just runs up to an enemy and drop kicks them while yelling “Lucy Kick! It made me so happy I almost cried. Each character’s magic has different area of effects; some will hit a single target, and others will damage an entire row. This adds a little more strategy to fights which I enjoy.

You can use L1 to escape from battle, or R1 to unleash a combo attack and finisher that improve as you complete missions that strengthen the bonds between your characters, and as you progress you will gain access to powerful finishers. After meeting with Jellal, you will gain the awaking ability that strengthen your characters, or you can use part of your awaking gauge to assist other characters if you wish to. Or you can be like me and just have Lucy dropkick everything.

The music in this game is perfect because it is all Fairy Tail styled. As an added bonus you can even go into the in game menus and listen to music you have collected. The voice acting is all in Japanese, so if you are the type that hates subbed anime then you are out of luck. I have not been able to find if the voice actors are the same as the anime, but it does sound like it – just do not quote me on it. I do kind of wish they did an English version, purely because there are instances where the characters speak but because it’s not part of the story, and therefore it is not subtitled in. I just want to know what they are saying! Visually, the world is surprisingly beautiful. 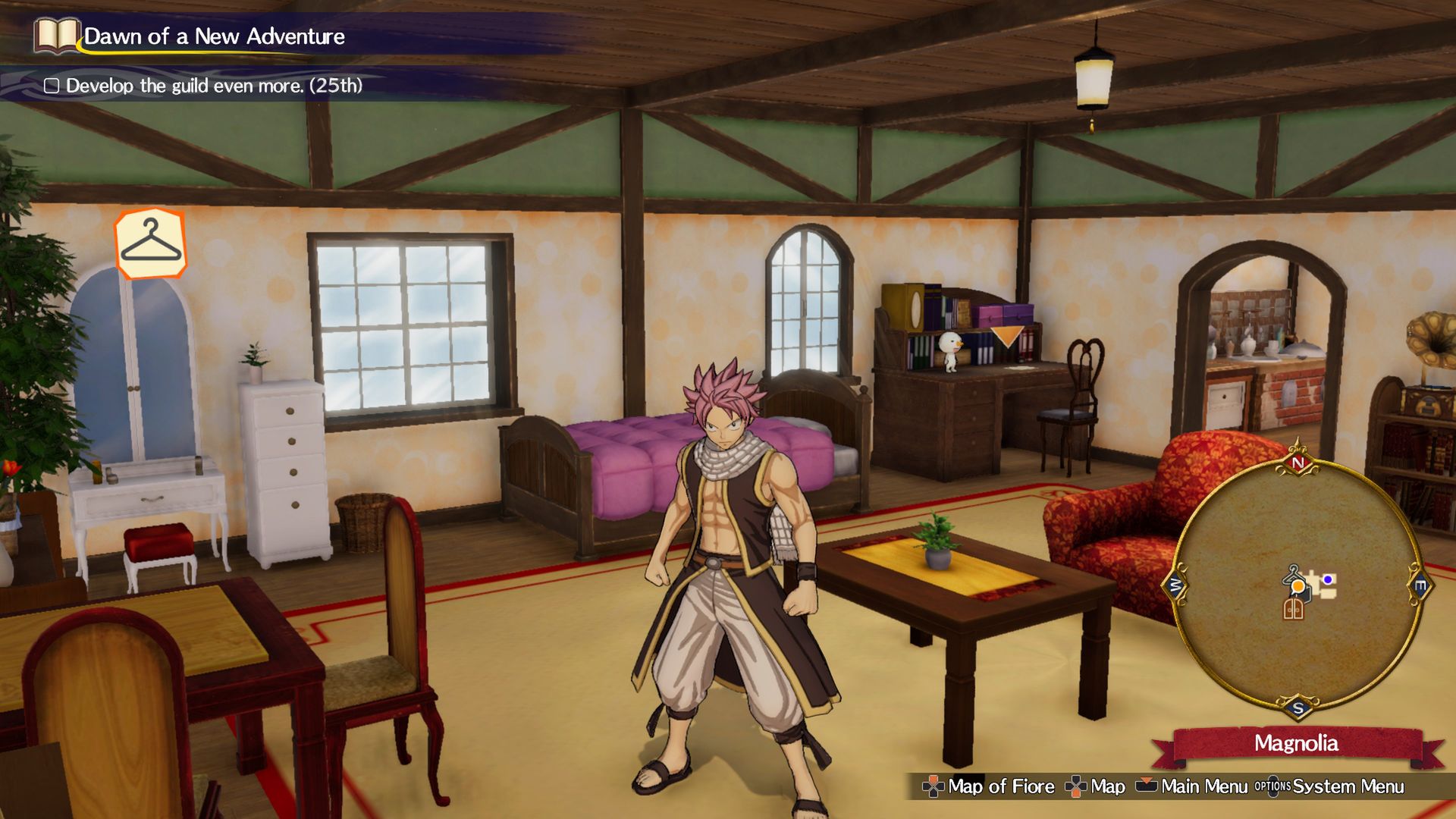 The backgrounds art style is great, evening featuring small details like leaves blowing in the wind, or dust being kicked up and blown about. It was more detailed then I was expecting, and coupled with the amazing Fairy Tail music, the weeb in me just cannot help but get excited. Following with the anime themes, the characters and enemies are cartoonish, but they do feel a little stiff, but it’s rare that they feel a little out of place against the visuals of the world. If you have played other anime styled games, you will probably understand what I’m trying to say.

I was a little disappointed by the lack of attention given to characters. You would see their face in a text box, but never as an actual character model. This is especially more obvious when you reach the grand magic games. There is meant to be 8 teams of 5 but you only see one or two of the members. A nice touch to the game however is Lucy’s house, where you can change outfits of your characters as you unlock them, as well as a bookshelf that holds a lot of lore regarding the Fairy Tail world and its characters, with more entries being added when you discover new people and locations.

I was looking forward to this game, and it exceeded my expectations, especially seeing as most of the anime games I have played never really hit the mark. Fairy Tail is a fun and well paced game that I would recommend to fans and younger gamers. 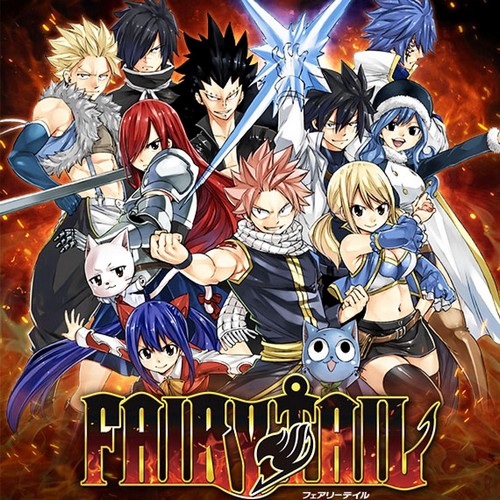 A game based on the popular "FAIRY TAIL" is available on Steam for the first time!