Published and developed by Awesome Game Studio in Poland, Fury Unleashed is an action packed 2D platform shooter presented in a comic book style. The simple yet intriguing plot tells the story of a struggling comic book creator, John Kowalski as he deals with pressure of online critics and poor sales, expressing his frustration in his work. Players take control of the main hero (unnamed) and battle their way through all the chaos in the comic book titled Fury Unleashed.

Players will only get one life throughout their entire playthrough, meaning any weapons and items collected along the way will be lost and the player will have to start from the beginning in the event of an untimely demise. To make things more interesting, the levels and enemies are randomised with each playthrough making it feel like a brand new adventure with each attempt. The game utilises the twin-stick shooter control mechanic, by using the left stick to move around the hero and the right stick to aim and shoot whichever direction it is held in. The hero can also perform melee attacks in close range or throw grenades, as well as jump and dash to traverse each comic panel. 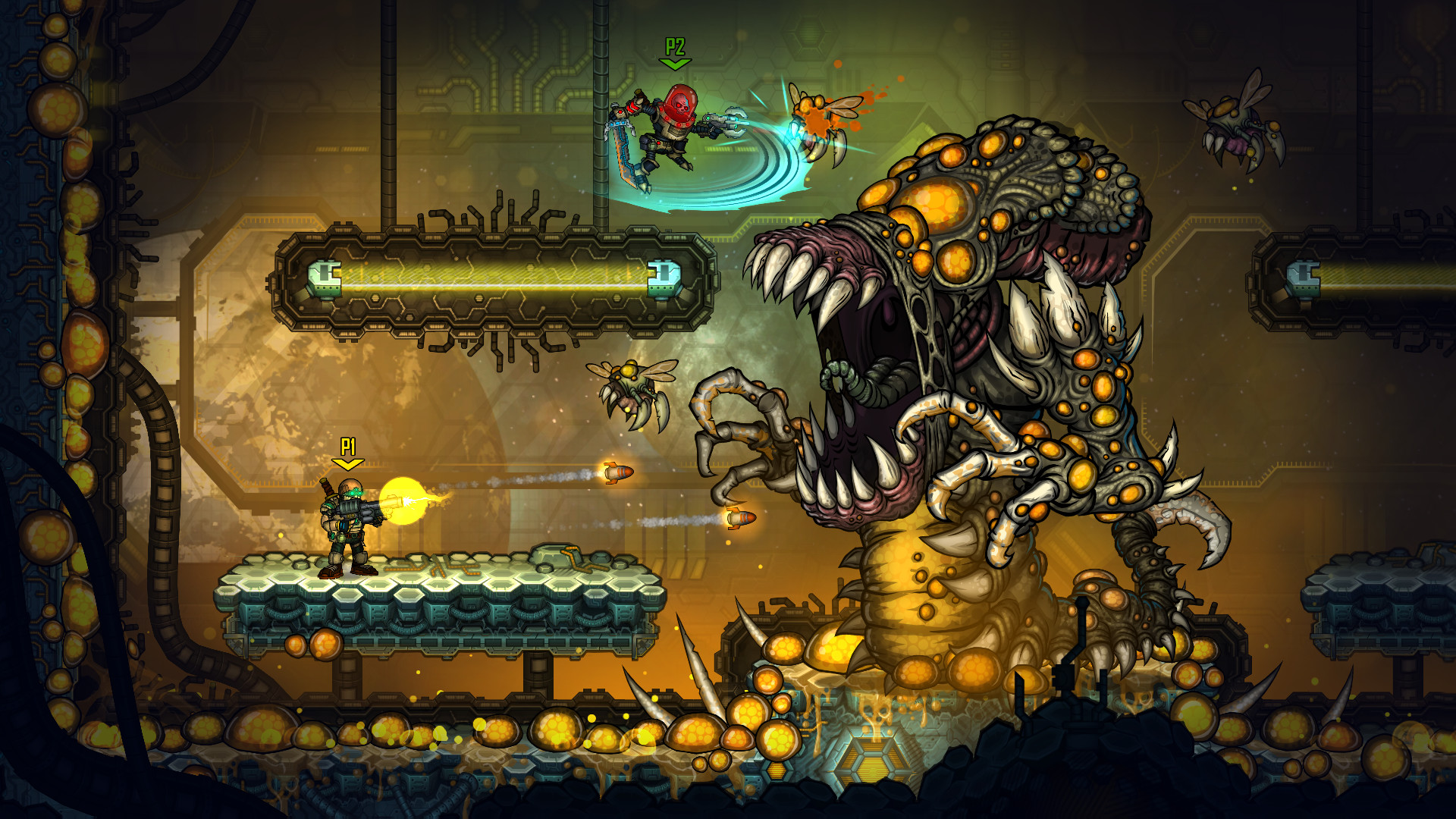 The overall gameplay is fast and action packed, with lots happening on the screen at any given moment, which amazingly, has no effect on the game’s frame rate. 2 Player Mode is also available to double the fun and double the mayhem.

As players progress through the game, more of the story is unveiled via text messages and social media posts displayed on screen which surprisingly illustrates a lot of emotional weight. Even though the gameplay is the main appeal of Fury Unleashed, its story, as simple as it is, is actually really well done. While paying attention to the story isn’t necessary to complete the game, it can still take players on a real emotional journey as they unveil more of John Kowalski’s constant mental battle dealing with harsh critics online and trying to please the consumer.

The game’s graphics have a very western comic book art style and cartoony vibe with bright colours, yet filled with gritty violence. Each area is its own panel in the pages of the latest Fury Unleashed comic book. Fast travel is available allowing players to skip ahead if they want to backtrack and take a different path without dealing with the enemies on the way. Players will want to go through each panel as killing each enemy adds to their kill combo, which brings out more ink to collect from the dead enemies. Ink is used to boost stats between stages which will aid them for the bigger threats ahead. 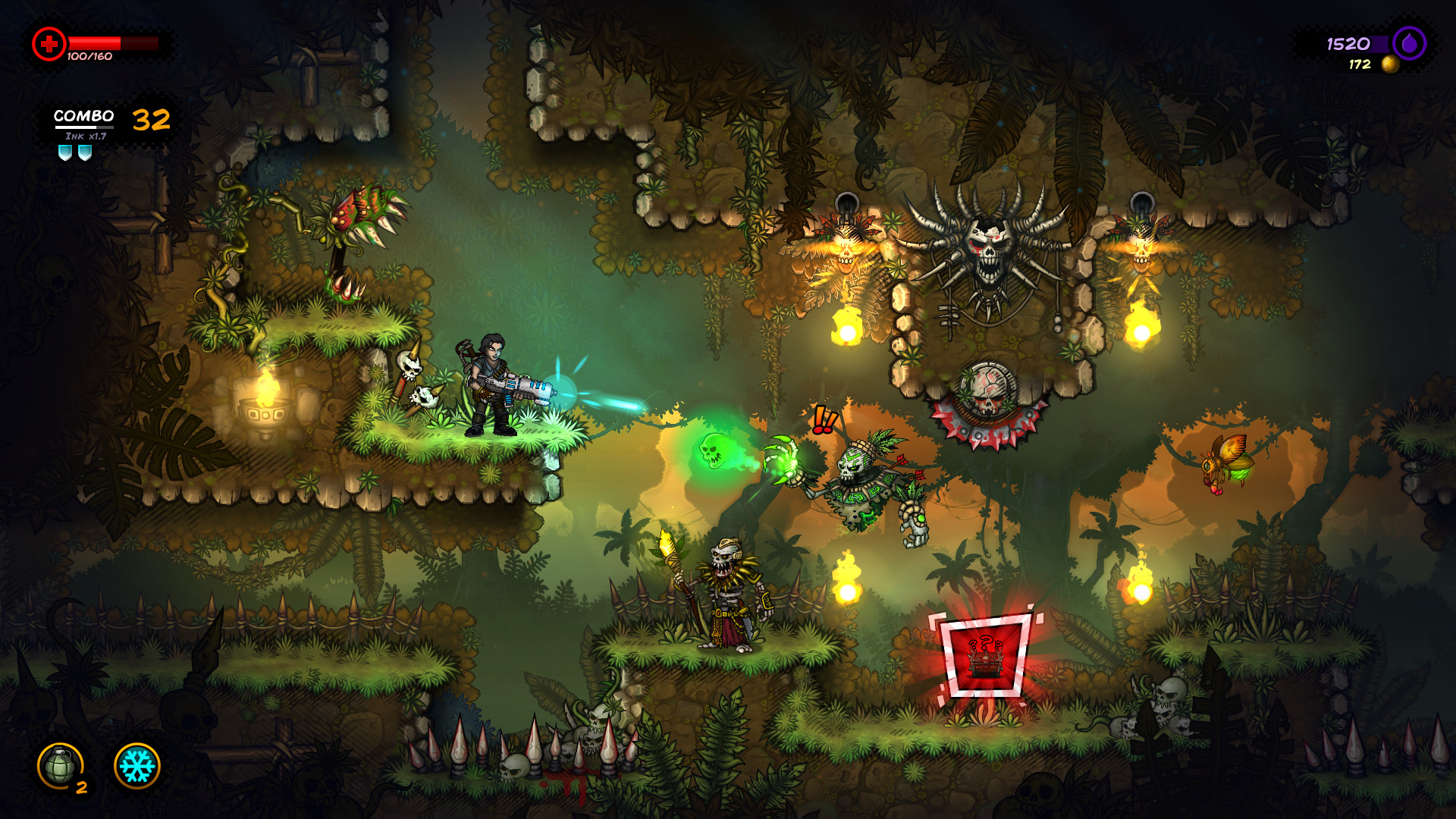 Several various weapons can be attained and swapped throughout the adventure, each with their own abilities and pros and cons, and each player will be able to find a weapon that they feel most comfortable with. A total of 40 unique bosses await the hero, each with their own conditions in taking them down to progress to the next stage, and since the levels are randomised with each playthrough, players will never know which boss is waiting for them in the next comic panel.

The sounds of guns firing, explosions, enemy dismemberments and more fit the action packed and gory gameplay perfectly. The background music really compliments the gameplay and the jungle atmosphere in the comic. As players build up their kill combo, the pace of the music actually increases adding to the excitement of the intense action on screen. The appearance of the hero can also be changed from the typical action hero, to a skeleton, a Cthulhu looking creature, a furry and more. Although the different hero appearances play exactly the same, it’s still nice for players to have options for who they want to play as.

While it may look like a simple generic indie game at first glance, actually playing it feels incredibly satisfying. The simple yet fun gameplay, complimented with simple yet deep story that carries a lot of emotional weight, help make Fury Unleashed a unique action packed adventure with tons of replay value. 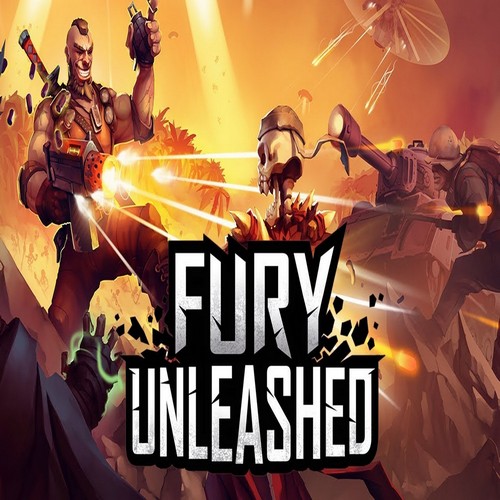 Fury Unleashed is a combo-driven roguelite action platformer - each kill you score increases your combo. Hit certain thresholds and your damage resistance and healing powers will kick in! It's a game you can even beat in one, ultimate combo. Are you up for the task?