Nintendo has a rich history of doing things their way and actively strives to use its platform to better the human race. Through the years we have seen Brain Training for DS to help break a mental sweat, Wii Fit to break a physical sweat, and Wii Sports and Dance games to make you vigorously flail about! Even a few editions of Art Academy were released to help nurture your creative desires and all of these games did so under the guise of learning through the power of fun! So, after many years of making these games for us to grow and learn, they have finally decided to make us do it ourselves with Game Builder Garage.

The title screen sets the tone immediately with a vibrant yellow backdrop populated with a slew of happy little pixel art Nodons. What’s a Nodon you say? A Nodon is the foundation of everything that makes your soon-to-be-created worlds tick. The raw code of 1’s and 0’s that makes a game was a little too daunting to tackle, so Nintendo made preset nodes that will dictate everything from player movements, right the way through to art style and music. The idea is meant to be accessible to a much younger audience, while still being engaging and challenging for older audiences as well. Cute little blocks are clear and direct to represent what actions can be used for when programming.

As a quick example, a player Nodon will generate a character on screen, but it will simply stand still until you attach a thumbstick Nodon to the X or Y axis of the character. Now the character will be able to move in the designated direction with the assigned thumbstick. Do you want your character to be able to jump? Use a button Nodon and attach it to the character Nodon’s jump feature to activate it, then edit the button Nodons to whichever button on the Switch you want to trigger it. 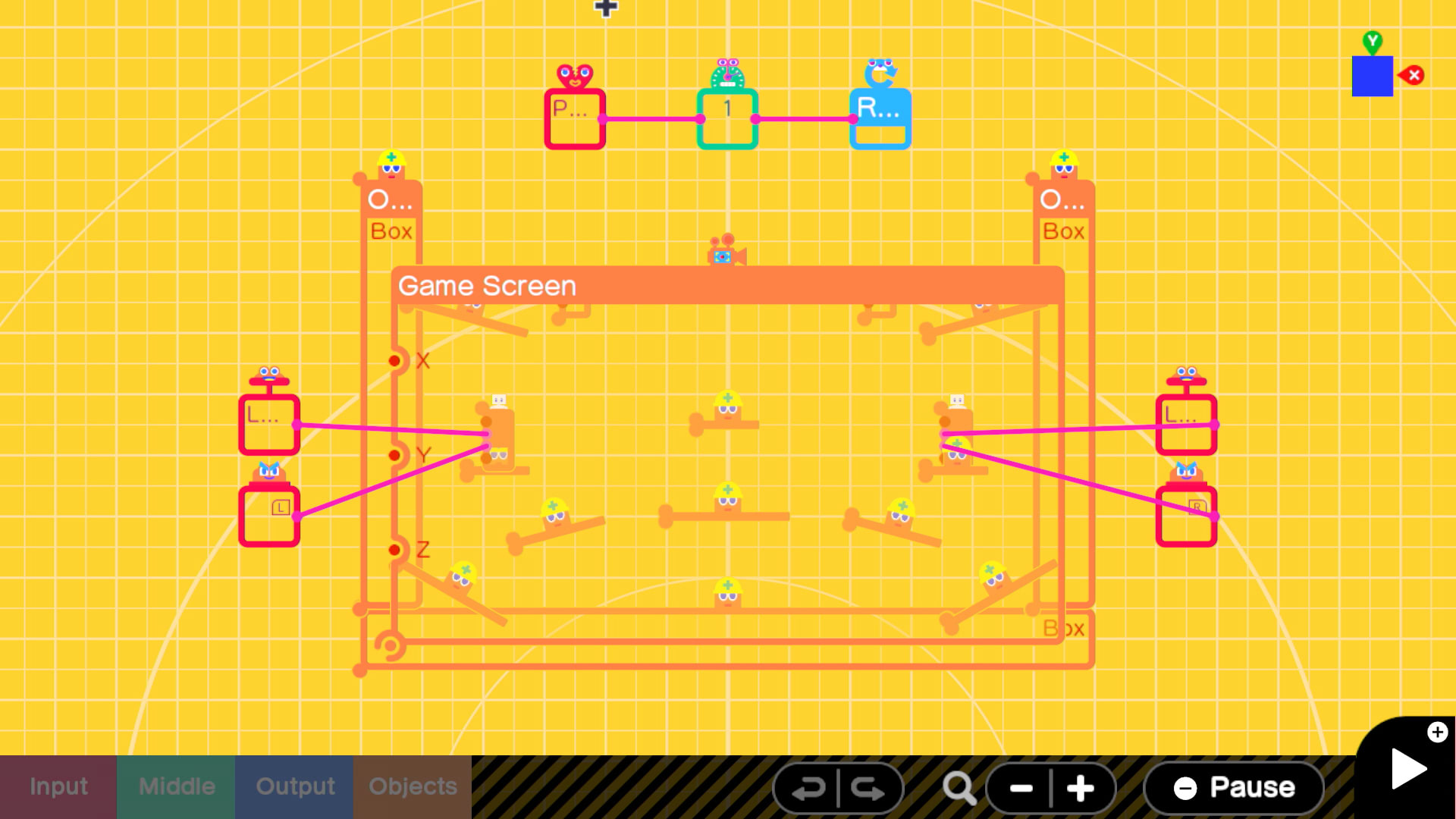 Fortunately, Game Builder Garage is one of the most friendly approaches to game design ever conceived. While docked, you can navigate with the controller or you have the ability to plug in a USB mouse. In handheld mode, you can use the thumbsticks or the touch screen to move objects around at will. Two guides, namely Bob and Alice, are introduced upon starting your first lesson. They will hold your hand and show you the ropes, And boy, do they have a vice-like grip.

Seriously, I am greatly appreciative that these lessons were thoroughly explored, but it was a little irritating that I could see the answer they wanted me to present and the game would not let me demonstrate it until they had cycled through the dialogue.

Seven preset games will teach you different concepts of games, from 2D side scrollers, motion-controlled puzzles, and even vehicle games. Each lesson will slowly introduce you to each Nodon which all have their own nicknames and sprite to give them a bit of character and potentially make them more memorable. There are two distinct sections when it came to programming, one being the planning screen and the other being the playing field.

The planning screen is a giant blank canvas of grid paper that you would find on a basic blueprint. It is here that you hide your coding as you make a safe and playable environment, before using the plus button to switch to the playfield to see everything in action. 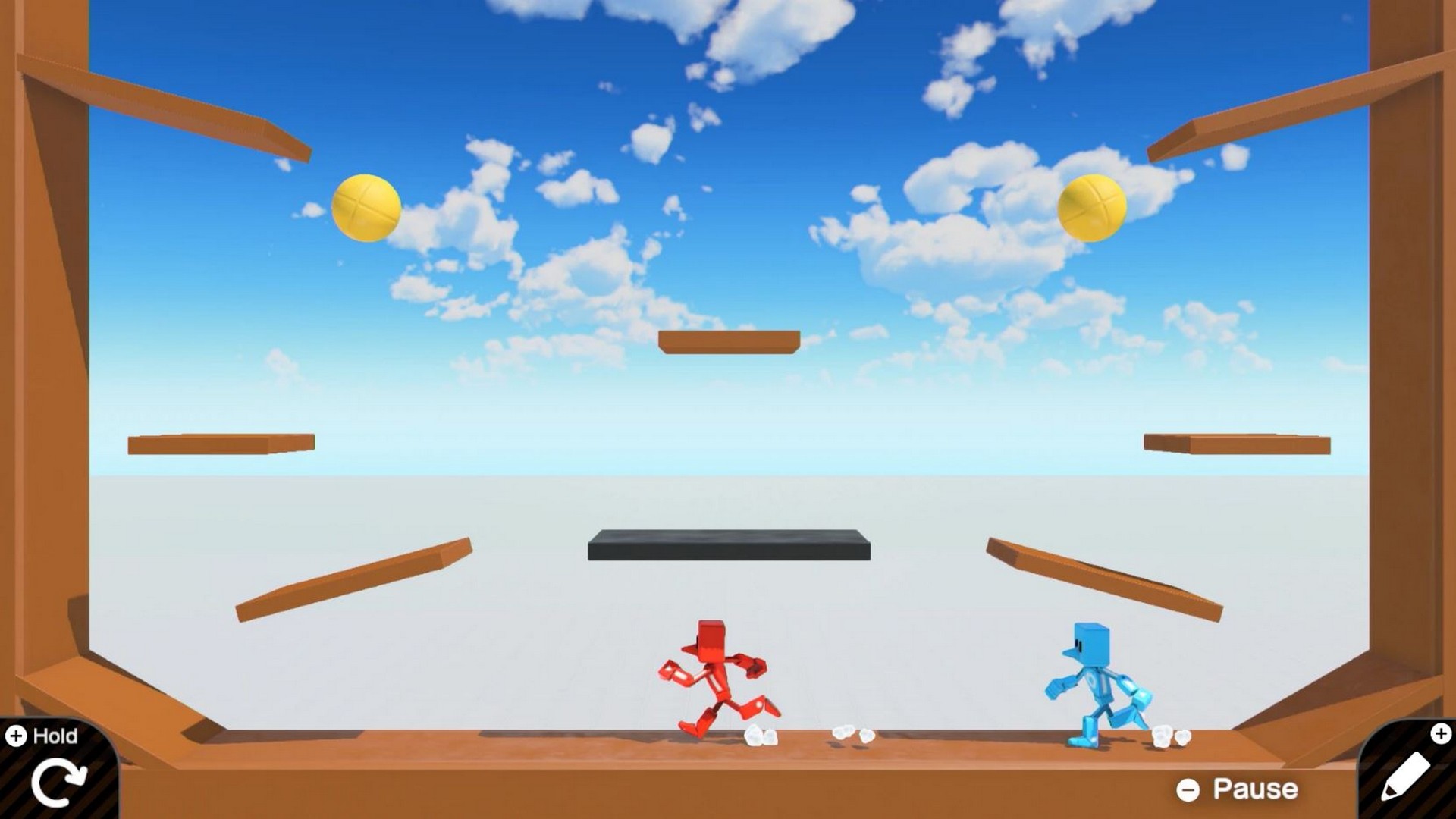 One of the best things about this process is that any block or character you place is already a pre-rendered 3D model. You can edit the pre-existing model’s colour, or you can delve into the rather intricate pixel art to create your own image that can be layered on top. As a baseline, the graphics are polished and functional with the textures being able to reflect from the customisable light sources. A small pallet of colours can be applied to everything you create, and it was easy to make a fun little project pop with colour. Without much work on your part, each game world you create can look like a finished product, and it can only get better with practice.

Once you have worked through the interactive levels you can access the free programming section of the game, putting everything you have learned into practice. I wouldn’t say that there is inherently a story to the game, but I did miss the Nodons all encouraging me and cracking jokes to a collection of Chiptune music during my lessons. Opening the free programming portion of the game felt intimidating, so I quickly busted out a background music Nodon and set to work on tuning an exciting melody. Having access to over 160 different combinations of premade musical loops of guitars, synth weave, drums, bass lines, or piano, I could easily create almost any kind of theme imaginable.

The idea of making games seemed like a dream come true at one stage until I finally realised just how much work goes into this dream. After 14 hours I felt like I had only just scratched the surface, and it feels like a gateway into an actual programming course. I wish there was an easier way to share my creations or download other people’s work, like Miitopia. I have had to search for a community outside the game itself to find codes to download other people’s work, so I can open up their coding and learn even more ways to manipulate the tools Nintendo has created. 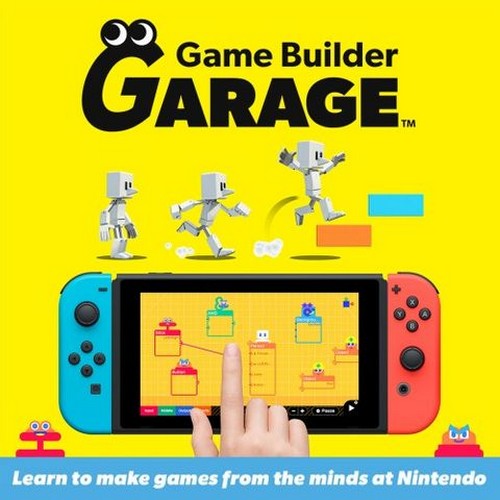 Have you ever dreamed of building your own video games? The Game Builder Garage™ software is a great place to start! Anyone can learn the basics of game design and visual programming with step-by-step lessons.