Ever wondered what would happen if you replaced ‘Samus’ from the ‘Metroid’ series with a cat? And say this cat had access to an impressive arsenal of giant robotic mech suits and weaponry, whilst roaming an isolate space planet?

Sounds insane, yet awesome, right?! Well, Devolver Digital, the studio that has brought us such classic Indie games such as ‘Gods Will Be Watching’, ‘Hotline Miami 2: Wrong Number’ & ‘Broforce’ have decided such an idea should be a reality and thus comes their new release, ‘Gato Roboto’.

Gato Roboto is set in a futuristic world. A space commander sends a message to his command, stating a nearby planet is sending out a distress signal. The command team state it’s an old factory that has been abandoned for some time. The commander wishes to investigate anyway, and shortly after being granted permission to do so, his cat jumps up onto the computer console, sending the ship crashing into the nearby factory-hosting planet. Upon arrival, the commander is pinned/trapped inside his crashed ship. However, his cat “Kiki” cleanly springs out of the ship, landing on the desolate planet. Communicating to Kiki via a communication collar, the commander urges the feline to go on and find a nearby mech suit, used by engineers on the planet. After traversing through some narrow entry points and tight confines, you find the mech suit and suit up for action!

As you retrace your steps to the commander, you begin to discover that all is not what it appears to be on the planet. Maybe the distress call is real, and that the planet is hosting more secrets than meets the eye…

Gato Roboto is an Action / Adventure game. Much of the gameplay takes place on the mysterious planet, through an underground labyrinth of various tricks and challenging platforms to navigate around. Your overall task is to track down the source of the distress call, but along your way, you encounter other creatures. Most want to harm you, some want to help you. Some may have even formerly been human and have been turned into an animal (your encounter a mouse that can talk. Weird, but wonderful!) The other portion of the game majority of the time has your travelling around in a mech suit. Along the way to the distress beacon, you’ll be finding upgrades and new weapons for your mech suit. These can range from new weapons (like a rocket launcher), boost for your jump, to suit health increases. During this time, you can hope in and out of your suit, allowing you to better reach the requested area/item as the cat or the suit, both of which add-on to the impeccable and easy to pick up and play gameplay.

Climbing on walls has been alternated too, much to the pleasing of gamers. Originally, climbing walls and pressing the Z key would make the cat spring off into another section of the map, hopefully, another nearby wall. However, bad timing and aiming result in many frustrating moments. Now, when rushing towards a wall and pressing Z, Kiki will latch onto the wall, allowing for smoother maneuverability.

The arrow keys are now used to help to control your feline hero (originally WASD keys). Upon entering the mech suit, allowing with the previously mentioned movement keys, you add X, C, and V which become your firsthand lot of handy offensive style buttons, to which you’ll come to love and mash in no time! Throw in the Z key to jump around and you’re ready to explore space!

A new FULL RELEASE feature is the Enter key, which is now a shortcut for the pause button. Pressing this will send you by default to the map, showing you where you have been and what areas are left for you to discover. This adds immensely to the game, giving you a further (and literal) sense of direction.

Other new features include showing your mech-suit and what options you have left to unlock. Rounding out the menus is the Settings. Here you can go full screen, adjust the sound to your audible acceptance and adjust the ‘palette’, which is how dark the black colours in the game look. Possibly sharing a similar art style (and love) from the famed Undertale series, the majority of Gato Roboto is done in a black and white pixel format. Although many indie games prefer to be hand drawn with art rendered background and heavy in-depth background detail, the black and white format doesn’t hinder the game at all. It’s almost a throwback to the Atari / DOS style games that allow the graphics to be maintained, thus letting you focus on the tasks/challenges ahead.

With the majority of the NPCs talking in gibberish (similar to that made famous in Banjo Kazooie), the audio is comedic. But one can’t help but wonder if a heavy detailed / heavier impact of a soundtrack would help to complement the game. The eerie background tune does its job by making you feel isolated in space, but there aren’t any memorable songs that strike out at you whilst playing.

A new feature in the graphics department is the previously mentioned ‘palette’ option in settings. This hidden gem can change the colour scheme throughout the game. Being devised by a two-colour palette, the combos that are provided (further palette choices can be found and unlocked in-game) are really clever and add a new visual take on the game.

Gato Roboto is a fun, alternate spin on the Action Adventure game style. The idea of a cat running rampant on a space planet in a mech suit is simply hilarious, and Devolver Digital have done an impressive job on bringing this wild and imaginative story to life! 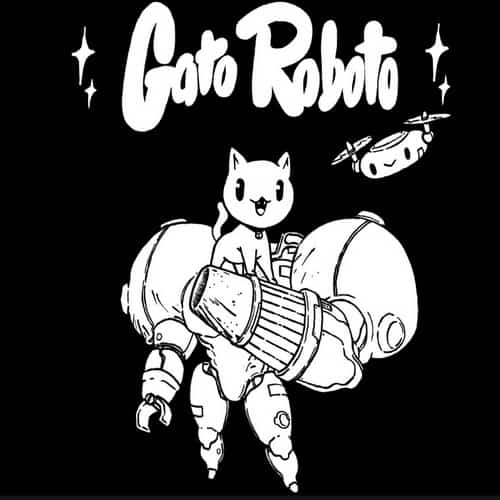 Pounce inside of your cozy armored mech and set off on a dangerous trek through an alien underworld full of irritable creatures and treacherous obstacles in a valiant effort to save your stranded captain and his crashed spaceship.