After my last review on the newly released indie game ‘Katana ZERO’, I mentioned how much I enjoy indie games that have a lot of passion and excitement behind them. How you can tell the team behind the upcoming creation is full to the brim of nervous, yet excited, energy to share their game with the world.

Sick Chicken Studios are one such team that you can tell have put their heart and soul into the upcoming release, Guard Duty. But is it enough?
Without further delay, lets dive in.

STORY
Guard Duty is set in the mystical kingdom of Wrinklewood. You play as a bumbling, drunk guard of the king, Tondbert. You awaken after a night on the drink, naked and locked in your own quarters. After point-and-clicking everything in sight, you manage to clamber out down through the window and into the eye of the public below, whom are shocked at your underwear based appearance. Much to the enjoyment of your fellow guards, you’re tasked with finding your clothes before the story-line can even pick up!

Jump to a cut-scene with a hooded figure, who appears to have been looming around the castle the night before. As the princess is on set for the latest feature film production, the hooded man appears, freezing the rest of the cast and crew, allowing for him to easily capture and escape with the princess.

Back with Tondbert and, after some back and forth tasks (dashed with a few pop culture references here and there), you find your kit and are ready to brace the king. Your fellow guards decide it would be hilarious to deliver a note (which turns out to be the revelation of his missing daughter / the princess), you are hereby deemed the task of finding and returning her!
And this is only the beginning… GAMEPLAY + CONTROLS
Guard Duty gameplay / controls consists of your typical point-and-click style: Point & click anywhere on screen to move, click other characters / objects / items to interact with them. However, It’s quite broad in the sense that the in-game cursor doesn’t light up or make a chime or do anything on screen to signify what can / can’t be clicked. It’s this flaw that you will inevitably find yourself frantically clicking at anything on screen, just to get a reaction.

This is a very 90’s style point-and-click adventure throwback but it suffers in today’s modern times, as the idea of blindly clicking anything that by-god moves on screen runs the risk of removing you, as the player, from the overall narrative.

There’s also a bunch of collectible items that you will find yourself looting and carrying around during your random quests. Unfortunately, some of these seem to serve no rhyme or reason, as you aren’t notified properly when picking them up and vaguely told how to use them when required. GRAPHICS + SOUND
The artwork and overall design of Guard Duty arks back to the wonderful and nostalgic yester-year era of 90’s point and click adventures. Simplistic, yet added detail where needed. The colours are melded perfectly to incorporate the scene playing out before you, and all worlds (past and future) are accurately recreated to a tee.

The in-game dialogue, music & sound effects have all been originally produced & recorded by the team and Sick Chicken Studios, which just goes to show the level of detail they strive to put in their work.

Despite that, the dialogue does suffer in some parts. The volumes differ and distortion sometimes creeps in, making it hard to gain an interest in either the character speaking or the overall situation you are currently facing during the story.

CONCLUSION
Guard Duty is a lovely nod to the 90s point-and-click adventure games. It’s easy to pick up and play, and the story-line itself is intriguing, allowing for further replay value. 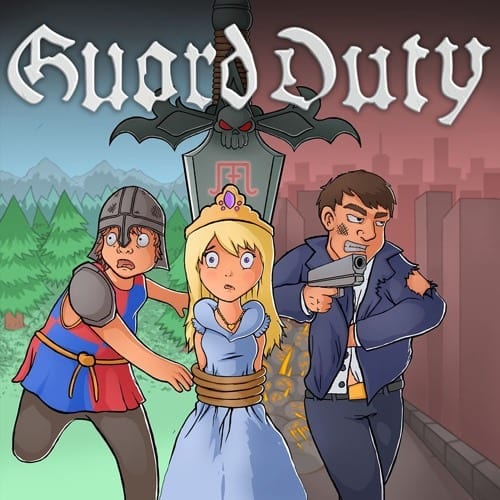 Guard Duty is a comedy adventure about love, loss and the end of the world. Experience an unforgettable story spanning across two radically different time periods.