A well-traveled looking woman stands in front of a mountain. The dusty plains whip sand around, blinding her vision. Still, she continues forward with her robotic sidekick following eagerly behind. After a brief climb, she exclaims: “We’ve made it”. The camera pans out to reveal a hut and a path further on. Upon closer examination of the surrounding area, a glyph behinds to glow, revealing a hidden language that has long since been forgotten… As the woman’s eyes widen, the camera cuts to black. What was that writing? Where are we? What did it say? Who is this woman? That robot looked cool!

STORY
You play as Aliya Elasra, a sarcastic yet driven archaeologist who is fascinated with discovering hidden and historical artifacts and reporting her findings back to the University, her place of work. You are summoned by your mentor to help track down a colleague and fellow scholar, Janniqi Renba. Whilst that task alone seems troublesome, sending you sailing to distant moons / plants via the mystical rainbow oxygen/water-esque paths of the galaxy, you are also tasked with decrypting the language of ‘Ancient’.

You are also dubbed with a guardian / side-kick named Six. His role initially is to keep watch over you, making sure that you don’t do anything drastic and stick to the plan. Eventually, Aliya & Six form a bond, as Aliya shows Six just what and how the world works, and how far back the history has helped to shape and change each moon in the system. GAMEPLAY + CONTROLS
Alot of Heavens Vault gameplay derives from the search and discover mission you’re on. Along the way, you can be offered alternate paths that will take you to some weird and wonderful destinations, either adding to or prolonging your inevitable mission. The main focus is, given your heroines profession, Archaeology.

Archaeology is presented in a side-mini game way. As you move around the moon you have docked your space ship (literally a wooden ship that sails in space!) in, you will come across various hidden objects that have been scattered around. A reward for frantically clicking / interacting with the world around you isn’t uncommon, but the decrypting part that follows is something that is new and fun, especially in the indie gaming world.

When you discover an object that presents words in ‘Ancient’, the game then takes you to a new screen, showcasing the ‘Ancient’ word and then provides you with a multiple choice range of English words. You are tasked with finding which word fits where and (hopefully) translating correctly. Naturally, you are rewarded for getting it right and in-game second guessing if its not 100% accurate. Most in-game characters have been rendered in 2D but have a weird ghost / floating apparition vibe to them, as the character models begin to fade from around the knee down. A strange choice, as you kinda get the sense of ‘Do any of these other people really matter to the story?’.

Having said that, the worlds are very impressive. Alot of thought, colour and detail have clearly gone into the art for Heaven’s Vault and it pays off in a big way. I don’t know what it is about 2D characters roaming around a 3D world, but It just looks really appealing.

Another very strong visual aspect is the travel system. This has to be the strongest case of visual dominance in Heaven’s Vault. The concept of having a literal ship that can fly through space is genius! The paths that you take to get to other worlds are presented in the form of a clear water / vapor like stream, which is so soothing to watch. The in-game soundtrack is presented well, helping set the tone and the mood for each world and upcoming task. However, the in-game dialogue is seemingly non-existent. A subtitle heavy game is at hand, which given its 2019 and indie games can sometimes knock the big mainstream games off the perch, you can’t help but wonder what bigger effect Heaven’s Vault could have made if a bit more time was allotted to get dialogue recorded

CONCLUSION
Heaven’s Vault is an interesting take on the Adventure genre. Its strength heavily lies in its Archaeology / word decoding aspect, and is complimented by an extremely impressive art design. 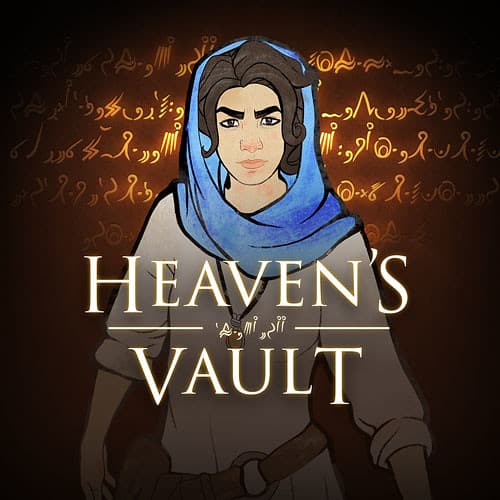