Heist is a noir, cat burglar game that puts you in control of a smooth, trench coat wearing, gadget wielding thief that has no name and no intention to be seen. With stealth as their key weapon of choice along with a variety of gadgets at your disposal it is your job to fool, distract or down right fumble through the variety of cunning guards that stand between you and the prize.

All starting with a with a quick tutorial that get you straight into the game, the overall premise and story of Heist is simple, navigate each level with a variety of guard types and gadgets in your arsenal to utilise in order to steal a specific item. Some are easier than others, but all require a little finesse in your approach. The story though, is not what this game is about, it’s the hunt for the prize that brings the game together. 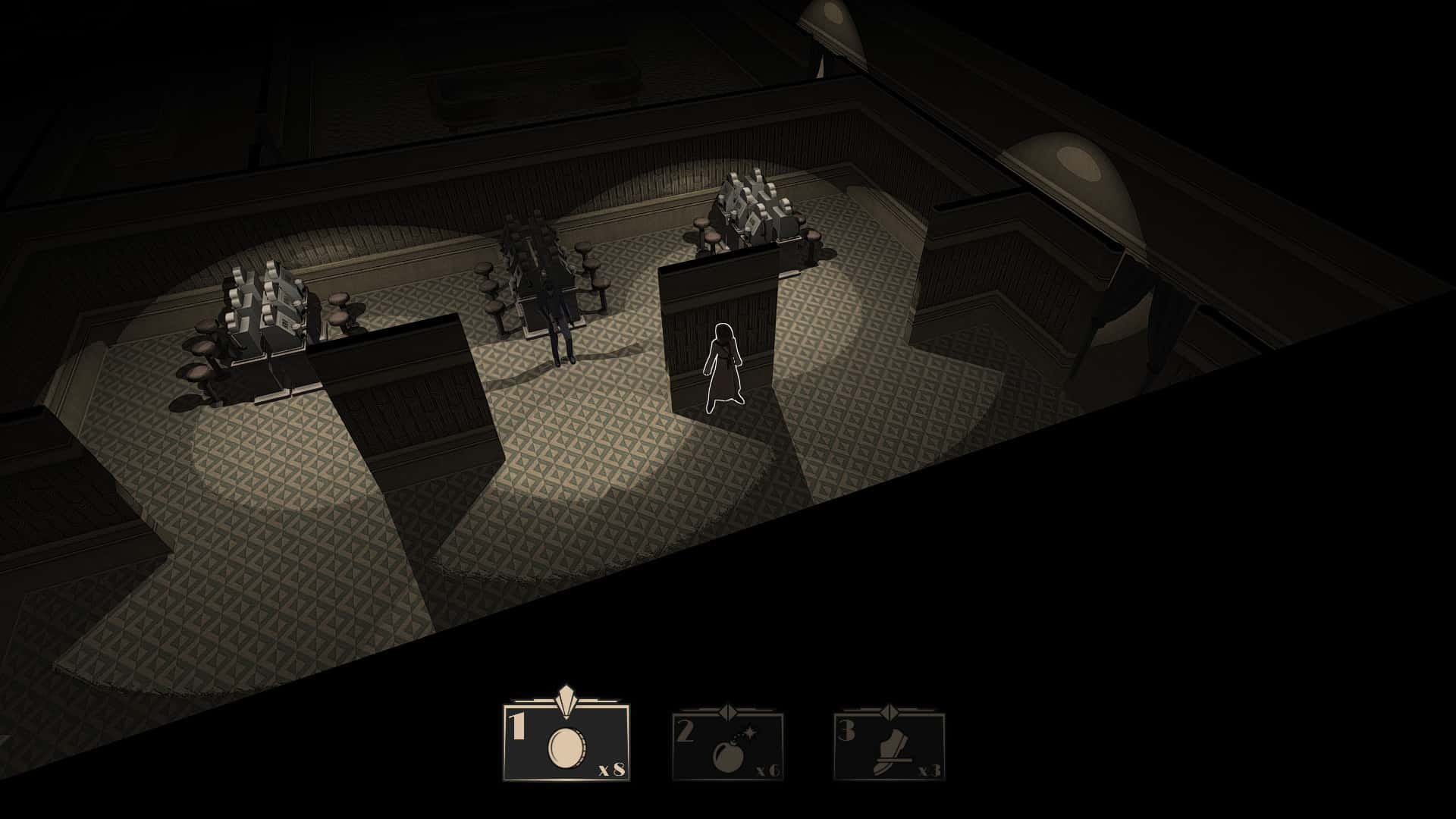 With a timing of a well-placed tripwire, to a smoke bomb to distract a guard in order to sneak past to achieve your objective, with the tools you unlock a variety of playstyles can be achieved. Whether you’re a fast and hard type of player or a slow and steady thinker, mix it up with an open world approach to achieve your objectives and gain your prize.

At times, movement seem a little sticky, with your character attaching themselves to wall, especially when you don’t mean to hide up against them or the camera angle not moving when trying to place a tripwire when being pursued, for example. Other than the movement being inconsistent, the controls performed smoothly. I found however due to a few sound bugs encountered when leaving hiding areas or chase music playing long after NPC’s had given up, that I was thrown out of the enjoyment. 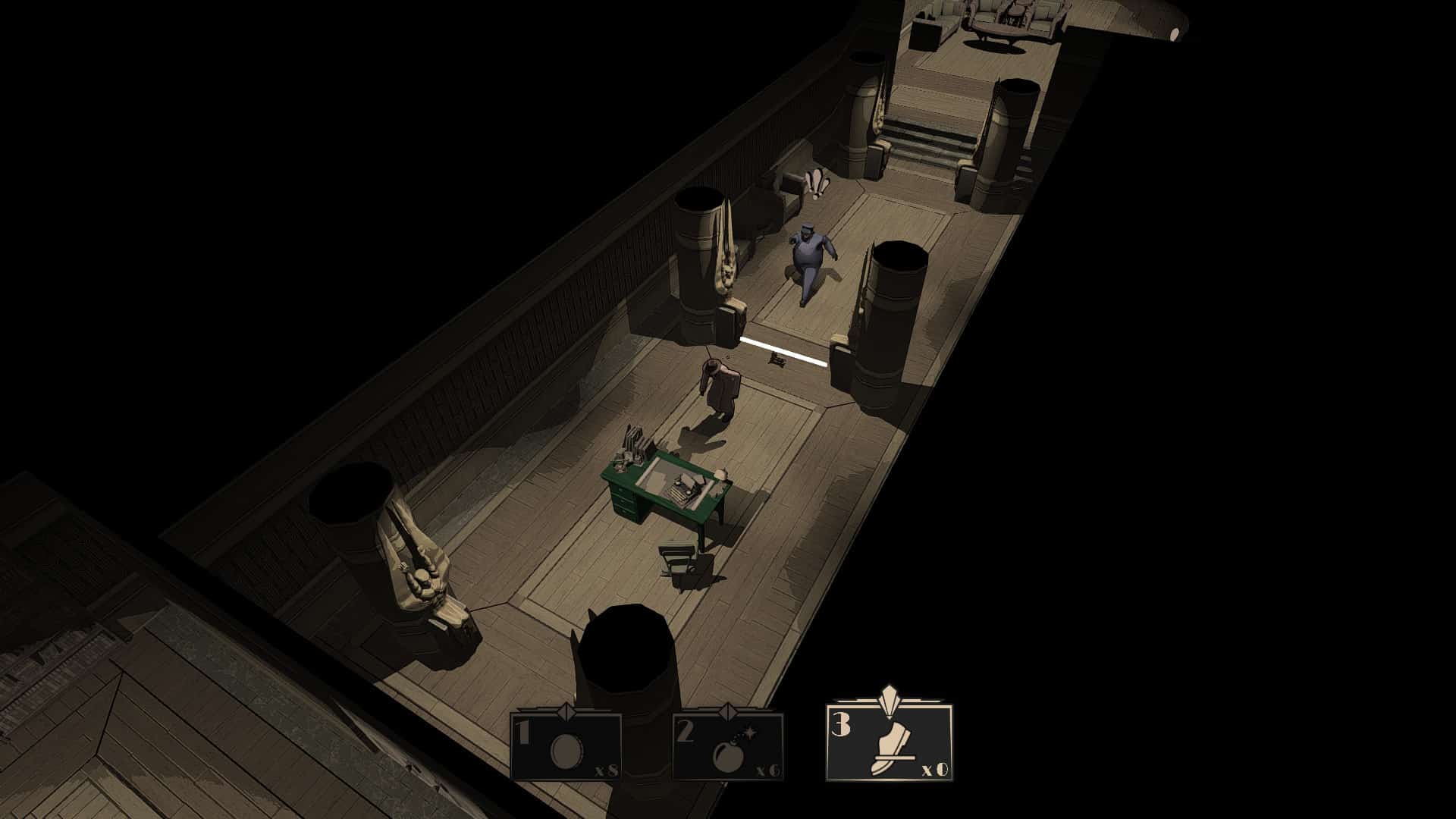 The guards also seemed to be stuck between doorways often, which could be quite annoying especially when that eliminates a potential access to your goal. I’m sure these bugs will eventually be patched and does not seem to spoil the overall gameplay, but it does give a certain level of frustration when these bugs area encountered, especially for the first time and a checkpoint is just beyond that doorway.

Now for something more positive. The theme of the game is what shines most for me with the music and animations being a real highlight. The music is top notch with its smooth jazz that compliments the style and atmosphere of the game design as well as the look and feel of the animation. Everything from the style of the protagonist to the variety of guards everything looks absolutely smashing. All of it breaming with a feeling of the era that truly shines.

Overall, Heist brings to the table an enjoyable romp into a world of Noir cat burglary where every challenge is interesting and gives an option of replay ability. Other than a few bugs that were encountered, when everything goes right you can be walking out of there like a smooth operator with the perfect background music to show how sly you can truly be.

HEIST is a stealth game set squarely in the age of smooth jazz and organized crime.Pursue infamy as a lone cat-burglar on the prowl for others wealth, and continued freedom. Each step you take brings you closer to your prize, but also within inches of capture. An open-ended approach for your style of play - A stealthy rogue, rewarded for treading softly and planning a route unseen through shadowy corridors; a cunning wielder of subterfuge who discretely sets traps to cause misery and distraction - or a hit-and-run professional whose success lies in causing chaos.