Inferno 2 is an atmospheric, adventure shooter originally released on steam in 2015, and now Radiangames has brought it back for Nintendo Switch, with all the same neon lights and blasting beams as before! Now you can take it where ever you want thanks to the Switch’s portability, your not stuck just playing this on a screen in your house.

Plot wise, this game is basically just asteroids but in a maze environment with its hordes of enemies that charge at you in flashes of neon, while you the player, have to collect drones and a key to progress to the next level. For those of you that don’t know what these games where like in the past, dots where all we were technologically capable with a game in the 80’s, but they are making a comeback with you being hunted down by swarms of them. 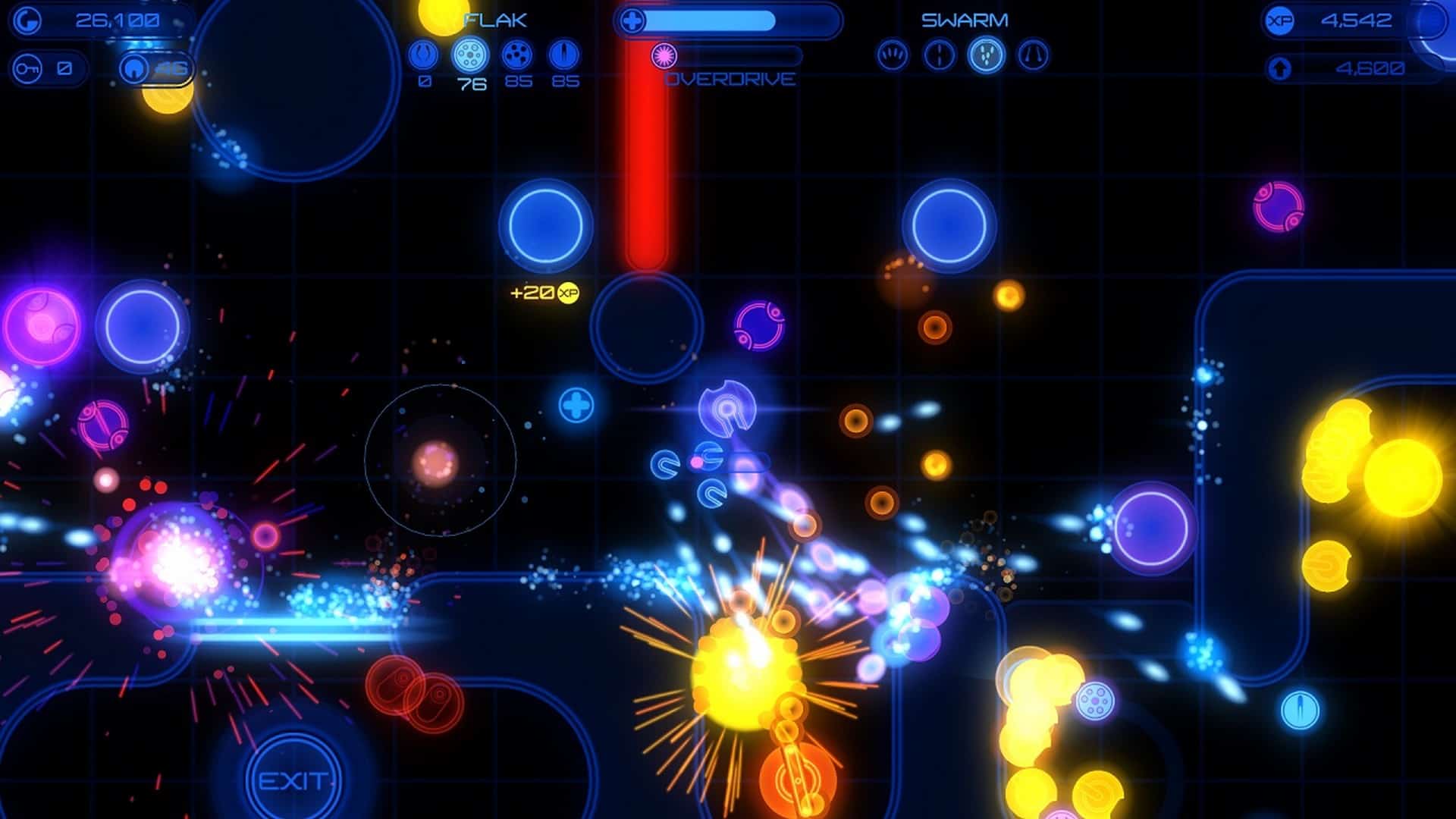 Inferno’s shooting mechanic works really well on the Switch with its twin stick controls strafing and shooting. It’s so responsive zinging about the levels while blasting like a mad man at tiny enemy dots with your slightly larger blue dot. As you collect drones along the way, they will shoot light blue beams while you reek havoc with your own overly powerful beams of destruction. It was nice jumping back into a game that’s brings back nostalgia and made me reflect on a much more simple time in gaming. It was me and my blue and red dots, trying to survive as you traverse each level defending off each waving horde. It is all very classic in style.

Inferno’s neon, retro design is easy on the eyes after play for what seemed like a quick play through, but still even on a long play didn’t ended up with any strain. This game is what you see is what you get. Some will love its simplistic look and gameplay, but most will not be overly amazing unless they really love “NEON RETRO BEAMS OF LIGHT”. 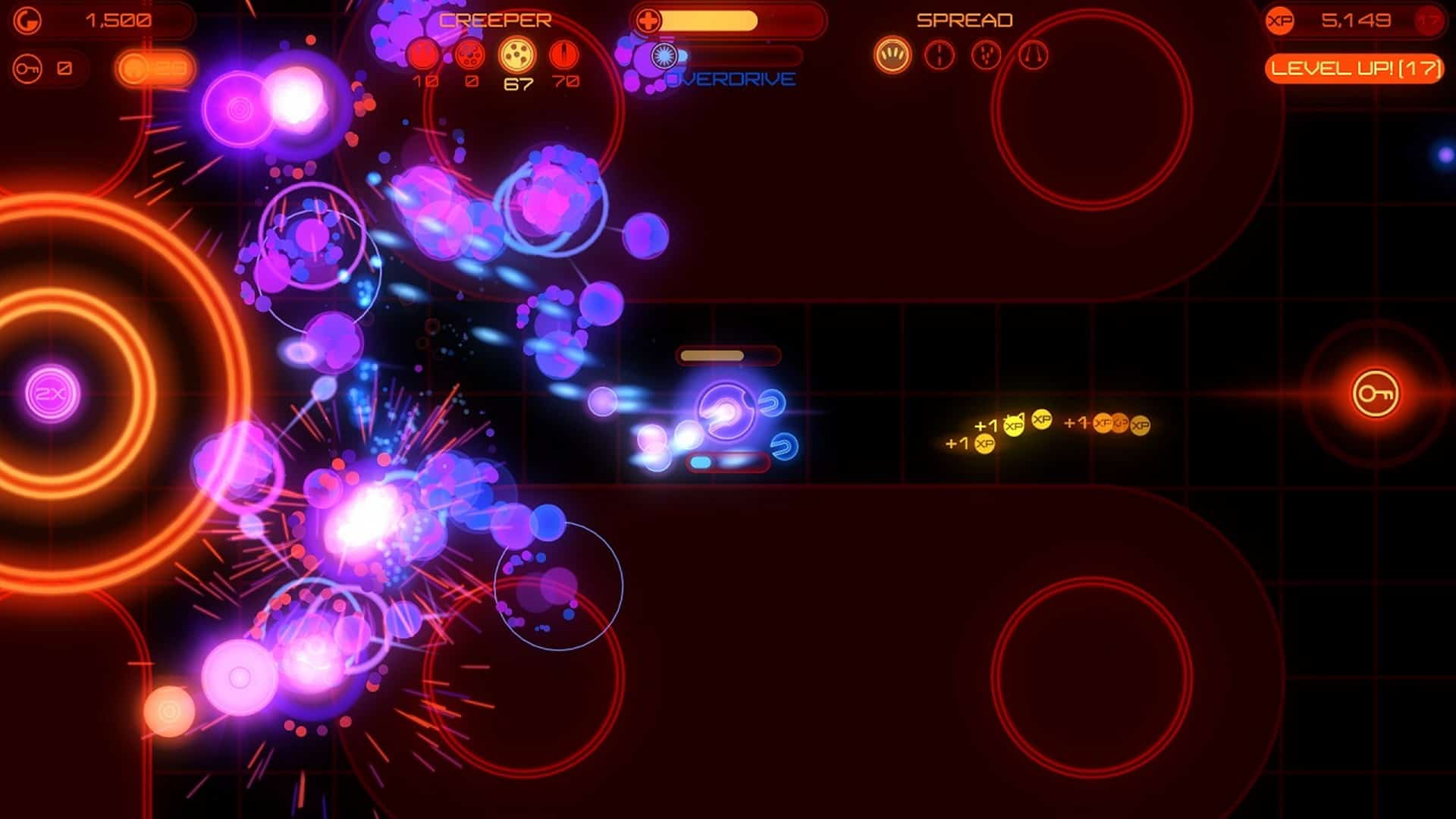 My favorite little tiddly bit of Inferno 2, a highlight if you will, is the music. It straight up reminded me of Tron, it has that futuristic synth-wave vibe. It had that modern yet retro electronic beat that just works so well, you couldn’t help but carve shapes to this Tron legacy.

Overall, I liked this better on the Nintendo Switch than PC as it felt really tacky. I know you can get a controller for PC but the portability of the Switch makes the game shine. Even though the game feels dated at times, it’s a nice flashback and fun to jump into something that feels classic that is trying to draw in a new market. Now, while I do sense a slight identity crisis from this title since alas it is 2019, it is still one upbeat good time. 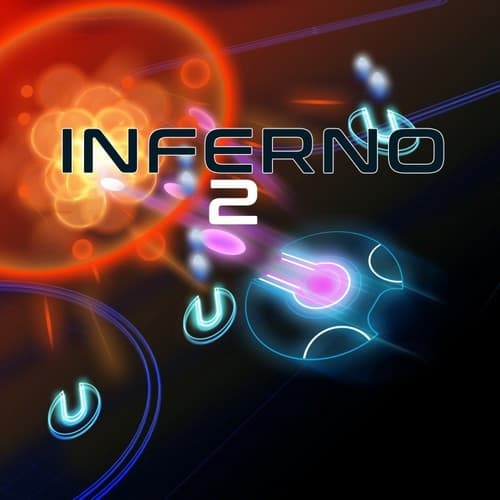 Inferno 2 is an intense, atmospheric twin-stick adventure-shooter. Blast through 80+ levels full of enemies and secrets while upgrading your ship the way you want.