Infinite: Beyond The Mind

Infinite – Beyond The Mind is a little indie game developed by Emilie Coyo and published by Blowfish Studios and is a retro platformer with a futuristic flavor.

The story follows two girls, Tanya & Olga, both connected by their magic powers, sharing a unique bond and abilities between one another. Their powers catch the eye of the cunning Queen Evangelyn and her kingdom of heavily armed forces. Feeling threatened she abducts one of the girls to weaken their bond, while the other must now venture forth on a journey to rescue her other half from the clutches of evil.

Featuring 16 stages, Infinite – Beyond The Mind isn’t anything massive but it offers up so much while playing through. I did find the base gameplay to be quite easy and short and very similar to like games in this genre. It is typically very reminiscent of arcade systems such as ‘Metal Slug’ with its spray of attacks and fast paced side scrolling. It is very ruthless as you run through a stage blasting or attacking with a range of weapons; where this feels more welcoming, it does give you a false sense of security. This won’t last long as you are then face slapped with a boss fight at the end that really up the challenge compared to the stages you ran through. 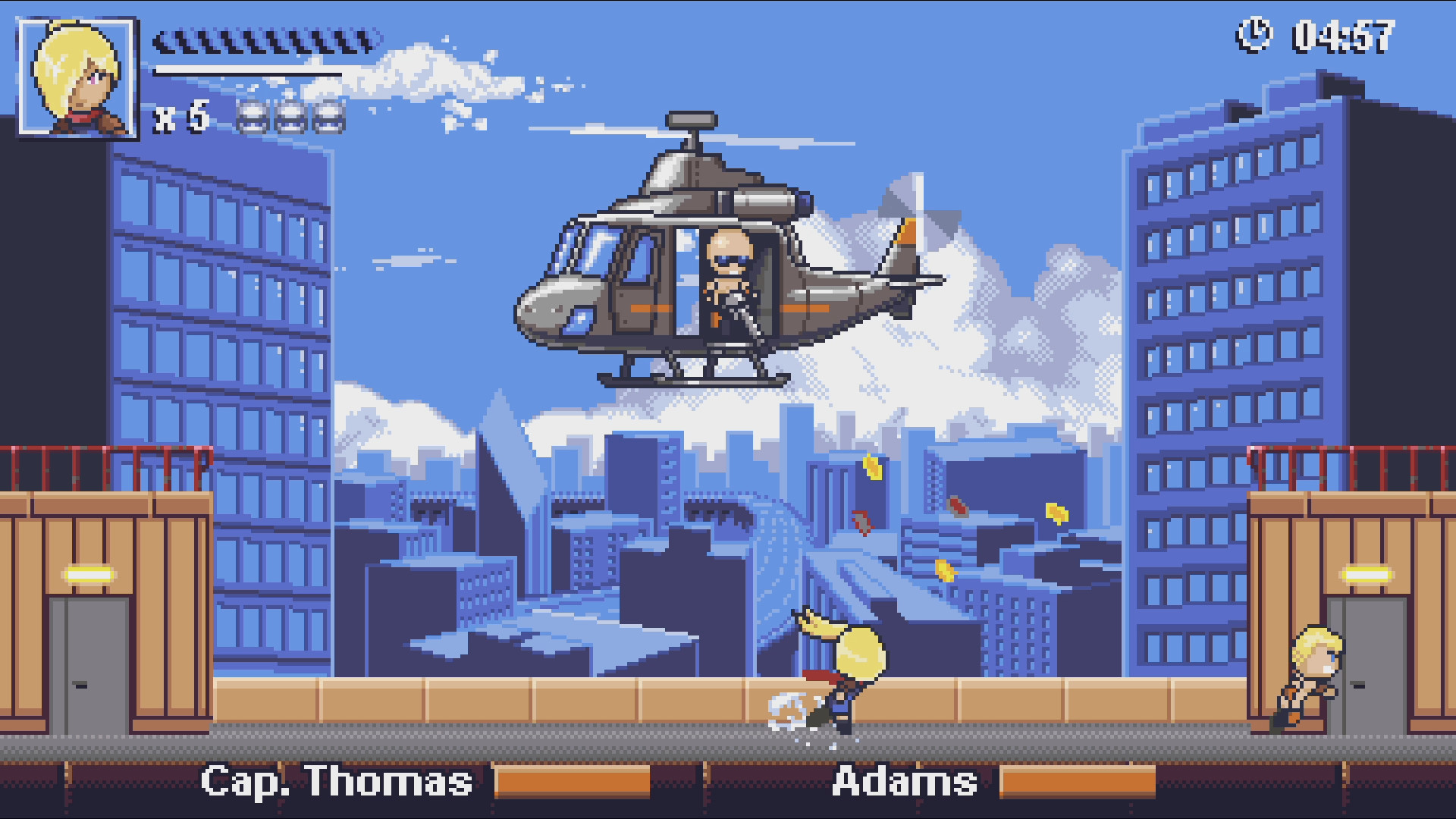 The addition of co-op mode mixes it up a little, putting your friend and yourself in control of both Tanya & Olga. You can play through the same levels/story solo with A.I., on what can be viewed as an alternate experience, playing out that neither of you have been captured and are both set to take down the Beljantaur Kingdom as the ultimate duo.

The game is entirely in pixel art format from the detailed backdrops of the level and vehicles to the chibi styled characters. I did find the characters stood out from the levels as their colours were more vibrant, solid and bold while the buildings and vehicles had more details and depth for pixel art. I was more impressed with the amount of work put into the environment then the characters overall, being someone who has done pixel art themself, I can understand the work put in, and it’s definitely very interesting to look at. 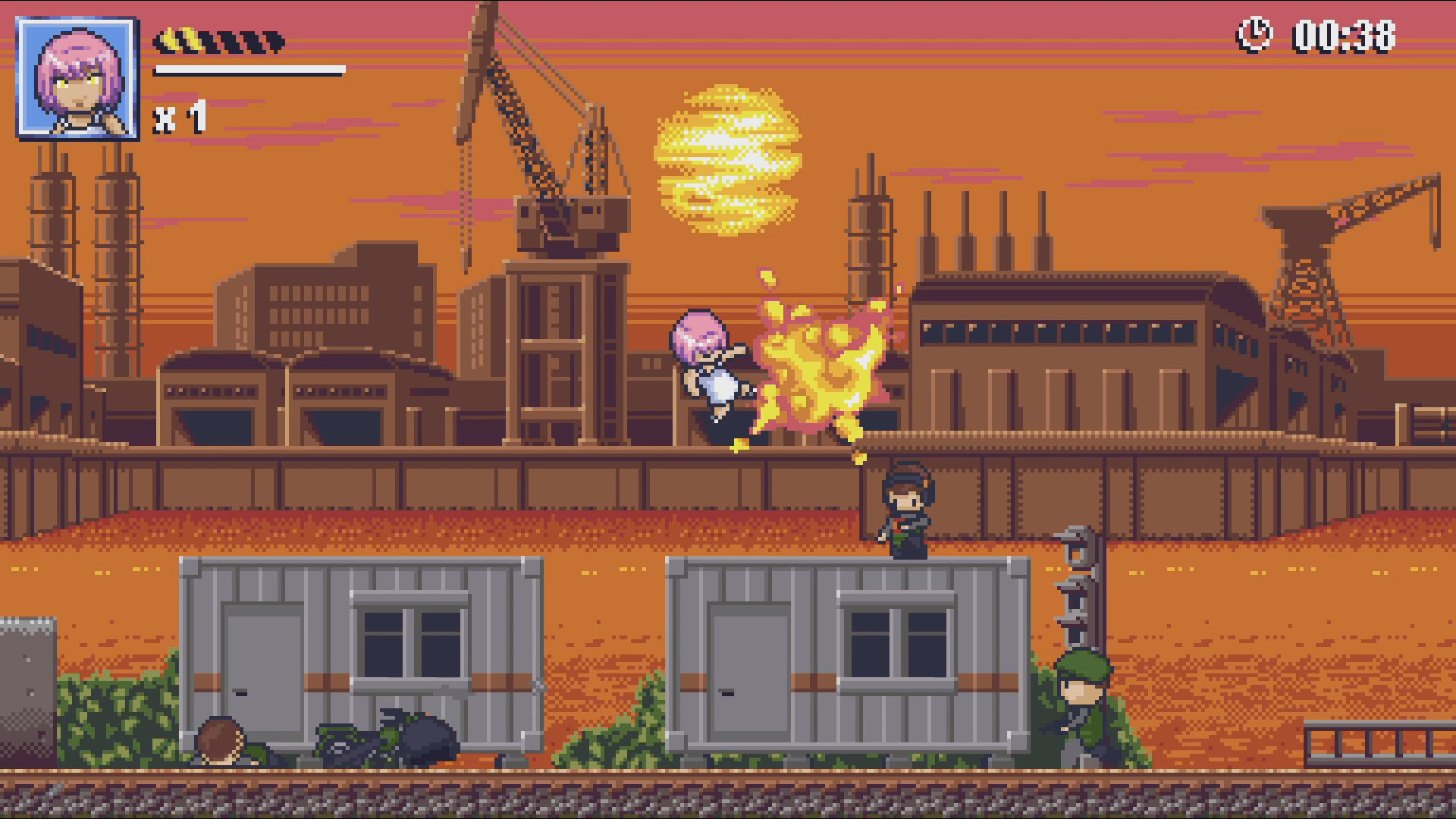 The music for Infinite – Beyond The Mind was composed by Defense Mechanism and they have really captured the atmosphere correctly of the retro arcade feel. The menu is pumping like it would in a real arcade, drawing you in, asking you to feed it a coin and stay there for the long run. Each stage has its own vibe going and they gradually pick up the intensity as you go; the game really evolves as the music intensifies, almost as if telling the story itself.

Honestly playing through Infinite – Beyond The Mind really reminded me of so many different games of the past but had the freshness of something modern. I do wish it was a little longer, however the nostalgia with all those classic design and music vibes had me from start to finish. While I wasn’t a massive fan of the chibi styled characters that just seemed a tad displaced, being made by such a small team that put so much heart and soul into their project’s gameplay and direction really made this game so much more appreciated.

Infinite: Beyond The Mind 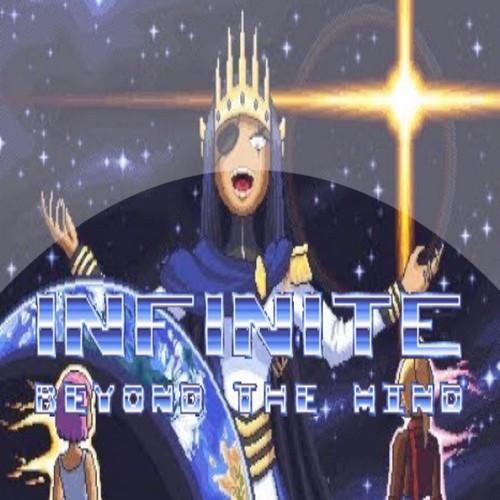 Do you stand a chance against the wicked Queen Evangelyn and her army? You're the last hope to prevent her world domination!