Journey To The Savage Planet

Welcome from Kindred Aerospace! Kindred Aerospace, where you are one of many chosen for the Pioneer Program as a “trained space explorer”. It is your job to explore planets that have been deemed habitable for human colonies by Kindred. You’ve been sent on an expedition from Earth to Planet AR-Y 26, where you and your partner, (yes this game can be co-op) if you have one, must explore the planet and catalogue what inhabitants it may have. While on your Journey to the Savage Planet your ship ‘The Javelin’’ is damaged on the landing and has run out of fuel, stranding your party until you can gather the appropriate resources that can be engineered into fuel, and other materials to repair it. Much like games such as Subnautica and Slime Rancher, this is one title dripping with open world discovery.

The Javelin is your base of operations throughout the game, which comes with a few nifty machines; a 3D printer were you can create equipment from resources, T.V. for entertainment purposes but mainly advertisements, GROB machine which dispenses an edible bio product that you never eat but makes perfect bait and a computer to track your discoveries and messages. 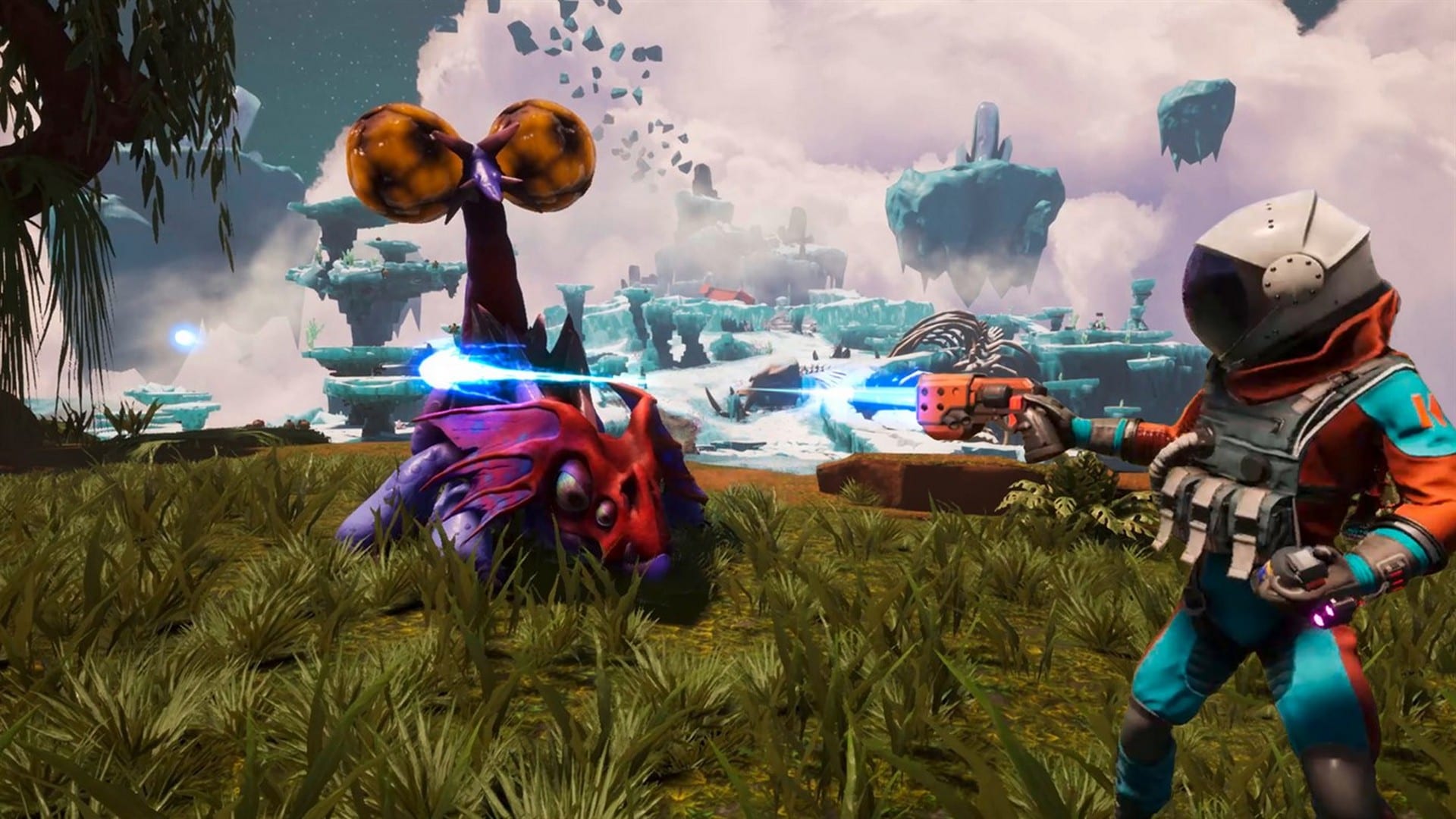 Journey to the Savage Planet has a very unique atmosphere with graphics that are vibrant with psychedelic tones throughout the environment. With weapons feeling like Nerf guns and plants making you want to just eat them whole at first sight the use of bright colours on the majority of AR-Y 26 terrain really draws you in. This works well when identifying important items that you can interact with, some areas of the game also featuring darker contrasted terrains that still work with the aesthetics of a vibrant planet.

The creatures on AR-Y 26 are divided into 2 categories; Predator and Prey, with the latter being the minority. Some creatures appear as plant like species, unable to move but can either let off toxins or devour other creatures. Interestingly, the creatures are vastly different to the next you will soon discover with the exception of the Pufferbirds, which have several variants based upon their environmental habitat.

Majority of the gameplay is based upon experimentation. You are required to scan features to learn or you might decide to jump in head first getting your hands dirty, giving you the freedom to choose. You will learn the easy way or the hard way and if you die trying don’t worry you can be brought back to life, thanks to Kindred’s regeneration machine, just a little less you this time… and each time after (5% to be exact). 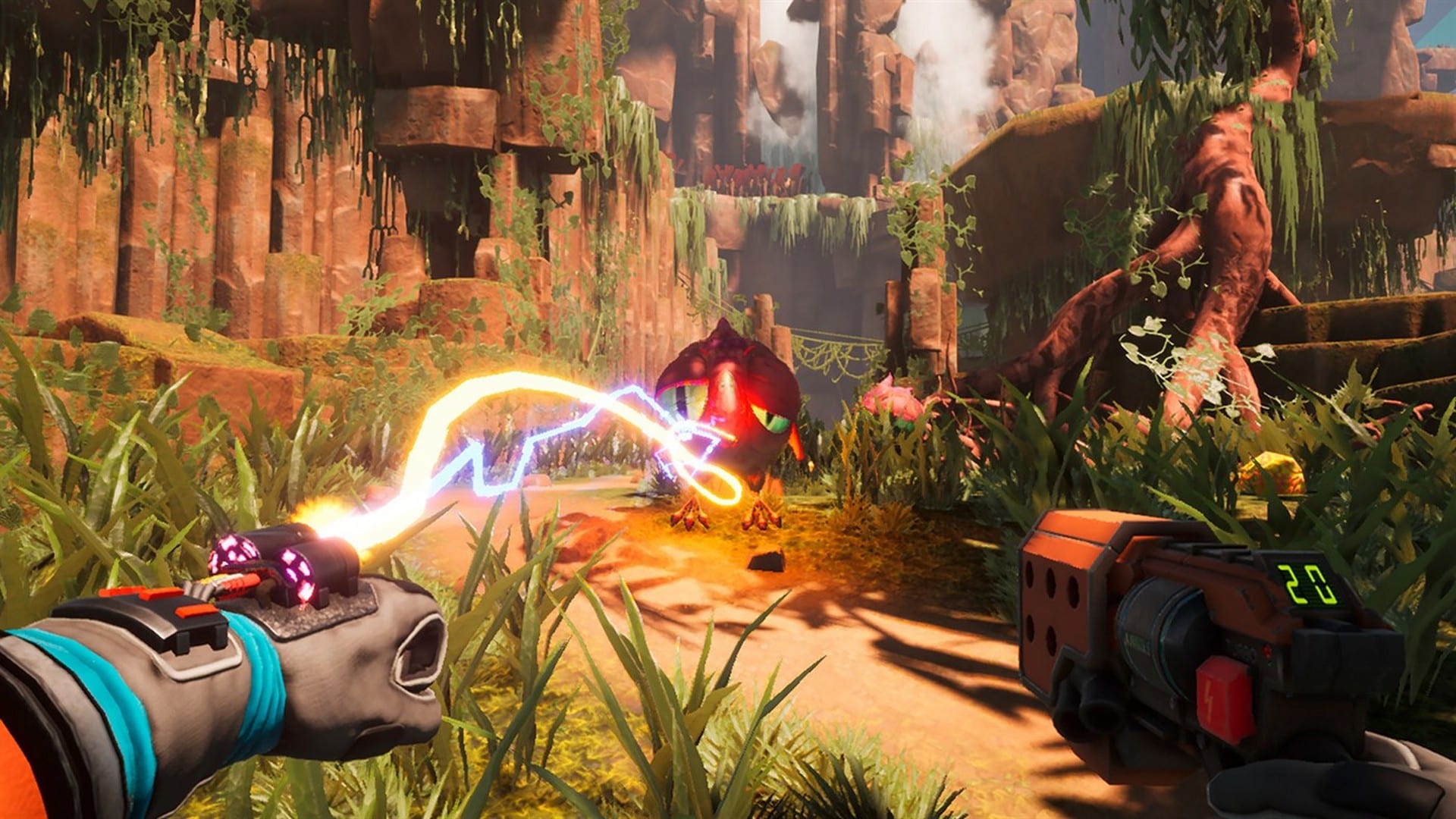 Journey to the Savage Planet’s controls feel quite stock standard for a First Person experience, with a slight twist to some functionality on the console. For example, reloading and melee are bounded to different buttons than normally found in other games, which resulted in me slapping creatures when trying to reload. Funny but not what I meant to do.

The music and audio is also beautifully done, OUTSTANDING in fact, with each area having it’s own musical tone blended with the environment, wrapping it up together nicely. With the whistling air and creatures chirping, to storms growling and monsters howling, the sci-fi beat playing along while you explore, it all just complements so well. The variation between blended country, sci-fi sound effects music, a genre of music I’d never expect and a few other blended tracks as well, could not have asked for anything more fitting?

Overall, I found ’Journey to the Savage Planet’ a very enjoyable and entertaining experience. Just walking around and slapping everything in my path or blasting it away in an explosion of discovery. While there is no real repercussions for my teammate or I other than blowing ourselves up or falling to our deaths. The game features a Co-op option that I didn’t explore much, but it is a very welcomed feature, that definitely means the amazing gameplay can be shared. This game is a definite must play if you are open to a world of bright, charming and endearing exploration.

Journey To The Savage Planet 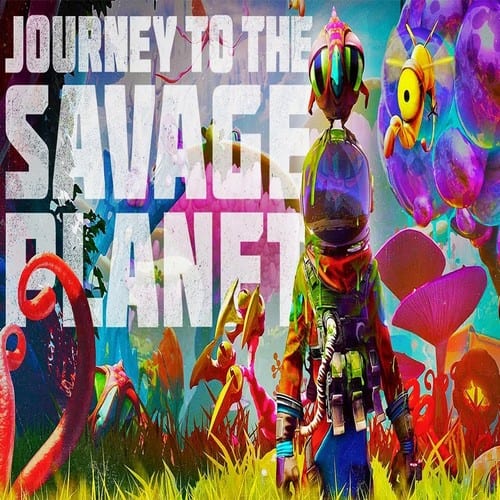 Welcome to the Pioneer Program! In this upbeat & colorful, co-op adventure game you play as the newest recruit to Kindred Aerospace, which proudly touts its rating as the 4th Best interstellar exploration company. Dropped onto an uncharted planet with little equipment and no real...