INTRO
Arguably one of the most addictive indie action games I’ve ever played. EVER! It brings me such excitement to present to you the newly released indie game ‘Katana ZERO’

Akiisoft have absolutely captured the hack-n-slash, side scrolling, action platformer aspect to a T. Katana Zero is addictive, it’s colourful and it creates its own twist on the genre that gives it its own personality.

Without further delay, here we go! STORY
Katana ZERO is set in a neo-noir world, where you are poised as playing a katana wielding samurai. After hacking and slashing your way through the opening scenes, a dream sequence occurs. After interacting briefly with the dream, you snap wide awake with the heading ’10 Days Remain’ greeting you.

10 days to what? What the hell was that dream about?

You then travel to what appears to be your half psychologist half mission giver. It’s unclear whether he’s your boss or just the mission provider who holds rank. Either way, its kind of a quirky arrangement.

Katana ZERO provides interactive dialogue choices during cutscenes too. This can either boost or hinder the gameplay, giving your playable character his own sense of identity. Some of the choices are quite comedic, playing out in the similar back and forth conversations that Keanu Reeves character John Wick may have come to find himself in.

As the game progress, you come to find that everything you have based your current life on isn’t what it seems. The agency you work for has been giving you ‘medicine’, which is why your character has the ability to slow down time and re-live situations by reviving and rewinding time. However, this ‘medicine’ it’s a powerful military drug that is starting to produce more terrible side effects the more the user is exposed to it.

After clearing each stage, the previously mentioned daily countdown timer kicks in, reminding you that you are slowly approaching either your doom or fulfilling your fate. But as your dreams become clearer, suddenly the countdown begins to make sense…

GAMEPLAY
Katana ZERO gameplay consists of your ninja-esque hero being guided through various platform-style maps, as he hacks n slashes his way to revenge. The cool addition to Katana ZERO is the ability to slow down time, helping to show off and decimate accordingly. The bullet-time inspired slow down allows your character to not only move in rapid / slow-mo, but if an enemy happens to be wielding a single shot gun, then you can simple slash the button and watch it travel back right into their face!

There are various pickups available throughout the world too. These can range from smoke grenades that can temporarily fill an area of the level with smoke, causing your enemies to lose slight of you momentarily. Weapon pickups are available too, ranging from Molotov cocktails, to butchers knifes to old timey swords, causing an instant one-hit kill on your enemies.

The fact that there is no health bar is a welcome additive to Katana ZERO. Upon dying, the game presents you with text reading: “No, no that won’t work.” The game then asks you to restart, presenting a VHS style rewind feature. The game begins to rewind time, sending you back to the beginning of the level. But, in doing this, it actually turns the game black and white, with a VHS tape rewinding sound accompanying the visuals, whilst ACTUALLY REWINDING YOUR PROGRESS THROUGH THE LEVEL!

CONTROLS
The controls are dependent on the A, S, D, W keys, CTRL, Space bar and mouse. After being guided by the opening tutorial, these controls remain basically the same throughout the entire game. There are options throughout the game that allow you to slow down time, throw weapons, interact with the scenery and crawl/crouch/sneak.
Keeping the control keys basic throughout the game really does help to give Katana ZERO a sense of familiarity, thus opening it up to allowing you to have more fun whilst not struggling to remember how to attack.

The only thing that may hinder Katana ZEROs performance is that fact that the mouse is your aim. With such fast pace action, the mouse sometimes becomes overly sensitive and can send your attacks hacking the air around you, rather than the enemy in front of you.

Just like the PC version,on the Nintendo Switch, it’s one of the most addictive, hard to put down games I’ve played since Breath Of The Wild came out. The Controls on Katana ZERO on the Switch are super easy to get used to, which makes for some of the most amazing action/kill sequences ever. I dove straight into this game and didn’t stop, rewind after rewind after rewind…arghhhh, this mechanic is certainly the shining star. OK I’m good now. Katana ZERO played beautifully and looks amazing graphically whether it be docked into the T.V or in handheld. In my experience though, I preferred it handheld with a controller, as it just makes for quicker reactions and sharper graphics. I can see myself playing this again and again until the next ‘Legend Of Zelda’  is out!   – SCORE: 4.5 / 5.0 (Nintendo Switch) GRAPHICS + SOUND
Digging deep into the archives of time and pulling out the colourful 8-bit inspired retro grade design, Katana ZERO pays homage to the side-scrollers of yester-year, bringing back the nostalgic colours, tones and designs of classic side-scrolling action games like Metal Slug and more recently Scott Pilgrim vs the World.
Having the VHS style playback feature is a treat, too. Such a simple but effect idea! It does wonders in giving you a nostalgic boost, whilst making you kick yourself at dying at a specific point, only to have to watch all your level progress be rewound and started over again!

The soundtrack is amazing too! At the start of each level, your controllable player whips out a Walkman, shuffles through his list of tracks / tapes, before hitting play and allowing his chosen tune to compliment the forthcoming level and action. Again, such nice and neat little details really add some much depth and character to this game.

CONCLUSION
Katana ZERO is hands down one of the best and most addictive games I’ve played this year. It’s fun, it’s simple to pick up and play, it’s nostalgic and it’s just a joy to be immersed in its colourful world and in-depth storyline, giving a massive boost to its genre. 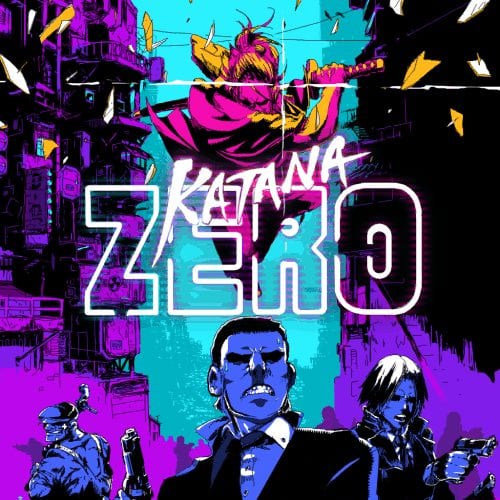